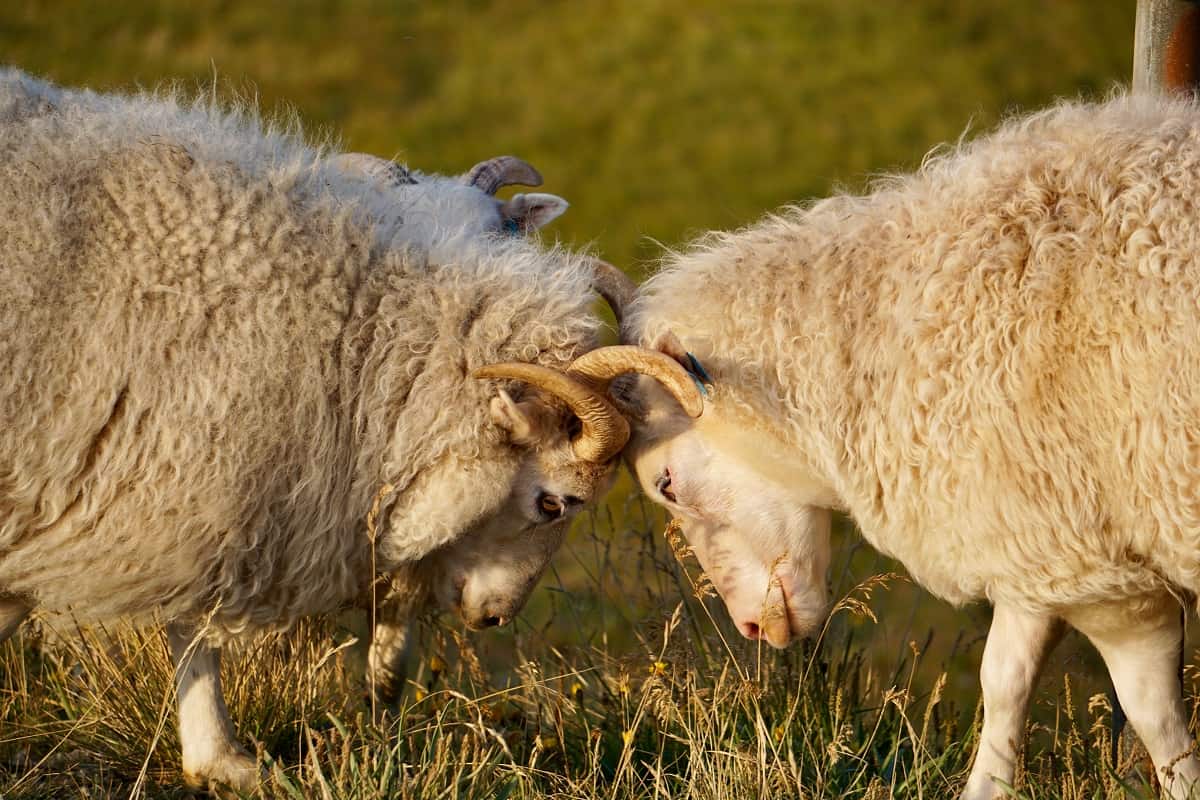 We’ve been fortunate in that, within our years of sheep farming, we have rarely had to deal with aggressive rams.

Before I go any further, note that I’m talking about rams – mature male sheep – and not wethers, which are younger, castrated animals. These tend to be less aggressive since they don’t have all that testosterone coursing through their veins.

Rams, on the other hand, have a reputation for being a bit on the ornery side. There are all kinds of stories about shepherds being injured (or even killed) by aggressive rams.

Fortunately, this isn’t something we’ve had to worry about. Our two breeding rams, York and Thor, are about as friendly as can be. York is the only sheep in our flock (including even the ewes and lambs) that will tolerate us petting him, in fact!

That said, I also know better than to turn my back on either of the rams – especially during November or December, at the height of the breeding season.

Rams can be dangerous – but knowing how to prevent and deal with aggressive rams can help you stay safe.

Rams have typical behaviors that you might expect to see daily. The more you interact with your sheep, the easier it will be for you to track and predict these behaviors, aggressive or not.

More often than not, aggressive behavior is related to breeding. These are normal and associated with sexual behavior. Of course, some rams are more docile than others, even at the height of breeding.

Some signs of aggression you might notice during this period include head butting, charging, gurgling noises, pawing at the ground, and nibbling, but these behaviors can, again, vary between rams.

There are lots of variations in aggression among rams – no two rams will be alike. Some ram aggression is genetic while some are related to the breed. Many times, the extent of aggressive behavior will be determined or influenced by how a ram was raised. Rams who are fighting for limited resources – including ewes, if you have multiple rams together during the breeding season – may also exhibit more signs of aggression.

That said, even without these factors prescient, it’s important to note that any ram has the potential to be aggressive.

Tips for Dealing with Aggressive Rams

Knowing and predicting ram behavior is the single most effective way you can minimize your risk of injury at the hands (horns? hooves?) of a ram.

While it might sound obvious that you shouldn’t push or shove a ram into submission, many people don’t realize that petting can lead to aggressive displays, too. The caveat here is that you should avoid petting your rams on the head, which can encourage head butting – petting elsewhere is usually okay. Pushing a ram’s head will be seen as a sign of aggression.

Similarly, you should not hand-feed rams, as this can encourage them to become aggressive around food.

If a ram happens to charge you, get out of the way to the best of your ability. Some people recommend waving a large stick or shouting (or even walking toward a ram, which can help show your confidence and reduce the likelihood of a charge). Other “wisdom” says to wrestle the ram to the ground by grabbing him by the horn and swinging him in a circle.

However, these are risky maneuvers that could wind up hurting you.

Instead, it’s best to avoid a charge by keeping your eye on the ram at all times. Watch for “pre-charge” signals, such as the ram backing away, pawing the ground, or making vocalizations. If he lowers his head, that means he is about to charge – keep your head upright so that he does not view you as an opponent.

Generally speaking, a ram won’t charge because he’s more afraid of you than you realize. He will instead go out of his way to avoid you.

However, if he views you as a rival – or if you have him backed into a corner – there’s a good chance that aggression is going to rear its ugly (ram) head. Leave your ram alone 95% of the time and only handle him when necessary.

Socializing your rams early on is important, both with other sheep as well as with you and other members of your household.

If a ram is orphaned, you must transfer him to another ewe whenever possible (rather than bottle feeding). This will help your ram develop social skills within the flock and not become overly reliant on you as a leader.

You might think that a ram who is docile and friendly as the result of hand-feeding is the safest to have around, but in reality, these kinds of animals can be the most dangerous. They have no fear of the shepherd and don’t maintain a flight zone distance.

4. Use Panels and Handling Chutes

While avoiding your ram at all costs sounds like a great idea, the fact of the matter is that you are still going to need to work with your rams now and then. There is shearing to be done, dewormers to be administered, and hooves to be trimmed, after all.

To facilitate the easier, safer handling of rams, consider investing in panels and handling chutes. This will make moving and working with your sheep a much less stressful process and can minimize the risk of aggressive behaviors.

This is a point that is a subject of disagreement among shepherds. Some people believe that selecting friendlier rams when they are lambs is a good idea, as they are less likely to act out as adults. Others argue that friendly lambs are more likely to be aggressive as adults.

Either way, it’s important to consider your flock dynamics when selecting the best sheep to keep for breeding stock. Choose rams that interact well with the rest of the flock – not just with you.

6. Do Not Turn Your Back

Never, ever turn your back on a ram – even if he seems friendly and docile.

Always keep a close eye on your rams when you are working near them in the pen. You may have to consider keeping waterers and feeders so that they are positioned just inside the enclosure. That way, you can fill them from the outside of the pen and minimize the time you need to spend trapped in the pen with a ram.

Unfortunately, in some circumstances, the only thing that can be done to minimize ram aggression is to remove the ram from the flock.

Some producers will simply sell their rams to other farmers, but this solution can be a bit dodgy. If you don’t disclose the hostile nature of the animal, it could cause the buyer to assume the risk of injury.

Are All Rams Aggressive?

Not all rams are aggressive. In fact, we’ve never had a scary experience with an aggressive ram – and I hope that always remains the case!

That said, I’m not planning on getting cocky any time soon. Never trust a ram and never turn your back on him. Always know where he is when you are working around him and minimize the time you spend doing so, particularly during dangerous seasons of the year. Of course, you shouldn’t let any children in the pen with a ram, either, especially if they aren’t being supervised.