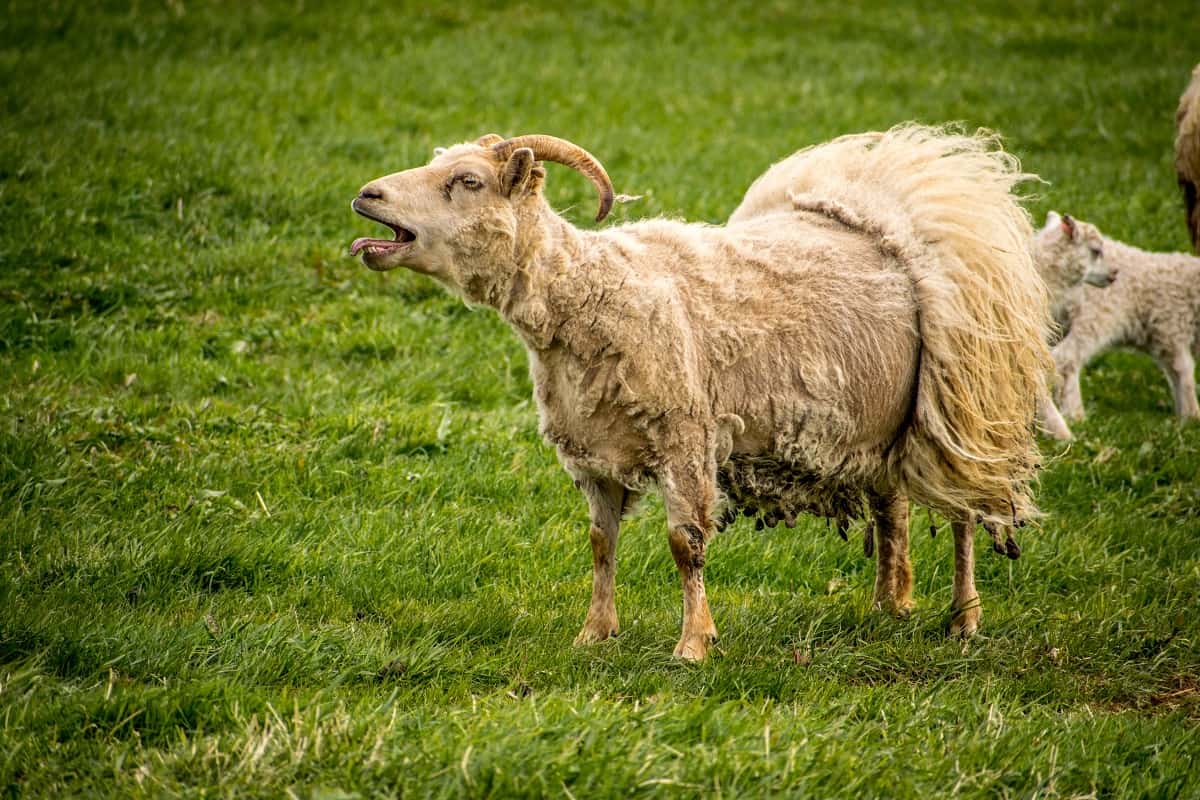 In the last few years that we have raised sheep, we have always been careful to shear them in the late winter or early spring, just before lambing.

We have always been told that this is not only a good idea if you want them to grow attractive, healthy wool but also because it’s necessary to prevent them from overheating and suffering from flystrike.

What we didn’t know then (but fortunately do now!) is that shearing is not necessarily for all breeds of sheep. Sure, there are hair sheep that shed their hair at the end of winter to stay cool throughout the summer.

However, there’s also a breed of sheep that doesn’t shed in the way that hair sheep do – but also doesn’t require regular shearing.

The name of that breed is the Icelandic.

Here’s what you need to know about rooing as it relates to Icelandic sheep.

What Does it Mean to Roo a Sheep?

Although the word “roo” brings to mind images of adorable baby kangaroos in the Australian Outback, it actually has nothing to do with Australia at all.

You see, Icelandic sheep wool is unique from other types of wool in that it contains two different types of hair. The outer layer is the thick, coarse, and long hair, known in Icelandic as “tog.” It tends to be water-resistant.

Beneath the tog is a layer known as thel. This layer is much softer and offers more warmth.

During rooing, it is primarily the tog that is shed, although the thel can be shed, too.

When Should I Roo My Sheep?

Rooing is a process that must be naturally initiated by the sheep first. The fleece will typically start coming off on its own, generally in the spring, and often in patches.

Rams tend to shed first and you’ll know that spring is in sight because you’ll see your rams rubbing their bodies against anything they can find. They’ll scrub themselves against trees, fences, or even each other to relieve the itchiness and shed the extra wool.

Often, this is all that is needed to drag off large patches of felted wool. However, you can also hand pluck an entire coat if you’re so inclined.

If you choose to roo your sheep, you should do this in the late spring. Wait until lambing has ended as most ewes will not start to shed until after they’ve dropped lambs (though some will start right before).

Rooing is a simple process – just walk up to your sheep and take your fingers through the wool. As long as the timing is right, it should come off in your hands. You shouldn’t have to do any yanking or tugging – just a gentle pull is all that’s needed. Most people discard the wool they “harvest” via rooing as it can be hard to get a piece of wool large enough to work for spinning.

It can also be time consuming, so if you’re okay with allowing your sheep to look a bit patchy for a while – and don’t mind wads of wool floating around your pastures – then you might have to allow them to shed freely on their own terms.

Which Sheep Breeds Can Be “Roo-ed”?

Icelandic sheep are among the most famous of the sheep breeds that can be “rooed.” Some sheep producers report that similar breeds, like Dorpers, St. Croix, and Katahdin may also be able to be rooed.

However, this trait isn’t overly common and is something that is often bred into a flock over many generations.

Do You Have to Roo?

As I mentioned earlier, rooing is not absolutely necessary.

The sheep will pull the wool off themselves. The only reason why many people roo is to avoid having wool floating all around the farm. It can also improve the aesthetics of your individual sheep, making them more attractive to look at.

Furthermore, rooing can be helpful when the weather turns hot before your sheep have fully shed their outer layers of wool. Too much excess wool can be itchy and uncomfortable for your sheep and rooing them can often help.

Other Tips for Rooing

Here are some other pointers to keep in mind if you are considering rooing your sheep yourself (or want to allow them to do it naturally).

1. Some Individual Sheep Roo Better Than Others

Although our flock of sheep is composed solely of Icelandic’s, each one is an individual when it comes to how quickly it sheds its wool (and in what kind of pattern).

For example, our 1-year-old breeding ram, York, has already lost most of his wool. However, he looks like the victim of a bad haircut. The wool has broken off in large patches with certain halos hanging on here and there.

Other sheep still have a full coat of wool, while one young ewe has shed all of her wool, seemingly in one fell swoop, and now just has a nice, attractive layer of the remaining.

2. Stress Can Cause “Enhanced” Rooing

Alopecia or wool slip is a legitimate concern among sheep producers – and it’s something that can be caused by added stress. However, it’s important to note that stressful conditions can influence a wool break much faster than normal. It’s nothing to worry about.

Situations like stressful lambing and pneumonia can cause a sheep to lose her wool much faster.

While it’s important to do your best to mitigate stress in your flock and to keep your sheep healthy, know that in most cases, a ewe that roos quickly will likely still be fine.

3. Wool Will Come Back In

Although your sheep will probably shed all of their wool by the middle of the summer, at the latest, don’t worry. It will grow back. If you want to shear just once in the fall, this pattern will enable you to do so. Generally, the wool grows back as the weather starts to cool down.

4. Limited Shearing May Still Be Necessary

A final note regarding rooing – it might not be the answer to all of your flock management needs. In many cases, limited shearing might still be necessary (so you’re not off the hook just yet!). For example, we still shear sheep in the early spring but just practice something called crutching.

In crutching, we just cut the wool around the back end and udders of our ewes. This is done to aid in the lambing process and to help prevent flystrike.

You may find that individuals in your flock need a bit more shearing than others, depending on how well they lose their wool on their own.

I used to hate raising sheep. This was primarily because of all the work involved in shearing a flock of 50 skittish sheep in late spring.

Rooing has helped me rediscover the joy in owning sheep since it almost completely eliminates the need to shear.

Each flock will differ in terms of its ability to shed its wool. However, you may have to consider raising a breed like the Icelandic if you’re interested in raising dual-purpose animals with no need for shearing.

Trust me on this one – it’s something that is truly amazing to witness (albeit a bit messy in the spring!).