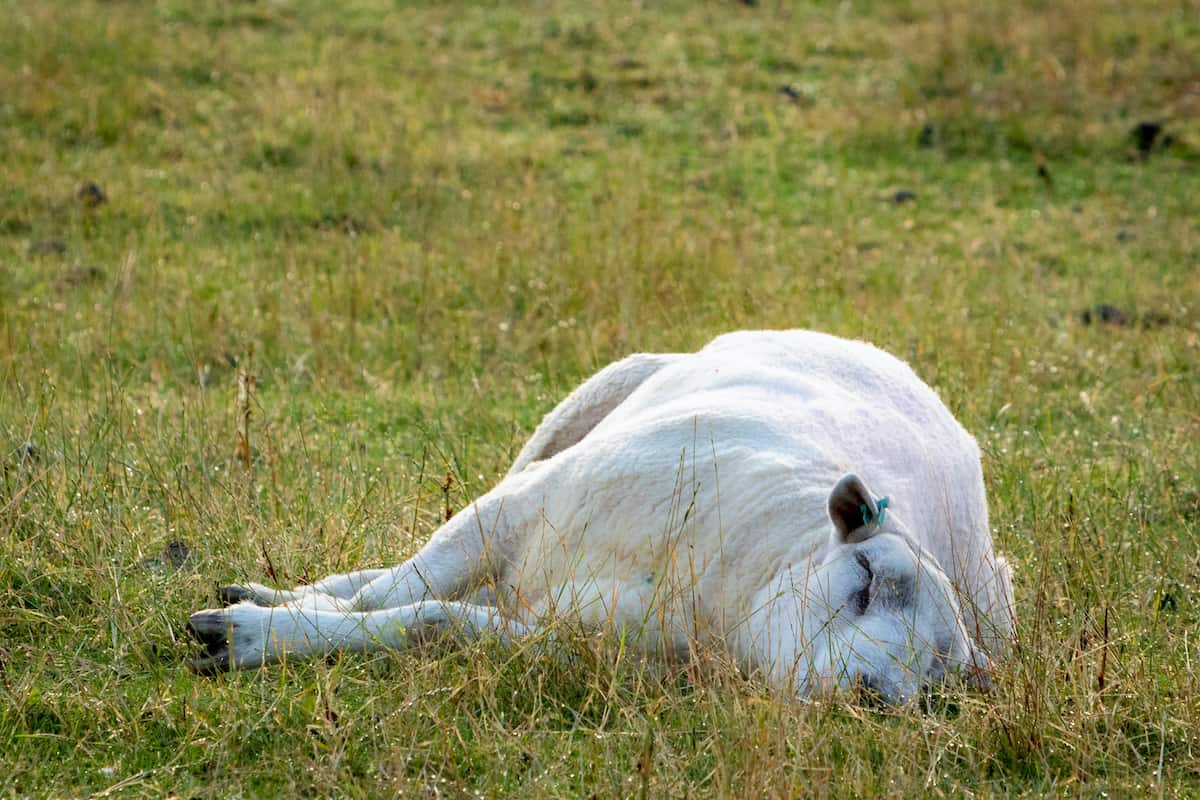 Bloat – that puffy and uncomfortable feeling from eating too much at that holiday potluck, or perhaps you drank a few too many sodas. Although bloat is something that’s unpleasant to deal with, it’s ultimately not going to kill you.

Unless you’re a sheep, that is.

Bloat in sheep is a lot different from the “bloat” you and I might be aware of. It presents several symptoms and can be detrimental to sheep of all ages.

If you raise sheep, it’s imperative that you know the signs and symptoms of bloat so that you can deal with it if it occurs in your flock – and so you can prevent it from happening in the first place.

There are several types of bloat that can affect your sheep.

Also known as grain overload or acidosis, grain bloat can occur with all kinds of ruminating animals. It’s especially common in sheep, however.

As you might expect from the name of the illness, grain bloat occurs when sheep (or cattle or goats) are fed large amounts of grain in particular. Grain releases carbohydrates into the rumen and it ferments instead of going through the natural digestion process.

As the food ferments, it produces gas quicker than the sheep can process it.

Grain overload is the most common with barley and wheat but it can also occur with lupins and oats.

It’s important to note that all sheep can bloat to a certain extent on any kind of feed. However, it can also be more severe and cause major problems.

Frothy bloat is another kind of bloat that can affect your sheep. Also referred to as pasture bloat, this kind of bloat is mostly seen in the spring when sheep move to lush, legume-dominated pastures, or pastures with clover and alfalfa.

The gas will be trapped in foam in the rumen, causing it to expand, mostly on the left side.

As the rumen expands, it can restrict blood flow, interfere with breathing, and displace internal organs.

Symptoms of Bloat in Sheep

When bloat occurs, it should always be treated as an emergency situation. There are several symptoms of bloat to be aware of.

For starters, know that nursing lambs rarely bloat. It can occasionally occur, particularly when super-rich milk causes acidosis, but it’s uncommon. In bottle-fed lambs it is more common, but still not as likely as in older animals.

Often, shepherds don’t realize that their sheep are suffering from bloat until the sheep are already down. When sheep lie down on their sides and are reluctant to get back up, that’s a sign that bloat could be the culprit. It can be an indicator that your sheep are dehydrated and that their digestive processes have slowed.

Some sheep will have a distended left abdomen or stop eating altogether. They might start bellowing, kicking at their own abdomens, or suffer from respiratory distress, too.

You may notice that your sheep suffer from diarrhea, a depressed appearance, or severe thirst and dehydration, too. Occasionally, sheep will demonstrate an odd stagger when they walk or may have a rigid stance.

Unfortunately, some shepherds don’t know that their sheep are suffering from bloat until the very last minute – until the sheep die.

As mentioned earlier, grain bloat is most common with barley and wheat, but it also happens with lupins and oats. There are several factors related to the processing of these grains that makes grain bloat more likely, too. For example, crushing it with a hammermill increases the release rate of carbohydrates, making acidosis more likely to occur.

When planting your pasture, consider planting non-bloating legumes like crown vetch, fenugreek, lespedeza, and birdsfoot trefoils. You can also grow mixed pastures of grasses and legumes with legumes comprising no more than half of all available forage.

If you must graze your sheep on legume-dominant pastures, don’t do so (or limit access) during early bud and vegetative stages. Try not to turn your sheep out when the pasture is moist, as water can increase the chances of bloat.

One of the easiest ways to prevent grain bloat, in particular, is to act slowly and methodically when it comes to adjusting feeding routines on your farm. Grain bloat often occurs when sheep are suddenly fed a lot of grain (or only grain) when they were used to eating only hay or pasture.

The same issue can arise if you change the type of grain they were eating or if you stock grazes freshly harvested paddocks. Sometimes, sheep get into grain without you necessarily intending them to – we have had this happen when a few sheep broke into our chicken coop and feasted on chicken grain.

You can’t prevent all emergencies, but do your best to change a diet over a long period rather than making abrupt changes all at once.

Make sure your sheep are up to date on their pulpy kidney vaccinations. Pulpy kidney, or enterotoxaemia, is most common in unweaned or weaned lambs. It often co-occurs with grain bloat, as it is caused by a bacteria buildup that occurs when sheep are suddenly changed to a high carbohydrate diet.

5. Use an Anti-foaming Agent

You may want to use an antifoaming agent if you think your sheep are at risk of bloat. This is an oral product that can prevent bloat but keep in mind that these do require a veterinarian’s prescription.

Rather than feeding your sheep solely on grain, make sure you offer plenty of roughage. Make sure you have a high-quality source of silage or hay available at all times and that it comprises at least a fifth of their daily ration. This will help improve your sheep’s digestive health and keep things running properly.

How to Treat Bloat

Without a doubt, preventing bloat is much easier than treating it. You will have to work closely with a vet to come up with a treatment plan, since treatment often varies depending on the age of your animal and how severe the grain bloat is.

There are several treatments your vet might offer, but ultimately, it’s going to take time. After a grain overload, the lining of the rumen needs up to six weeks to repair itself. As a result, you’ll find that your animals have a poor rate of growth during this time.

Some treatments – aside from just time – that a veterinarian might use include intravenous fluids and drenching with a bicarbonate solution. They might also drench with milk of magnesia or give an antibiotic injection to improve the rumen health. Sometimes, steroid injections or injections of thiamine are used.

In severe cases that are affecting very valuable animals (like breeding stock) your vet may want to do surgery.

Rule Out Other Diseases

To make matters even more complicated, there are several diseases that present similar symptoms to bloat, particularly grain bloat.

These include salmonellosis, pulpy kidney, hypocalcemia, lupinosis, pregnancy toxemia, and more. Some of these diseases, like pulpy kidney, frequently co-occur with grain bloat, in particular, too. Treatment will vary depending on which symptoms are present and which of these is the actual disease.

Therefore, it’s essential that you have a clear idea of what bloat looks like. That way, you will be better equipped with the skills and tools you need to help your sick sheep.

Bloat is not a condition that will affect all sheep in their lifetimes, but it’s one that has the potential to, regardless of how much attention you pay to your animals or where you raise your sheep. Know how to prevent frothy bloat and grain bloat and be sure to contact your local veterinarian if you aren’t sure what to do when it arises.