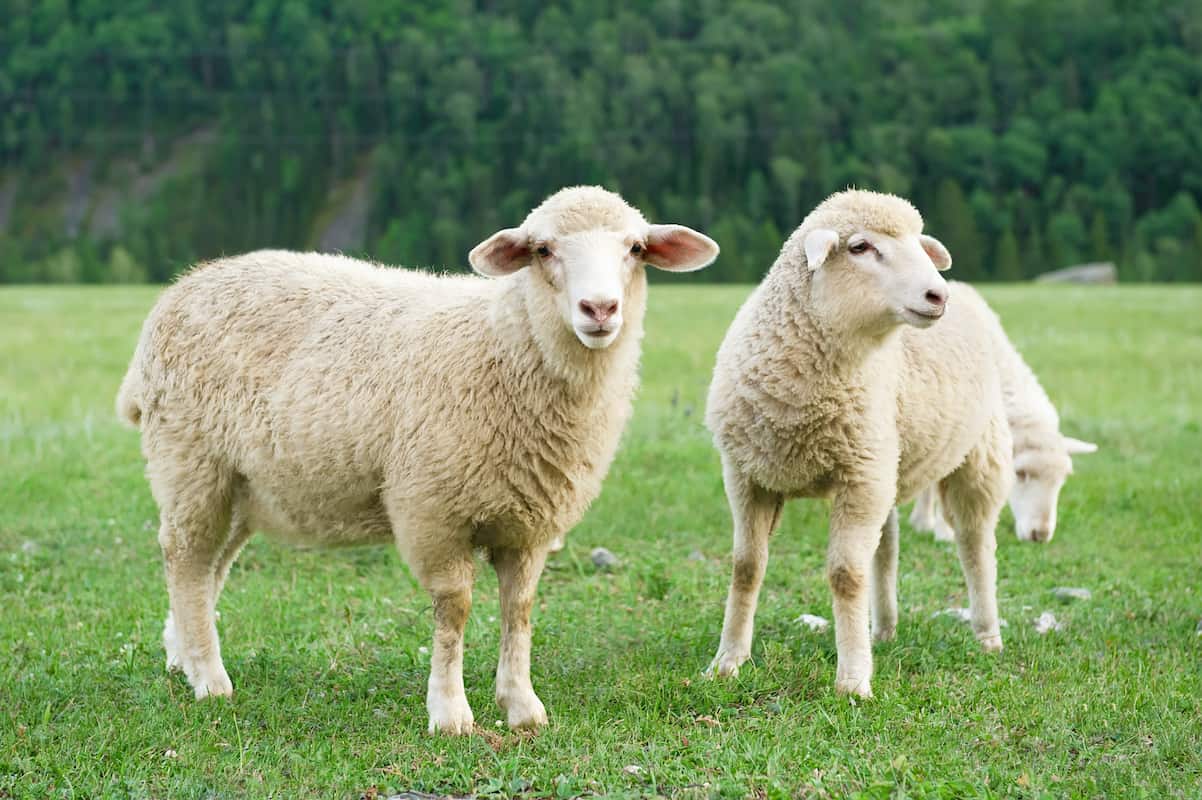 The exciting world of sheep husbandry is a great one to get into – but it brings with it all kinds of sheep vocabulary that you need to know about. If you’re looking for a glossary of sheep terms, you’ve come to the right place.

A bellwether is a sheep that leads a flock. The name comes from the bell that the sheep wear around its neck.

A cull yow is a female sheep that is too old for breeding.

A draft ewe is an old sheep that was raised on a hill farm and then sold to a farmer who has lower, less challenging conditions for the sheep to contend with. This phrase is not used often in the US.

What do you call a female sheep? A ewe, of course! Young females are referred to as ewe lambs.

A flock is a group of sheep. It can refer to a group of any size, although larger ones we frequently call mobs or bands.

A gelt is an adult ewe that does not lamb when others are lambing, generally because she was isolated from the ram due to prior lambing problems. Gelts can eventually be bred again, but most are fattened up and sold for meat later on.

A gimmer is simply a female sheep. You can use the name interchangeably with “ewe.”

This is one of my favorite sheep terms – it’s the word for a sheep that has lost all of its teeth due to old age! How accurate.

A hogg sheep is a male or female sheep at the time from when it is weaned to when it is first sheared.

A mule is a cross-bred sheep. The most common type of mule sheep is a Northern mule, which is a cross between a Swaledale yow and a Bluefaced Leicester Tup.

Male sheep are universally referred to as rams. Occasionally, you will hear the word “buck” used for a ram, although this is slang and not entirely accurate. In Britain, they refer to rams as tips.

A shearling, also known as a hogg, is a young sheep or lamb that has been weaned but has not yet had its first shearing. It is usually nine to 18 months of age, although it can be slightly older or younger depending on the breed too.

A store is a weaned lamb that is generally sold off to another farm to be fattened for meat production.

A wether is a castrated male sheep, usually one being raised for meat, though not always.

Yearlings are sheep between one or two years of age. This is a term used for other types of livestock, too. With sheep, you may also hear yearlings referred to as hoggets, gimmers, shearlings, thieves, or tegs, too.

Yoe is simply a slang term for an ewe.

Yow is a Scottish term for ewe, usually a female sheep that have already given birth.

An abattoir is an area where they slaughter animals and process into meat.

This is a system in which ewes lamb more than once per year. It is not common, with most ewes lambing seasonally or only once each year.

Also referred to as a pet lamb, a bottle lamb is an orphaned lamb that is being raised by bottle feeding. Usually, bottle lambs end up being quite small because of this.

Colostrum is the first milk that a ewe produces directly after she gives birth. This is a substance all mothering mammals produce and contains a high number of antibodies and nutrients the newborn needs.

Creep feeding is the process of providing supplemental feed to a group of lambs.

Crutching, also known as crocheting, is the act of shearing wool from between the rear legs and around the tail of a sheep. It’s often done at lambing as an alternative to a full-body shearing.

Dag is wool that is contaminated and tangled with feces. It usually forms in teardrop shapes and clings to the wool near the tail and anus of a sheep (another reason to crutch your sheep besides lambing). If you don’t regularly remove dags, your sheep could suffer from flystrike.

Fleece is a term that they use to describe the wool from a single sheep in the shorn grease state.

Grafting is when you transfer a lamb to a ewe that is not its mother (usually a ewe that has lost her own lambs) to help facilitate an “adoption.” This can prevent the need to bottle-feed a lamb in some cases but is very difficult to do.

A jug is also known as a lambing pen. This is where ewes and their newborn lambs are kept so they can bond and remain safe from threats and flock pressure.

Lanolin is the natural oil and grease found in sheep’s wool.

A mob is a group of sheep that have been raised in exactly the same way and in the same conditions for the entire season.

Mutton is meat from an older sheep.

Ovine is just a fun term that means “relating to sheep.”

Parturition is another word for lambing or birthing.

Raddling is the process of putting a marking harness – raddle – on a ram. Marking harnesses are used to help shepherds be aware of which ewes have been bred by which ram during the breeding season, and which have not. Usually, marketing harnesses consist of simple devices made of straps and a block of paint.

And ewe that has been raddled, indicates that the ram has bred her.

Rigwelted is one of my favorite sheep terms! It refers to an overturned sheep, usually, one that is heavily pregnant and finds herself rolled over without the ability to right herself.

Rise is a yellow line on the wool of a sheep. It is usually caused by the prior winter’s greasy wool being removed from the skin and replaced by fresh new wool that’s easier to cut. Seeing rise is a good sign that your sheep are ready for shearing.

Shearing is the process of removing wool from sheep. It can be done in order to sell the wool or just as a matter of basic hygiene and flock maintenance.

That’s you, my friend! Anybody who raises sheep or cares for them in any capacity is a shepherd. You may also hear the term “sheepherder,” which is somebody who is keeping sheep on an open range. Interestingly, when this term is used in the US, it is not generally used to refer to the person who actually owns the sheep (but instead just somebody who manages them).

Although the word “tup” can refer simply to ram or male sheep used primarily for breeding, the act of “tupping” refers to the breeding or mating process between a ewe and a ram.

Wool is the fiber that is removed from a sheep, ideally to be used for spinning or felting. They refer to it as wool when it is still on the sheep, too.

1. What is the Singular/Plural for Sheep?

This is easy to remember – the singular for sheep is sheep, and the plural for sheep is also sheep. It’s just like the word “moose” in that regard.

2. What is the Difference between a Sheep and a Lamb?

A sheep is over the age of 12 months, while a lamb is generally younger than that. Usually, the word lamb is used to refer to animals that have not lambed or bred yet, too.

3. What Do You Call a Newborn Sheep?

A newborn sheep is called a lamb.

4. What Is a Mature Female Sheep Called?

Usually, they refer to mature female sheep as ewes, although this can vary depending on the stage of life that they are in. For example, you may use terms like gummer, yoe, yow, or gelt, too.

A mule gimmer is a female cross-bred sheep that is suitable for meat.

There you have it! All the sheep farming terms you need to know about. Now that you know all the right lingo, you don’t have to worry about sounding silly when you’re trying to impress your other sheep herding friends.