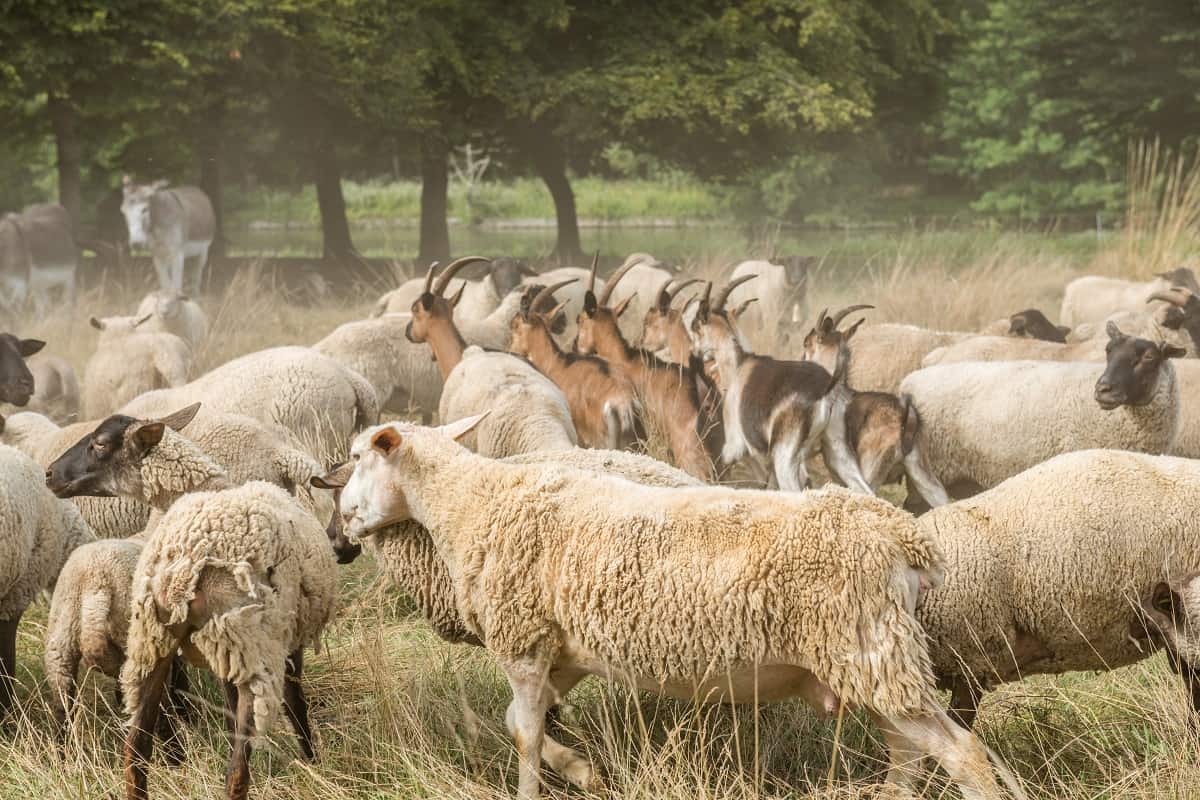 When you’re raising sheep, there are many considerations you will need to make in their housing and care.

From what kind of barn to build, how much bedding to use, and what the best kind of fencing is for predators, you’ll have your hands (and mind!) full as you begin to make these important decisions.

Regarding predators, sheep can be particularly vulnerable.

Although they aren’t the smallest kind of livestock you can raise, they have a docile, group-dependent nature.

This makes them easy targets for hungry animals like coyotes, wild dogs, bears, and wolves.

Aside from building a strong, secure fence that will both keep predators out and keep your sheep contained, there is one other trick you can try to keep your flock safe – companion animals.

Raising companion animals with your sheep poses many benefits. While it’s not for everyone, there are several key advantages to doing so.

There are several good reasons to keep companion animals with sheep. For one, sheep are social animals. They should never be kept singly, which is why most people keep them in flocks. It takes at least about five sheep for them to display their natural flocking behaviors.

Sheep can be kept with other livestock, and although they will always prefer their own kind, keeping sheep with other animals is a great way to improve their socialization and maximize your use of space.

Sheep kept with other animals are more friendly, calmer, and easier to manage.

Plus, there are lots of benefits associated with multi-species grazing, a process that improves land management by grazing different species within the same area. One of these is parasite prevention.

Allow other animals with different grazing patterns, like cattle, to eat and live alongside sheep.

You’ll have a reduced parasite load in the soil and fewer health problems to deal with.

Raising sheep companion animals is never a bad idea, but it’s especially beneficial if you are thinking about raising just a couple of pet sheep.

Again, sheep should not be kept alone or even in small groups, so introducing other species will allow you to keep them socialized and entertained without having to raise a large flock of sheep.

Donkeys are often raised with sheep as livestock guardian animals. These animals rely on sight and sound to detect intruders, sending out loud brays to scare away predators and let the farmer know a predator is about.

Donkeys are known as being great friends of sheep, bonding with them easily.

As long as you introduce a donkey early on, you shouldn’t have any problem bonding the group together.

Even if you wait until a donkey is older to introduce it to your sheep, it still shouldn’t take more than a couple of weeks for them to get acclimated to each other.

Jennies and foals tend to be the best companions for sheep. Intact males should be avoided because they can be too aggressive.

Another option is to raise cattle with your sheep. Some people employ rotational grazing, allowing cattle to graze a pasture first and then allowing the sheep their turn. This helps reduce parasite load.

While this is an effective management strategy, it’s important to note that you can also graze them together. They get along well, especially when introduced to each other at a young age.

They can even be raised in the same barns, although you might want to pay special attention to your sheep at lambing time (the cattle are so large it is easy for them to insert themselves into situations where they aren’t needed!).

Poultry are often raised with sheep as well.

Guineas are particularly useful if you’re hoping to have an alert system in place for when intruders appear – guineas are loud and will sound the alarm for you. Chickens, on the other hand, are great at keeping down parasite loads.

Whatever the case may be, poultry makes a good choice for raising with sheep.

Although the species won’t necessarily intermingle and interact with each other (they will more or less just coexist) there are several reasons to consider keeping these animals with your sheep, regardless.

Horses and sheep also get along quite well, particularly if they are introduced to each other at a young age. Are you seeing a trend here? Not only will the two species interact peacefully, but they will often intermingle, providing companionship and other benefits.

Sheep will generally keep to themselves, showing submissive behavior around the horses. Horses are rarely aggressive toward sheep and, for whatever reason, leave lambs alone, too.

Raising horses with your sheep also can benefit your pasture, as horses select the most nutritious grasses while sheep prefer stems, forbes, and new green leaves.

Llamas and alpacas are frequently raised with sheep as livestock guardian animals to help protect sheep. In these cases, it is usually gelded (castrated) males that are kept with the sheep, but unbred females also make good options.

If you choose to raise these animals with your sheep, it’s important that you only introduce one. If you have multiple male llamas or alpacas, they’ll bond with each other instead of the sheep.

Some people also recommend introducing them just before lambing, as this can allow for a very special bond to develop between the llama and the sheep.

Not all llamas and alpacas will guard (this depends on the individual animal and the species) but in general, they can serve as pleasant companions and friends for your sheep.

Goats are often raised with sheep because the care requirements for the two are so similar. The two species will get along famously – so famously, in fact, that you have to be careful about interbreeding. There have been multiple instances of sheep-goat hybrids (geeps) being produced when sheep and goats intermingle.

That said, sheep and goats get along well with each other and you shouldn’t have issues with aggression, especially if you have equal numbers of both species being raised in the same areas.

Last but not least are livestock guardian dogs. Dogs make great companions for sheep and as long as they are introduced and trained when they are puppies, they will not harm your sheep.

They can be somewhat standoffish toward people but will do an excellent job keeping your sheep and lambs company and protecting them from any predators that wander by.

Of course, raising additional animals with your sheep isn’t totally free from work. It’s not a self-sustaining ecosystem! You will still need to put in a bit of extra effort to make sure your companion animals are well cared for.

Although most of the animals listed above can eat the same kinds of food as your sheep (hay and pasture, for example) that’s not true of all of them on the list.

Livestock guardian dogs, for example, are omnivores. You’ll need to supply them with specially formulated food (with meat) to meet their needs.

You should also keep your fencing in mind. If you’re raising more creative, wily animals like goats with your sheep, the fence should be more or less airtight. The old saying is that if it can’t hold water, it can’t hold goats.

Make sure the fence you choose is equipped to contain the cleverest of your livestock. The same goes for housing. Make sure the most sensitive animal in the group is well provided for.

You may find it helpful to check out this article on multi-species grazing as you get started, too. It will give you more information on how to raise animals of different species together – including sheep!