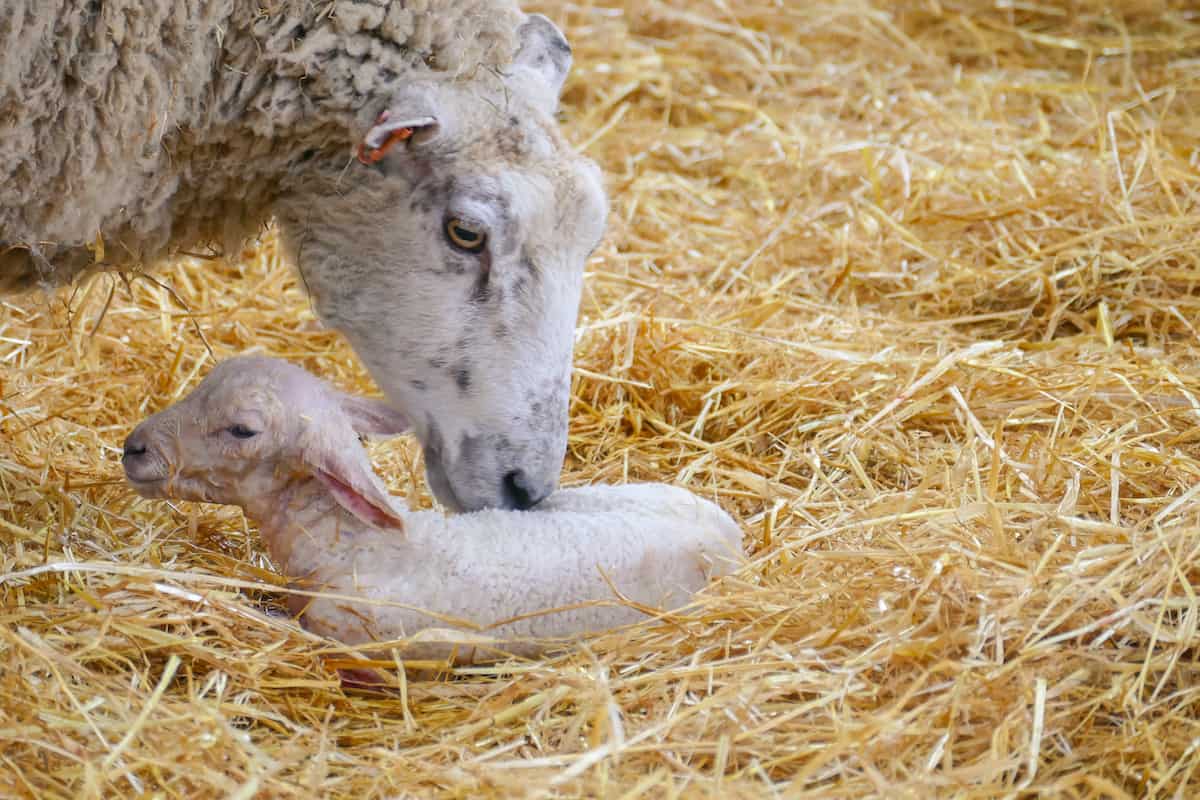 A few weeks ago, I received an email from a concerned shepherd wondering why her lambs were dying.

It took some investigation to get to the root cause.

She said that her lambs were fine when they were initially born – but then became stiff as a board and totally lifeless within just a few short days.

When I asked if she had inoculated her ewes with the CDT vaccine, she wasn’t sure what I meant – and then I knew we had stumbled upon the culprit.

Tetanus is a common  – and typically fatal – disease in sheep that is caused by the Clostridium tetani bacterium. We can get tetanus infections, too – which is why we get tetanus shots.

The good news is that tetanus can also be prevented in newborn lambs. Here’s what you need to know.

Signs and Symptoms of a Tetanus Infection

There are several signs and symptoms that you’ll notice in a lamb infected with tetanus.

The biggest challenge in dealing with this disease is that many of the symptoms imitate those involved with other diseases.

These include white muscle disease, erysipelas, polyarthritis, and other diseases.

The most common early sign of tetanus infection is overexcitability and muscle spasms.

A while later, you may notice that the jaw of your animal becomes rigid – so much so that it’s difficult for your lamb to open its mouth to eat.

Back and neck muscles can make the neck appear lengthened. The hind legs will also become stiff and extend outward.

Tripping and falling become more common, too. When startled, the muscle spasming may become even more severe.

Occasionally, a tetanus infection may cause your lamb to run a fever, though this isn’t always the case. In most cases, tetanus is found in animals with wounds or scabs.

What Causes a Tetanus Infection in Lambs?

Tetanus is a disease that is commonly found in the soil. For whatever reason, it tends to be more common on farms where horses have been raised in the past.

These spores can live in the soil for quite a long time, presenting problem after problem to shepherds.

The disease can infect a sheep through a wound (even a small cut from shearing), the umbilical cord, or regular herd maintenance practices like castration, docking, ear tagging, and more.

It can even be introduced to the herd by humans who assist ewes while they are lambing.

These bacteria can spread through the smallest wound.

More often than not, it will be difficult – if not impossible – for you to even tell how your animal was infected in the first place.

However, once the bacteria make their way into an animal’s body, they multiply rapidly and produce additional neurotoxins.

Tetanus infections are more common in certain parts of the world than others, though it is considered a global disease. In the northern Rocky Mountains, however, the organism is rarely found in the soil.

How to Prevent and Treat Tetanus in Lambs

There are a few treatments that veterinarians rely on to treat tetanus, but in young lambs, it is almost always fatal. About 80% of lambs who suffer from a tetanus infection will die.

Therefore, immunization with the CDT vaccine is, by far, the best way to present this disease.

However, it’s helpful if the lamb can continue to nurse during treatment for this disease. You can use slings for animals that are having trouble standing. Cleaning the wound that allowed the bacteria to enter into the bloodstream of the animal is also helpful. Iodine can help to kill the spores.

Antibiotics and anti-serums can help a lamb recover from tetanus. However, these treatments are rarely effective. Most medications will only ease symptoms, at best, and will not totally get rid of the disease.

When it comes to preventing tetanus in lambs, the single most reliable (and important) thing you can do is to inoculate them and their mothers with the CDT vaccine.

There are countless diseases that can affect lambs when they’re born and while they are still actively nursing. Enterotoxemia, also known as overeating disease, is one such disease, caused by a bacterium named Clostridium perfringens.

The CDT vaccine prevents infection from this disease – both the C and D types of Clostridium perfringens are kept at bay. The “T” in CDT refers to tetanus, or Clostridium tetani, which is the third disease this vaccine can prevent.

Because lambs shouldn’t be inoculated immediately at birth, you should instead vaccinate your ewes about four weeks prior to lambing. This will transfer some temporary immunity via the colostrum to the lambs.

Once the lambs are about six weeks old, though, you will need to administer another shot. Do this no later than when your lambs are eight weeks old, then give them a booster up to four weeks later.

The vaccine confers protection against clostridial diseases found in the soil.

While there is some level of herd immunity – meaning that the more animals are vaccinated or have immunity to these clostridial diseases, the better – the antitoxin can also be beneficial for other reasons.

When the CDT vaccine is administered at the time of castrating, ear tagging, disbudding, or docking, it can also confer some level of protection against tetanus infection.

Therefore, the vaccine should be administered during the times mentioned above as well as when you perform any kind of maintenance task that has the potential to spread infection.

You can immunize your ewes with two shots administered one to two months apart, as well as with an annual booster during lambing season.

In addition to being vigilant about administering the CDT vaccine – and keeping good records! – it’s also important to maintain sanitary conditions for your sheep.

Rotating your pastures can help, as can wearing gloves and other protective clothing whenever you need to work with your animals.

There are lots of reasons to allow ewes to labor on their own at lambing time.

For one, they will almost always be able to deliver healthy lambs on their own, without any intervention on your part.

Plus, the more you intervene during lambing, the more likely it is that you will transmit diseases and pathogens to your herd.

Unless you absolutely need to intervene, try to avoid it to prevent tetanus infections as well as others.

One of the most common ways in which lambs are infected with tetanus is through their umbilical cord. When a lamb is born, it will have an umbilical cord still attached to its belly. The cords vary in their length among individual lambs, but they can all – no matter the length – be an entry point for the tetanus bacteria.

Therefore, it’s important to use a pair of sterile scissors to clip the cord as soon as possible after the lamb is born.

Wear a pair of gloves to do this so you don’t impart your scent on the lamb and confuse its mother. Clip the cord to one or two inches in length, then treat the navel with iodine to prevent infection. This is commonly know as ‘dip,’ hence the adage to remember to ‘clip and dip!’

Keep an eye on this area for a few days after the lamb has been born to make sure it does not become infected.

Can Tetanus Infection Be Cured?

Unfortunately, once a lamb gets tetanus, it’s probably not going to get rid of it.

Some species of animals, like dogs, cats, and even humans, are usually able to survive tetanus infection. However, that is typically not the case with sheep.

Just about all grazing animals are at risk of tetanus, particularly when there are wounds from standard management practices like castration and ear tagging. Infection can also arise when accidents occur.

Even if you don’t shear, tag, or castrate your sheep, the risk of them getting tetanus is still there – they could puncture their skin on a piece of loose fencing or step on a nail.

Therefore, it’s a good idea to always administer the CDT vaccine – and to take other steps that will ensure the health of your sheep for many years to come.