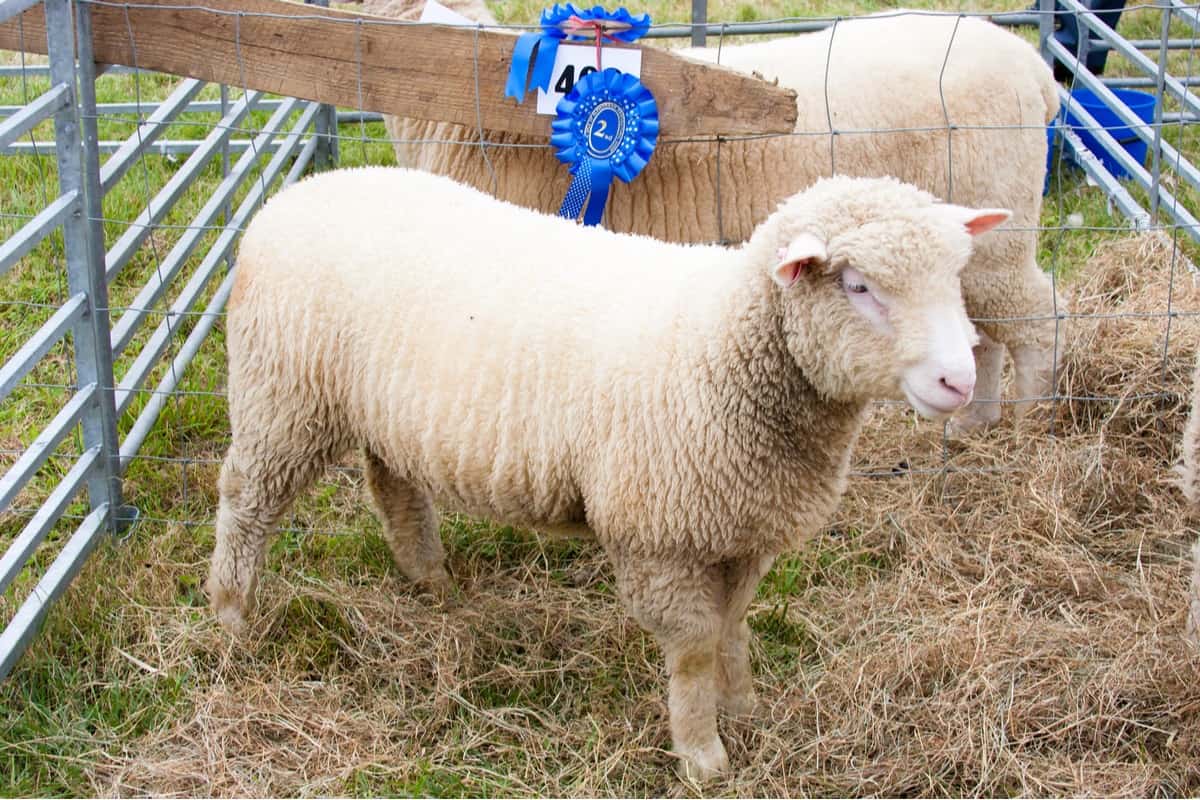 Thinking of raising sheep? If so, you might want to consider the Rambouillet.

The Rambouillet is a breed of sheep that originated in France. It was initially bred for its meat and wool, but today it’s also often raised as a show animal. This breed has many distinctive features that make it stand out from other breeds such as its dense coat of wool.

When you’re comparing the many types of sheep breeds that are out there, you’ll have no shortage of options to consider. Is the Rambouillet one you should include on your list? Here’s what you need to know.

What is the Rambouillet Sheep Breed?

The Rambouillet sheep is a breed of sheep originating from France. The breed is known for its fine wool, which can be used to create high-quality yarns and fabrics.

Rams of this breed are average in size, typically tipping the scales at around 250-300lbs, with ewes weighing around 150-200lbs.

What is truly remarkable is the wool. Ewes can produce a fleece weighing up to 17lbs with yields of up to 55%. The staple length is generally around 2-4-inches and has a fiber diameter of around 20-24.5 microns.

When you choose to raise Rambouillets, you don’t have to choose wool over meat. It’s not only a great wool producer, but it is also the largest of all fine wool sheep – therefore, this is a breed that can also be raised for meat.

This breed is one of the oldest in the record books, with its origins dating back over 200 years. It is derived from Spain’s famous Merino sheep, which were some of the world’s first and best-producing wool bearers. Of course, Merinos are still prized as wool breeds today.

At the time, the Spanish government knew exactly what they had – and they didn’t want to lose it! Therefore, any exportation of these sheep was strictly forbidden.

In the late 1700s, that policy changed when the King of Spain agreed to send more than 350 Merino rams and ewes to his cousin Louis XVI in France to help improve their stock. The French government began an active sheep breeding program on the Rambouillet farm, a breeding program that continues to this day.

Later, other Merinos were introduced to Germany, with breeders making use of French Rambouillet sires. Because of this, there are several genetic lines of Rambouillet that you might find, with some traceable to France and others to Germany.

You might hear of this breed referred to synonymously as the Rambouillet Merino or the French Merino as well.

In 1889, the Rambouillet Association was formed in the US to preserve the breed. As a result, more than 50% of all sheep in the western American rangers are of Rambouillet descent.

Here are some of the best reasons to consider Rambouillets for your flock.

The Rambouillet sheep breed is a hardy and intelligent animal that produces quality wool. This particular breed of sheep originated in France and was bred for its large size, thick fleece, and high fertility rate.

The French government began to improve the lambing percentage with this breed because they wanted it to be more productive than the other breeds at the time. Today, you can find Rambouillet sheep all over Europe as well as in North America. Because of this widespread availability, it is not difficult to find lambs, ewes, or rams to start your own flock.

Rambouillets are some of the best wool producers you will find. They produce heavy fleeces and can be crossbred with medium and long coarse wool sheep to produce rugged ewes with heavy, attractive wool of a medium weight.

If you want to raise sheep for meat, Rambouillet sheep are a good choice for that, too. These sheep are heavy, with lambs growing rapidly with proper feed. They’ll produce satisfactory weights at just 6-9 months of age.

Rambouillets can also be raised for mutton if you want to grow them out a bit longer.

Rambouillet sheep are strong, hardy animals that can do well in most climates. They perform well on sub-par pastures, though proper pasture rotation and good feedstuffs are still essential. They also have strong flocking instincts, a major benefit if you choose to raise these sheep on a large range.

Rambouillets, even the rams, are very calm and unassuming. They are not aggressive and do not fight. They do well with human interaction, mostly minding their own business and going about in a quiet, alert fashion.

Rambouillet sheep are often used in the development of new breeds. It was used to create the American Blackbelly sheep, which is then crossed with the Mouflon and Barbados Blackbelly to create impressive horns that were sought after at western hunting ranches.

Here are some things to keep in mind if you decide to raise Rambouillet sheep.

Rambouillet sheep are known for their excellent wool production – but there is a trade-off here. Although Rambouillets produce lots of wool, it can be problematic in that this heavy covering extends up and into the face. In some severe instances, it has caused wool blindness, with the wool obstructing a sheep’s vision almost entirely.

The good news is that selective mating has made this condition much less common, with sheep not prone to this issue found in most flocks. It’s worth vetting your potential flock carefully to make sure this does not happen.

Although Rambouillet sheep and lambs produce a meat quality that most people regard as satisfactory, some critics argue that these sheep are not the best tasting. Even though Rambouillets have meatier bodies than their predecessors, Merinos, the meat has poor conformation with lower yields of edible or saleable meat overall.

Therefore, many breeders cross their Rambouillets with sheep who provide better conformation and flavor.

3. High Yolk Factor in the Wool

When raising Rambouillets for wool, keep in mind that it has a high yolk factor. If you aren’t familiar with wool harvesting, just know this – a higher yolk factor means that the wool is much more likely to shrink. Although this is definitely not a deal-breaker for most people, it’s something to keep in mind.

This point is purely one of opinion – I personally find Rambouillet sheep to be attractive individuals, both sheared and fully covered in wool.

However, some farmers will complain that the sheep aren’t super attractive when sheared. That’s because Rambouillets have large, saggy wrinkles that are evident when they aren’t fully covered in wool.

How to Raise Rambouillet Sheep

Rambouillet sheep can be raised just as you might care for any other type of sheep.

It’s important to note that Rambouillet sheep experience long breeding seasons. Although they aren’t necessarily considered year-round breeders, they are less seasonal than other breeds, like Icelandics. Because of this, you might keep separate housing for rams and ewes of breeding age. That way, you’ll know when lambing is likely to occur.

Be sure to shear your Rambouillets at least twice a year – and that’s a bare minimum. These sheep grow wool rapidly and the more often you shear, the higher quality the wool will be. Shearing can also help prevent issues like flystrike, a disease to which heavy wool bearers like Rambouillets are prone.

Are Rambouillet Sheep Right For Me?

The Rambouillet sheep is a very popular breed and for good reason. These sheep have many wonderful qualities that make them great farm animals.

Great for meat and wool, Rambouillets are also quite friendly and docile, making them good as pets or for exhibition purposes, too.

Of course, there are disadvantages that come with raising this breed of sheep, but that’s true of just about any option you might consider. Weigh the pros with the cons to decide if Rambouillet sheep are right for you, and get your flock started today!