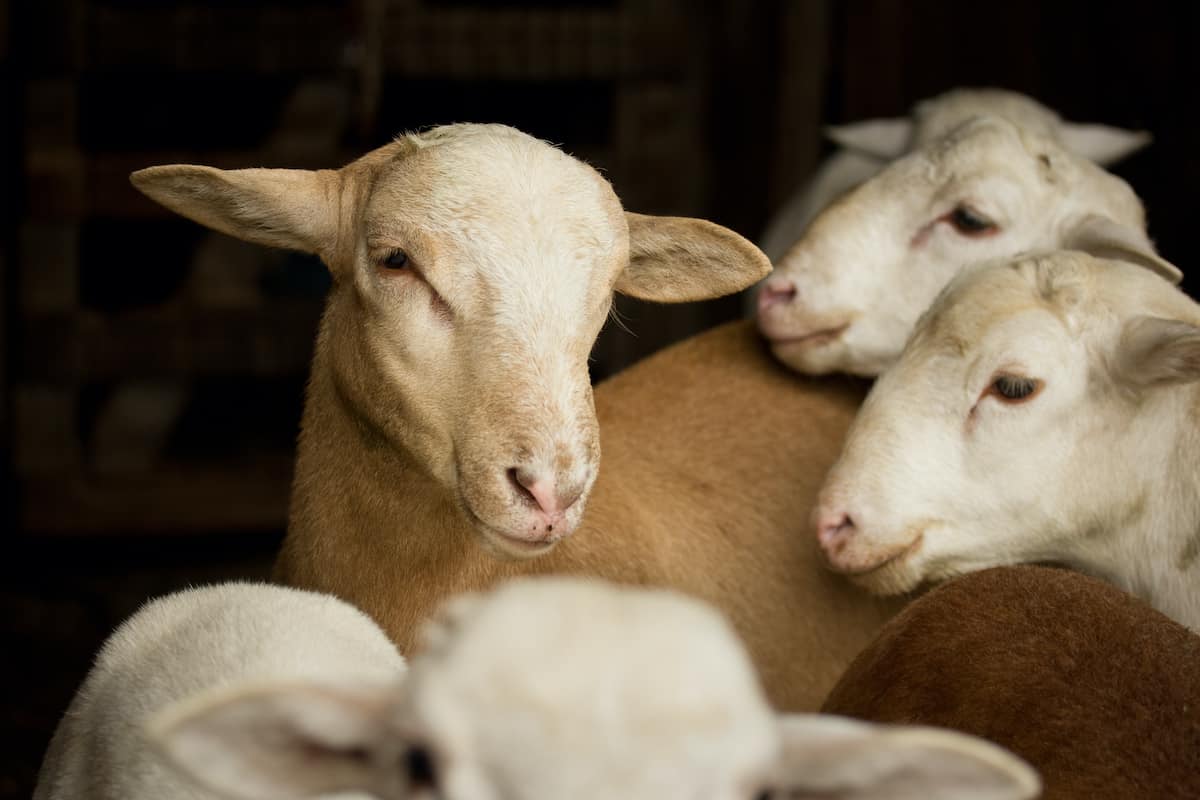 Considering raising sheep? If so, you might want to think about selecting the Katahdin as your breed of choice.

The Katahdin is not the sheep breed to select if you plan on raising sheep for wool. However, it is a great choice for farms looking to specialize in meat and milk production. This cold-hardy sheep is resilient and easy to manage.

However, is it the right sheep for your needs and goals? I’ll tell you what you need to know in this guide to the Katahdin sheep breed.

What Are Katahdin Sheep?

Katahdin sheep were first developed in the middle of the 20th century. This was when a farmer, innovator, and amateur geneticist named Michael Piel recognized his interest in producing a truly one-of-a-kind sheep breed.

Piel, a resident of northern Maine, wanted to raise sheep that could be used for more utilitarian purposes than for wool or meat production alone.

He wanted sheep that would eat all kinds of vegetation instead of typical forage grasses so that they could be used to graze power lines rather than having to spray or mow down the overgrowth.

He began researching hair sheep in earnest. His plans included breeding a combination of ewes from Tunis, Suffolk, Hampshire, Southdown, and various African breeds. In his selections, Piel sought traits such as hair development (rather than wool), meat conformation, flocking instinct, and high fertility.

By the 1970s, Piel succeeded in creating a superb meat sheep that did not need to be sheared. He named them Katahdin sheep after the tallest peak in the state. Later, he improved upon the breed by crossing them with Wiltshire Horn sheep to improve their size and bone structure.

Later, the breed was further improved upon by Paul and Margaret Jepson of Vermont, who crossed their Katahdins with St. Croix sheep for additional hair characteristics.

Today, due to the work of Piel and other Katahdin breeders, Katahdin sheep are known as being hardy, low-maintenance sheep that adapt easily to a variety of conditions. They are prized for their lambing ability and their carcasses that are lean and meaty. In fact, they can grow up to 250lbs. Very little of that weight consists of fat and most of it is instead high-quality meat.

Because Katahdins do not produce a fleece, they do not need to be sheared. They are efficient sheep that can even be used to manage land. Docile and easily handled, they are typically raised for meat but can occasionally be raised for milk as well.

Mature ewes are usually about 120-160lbs, while rams can be anywhere between 180-250lbs. Usually, lambs are ready for slaughter when they are around 95-115lbs.

These are some of the best reasons to raise Katahdin sheep – though the list is by no means exhaustive!

One of the most obvious benefits of raising Katahdin sheep is that they do not need to be sheared on an annual or twice-per-year basis.

Shearing adds an extra expense to raising sheep, and if you do not intend to focus on wool production and create the setup for annual sheering, having a breed that does not need shearing is the better option.

Rather than developing lustrous coats of wool, they put on thick winter coats made of smooth hair. This coat helps to keep them warm during the winter months but once spring arrives, they shed the coat to be able to withstand the heat and humidity.

The hair of Katahdin sheep can vary in the texture and length among individuals and it can be just about any color. Usually, though, it will consist of coarse outer fibers and an undercoat of finer wool fibers. When the weather turns cold and the day length shortens, the hair will become quite thick, but as soon as the spring arrives, much of this will be shed.

Although Katahdin sheep aren’t 100% resistant to parasites, they are much more parasite-resistant than most other breeds. In fact, some studies suggest that Katahdin sheep, along with other hair sheep, are resistant to internal and external parasites like the barber’s pole worm.

While you may still need to treat your Katahdin flock for parasites, this can usually be done on a far less intensive basis. In fact, parasites can often be prevented with simple management techniques like pasture rotation instead of chemical dewormers.

Katahdin ewes are prized for their excellent mothering instincts. They lamb easily, often lambing successfully on their own, on pasture, with little intervention from the shepherd. The lambs have a tendency to be alert upon birth and are vigorous growers, too.

Katahdin ewes usually bear twins, each of whom will be around 8lbs on average. However, triplets and quadruplets are common, too, especially among well-managed flocks.

Despite the fact that Katadins often bear multiples when they lamb, ewes are good at lambing without assistance and have high milk production.

Ewes have more than enough milk for their lambs and therefore are often praised for their milk production as well as for their meat.

Both ewes and rams are known for their exceptional fertility. Both reach puberty early and can breed for long periods of time before they become too old to do so. Rams are aggressive breeders and are unique in that they are fertile year-round (most rams breed only seasonally).

Because they were originally bred to graze brush under power lines, Katahdin sheep are often raised for land management purposes. They will eat a lot of material that other sheep won’t touch, leading many Katahdin producers to describe them as being more “goat”-like than other sheep breeds.

Because Katahdin sheep will eat just about anything, they tend to be less costly to feed, too. That being said, superior forage will reduce the need to provide supplemental feed, like grain, so the better the pasture quality, the lower your costs of production will be, too (and you’ll also have healthier sheep!).

Finally, Katahdin sheep are easy to manage. They are docile, so they are not difficult to handle (unlike other more primitive breeds, such as Icelandic sheep). However, they also do well when they are left to their own devices.

Although the benefits far outweigh the disadvantages, there are a few challenges to raising Katahdin sheep that you should be aware of.

Flocking instinct is the ability of sheep to follow each other and to herd together. This is a highly desirable characteristic to look for when you are raising sheep on large pastures. This is where the threat from predators tends to be high.

Katahdin sheep aren’t the poorest “flockers,” but they aren’t the best, either. In some regards, this lack of a flocking instinct can make it more challenging for you to care for your sheep, as they will be more difficult to move.

On the other hand, a weakened flocking instinct makes it possible for you to raise smaller groups of sheep, which isn’t always possible in sheep with stronger instincts.

Of course, since Katahdin sheep are hair sheep, the wool production is not what you would find with wool breeds. You won’t get much fiber from these sheep at all. This is far from problematic if you want to raise sheep for meat. However, it’s an important consideration to make if you plan on raising sheep for fiber.

One other thing to be aware of when raising Katahdin sheep is that they are less seasonal than other sheep breeds. This means you might not always have a great idea of when your ewes have been bred. You could have lambs in the late fall, or in the spring. If you prefer to know exactly when your lambs are going to be born, this might not be the ideal breed for you.

Is the Katahdin Sheep Right For Me?

Although there are a few disadvantages to raising a flock of Katahdins, these sheep are, for the most part, some of the hardiest and easiest to raise.

If a low-maintenance flock of meat producers is what you’re after, this Maine native is the way to go when selecting your ideal breed.