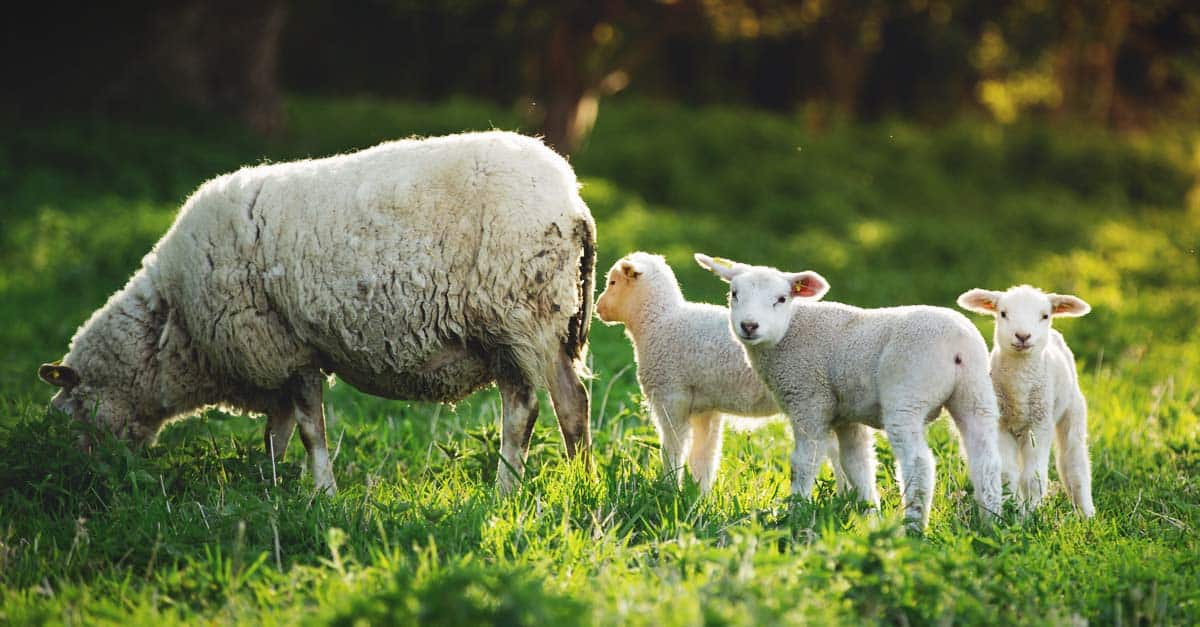 If you’re like most homesteaders, you probably have a great deal of anxiety about the unknown. There is perhaps no time where that is truer than when you are preparing for lambing on the farm.

The first time we experienced lambing on our farm, I was terrified. I read a lot of articles and watched a lot of videos, but the only thing that they had in common was that they all contradict each other.

It can be stressful not knowing what to expect during lambing. However, if you are adequately prepared for lambing, you can relieve a lot of that anxiety. Here’s everything you need to know about how to prepare for lambing from my practical experience.

When Does Lambing Occur?

Lambing usually occurs in the spring, but this depends on when your ewes were bred. Ewes have gestation periods of around five months. There is some natural variation in this – some ewes will take a few days more and some a few days less.

No matter what, try to keep track of the date your ewes were tupped. Mark them on the calendar so you know roughly when to expect your lambs. This will let you be fully prepared in advance for lambing.

What is “Tupping” – and When Does it Happen?

Tupping is just the term used to describe the breeding of your ewes. While some sheep breeds can conceive at any time of the year, others are seasonal breeders and will only go into heat in the fall.

You don’t need to do anything to prepare for this. Just put your ram in with his ewes. As long as he’s fertile, you’re all set.

It can be helpful to know the exact date tupping occurred so that you can plan ahead for the lambs’ delivery. If you have anxiety about not knowing the exact dates on which your lambs were conceived, you can always put a marking harness on your ram.

A marking harness is a strap-like system with a block of livestock crayon on the bottom. The crayon will rub off on the ewe when the ram mounts her for breeding.

Watch for Signs of Pregnancy

An easy way to tell, however, that a ewe is pregnant is that she will not come into heat again. A ewe who has gone back into heat will have a red, swollen vulva and will allow herself to be mounted by the ram. Usually, ewes who are at least six or seven months of age are capable of being bred, and will return to a heat cycle about once every three weeks.

Here’s where it gets tricky – a pregnant ewe can also have a swollen vulva. This will appear about six weeks into the pregnancy. About six weeks after that, her belly will begin to swell. She may also slow down and lie down more often.

As you get closer to the due date, you will notice other signs that are difficult to mistake, particularly if your sheep have been sheared. Your ewe might “bag out,” meaning her udders will swell in preparation for nursing, and her swollen abdomen will be even more pronounced.

A few days before delivery, the pregnancy should be blatantly obvious. You might notice a hollow on either side of the ewe’s tail and there might also be some discharge. Her vulva and udders will be very swollen.

Your ewe’s behavior will change a lot in the days leading up to lambing, too. Right before she is due to lamb, she will return to the same spot and paw at the ground repeatedly. She will squat frequently to urinate and will be more restless or irritable than normal.

When it comes to preparing for lambing, you don’t need to do much. However, the most important thing to keep in mind is what you are feeding your girls. Pregnant ewes must be fed a nutritious, balanced diet.

You’ll want to take care of any potentially stressful chores, like hoof trimming or shearing, long before your ewes are due to lamb, but you don’t need to increase calories until later in the pregnancy. Once it’s clear that she has been bred, you will want to add some supplementary hay –  but only in times of inclement weather or stress.

Overfeeding is often more damaging to a pregnant ewe than underfeeding. Ewes are remarkably efficient and don’t need a lot of extra calories during pregnancy. Too much food can actually cause pregnancy toxemia, which will cause issues during pregnancy as well as during lambing.

One of the most important things you can do to ease your nerves and to prepare yourself fully for the lambing experience is to make sure you have all the equipment you need.

Luckily, there’s not a lot you need to do in order to ensure a successful lambing. Nature will usually take care of that for you! However, there are some basic items you will want to have on hand.

Towels, for instance, are good to have on hand. You probably won’t use them, as your ewe will take up the task of cleaning her lamb after it is born. You actually should avoid wiping down a lamb immediately following birth, as this can cause issues in the ewe bonding to her lamb. However, if it is particularly cold or if the ewe and lamb are not bonding well (or if she is delivering another lamb) you may need to intervene to dry the lamb off.

You will also want to have a good set of rubber gloves. This will reduce the risk of disease whenever you need to handle your lambs.

Of course, you should be handling them as little as possible to avoid problems with bonding, but at a minimum, you are going to need to cut the umbilical cords of your lambs after they are born. To this end, you will also need iodine and a pair of surgical scissors.

There are other items that you may consider purchasing too, either before lambing or sometime shortly after. It can be helpful to have some milk replacer and colostrum on hand in case your ewe don’t bond to her lamb and refuse to nurse. CMPK gel is also helpful if your ewes are having trouble nursing.

While you can always pop out to the feed store to grab this in an emergency, it’s smart to have some on hand – especially if your ewes decide to lamb when the stores are closed.

Finally, some farmers may choose to purchase their vaccinations ahead of time. You don’t need to vaccinate right away, but within a few weeks of birth, you will need to administer, at a minimum, the CDT vaccine.

This vaccine protects against Clostridium perfringens types B, C, and D as well as tetanus. Other vaccinations are available for lambs, but this is the only one that is universally recommended by all veterinarians.

Similarly, if you are going to castrate ram lambs, you will need to pick up some castration bands and a gander at some point. Castration needs to be done within the first seven days of the lamb’s life to avoid stress and prevent infection.

Plan Ahead for Potential Problems

Again, nature operates on its own schedule – and often, there’s not a lot that you can do to prevent or eliminate problems during lambing. However, it’s always best to think ahead and to do everything you can to minimize the risk.

For example, you should avoid overfeeding your eyes while they are pregnant. While you don’t want to provide them with too few calories, you don’t want to give them too many. Keep an eye to make sure your ewe is gaining an amount of weight that is reasonable for her size and health.

It’s also a good idea to think about your shelter prior to lambing. Ewes can – and frequently do – go into labor outside. If you live in an area where the weather should be pleasant during lambing, this is not a problem. To be honest, it’s usually safe for a ewe to lamb outside during colder weather, too – sheep are pretty hardy.

However, this is not always the case. To eliminate the likelihood of a lamb becoming hypothermic immediately after birth, you should encourage your ewes to go inside the barn at night. In my experience, ewes rarely go into labor in the middle of the night – but often early in the morning or late in the evening instead. This is purely anecdotal, but it’s something I’ve heard mentioned by many other sheep farmers, too.

Sheep don’t need warm temperatures to lamb – but they do need a dry environment. If the soil outside is still frozen, outdoor lambing can be problematic because the dropped lamb will chill instantly. Precipitation can be dangerous too because it will drop the core body temperature of your lambs.

Putting your sheep inside at night, as well as within the window in which you expect them to lamb, can reduce the likelihood that they will lamb in poor conditions. You will have greater control over the environment. Makes sure the barn is loaded with clean, dry straw and that you have extra on hand for the clean-up process afterward.

Besides that, there’s not much else you need to do! Make sure your sheep are sheared ahead of time so you will be able to see the progress of the delivery – this also reduces the likelihood of infection. Also, research the veterinarians in your area that work with sheep, and have their number on hand.

Then, mark the date on the calendar and try to be there when it happens.

What to Do When Labor Starts

Congratulations! You (and most importantly, your pregnant ewe) made it to the big day.

In another post, I’ll tell you all about the major labor milestones and timeline. However, as long as you have a clean, dry, and warm place for your ewe to deliver her lambs, you shouldn’t have to intervene too much.

Just keep an eye on the timing and make sure you have planned ahead. Whenever possible, try to be there in case any problems arise – but don’t panic if things don’t go as planned. After all, what truly does always go as planned in the world of homesteading?