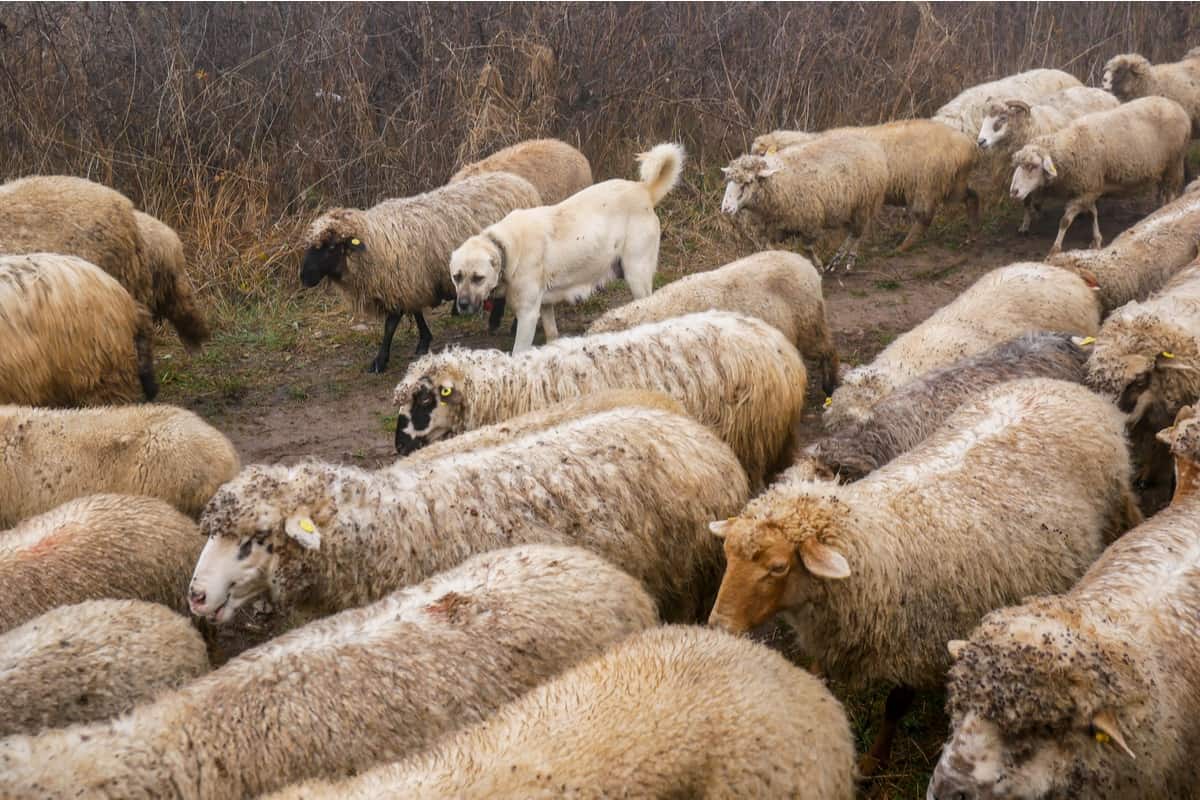 There are so many things that I love about raising sheep.

They’re cute, they’re entertaining, they produce lots of meat, milk, and wool… the list goes on!

However, there’s one thing that I’ve learned to be true about sheep over the many years I have raised them – they aren’t always the brightest.

That’s not to say that individual sheep aren’t intelligent. We’ve had plenty of super-smart sheep in our days and they can easily be taught new things. However, when sheep get into a group, they tend to lose their minds.

While that’s not always a bad thing – in fact, it’s one of the nicest things about raising sheep, in many cases, since it makes them easier to herd – it can be detrimental when it comes to keeping predators away from sheep.

There are all kinds of predators that go after sheep, and really, can you blame them? When sheep flock up together and move en masse, thinking as a group rather than as individuals, they are easy targets.

As a shepherd, it’s important to think proactively about how you will protect your sheep from predators. In this article, I’ll walk you through the many options you have to keep your flock safe from harm.

If you raise cattle, there probably aren’t too many predators you have to worry about. Although you might have the occasional issue with predators going after calves or weak members of your herd. For the most part, the sheer size alone of a cow will probably deter the vast majority of predators.

That’s not the case with sheep. They are at that “sweet spot” where some predators will leave them alone. However, others view them as a tasty entrée to be devoured. While you likely won’t have as many predators to worry about as if you were raising chickens, you’re going to have your work cut out for you when it comes to protecting sheep from predators.

The list is extensive but the predators you’ll have to worry about will vary depending on where you live.

For example, I have mostly coyotes and domestic dogs in my neck of the woods to worry about. Although we have bears, we have enough wooded space for them to roam about in (and enough wild sources of foods) where they are not an issue with our sheep.

In some years, coyotes are more problematic than others, particularly those in which the winter was harsh and killed off normal sources of food (like deer). This year’s winter was mild and so coyotes aren’t as much of a concern.

Other predators you might have to worry about targeting your sheep include mountain lions and wolves.

Now, it’s important to note that these are predators of adult sheep. Young lambs might be even more vulnerable, especially if you are raising sheep primarily on pasture. Depending on where you live and the precociousness of your lambs, you might even have to watch out for large birds like hawks and eagles along with smaller mammals like foxes and bobcats.

Even raccoons have been known to kill small lambs on occasion, usually by chewing their noses.

The good news about preventing predator attacks is that you can take steps to address these risks en masse, rather than by addressing each predator one by one.

How to Protect Sheep from Predators

The most convenient thing about raising sheep is that, unlike pigs, they don’t need a hot electric fence to keep them contained. In fact, electricity doesn’t always work that well with sheep (they’re naturally insulated with their wool!). So many shepherds choose to forego it entirely in favor of lower, less intensive page wire or other economical options.

The downside of this is that a low page wire or wooden fence isn’t going to keep predators out the same way it will keep sheep in.

Therefore, you may have to add an additional level of security by running hot wire around the perimeter of your fence. That way, you can make sure your sheep are protected no matter what. If an electric fence isn’t an option, you could always use barbed wire instead.

There are several considerations to make when you’re looking for the ideal breed of sheep for your farm.

Are you raising your sheep for milk, meat, or wool? Do you want to be able to handle them easily for shearing or transportation? What about breeding?

One thing you will have to consider is the flocking tendencies of your chosen breed. Flocking is a sheep’s only line of defense against predation. When one sheep goes somewhere, often, the rest of the flock will follow – even if that’s not a wise choice.

However, if you are concerned about animals that tend to hunt in packs (or raising sheep farther from your house) the flocking tendency might be less important.

Either way, consider this as you’re “shopping” for your sheep. The flocking instinct is highest in the fine wool breeds but it does exist in all breeds of sheep to varying extents.

One of the best ways to mitigate risk is to outsource your livestock protection – employ the help of a livestock guardian animal!

Livestock guardian dogs are some of the most popularly chosen options. These animals live with the sheep 24/7 and are trained (and bred) to be gentle with the sheep yet ferocious toward anything that comes near them.

They can often help with moving the sheep, too.

It can be challenging to find the right LGA (livestock guardian animal) for the job. Especially with dogs, you need to choose an animal that has been extensively trained. Otherwise, you’ll risk the animal turning on the sheep and attacking them. It’s often recommended that you raise this animal with your sheep from puppyhood.

Other livestock guardian animals to consider include donkeys, llamas, and alpacas. Some shepherds even choose to raise their sheep with larger livestock, like cattle, as the larger animals serve as a deterrent against many predators by sheer virtue of their size alone.

Sheep are, unfortunately, vulnerable to predation around the calendar year.

However, when it comes to preventing certain types of predators, like predatory birds and raccoons, you really only need to worry about lambs.

Because of this, there are certain animal husbandry tips you might incorporate to make predation a bit less likely.

For example, you can choose to lamb during the late spring or summer, when food sources are less scarce and tiny lambs are less likely to be a target. You might also choose to lamb at a time of year when you can be more present to keep an eye on things.

Many sheep breeds are seasonal breeders so it’s easy to time lambing in this way. Though some are not, so you’ll need to adopt a more tailored approach.

This isn’t something I have tried personally, but have heard of several times from other shepherds as a way to keep predators away from your sheep.

In the past, farmers didn’t just raise one kind of livestock – they raised multiple species of animals for a diversified farmstead. This met their food needs, of course, but could also help deter predators.

Pigs, especially large, full-grown pigs, are aggressive creatures that many predators have learned to avoid. Consider pasturing pigs around the perimeter of your farm to give other animals the urge to steer clear!

Again, cattle might serve the same benefit – all the more reason to consider diversifying your “farm portfolio”.

During particularly vulnerable times of the year (such as during lambing), we make it a habit to lock our sheep into the barn at night.

Even if you choose not to lock them inside, it might be a good idea to at least run your sheep into a paddock that’s closer to your home or another well-trafficked area.

This is an effective predator deterrent for several reasons. For one, it will keep your sheep close so you can hear their cries if anything goes amok.

It will also help reduce the likelihood of a predator attack as many animals are less likely to approach if there are humans nearby.

In our many years of raising sheep, we haven’t once lost a sheep to a predator. I wish we could say the same about our chickens – but I guess that’s part of raising chickens, right?

I’m sure that much of that is attributable to luck alone. However, taking the steps above to protect sheep from predators in raising our sheep has helped us prevent a predator attack before it could occur.

That’s the best advice you can follow, too, when it comes to raising sheep. Think carefully about the areas in which you are raising sheep – and do your best to think like a predator. Take a close look at your fences, barns, and other structures, and make sure you have shored them up as well as possible.

In being vigilant and prepared, you’ll be able to prevent the vast majority of predation issues with your sheep.