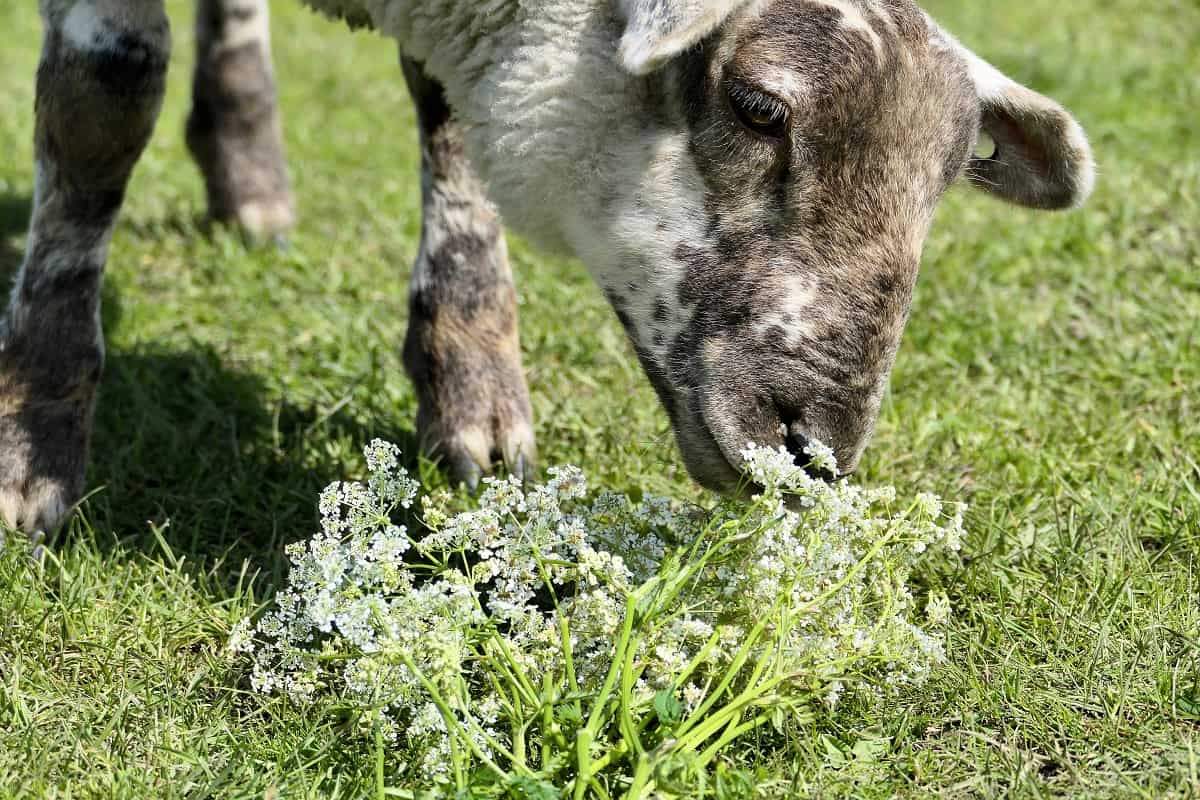 If you’re new to raising sheep, you might find yourself looking around your pastures in a panic. Will that unidentifiable weed growing in the corner be safe for your sheep to eat? What happens if they get out of their pen and meander over to your vegetable garden? What if they eat your daylilies or poisonous flowers?

The easiest way to prevent any accidental poisoning of your sheep is, of course, to make sure you’ve built fences that are strong and secure enough to hold them. Providing your animals with a balanced, steady diet of plenty of hay, grain, and mineral supplementation can help, too. That way, they won’t be tempted to eat things that could potentially be poisonous.

Aside from that, it’s a good idea to familiarize yourself with the list of plants that are poisonous to sheep. Ready for some great news? There’s not that much that sheep can’t eat – so the list is short!

Here’s what you need to know about plants that are poisonous to sheep.

Plants That Are Poisonous to Sheep

While you’ve likely gone to great lengths to make sure that your pasture is planted into sheep-friendly vegetation, the reality is that the boundaries between grazing areas and landscaped areas often blur. It’s not uncommon for sheep to encounter certain plants in a pasture that they really shouldn’t eat.

Be proactive and remove these plants from the areas your sheep will graze.

Irises are typically grown for ornamental purposes – you aren’t likely to find wild irises growing in your pastures. However, you must remove these plants if they are growing along fence lines, as your sheep will gladly nibble them. They can cause digestive upset when consumed by sheep in large amounts.

In small amounts, holly might not cause serious problems. However, when consumed in large quantities, holly berries, in particular, can cause diarrhea, vomiting, and confusion.

Rhubarb leaves are poisonous to just about all animals (including humans, believe it or not). That’s why we eat the stalks of this plant instead. The leaves can cause symptoms like salivation, convulsions, and even death in sheep.

While sheep can handle a bite of broccoli here and there, be careful feeding too many cruciferous vegetables (including things like mustard). In excess, these vegetables can cause photosensitization, head shaking, goiter, vomiting, and more.

Although butterflies love it, it’s not a good plant to have around if you have sheep. Eating too much can lead to symptoms such as drooling, loss of appetite, difficulty breathing, convulsions, and unfortunately, death.

St. John’s wort isn’t just dangerous for sheep when it’s ingested. It can also cause skin irritation such as blisters, lesions, and peeling.

When ingested, it can take some time for symptoms to appear – sometimes 3 weeks! This is a difficult kind of poisoning to diagnose as a result.

Despite the name, eating too many lambsquarters can be especially dangerous for pregnant ewes, as this plant can lead to abortion.

Nightshades are poisonous to everyone – sheep included. An actual tomato or pepper won’t hurt your sheep if it’s ripe (though they probably won’t eat it). However, the plant parts need to be kept far away – that goes for tomato plants, peppers, potatoes, and eggplants alike.

Yew shrubs are often grown around the home, prized for their green, needle-like growth. Be careful growing yews if you have sheep, though, since it will kill your sheep quickly if they take so much as a bite. Sheep who are poisoned by yew rarely recover.

Both acorns and young, tender shoots from oak trees can cause severe poisoning when consumed in large quantities. Symptoms include anorexia, excessive thirst, and gastroenteritis.

This plant is poisonous to sheep regardless of whether it’s alive or dead. It can cause symptoms in sheep like fever, listlessness, and mucous discharge.

Morning glory is a beautiful vining plant that you can grow in your garden. Skip it if you have sheep – just about every kind of livestock animal, including hogs and sheep, are vulnerable to poisoning from the hallucinogenic seeds.

English ivy is toxic to just about every kind of livestock, including sheep. It can cause excessive thirst, diarrhea, and rapid breathing. Severe poisoning can cause your animal to fall into a coma.

Mountain laurel, along with the closely related azalea and rhododendron, is toxic to sheep. Consuming large quantities of these plants can lead to death, while smaller amounts can cause salivation, anorexia, lethargy, and incoordination.

Ask any vet, and he’ll likely tell you that wild cherry is one of the most common causes of livestock poisoning. Generally, sheep are exposed when leaves and limbs blow off a tree and fall into a pasture. While the wood itself is not toxic, the leaves are, as they produce cyanide.

Toxicity from this plant is difficult to reverse. In fact, in most cases, poisoning will happen so quickly that you don’t have a chance to react. Your animal might suffer from convulsions, stagger around a bit, and ultimately fall and die.

While being proactive by not planting plants that are poisonous to sheep and getting rid of potential toxins is your best bet at keeping your sheep safe, the reality is that accidents happen. You might miss a plant, misidentify it, or worse, have your sheep get out on you and nibble on things they aren’t supposed to.

If you know your sheep have eaten things they shouldn’t, keep an eye out for the following symptoms. They can indicate that veterinary care is necessary and include:

If you notice one or more of these symptoms and know your sheep have eaten something they shouldn’t, contact your vet as soon as you can.

Other Things That Are Toxic to Sheep

Other things can be toxic to sheep, too, and should be kept far away. It’s not just plants that you need to watch out for!

Copper is one of the most well-documented toxins for sheep. Sheep are sensitive to copper because their livers accumulate the mineral more readily than those of other animals. Though essential for sheep, an excess of copper can lead to symptoms like appetite loss, anemia, bone weakness, poor wool coverage, and more.

In extreme cases, it can be fatal. Provide your sheep with a mineral supplementation meant just for sheep – don’t use one for goats.

Algae, particularly blue-green algae, can cause symptoms that mimic those of an allergic reaction in sheep. The symptoms tend to appear out of nowhere, causing a sheep to convulse and often to die. Since algae are most often found growing in stagnant, warm water, it’s important to replace and refill water (and clean the troughs) regularly.

Sheep won’t willingly eat insects on their own, but blister beetles are often found hiding in alfalfa hay. This is a common hiding spot for the beetles, which contain a toxic substance known as cantharidin. It can kill sheep even in small quantities.

First-cut hay is less likely to be contaminated than late-harvested hay – the insects haven’t swarmed yet when it’s still early in the season. Consider buying only the first cut if possible to prevent these beetles from sickening your sheep.

Also known as acidosis, grain poisoning can occur when sheep eat large quantities of grain. It causes carbohydrates to be released into the rumen where they ferment instead of being digested.

It can cause your sheep to suffer from symptoms like bloating, dehydration, and diarrhea. In severe cases, acidosis can kill a sheep.

Mycotoxins are substances produced by molds. They can be harmful to many kinds of animals and infect sheep through contaminated bedding or food – particularly those that exist in a moist, warm environment.

Keep your storage and housing areas clean, cool, and dry. Prevention is key in keeping your sheep safe from mycotoxins!

What to Feed to Sheep Instead

Again, the good news is that sheep are tough, versatile creatures. They’ll eat just about anything, but you must limit the amount of dietary exploration they do – stick to hay and a little bit of grain, and you’ll be in the clear.

If you want to learn more about what to feed to your sheep, be sure to check out this helpful feeding sheep article.