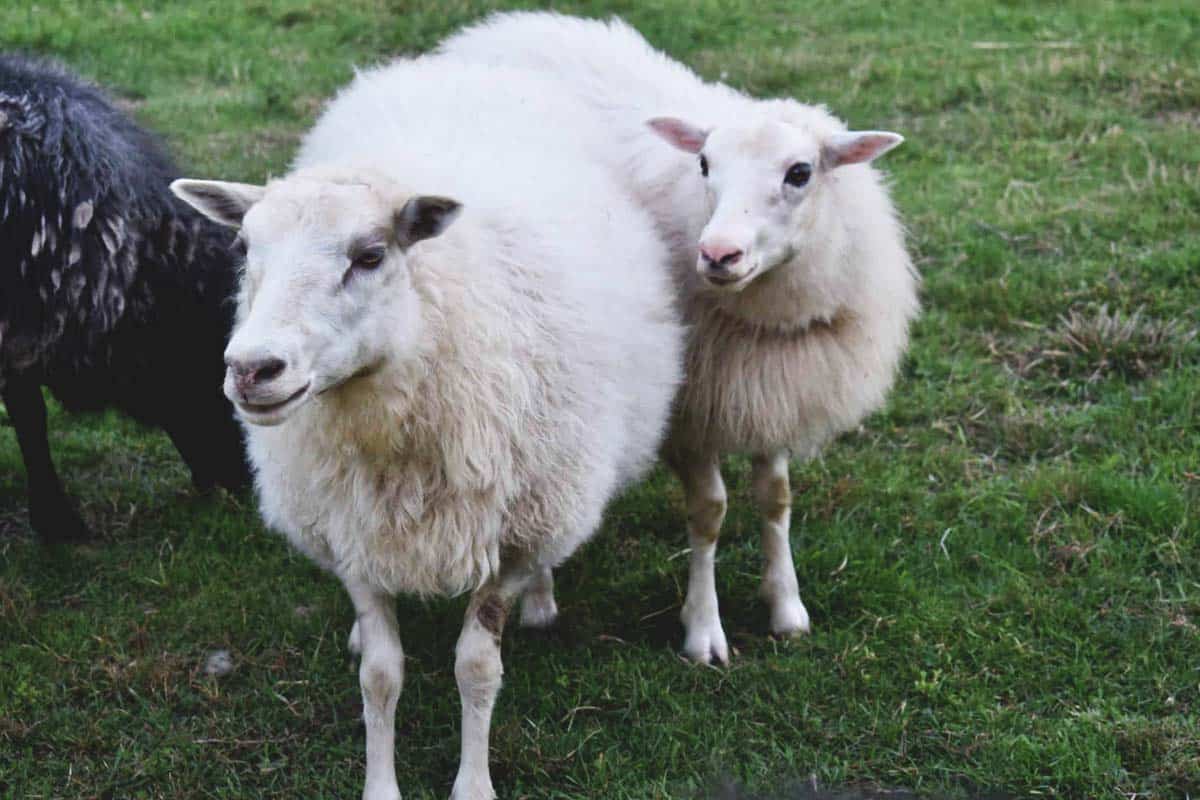 One of the world’s oldest breeds of sheep, the Icelandic sheep has been around for more than 1100 years. Yet it’s often overlooked as one of the best breeds of sheep for small farmers. This is likely because shepherding has largely gone by the wayside as a form of agriculture in the United States.

However, there’s a lot to be said about raising sheep. They can produce meat, milk, fiber, and even lanolin. As a result, sheep is one of the best kinds of livestock you can raise.

Of all the dozens of sheep breeds out there, the Icelandic sheep is great for small farms. Here are some of the reasons why you should treasure – and consider – them for your farm.

What is the Background of the Icelandic Sheep?

One of the purest sheep breeds in the world, the Icelandic sheep is a descendant of the Northern European short-tailed sheep. This is a category of domestic sheep breeds that possesses a naturally short, fluke-shaped tail.

Icelandic sheep are unique in that their fleece is dual-coated. In addition to the classic white, these sheep can be found in a variety of other colors. They are also found in both polled and horned types.

A cold-hardy breed, Icelandic sheep are descendants of the same breeding stock as Norwegian Spelsau. They were brought to Iceland by some of the first settlers. They were bred for hundreds of years in this harsh, unforgiving environment.

Therefore, Icelandic sheep are some of the most efficient sheep you will find. They are fond of eating forbs as well as grasses and some browse. As seasonal breeders, they can be mated as early as five to seven months of age. Multiple births are quite common, with twins, triplets, and even quadruplets, quintuplets, or even sextuplets occasionally born.

Today, the population of sheep in Iceland outnumbers the human population at a ratio of three to one – at least, before the annual slaughter, anyway. Icelandic sheep are allowed to roam wild there, grazing all the way up into tall mountains to search for edible moss and other forage.

A mid-sized breed, this sheep is short-legged and relatively stocky, found in a variety of colors and patterns. You can find Icelandic sheep in white, as well as some that are naturally gray, black, brown, or mixed.

In fact, Icelandic sheep have more variety in their patterns and colors than almost any other breed. They have unique variations that cannot be found in other sheep breeds. Black is a dominant color, but there are several other patterns and shades you might see, too.

For example, badger face colorations are common among this breed. This is a light coloring on the face, neck, ears, sides, and back of the sheep, with a darker color on the belly, around the eyes, and on certain sections of the neck. You might also find Icelandic sheep that are “mouflon.” This means that they are light-colored but otherwise possess similar coloration as the badger face style.

Icelandic sheep are unique in that they almost always have some kind of pattern in their wool. Solid colorations are relatively rare. A sheep must inherit a solid pattern from both parents in order to display this coloration itself.

Ewes of this breed generally reach about 120 to 145 pounds, while rams can be as large as 220 pounds.

Typically, Icelandic sheep are bred for meat. They do not need to be fed any grain or given any kind of growth hormone in order to put on dense, healthy growth. Therefore, these sheep are inexpensive to raise to full slaughter weight.

Lambs are ready for the freezer as early as four months of age. They usually weigh about 70 to 90 pounds by the time they are ready for slaughter.

It’s not only the quick production of the meat that is beloved by producers, either. Icelandic lamb has a unique flavor, with a fine grain and a delicate taste that is considered gourmet by many chefs.

If you are interested in raising sheep for wool, don’t worry – you can raise Icelandics for fiber, too. While most people raise this breed for meat, Icelandic sheep are known as “tri-purpose” sheep. This means that they can be raised for fiber and milk, too.

Icelandic fleece is dual-coated, with the long outer coat referred to as “together” in the Icelandic tongue with the inner coat known as “Þel.” These two coats can be separated and used for different finished products. The outer coat tends to be medium thickness wool, perfect for weaving and the creation of other tough products.

The inner coat, however, is finer, and best for garments that sit close to the skin. The two coats can also be used together to produce “lopi,” which is knitting wool that can only be made from Icelandic fiber.

The double-layered coat isn’t just beneficial to you, as the farmer looking to harvest the wool, but it’s also beneficial to the sheep. It is well-suited to cold, wet conditions, repelling water and keeping the sheep warm. This is part of what helps make the meat of the Icelandic sheep so fantastic, too.

Icelandic sheep can be shorn twice a year. The wool from the spring shearing tends to be quite coarse. It is used to make carpets. The best, most valuable wool comes from the fall shearing, which is then used to make garments.

Icelandic sheep are not milked commercially in Iceland today, but this was a common practice until the mid-1940s. The switch was made likely as a result of the increased prevalence of dairy cattle and the development of mechanized haying. This made it easier to raise dairy cows throughout a long, cold winter.

However, many people continue to raise Icelandic sheep for milk on a small scale on their farms today. Icelandic lambs can be weaned after just two weeks. The ewes can then be milked daily for at least six weeks, producing about a liter or two of milk each day.

The milk from Icelandic ewes is surprisingly sweet and creamy. It can be consumed directly or used to make a variety of value-added products, including skyr, a soft cheese, as well as yogurt, butter, and other cheeses.

Icelandic sheep are prized by farmers and homesteaders because they are efficient breeders. As seasonal breeders, they come into estrus in October, with a breeding season lasting as long as four months.

While ewes can’t breed until they are at least five to seven months old, rams are ready to breed as early as five months of age. Although many farmers can – and do – breed ewes younger than one year, it’s also common for them to wait until the ewe’s second year to allow her to breed.

If your Icelanders are not bred in the fall, they will continue cycling until the spring. Rams remain sexually active year-round.

Icelandic lambs are known for their vigor. In a set of twins, the first lamb is typically up and nursing before the second twin arrives. Mothers will often have lambs nursing before they’ve even gotten up onto their feet!

Ewes have excellent tendencies towards motherhood, and lambs are rarely lost to common lambing diseases like pneumonia. Lambs are frequently born – and survive – in the chilliest parts of late winter or early spring, and since their immune systems are so reactive and strong, they can even be born on pasture.

Why You Should Consider Raising Icelandic Sheep

The Icelandic sheep is the perfect animal for someone who is new to shepherding and would like an easy introduction to the hobby. Sheep can be difficult to raise when you consider predator pressure, fencing, and feeding – but the Icelandic sheep make it all much easier.

Icelandic sheep are not “improved breeds.” In other words, they haven’t had their wild characteristics bred out of them over many years of domestication. Instead, their genetics are very close to the sheep that would have run around Iceland with the Vikings.

These sheep are tough and resilient – smarter than commercial sheep and presenting a ton of other benefits to small farmers, too.

Icelandic sheep have evolved over 1,100 years to be able to withstand difficult farming conditions. They are feed efficient and can survive on just browse and pasture – no grain necessary.

Speaking from experience, I know that it is possible to raise a slaughter-ready meat lamb on good grass and browse after just five or six months. You don’t need to have a ton of experience in raising sheep in order to try this breed. They are self-sufficient and incredibly hardy.

When provided with just a bit of good pasture and fresh, clean water, the Icelandic sheep breed can easily be considered the best breed of sheep for your small farm.