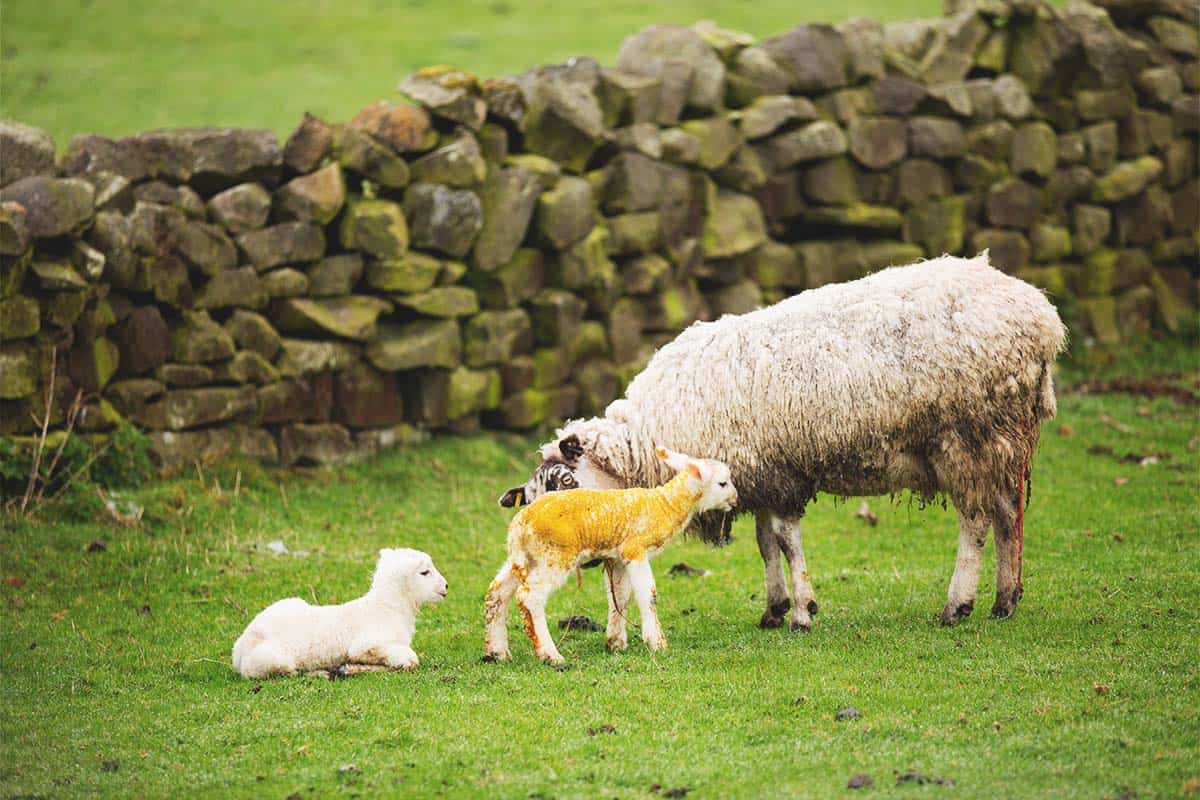 This week, we were excited to bring four new lambs to our farm! Born to sister ewes (two apiece), the lambs were the first of the season but not the first we’ve ever had here.

The ewes, new to the farm, had some sheep birth complications that presented themselves at lambing time. Luckily, we were able to resolve them quickly – but not without a lot of Googling and calling around to friends who knew what they were doing (more than us, for sure!) when it came to raising animals.

However, what was clear was that it’s tough to find a lot of reliable information when it comes to lambing. Most of the time, ewes can birth their own lambs completely unassisted, but sometimes, there are issues that can present themselves unexpectedly.

Being aware of these issues ahead of time – as well as how to address them – can make the difference between life and death for vulnerable lambs and ewes, so it’s important to educate yourself early on.

In this article, I’ll tell you about the most common sheep birth complications that can occur and primarily affect the ewe. If you want to learn more about lamb-specific issues, make sure you check out this article.

What Are Some of the Most Common Sheep Birth Complications?

Before telling you about the various sheep birth complications that can arise, it’s important to note that intervention is seldom necessary during lambing. You should only intervene if an ewe has been in active labor for more than an hour.

Although it can affect ewes of all kinds, those carrying multiples or in poor condition are more susceptible. It happens due to a lack of adequate nutrition in the final weeks and presents itself as an ewe that will not eat, isolates herself, and lies down frequently. You will need to administer glucose as soon as you notice that she stopped eating.

If you don’t notice this disease in time, it has the potential to kill both the sick ewe and her lambs, who won’t be able to nurse.

There are all kinds of ways a lamb can present itself incorrectly within the ewe. Ideally, a lamb will come out with its head and forelegs first.

We experienced our first malpresentation last weekend, when one of our ewes attempted to give birth to a lamb with its head and only one front leg presented. We ended up not having to intervene – the ewe was able to reposition the lamb herself, somehow – but in most cases, you will need to push the lamb’s head back, flex the shoulder, elbow, and knee joints of the retained leg, then carefully extend the joints to present the other foot as well.

It’s also possible for both legs to be retained inside the ewe or for the lamb to come out backward. You may need to turn a lamb while it’s still inside the ewe or call a veterinarian to conduct a Caesarian section to remove it. Either way, it’s important that you act quickly to intervene. A few wasted seconds can cause the lamb to suffocate and die.

If your ewe has been straining for more than two hours and suddenly stops, she needs to be examined. Sometimes, she may be overfilled, and other times, there is another issue going on. A lamb might be backward or breach or she could be trying to present two lambs at once. If you continuously disturb an ewe during second-stage labor, she may also stop straining – this is why it’s important to let your ewe do her thing!

Ringwomb – don’t get this confused with ringworm – is when the cervix fails to dilate all the way more than six hours after the first fetal membranes appear at the vulva. It’s unknown why this happens and it can be tough to catch. You’ll have to be vigilant about when the ewe originally went into first-stage labor, which is easy to miss.

You can try to gently manipulate the cervix with a gloved hand, but you should only try this for about ten minutes or so. If it doesn’t work, you run the risk of infection. Contact a veterinarian, who can use calcium, smooth muscle relaxants, or other treatments to help the ewe progress.

There are plenty of sheep breeds that are prone to twinning – our breed, the Icelandic is one of them.

Unfortunately, ewes sometimes try to birth two lambs at once. This can lead to an odd combination of legs and heads coming out – and obviously, not everything is going to fit.

You may need to trace which leg goes back to which head and then apply lambing ropes to ease the retrieval. You will need to hold one lamb back and gently pull the other. This is very difficult to do without injuring a lamb, so again, veterinary assistance is recommended.

Before lambs can nurse, an ewe needs to have her wax plug stripped. The wax plug is found in the teat and prevents milk from flowing. In some cases, the plug will be stripped on its own. In others, the lambs will be able to extract it.

However, in most cases, you are going to need to help get the wax plug out. During our first season of lambing, we were very lucky to have ewes who shed their wax plugs very easily. This year, our two sister ewes had poorly conformed udders and their wax plugs hung right in there.

The first ewe was able to remove her wax plug on her own once her babies started suckling. The other ewe was not so lucky. We bottle-fed the lambs for nearly two days, worried that she had mastitis. We had tried with no success to strip the plug and decided to give it one last try before calling the vet.

After five or six minutes of firm massaging, we were finally able to remove the plug and release the milk that had built up in her bag. You could see the relief on her face!

You’ll know it’s a wax plug issue if the ewe has a swollen, full bag that is producing milk. It should feel warm but not hot – just around body temperature or even slightly above. If it’s hot, that’s likely mastitis (but this is less likely if she hasn’t started letting milk yet). The bag will also not be rock-hard. Firm, but not solid.

Make sure you get this wax plug out before you leave the ewe with her lambs for the first time. You need to make sure the lambs have access to colostrum. Allowing the milk to build up in the bag is also very painful for the ewe.

Sadly, prolapse is a major cause of ewe deaths when it comes to lambing. It’s more common in ewes carrying multiples, although overfeeding and obesity can also lead to this issue. Be careful and mindful of how much you are feeding your ewes, especially close to lambing. Carefully watch for signs of prolapse, which presents as a red mass – the uterus – being pushed out of the vulva.

There are plenty of treatments to help address this issue, but it’s important to detect the issue early on. You may need to contact a veterinarian or use a device like a restraining harness to keep things contained.

Hypocalcemia appears during the last four weeks of pregnancy and is usually related to an imbalance of calcium in the diet. Often, it’s because the lamb’s need for calcium is higher than what is being given to the ewe. Your ewe may appear to be unsteady before eventually lying down and entering a comatose state.

Hypocalcemia can only be treated with a calcium injection. If caught early enough, the symptoms will improve almost immediately.

Listeriosis is not the most common sheep birth complication, but it can happen when ewes are fed silage in late pregnancy. Silage is sometimes contaminated with the bacteria that cause listeriosis. When the grass is cut too low and incorporated into silage, the ewe can then suffer the consequences. Symptoms include having no appetite, fever, being uncoordinated and excessive salivation.

Antibiotics are necessary to treat this disease, which can cause mild to severe paralysis and confusion.

Mastitis technically arises in the few weeks following lambing. While it is an issue that can prove fatal to young lambs, it is also dangerous for a mother.

A ewe suffering from mastitis may not allow her lambs to nurse. Her udders will become swollen, hot, and painful. The amount of milk that the lambs can access will be reduced. There may be chunks or even blood in the milk that she does expel.

If your ewe has mastitis, you will need to contact a vet to administer an antibiotic and an anti-inflammatory.

Toxoplasmosis is rare in the United States but is very common overseas. It’s so common, in fact, that medical experts in the United Kingdom have recommended that pregnant women avoid assisting with lambing to avoid exposing themselves to the bacteria.

This disease is caused by a protozoan found in the soil. It is spread by cats and can cause abortion in late pregnancy. It can also result in stillbirths or weak, unthrifty lambs. The best way to prevent this disease is with good pasture management. A live vaccination is also available but it must be administered prior to tupping.

What To Do If Sheep Birth Complications Arise

Still not sure what to do? If your ewe is not recovering from birth or is experiencing a birth complication that you don’t think you are equipped to handle, it’s important to contact a veterinarian.

Having the phone number of a vet on hand before lambing begins is the smartest thing you can do. This can prevent unnecessary stress and delays when issues happen to arise.

Remember, though, that most of the time ewes can give birth on their own with absolutely no complications or issues. Just sit back and let them handle things – but be there to lend a hand when necessary.