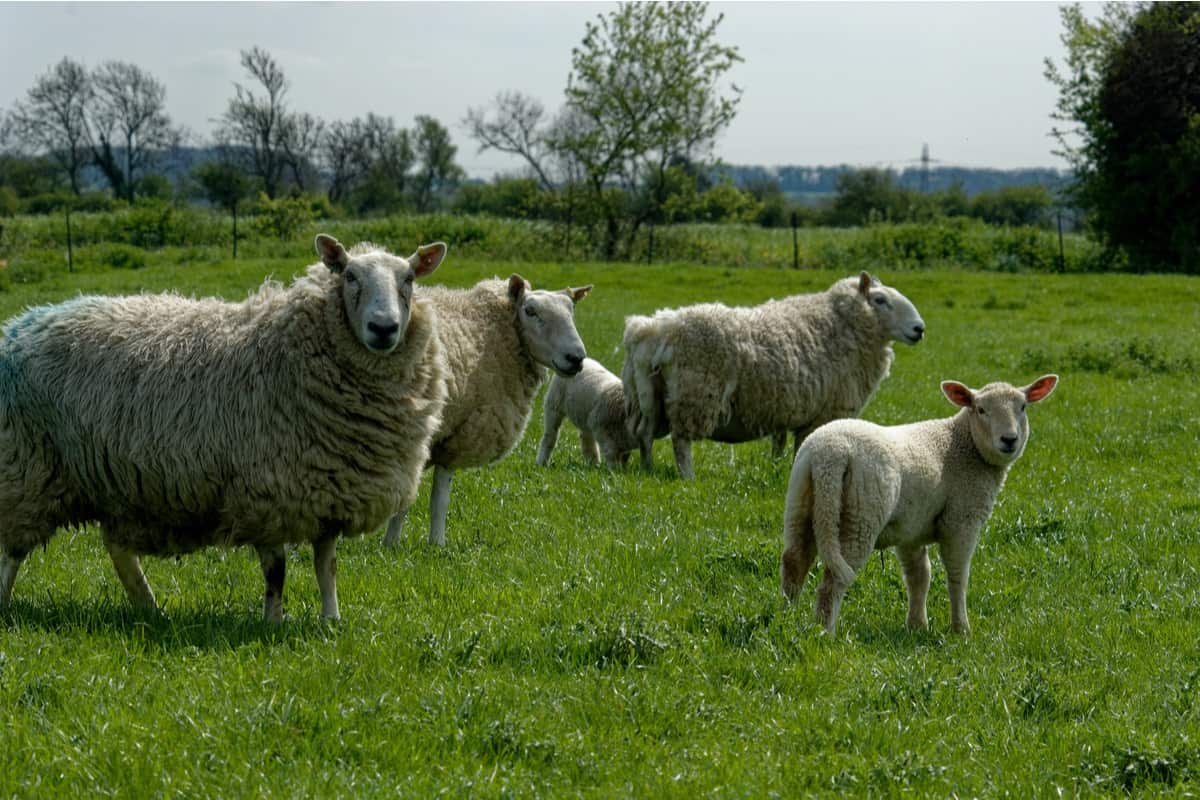 Not too long ago, I purchased a livestock trailer from a sheep farmer a few hours from where I live. Upon arriving at his farm, I discovered that he was raising sheep that looked a lot different than my flock of Icelandics.

His sheep were vigilant, with upright ears that made them look almost like rabbits. This was a sharp contradiction to the ears of my Icelandics, that laid flat against their heads.

These sheep were friendly and alert, bouncing around their paddocks as they munched on their dinner.

I asked him what they were, and he told me, “Cheviots.” Cheviot sheep are distinctive-looking sheep that are hard to confuse with any other breeds.

There are plenty of reasons to consider raising them.

Like any breed of sheep, there are also some special considerations you will need to make for this peculiar breed..

What is the Cheviot Sheep Breed?

Cheviot sheep are known for their hardiness.

They handle both the bleak, windy condition of Scotland along with the cold winters of Australia with ease. They also have the ability to forage easily during hot, dry summers, when feed is more scarce.

These sheep are not picky eaters.

A fast-maturing, resilient breed, Cheviots have distinctive white faces that are free of wool. Their legs, too, do not have any wool. They are generally white and hornless, prized for their long, soft wool.

Cheviots have black muzzles and black feet and hold themselves alert and lively. What’s really unique about these sheep, however, is their pricked ears. The erect posture of the ears makes the Cheviot look as though it’s always listening intently to everything you are saying.

You probably won’t be surprised to hear that the Cheviot breed originated in a region of the same name. This was on the border of Scotland and England: the Cheviot Hills. This sheep breed offers farmers a lot of benefits, particularly those located in the US or Australia.

Cheviots were first introduced to the US in 1838 from Scotland.

However, they were around long before then, having been recognized as one of the hardiest sheep breeds as early as 1372.

Developed in the bleak mountains of Scotland, Cheviots were originally called Long sheep or White sheep. The Cheviot is a mountain breed of extreme hardiness.

They were known for producing an excellent quality of wool and meat in the cold hill country. Today, Cheviot sheep are most common in north Northumberland and the Scottish borders of the United Kingdom.

However, they are also commonly found in Ireland, Wales, southwest England, New Zealand, Australia, Norway, and the US.

A dual-purpose breed, Cheviot sheep can be raised both for meat and wool. There are several variants of the Cheviot sheep that have been bred into existence. These include the Border Cheviot, the Brecknock Hill Cheviot, the North Country Cheviot, and less commonly, the Wicklow and Western Hilly Cheviots.

There are countless reasons to raise the Cheviot sheep breed – beyond their attractive appearance!

Cheviot sheep offer some of the best wool quality of all breeds around. It’s not necessarily the softest wool you’ll use in your spinning and weaving.

However, it has a distinctive quality known as a helical crimp. This crimp gives the wool remarkable resilience and durability. Because of this, Cheviot wool is frequently blended with other yarns to give it a stronger and more long-lasting quality.

Dense and long-stapled, this fleece is springy to the touch. The average ewe will produce a fleece that’s around 5-10 pounds. It has a micron measurement of about 27.0-33.0.

As I mentioned, Cheviot sheep have crimped wool that appears to spring back when you touch it. Because of this, they are also more resistant to flystrike and fleece rot, two issues that plague the sheep industry in just about every part of the world.

Not having to worry as much about flystrike, in particular, means that you can raise these sheep with fewer dewormers and antiparasitics. This reduces your time involved in management and improves the health of your flock.

The Cheviot sheep breed is one of the few that can be raised practically anywhere. These tough sheep can handle both cold, wet winters along with hot, dry summers with hardly any issues.

While you’ll still need to provide the sheep with appropriate shelter and feed during these harsh times, they can more or less fend for themselves. They are rugged animals with the ability to find their own forage and tend to their own needs.

In addition to producing outstanding wool, Cheviot sheep also can be raised for meat. The lamb from Cheviots is known for being luscious and mild-tasting, and like the wool, isn’t particularly greasy.

The carcasses are muscular and grow at a moderate pace. Though they are a bit smaller than other meat breeds, the quality of the meat speaks for itself.

A Cheviot lamb is independent and hardy – but that doesn’t mean that Cheviot mothers don’t deserve a note of respect for their abilities.

Cheviot ewes are outstanding mothers, with even first-time mothers knowing exactly what to do during and after lambing. Most of the time, you’ll have few problems to worry about during lambing with these animals.

Although Cheviots aren’t generally raised for milk production, you don’t have to worry about ewes being able to feed their lambs, as they come into milk quickly and readily.

As I mentioned, the unique quality of the Cheviot’s wool means there is less work needed, on your part, to keep these sheep healthy. You won’t have to worry about drenching, crutching, or other tasks quite as often.

Not only that, but Cheviot sheep lamb easily and have strong mothering instinct so you’re less likely to need to intervene during lambing.

They also have hard black feet that don’t succumb to footrot as easily as those of other breeds. You’ll still need to trim hooves and make sure you’re keeping them generally healthy, but ultimately, foot problems are less of a concern.

Another benefit of raising Cheviots from a management perspective is that, despite producing ample amounts of high-quality wool, they don’t grow wool on their faces. The benefit of this is that, unlike other wool breeds, Cheviots are not prone to wool blindness.

Cheviot sheep are active and agile. They are extremely intelligent and while this is certainly yet another benefit to add to the list, the downside of this level of intelligence is that they tend to do what they want, when they want to do it.

Though frequently raised by hobbyists, it’s a good idea to acquaint yourself with the basics of sheep handling if you choose to raise Cheviot sheep. They don’t have great flocking instincts and therefore, can be more challenging to herd (even if you are lucky enough to have a herd dog).

That said, if you’re trying to train a herd dog to have more advanced skills, Cheviots are the perfect challenge. They are also wonderful for children in 4H who are interested in raising these sheep for show purposes.

How to Raise Cheviot Sheep

Raising Cheviot sheep is not unlike raising sheep of other breeds. You’ll just need to make sure you provide them with adequate forage and a bit of shelter during extreme weather.

However, you don’t need to worry too much about the extent of this shelter, since Cheviot sheep can more or less fend for themselves in all but the most extreme conditions. A three-sided barn is typically sufficient.

Cheviot sheep have no known health issues and ewes are seasonal breeders with a 90% lambing average even under harsh conditions.

The one thing to note about caring for Cheviot sheep is that, since they don’t have strong flocking instincts, they won’t graze in a normal v-shaped flock pattern. They often won’t even graze together, instead preferring to spread out and graze the entire landscape.

Because of this, if you plan on rotational grazing, you may need to be more vigilant about installing separate fences for individual paddocks to keep them contained.

Is the Cheviot Sheep Breed Right for Me?

If you are looking for a breed of sheep that produces quality wool while being hardy and frugal on feed, then the Cheviot might be what you’ve been waiting for.

They are known to have excellent temperaments with great mothering skills. This makes it perfect for those who want to raise their children alongside animals or simply enjoy having them around as pets.

So while Cheviots have their fair share of challenges and considerations to bear in mind, if those features sound like what you’re looking for in your flock of sheep, you may want to consider raising this breed on your farm!