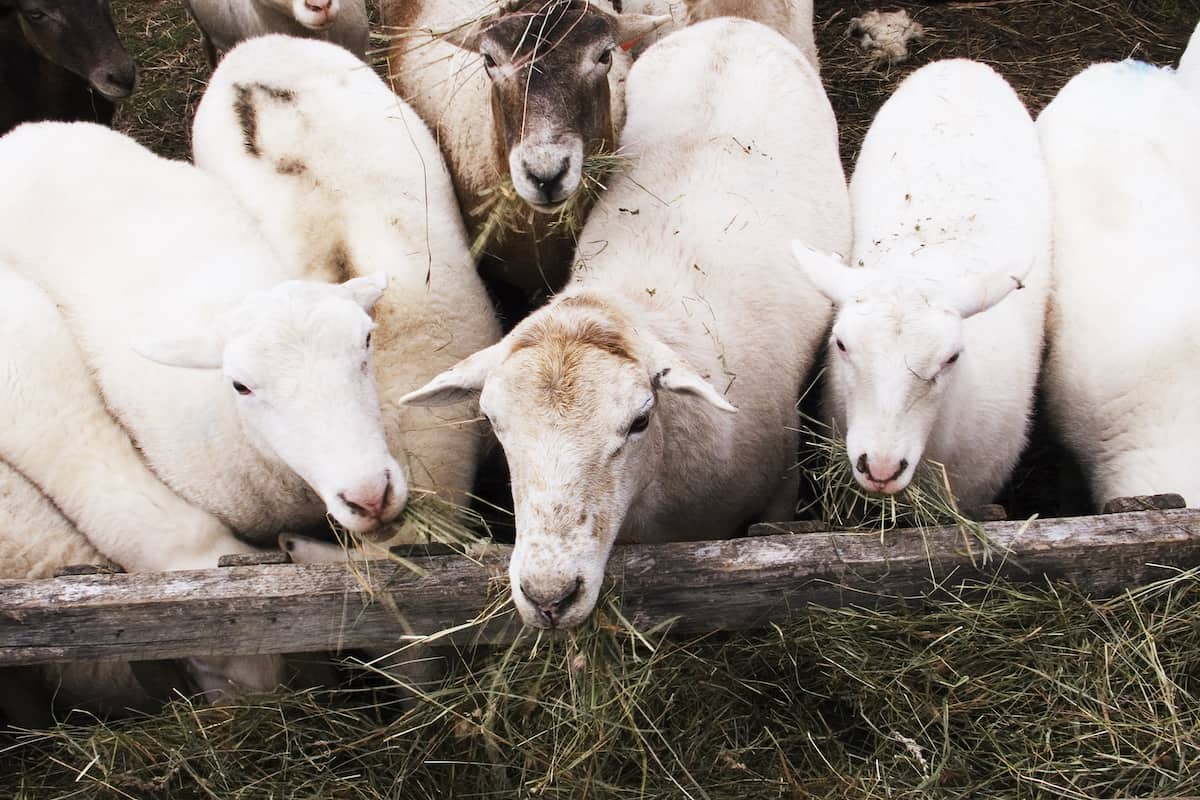 Raising sheep is not solely about the wool – and this is a fact that tends to surprise people!

In fact, when I first started raising sheep and was asked what I planned on doing with the wool, it always surprised people when I responded, “I don’t know. Why? Do you want it?”

The reality is that you can raise sheep for many other purposes, including meat (which is what my sheep are raised for) and milk. Where I live, there isn’t much of a market for selling wool and I have no interest in spinning it myself.

However, the wool still needs to be removed to ensure the health of my sheep, which is an additional expense (not to mention a chore) that I have to factor into my annual budget and planner. Had I thought more about this ahead of time, I probably would have chosen to raise a hair sheep breed instead of a wool producer – that way, I wouldn’t have to worry about the wool.

What are hair sheep, you might ask? They are simply breeds that produce hair instead of wool. There are all kinds of hair sheep breeds you can choose from, and plenty of reasons to consider them instead of traditional wool producers.

Why Would You Want to Raise Hair Sheep?

Did you know that just about all sheep descended from the Mouflon, a breed of wild sheep that have long, coarse hair with soft down underneath? Although these sheep are now few in number (it’s estimated that just over 10% of all the world’s sheep are hair sheep), there are lots of reasons why you might want to raise one of them.

For starters, hair sheep are often better suited to certain environments (such as warm or humid climates) than wool sheep, thriving in hot climates because they can simply shed their hair rather than needing to be sheared.

They are prime candidates for meat and leather producers, and many hair sheep can be raised for their milk production, too.

The biggest benefit of raising hair sheep is that they do not need to be sheared. Although this is simply an accepted part of the game for many sheep producers, the reality is that it doesn’t have to be. You can raise sheep without constantly needing to shear them!

Technically, all sheep have both wool and hair fibers. What differentiates between a hair sheep and a wool sheep is that hair sheep have fewer wooly fibers and more “hairy” fibers.

Interestingly, there are some studies that show that certain hair sheep breeds (like Katahdins and Dorpers) are more resistant to parasites, too. This is likely because these breeds originated in hot, humid areas (like West Africa) where parasite challenges are high. As a result, many hair breeds developed a form of resistance to dangerous parasites, like barber pole worms.

If the information above is appealing to you, you might want to consider raising hair sheep instead of wool sheep on your farm. Here are some of the most popular hair sheep breeds in the world (though this list is by no means exhaustive).

Katahdin sheep were developed in Maine, named after the state’s tallest peak. Bred during the latter part of the 20th century, the Katahdin is a descendant of the St. Croix sheep and several other breeds, like the Suffolk.

This sheep is prized for meat production, with the average ewe weighing up to 160lbs. Rams can tip the scales at 250lbs! These sheep are known to produce twin lambs and do not have to be sheared, instead, they shed their winter coats.

One of the most common hair sheep breeds, the Barbados Blackbelly is a sheep breed with much-disputed origins. Although some people believe these sheep originated in Africa, others think they are from Barbados.

Regardless, the sheep first arrived in the US in the early part of the 20th century. Best raised in warm climates, they regularly produce twin lambs and are great meat producers. They reach market weight much faster than many other breeds. The average ram will grow to about 150lbs – not the largest, but not the smallest, either.

Barbados Blackbelly sheep are also naturally polled (without horns) so this can eliminate some management concerns related to safety, too.

A breed of domestic sheep from Wiltshire, England, the Wiltshire Horn is raised predominantly for meat and sheds its coat of short wool and hair in the spring. These sheep are known for their excellent fertility and good mothering skills. Lambs are ready for slaughter in as little as 16 weeks.

They are also resistant to flystrike, a valuable trait for people raising large flocks of sheep.

The California Red is one of the most easy-to-manage sheep breeds and is therefore prized by homesteaders with small children or other livestock. It is a great milk and meat producer, with rams growing to more than 220lbs on average.

Out of all of the hair sheep breeds, though, California Reds may require a bit more management in terms of their fiber. Although they are considered hair sheep, they do put on a bit of wool, too, so minimal shearing may be necessary at times. In fact, these sheep were bred from Tunis and Barbados Blackbelly sheep in an effort to produce a hair-sheep breed similar to the Barbados Blackbelly but with the out-of-season breeding qualities of the Tunis.

Although the effort to produce a true hair sheep failed, the California Red is still a good breed to consider. It can lamb out of season and does well in hot weather, possessing red-tan hairs intermingled with a bit of white wool.

Blackhead Persian sheep are native to the Caribbean and to Somalia. They are somewhat odd-looking sheep with stocky, compact bodies and fat rumps.

These sheep produce excellent meat, but they are known for some issues at lambing time. You may have to provide additional assistance if you plan on raising these sheep as breeders.

As you might expect from the name alone, St. Croix sheep are native to the island of St. Croix in the Virgin Islands. Therefore, they are sometimes also referred to as St. Croix sheep.

Found in variants of white, black, and brown, these sheep are descended from African sheep that were brought to the Caribbean on slave ships. They do not grow wool and instead produce hair. They are largely parasite-resistant and are typically polled with no horns, too.

The Africana sheep is not the most common kind of hair sheep you can raise but is one of the most heat-tolerant. It is native to Venezuela and Colombia, primarily raised for meat. It is also a polled breed.

Also known as the Laudom or White Arab sheep, this large breed is found predominantly in Africa, in countries like Senegal, Mali, and Mauritania. It is raised both for dairy and meat production and, at first glance, looks more like a goat than a sheep. In fact, the Touabire sheep have lop ears and a somewhat gaunt appearance. Males have horns, while ewes tend to be polled.

A medium-sized sheep, the St. Augustine is well-adapted to hot, humid climates and has good parasite resistance. It is an easy-to-handle breed with good flocking instinct and the ability to handle most types of forage with ease.

This sheep can be polled or horned and sheds its hair in the summer (though there are some that have a light layer of wool as well). The meat is known for being mild in flavor and rams of this breed are unique in that they are fertile during the summer months when most other breeds are not.

The mouflon is technically a wild sheep breed though there are several subspecies that have been developed. These hair sheep thrive in primitive settings and are thought to be the ancestor for all modern breeds of domestic sheep.

Another uncommon hair sheep breed is the Uda, an African long-legged sheep native to Cameroon, Nigeria, Niger, and Chad. There are several varieties of this hair sheep, which are typically raised for meat. Most are brown/black and white. Ewes are polled while rams are horned.

The Maasai, or Red Maasai, is a sheep breed that is used for meat production. It has a fat tail and is typically raised by farmers in East Africa, along with the Maasai in Kenya, Uganda, and Tanzania.

American Blackbelly sheep tend to be smaller, too, with rams growing to about 140lbs. However, they are prized for their resistance to parasites.

A South African breed of domestic sheep, the Dorper is a cross between Blackhead Persian and Dorset Horn sheep. It is a meat sheep that is well-suited to the dry areas of the country and is a fast-growing producer. It sheds its short coat of wool and hair each spring. Furthermore, it has been used in the production of many other sheep breeds, too.

A breed of domestic sheep native to Russia, these hair sheep are unique in that they are native to a colder climate. One of the oldest short-tailed sheep breeds, Romanov sheep grow large and are known for their exceptional fertility. They tend to lamb in litters, unlike other sheep who are prone to twin births at best. Romanovs can have triplets, quadruplets, quintuplets, and sometimes, though rarely, even sextuplets!

Last but not least, the Royal White is a hair breed with unique body shape. It holds itself close to the ground, helping it lose very little heat during times of inclement weather. Rams weigh around 200 to 230lbs, on average, while ewes are almost just as large. The lambs are fast-growing and known to produce high-quality meat, too.

Is a Hair Sheep Breed Right for Me?

If you want to raise a flock of low-maintenance, low-cost sheep, you might want to consider choosing a hair sheep. It can be more difficult to find these sheep for sale if you’re looking to start a flock.

This is especially true if you live in a colder climate where hair sheep aren’t as common. However, the search is often worth it.

By reducing your flock’s shearing needs, you can reduce your expenses and the amount of time and effort it takes to raise a healthy, productive flock.