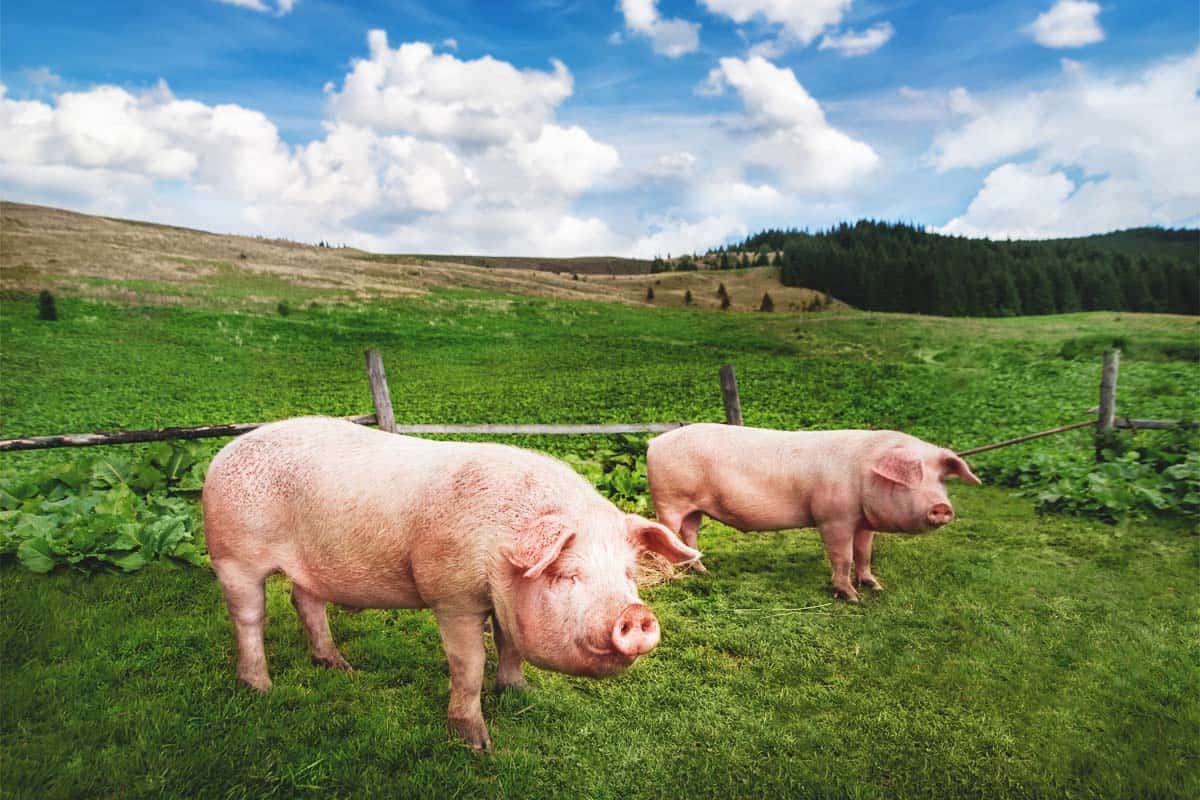 Pigs always get the worst rap, don’t they?

Ask people who might not be that familiar with raising livestock, and almost always, they’ll tell you that pigs are the smelliest animals.

To be honest, I have never found that to be true on my own farm (I think chickens hold the title of the stinkiest barnyard critter!). However, I’m also aware that much of raising pigs without all the infamous “stink” has to do with how they are raised.

Pigs are actually quite clean animals. The reality is that you need to give pigs plenty of room so that they can engage in their innate “piggy” behaviors. They’ll be much cleaner when raised on pasture.

Raising pigs on pasture is hardly a new idea. Pigs have been raised on pasture or on fenced woodlots for centuries! Trust me, “free-range” pork is the way to go – you just need to follow a few simple tips.

5 Benefits of Raising Pigs on Pasture

If you need a garden tilled, get your pigs on it!

We have used pigs for several years to clear spots of land where we want to graze other animals, like sheep or chickens, later. Pigs are indiscriminate feeders and will tear up pretty much everything. That can be bad news, of course, if you don’t rotate your pastures and mind your stocking densities.

However, putting pigs on a chunk of land for a set period of time is a great way to aerate and fertilize your soil – for free. Plus, they’ll love it.

When provided with fresh pasture, pigs will spend most of their day grazing. The benefits of this are tenfold. Not only will they spend less time aggressively rooting and destroying your pasture, but they won’t be focused on trying to figure out how to get out of the pen, either.

Plus, this will dramatically reduce grain requirements. As long as you rotate your pigs every two weeks or so, you can maintain healthy pastures that meet many of the nutritional requirements of your pigs.

It also makes excellent use of the space. If you’re planning on raising pigs with other animals, like chickens, you can double up on the benefit. You’ll find more information on raising pigs and chickens together here.

A very simple benefit of raising pigs on pasture is that it lets them stretch their legs. There are all sorts of problems associated with raising overweight hogs. In breeding sows, obesity can cause birth mortality and infertility. In grower pigs, too much fat wastes your money because it often has to be discarded at butchering time.

Providing pigs with pasture helps convert that energy to meat and muscle.

You can encourage your pigs to get even more exercise by installing gravity feeders on opposite ends of the pasture space. This will encourage the pigs to move around and also disperse manure evenly throughout the pasture.

Closely related to the last benefit is that raising pigs on pasture provides better quality meat and lard. This is anecdotal, but we have always found that our lard is purer and our meat is leaner and better-tasting in our pasture-raised pigs.

You can find more information on the benefits of pasture-raised lard here.

As long as you rotate pastures, keeping pigs on pasture is a great way to prevent parasites. This can reduce your reliance on chemical dewormers (better for your wallet and the pigs’ health, too!).

Usually, as long as you’re moving pigs every two weeks or so, you won’t need any dewormers to manage parasite loads in the soil.

8 Tips for Raising Pigs on Pasture

It’s important to consider the breed of pig you are raising before moving them to pasture. All pigs can benefit from pasture, but some do better and will tear up your pasture less than others.

Heritage breeds tend to be the most successful on pasture, while modern breeds may take some more acclimating to get used to the new setup.

Pigs do best on forages that are high in protein. You’ll want to plant a good mixture of legumes and grasses. Alfalfa works well, but pigs are such aggressive grazers that you might find that the alfalfa doesn’t last very long.

Some other good forage options include:

Rotating pastures is essential for raising any kind of animal on pasture, but especially pigs.

Pigs are infamous for their rooting behaviors. Left unchecked, these behaviors can completely destroy a pasture in a matter of no time.

To prevent this, you need to move them on a regular basis. How often you move your pigs will depend on where you have them housed, how many pigs you have, and what your production season looks like. At the bare minimum, though, you should be swapping out pastures every year to give the soil time to establish itself.

Otherwise, you’ll be running your pigs on a bare dirt lot, which is no better than raising them in a pen, in my opinion.

Between rotations of pigs, it might make sense for you to seed a cover crop, like winter peas, too. This will not only help rebuild the freshly tilled soil (pigs are nature’s best rototillers!) but will also give the pigs something to munch on when they return.

If you’ve never raised pigs before, I can’t emphasize this point enough – they are incredibly smart! It doesn’t take long for a pig to figure out a weak spot in a fence, and once it does, it will return to that spot time and time again.

Make sure your fences are strong enough to hold in an elephant! Three strands of electric fencing tend to work well for pigs and are a good option for most pasture types, too.

Raising pigs on pasture is an efficient way to lower your feed bill, but it shouldn’t be viewed as a complete substitution for grain and other feeds.

You still need to make sure your pigs are getting a balanced diet, through whatever it is you choose to feed them, and windfalls such as leftover-bread.

6. Don’t Forget Water and Shelter – and Watch Out for Wallows

Pigs raised on pasture will be much more self-sufficient than if you were raising them in a barn. You will rarely have to scoop poop, and besides feeding them grain every now and then, there’s not much maintenance you’ll need to do.

However, you do need to make sure your pigs have access to water and shelter. This last part can vary a bit depending on the conditions where you raise your pigs. If they’re in an open field, you’ll need to build, at the most basic, a three-sided shack or A-frame shelter where they can go to get out of the elements.

If you are raising pigs in the woods (and only during the warmer parts of the year), you can probably get away with just letting them hang out under the trees.

Also,  remember that in order for a pig to stay cool (and free from sunburn) in the dead of summer, it needs a wallow in which to cool off.

The one problem with raising pigs on pasture is that open fields don’t offer a lot in terms of shade. You may have to make your own wallows, which can sometimes be a problem. If your pigs aren’t provided with plenty of fresh, clean water on demand, they may resort to drinking water from the muddy wallows.

This can lead to a whole host of problems, including diarrhea, parasite infestation, and more. Your pigs may lose weight even though they are continuing to eat the same amount of food.

To prevent this, set your pigs up on an automatic waterer (ideally with nipple drinkers that will remain clean at all times). This will provide them with all the water they need so they don’t start drinking out of their “play” areas.

7. Raise More Than One

This is a tip for raising pigs in any setting, but especially when they’re being given the opportunity to “free-range.” Make sure you raise multiple pigs together at once!

Not only can the increased competition for food cause them to eat more aggressively (and put on weight faster), but it will also keep them occupied so they aren’t constantly looking for weak spots in your fence.

Raising pigs in a forested section of land is a good idea for several reasons.

Not only will your pigs have access to more shade, but they’ll have a variety of foods to munch on instead of just a few pasture species.

However, you do still need to be careful about rotating the pastures. The soil beneath a tree canopy is often more delicate than what you would find in an open field. It tends to be less widely vegetated, too, so erosion can become an issue.

When we first started raising pigs on my farm, we chose to raise them on pastured woodlots not because we thought it would be better – but because we had to. We didn’t have the time or money to build a confinement barn and decided to fence in a section of our somewhat wooded, somewhat swampy backyard instead.

We were told by plenty of people that raising pigs in this way would cause the meat to be tough and unpalatable. This would give them too much exercise and too much room to roam, we were told. The opposite was true, and throughout the years, even after trying multiple breeds of pigs, we have still found this to be the case.

Raising pigs on pasture can produce meat that is not only healthier but also better tasting. Plus, we rarely have to shovel pig poop – which is a win all in itself.