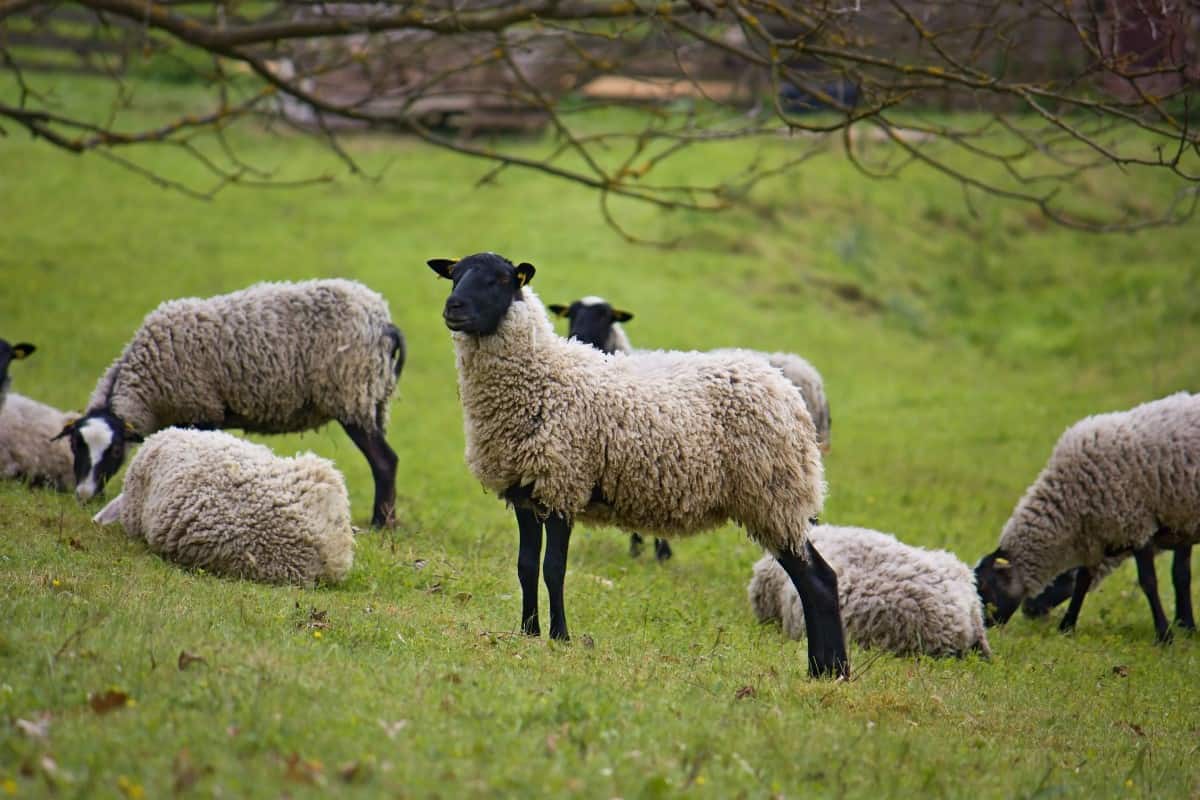 Choosing to raise sheep on your farm is an exciting decision.

Whether you are planning on starting a flock for meat, for wool, for milk, or just for the sheer enjoyment of doing so, you’ll find that sheep are some of the most enjoyable and even profitable livestock you can raise.

However, choosing the right breed can be a bit stressful. There are dozens of options out there, and knowing which one will suit your needs the best can be difficult.

If you’re thinking about raising sheep and you live in a cold climate, you might want to consider Romanovs. This sheep breed, native to northern Europe and Russia, is well-adapted to cold and snow. A beautiful breed, it is often crossed with other popular breeds and can be raised for wool or for meat.

Here’s what you need to know about this semi-uncommon breed.

The History of Romanov Sheep

Romanov sheep are native to the Upper Volga region of Russia. They first originated in the town of the same name, brought to areas outside of Russia as soon as the better part of the 1700s. They were readily imported to France and Germany around this time but weren’t introduced to Canada and the US until the 1980s.

Today, Romanov sheep are found all over the world but are best adapted to cold climates. They are usually raised for their meat but can also be raised for wool. They are hardy and versatile, known for their ability to feed on whatever forage happens to be available.

All Romanov sheep (unless they are crossed with another breed of sheep) are pure black when they are first born. However, they quickly change to gray as they age. Males weigh around 150-180 pounds while females will be around 100-150 when fully grown. Usually, they are polled (lacking horns).

Romanov sheep are frequently raised for meat. Although they aren’t the largest sheep you can raise, they grow quickly and reach maturity in just a few months. A mature Romanov weighs around 100-180lbs. The meat is known for being tender and flavorful. Plus, Romanov sheep are good at converting mediocre-quality pastureland to usable forage, meaning you can graze them in less than ideal locations.

Romanov meat is unique in that it is extremely mild and lean – there is no back fat on the carcass. Most Romanovs carry their fat internally in the kidney area so it is cut away when processed. You’ll yield about 50% from a dressed carcass.

Although Romanov sheep are best raised in a colder climate and will do well in this sort of environment, they can also be raised in warmer areas, too. As with all sheep breeds, providing adequate shelter is key to making sure your animals can weather all kinds of circumstances.

Uniquely, Romanov sheep become sexually mature much faster than other sheep breeds. They can technically start breeding at around 3-4 months of age. Many other breeds take twice as long.

Not only that, but ewes are known to lamb in litters. This is highly unique. Most ewes will give birth to singles or twins, but Romanovs can and frequently do lamb 4, 5, or even 6 young at a time!

Since they are fertile by the time they are just 3-4 months old, they can breed at any time throughout the year. This is an odd characteristic for sheep to have and is known as “out of season breeding.” Because of this, a single Romanov can be highly productive and lamb 3 times in 2 years, or once every 8 months.

Romanov wool, though often considered a “byproduct” of this breed, is some of the strongest and most resourceful. It is double coated and is usually a mixture of gray wool and black guard hairs. It is often used for mats, rugs, and wall hangings, though it is less commonly used for garments.

Again, most purebred Romanov lambs are born totally black. However, it is so common for Romanovs to be crossbred with other breeds that about half of all lambs are born completely white, tan, speckled, or grey. Therefore, it’s not unheard of to have Romanov wool in another color.

Romanov ewes are known for being excellent mothers. They produce high amounts of milk – plenty to feed triplets, quadruplets, or more – and are very attentive to their young.

This is yet another reason why many sheep farmers or producers choose to cross their Romanovs with another breed. Easy, prolific lambing and good mothering characteristics are both usually passed on despite hybridization with other breeds.

6. Alert, Hardy, and Easy to Care For

Lambing can be a challenge with any sheep breed. In fact, some sheep farmers will admit that lambs are born “wanting to die.” Young lambs suffer from issues such as hypothermia and malnourishment instantly upon birth and these issues can be hard to prevent and treat.

Fortunately, that is not the case with Romanov lambs. These lambs are known for being some of the most aggressive and hardy. Despite the fact that Romanov ewes frequently lamb in litters, their young tend to be remarkably self-sufficient.

Although most people will shear their Romanov sheep several times throughout the year, this isn’t always necessary, as many will shed during warmer months or at lambing. Romanovs also have short tails. There is therefore no need to dock tails.

1. Not The Largest Meat Producers

Romanov sheep are often raised for meat, yet aren’t the very best breed to raise for this purpose. Although they have characteristics that are highly desirable, they grow somewhat slowly and won’t get as large as other breeds (such as the Suffolk). In fact, Romanovs are often crossed with Suffolks.

That’s the easiest way around this challenge of raising Romanovs. Most producers will cross Romanovs with Suffolks, resulting in a sheep that not only has an excellent reproductive rate and mothering abilities but also grows large and quickly, too. You can truly get the best of both worlds with this kind of practice.

One of the biggest benefits of raising Romanov sheep also presents one of the largest challenges in management. They are never infertile at any point throughout the year. Most sheep breeds will not breed during various off-seasons. Therefore, you can raise these sheep together in the same paddock or barn without having to worry about “surprise” lambs.

That is not the case with Romanov sheep, which have no anestrous period. Because lambs reach sexual maturity so quickly – some can breed as young as 70 days old – it can be challenging to manage separate breeding herds.

The Romanov sheep is not considered a primitive breed like other breeds, such as the Jacob and Icelandic sheep. A primitive breed is one that has been mostly unimproved and of which the wool is never or rarely sheared. These sheep can mostly be left to their own devices, but are known for being incredibly skittish and jumpy around humans.

Despite not being a primitive breed, Romanovs are known for this sort of nervous behavior, too. Though admittedly not as hard to handle as other breeds – and relatively easy to train – the Romanov sheep can be a bit challenging to handle when the time comes to shear or assist with lambing.

You can raise Romanov sheep just about anywhere. However, you may notice that breeding abilities are reduced when the weather is exceptionally hot.

Is the Romanov Sheep Right For Me?

Although you will have to maintain separate housing and grazing facilities for ewes and rams if you don’t want year-round lambs (which can be a challenge for producers who find themselves lambing in the winter), there are very few disadvantages to this breed. That is especially true if you are able to find a Romanov flock that has been crossed with another breed of sheep, such as Suffolk.

If you’re looking for a hardy sheep breed for your farm, the Romanov breed might be the way to go. Unlike other sheep breeds that require a lot of work and management on the part of the farmer, that is simply not the case with Romanovs. The Romanov sheep breed offers a great introduction to sheep farming for beginning shepherds.