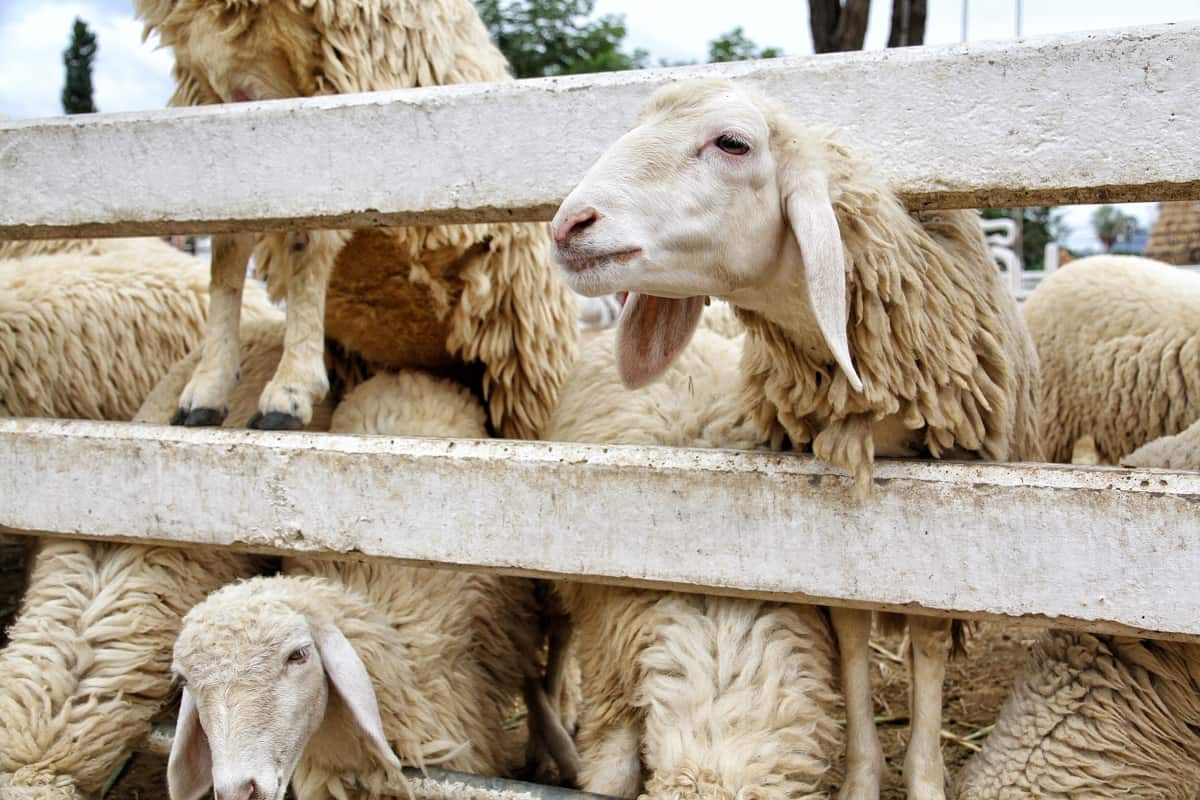 Raising sheep is a lot of work. You have to take care of them, feed them and keep them safe from predators. If you’re not careful, some more common mistakes you can make raising sheep can make the task seem even harder.

In fact, there’s a common saying among shepherds that sheep are born “ready to die.” That’s because it appears a sheep can be healthy one minute, then die the very next.

In reality, unexpected losses are usually because of the inexperience and inattentiveness of a shepherd – there are some common mistakes you can make raising sheep that are pretty easy to prevent (if only you know how to prevent them, of course).

Consider these missteps made by just about every sheep farmer who is just starting – hopefully, you’ll be able to learn from our mistakes and be able to do things right the first time!

Most Common Mistakes You Can Make Raising Sheep

When it comes to raising sheep – or any kind of livestock, for that matter – knowledge is power. Here are some of the most common mistakes you can make while raising sheep, along with tips on how these mistakes can be avoided.

All too often, people choose the first flock of sheep they find on Craigslist, deciding to bring them home without giving much thought to what (or how) they will be raised for.

This can lead to a lot of frustration – meat producers find themselves annoyed with the constant shearing required by wool breeds, people who want their ewes to lamb just once a year in the springtime, are surprised to find lambs dropped in the middle of the summer.

Think carefully about your reasons for raising sheep along with the unique characteristics of the breed you ultimately select.

Some of the best wool breeds include:

If you’re thinking about raising sheep for meat, consider:

Finally, if milk production is what’s on your mind, think about raising:

Of course, those aren’t the only variables to consider. When selecting your sheep breed, also pay close attention to the management needs (especially those related to lambing) of your animals along with any other characteristics that might matter to you.

2. Underestimating How Much Space is Needed

When raising other kinds of livestock, you may be able to get away with closer quarters – and pushing the upper limits of what might be acceptable in terms of stocking densities.

I highly discourage this for raising sheep.

Not only does raising sheep in close quarters make it far more likely that your sheep are going to be stressed, leading to potential health issues and loss of life, but you’re also going to increase your risk of parasitism dramatically.

Sheep are incredibly prone to parasite problems, perhaps more so than any other species of livestock. Therefore, do your best to give your sheep as much room as possible. The basic recommendation is 16-square-feet per ewe with lambing pens at around 25-square-feet. Rams need at least 30-square-feet.

Those are the bare minimums, however – I would add on a few square feet for insurance.

Although sheep aren’t quite as squirrely as goats when it comes to breaking out of a perfectly good fence, you still should think carefully about your fencing before you bring any sheep home.

Sheep aren’t good at figuring out how to get around fences, so most of the time, a page wire fence should do the trick. However, it needs to be tall enough that sheep can’t jump over it – and also not contain holes that are large enough for your animals to stick their heads through.

If you plan on rotational grazing (something I highly recommend and will address in more detail below), you need to be mindful of how you utilize electricity. Electric fencing works wonders for most livestock animals, but it can be challenging to use with sheep. That’s because their dense wool insulates them from shock.

That’s not to say that you can’t use electric fencing at all. Rather, you’ll need to use a high-joule charger and make sure the fence is always “hot.” Trust me when I say – your sheep will figure out when a fence is cold in a hurry and they won’t waste any time in escaping!

4. “Winging it” At Lambing Time

When it comes to lambing, proper planning and preparation is key.

For example, many people don’t time their lambing well and end up allowing their ewes to lamb on pasture – in the dead of winter. While sheep need only the most basic of shelters, the exception to that is during lambing. A wet winter’s day will kill a newborn lamb in a hurry. Plan your breeding times and mark them on the calendar so you know approximately when to expect lambs.

5. Not Building Any Shelter

As I mentioned earlier, sheep are pretty hardy creatures that don’t require a lot in the way of shelter.

However, that’s not to say that you should provide zero shelter at all.

On the contrary, you must build some sort of shelter to keep your sheep protected from the elements. In a hot climate, that might only mean giving your sheep somewhere to duck under during a heavy rainstorm and for some shade. In colder areas, you’ll have to factor in snow and freezing temperatures when building your shelter.

It doesn’t need to be fancy. Although we keep our sheep in a 30’ x 96’ hoop barn, for other people, raising sheep in a three-sided shack might work best.

Raising sheep is not for the lazy. These animals require a fair amount of maintenance and upkeep.

Shearing will be at the top of the list and don’t be fooled when you watch YouTube videos of professional shearers. They make it look easy, often beautifully shearing sheep in mere minutes (or less). However, for the untrained shepherd, shearing can take hours or days – or even weeks, if you have a large flock.

It’s not just shearing you’ll need to consider (sorry, hair breed owners – you aren’t off the hook). You’ll also need to deworm, trim hooves, vaccinate… the list goes on and on.

7. Not Moving Them Regularly

I mentioned earlier that one of the biggest issues faced by sheep is the threat of parasitism.

Parasites are common among many livestock animals but sheep are especially prone. It’s a good idea to keep on top of your sheep’s parasite loads by using tools like FAMACHA scoring. This will help you get an idea of when your sheep need to be dewormed and might be turning anemic due to heavy parasite loads.

However, one of the easiest and most efficient ways to prevent parasites is to move sheep often. After dealing with issues such as bottle jaw on our farm for several years in a row, we decided that the healthiest thing for us to do was to move our sheep to fresh pasture every single day.

It takes a bit of work to move our portable electric fences every night – however, it’s worth it to not have animals suffering or dying from parasite infestations.

You don’t need to be this intensive but ultimately, you should never allow your sheep to graze right back over their manure. The pasture shouldn’t be gnawed down to the dirt. Make sure your sheep are moved regularly and rotationally grazed. Not only can this help prevent parasites but it’s the best way to utilize a small pasture efficiently and to keep your grass healthy, too.

Sheep, like all other animals, require certain minerals to stay healthy. Some shepherds argue that if you are raising sheep on pasture, they should be able to pick up these minerals through the soil.

While that’s true to some extent, this argument overlooks the fact that everybody’s soil contains certain minerals in excess and is devoid of others. It’s hard to say which minerals your sheep are actually receiving.

Providing a mineral supplement is not expensive and will ensure your sheep are getting everything they need. It can help them grow to healthy weights and also prevent problems at lambing (such as the all too common white muscle disease).

Don’t Overlook the Many Benefits of Raising Sheep

The biggest mistake you can make while raising sheep?

Deciding they aren’t worth the hassle – and choosing not to raise them at all.

Raising sheep can indeed be challenging and, at times, a bit frustrating. I’ve certainly had my fair share of tear-my-hair-out moments!

However, I’m usually reminded pretty quickly of how much I enjoy raising sheep and the stress tends to be long forgotten.

If you’re thinking about raising sheep, whether it’s for meat, milk, or wool, don’t let the mistakes I’ve described above turn you off. Trust me, once you’ve raised sheep for a few years, you’ll be able to prevent and address these issues before they become problematic in the slightest.