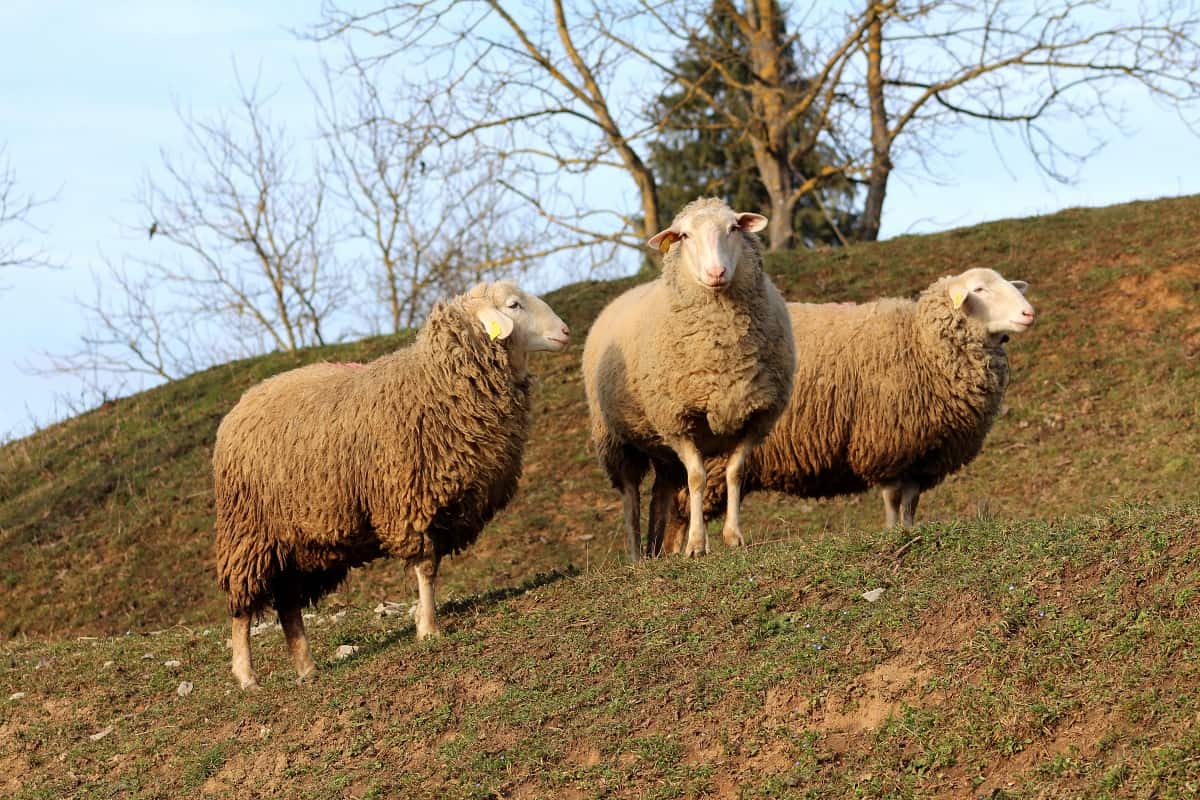 If you’re thinking about raising sheep, there are lots of factors you’ll need to consider.

Where will you house them? What will you feed them?

Most importantly, how long can you expect them to live?

Sheep life expectancy is influenced by a variety of factors, as you likely know to be the case with other types of animals as well. There are plenty of ways you can encourage your sheep to live long, healthy, and productive lives – but of course, there’s a lot that’s out of your control, too.

In this article, I’ll walk you through basic sheep life expectancy as well as tips to improve their longevity and overall health.

How Long Do Sheep Live?

Most sheep have a longevity that is similar to larger breeds of dogs – about 10-12 years. Of course, there is a lot of variability in here, too, especially among individual sheep and breeds.

The longest-lived sheep ever was a 23-year old Merino ewe!

It’s important to note that when farmers consider how long a sheep can be expected to live they aren’t just thinking about overall years of life. They are also thinking about productivity.

A ewe will usually be most productive when she is between 3-6 years of age. This will start to taper off, with older ewes being less fertile and producing lower-quality wool and milk than those who are younger.

Younger animals tend to be superior to older ones, which is why many farmers will get rid of older ewes to make room for young ones.

How to Determine a Sheep’s Age

There are several ways you can go about determining a sheep’s age, but the easiest way is to look at its teeth. This can be done for both ewes and rams.

When lambs are first born, they only have 8 milk teeth on the lower jaw. There are no teeth on the top jaw – just a pad.

You can take a look at these teeth to get an idea of how old a sheep is. As a sheep gets older, the teeth will wear down, spread out, and break down. Eventually, the sheep will lose all of her teeth and become what’s known as a gummer.

Believe it or not, a sheep with no teeth can still survive. Remember, it has its molars for chewing. That said, it won’t be as productive and its health may start to decline since it will have a more difficult time grazing short vegetation.

There are a few factors that affect the longevity of your sheep. Consider these as you’re estimating your sheep’s lifespan.

In harsh environments, it is not uncommon for ewes to live much shorter lives. Their teeth wear and break down faster than they might in more favorable environments. This can make it harder for them to maintain body condition and feed themselves and their young.

Many farmers will cull ewes when they’re younger in these environments. However, if a ewe is given premium forage and stays healthy, she can easily live and be productive past 10 years of age.

Sheep are susceptible to many types of diseases. Parasites tend to be some of the most problematic, even with a good deworming schedule. These can not only kill sheep outright but also make them less productive.

Other diseases to watch out for include:

A big factor in how long sheep live is why they are raised. Sheep who are raised for meat aren’t going to live as long as those raised for wool. They’re going to be raised until they’re ready for the table – usually around 6-7 months of age.

Wool sheep will live much longer than sheep of any other purpose, as you might expect.

Of course, predators are going to be a primary threat to sheep, too. Natural predators include foxes, bears, coyotes, lynxes, mountain lions, dogs, wild pigs, and bobcats (among others).

A wild pig attack can kill dozens of sheep at once. Even smaller predators, like eagles, will prey on lambs.

Therefore, much of a sheep’s longevity will have to do with how much protection it has from other animals.

How to Help Your Sheep Make it to Old Age

If you want your sheep to live as long as possible, follow these simple tips.

1. Give Them Exercise and a Healthy Diet

Obesity is a leading cause of many sheep diseases, including enterotoxemia.

Because of this, it’s important to keep your sheep as healthy as possible. Allowing your sheep access to pasture and other opportunities to exercise can help prevent diseases and reduce depression.

A healthy diet is also key. Remember, sheep don’t have to have grain – too much grain feeding has also been linked to a variety of diseases that can reduce the overall lifespan of your animals.

Get on a good schedule when it comes to vaccinating your animals. There’s only one universally recommended vaccination for sheep – the CDT vaccine – so you must administer this when your animals are young. Regular boosters are necessary, too.

Don’t overlook the power that basic veterinary care has in prolonging the life of your animals.

You don’t necessarily need to hire a vet for bi-monthly check-ups, either – that’s not what I mean. Instead, do things like hoof trimming, FAMACHA scoring for parasite loads, and other basic care to keep your sheep healthy and happy.

On that note, make sure you do everything in your power to reduce parasite loads on the farm. Parasites are the leading cause of death in sheep – and they can be tough to get under control.

The best way to reduce parasite loads is to rotate your sheep to fresh pastures often. However, you may need to implement a rigorous deworming schedule as well so that you can keep worm counts down.

Although there are plenty of steps you can take to improve the health of your flock and to encourage your sheep to live as long as possible, it’s important to be realistic in your expectations.

Even if your sheep lives to 12 or 13 years of age, it’s probably not going to be productive that entire time. Most sheep stop breeding a few years before they reach their natural life expectancy.

There’s nothing wrong with keeping your ewes and rams around after this time! However, they may have a harder time getting around and even eating once they get older, so it’s not always the most humane decision to do so.

Weigh your options carefully – and know that while sheep longevity can be influenced by various factors, by hook or by crook, each animal will eventually have its day.