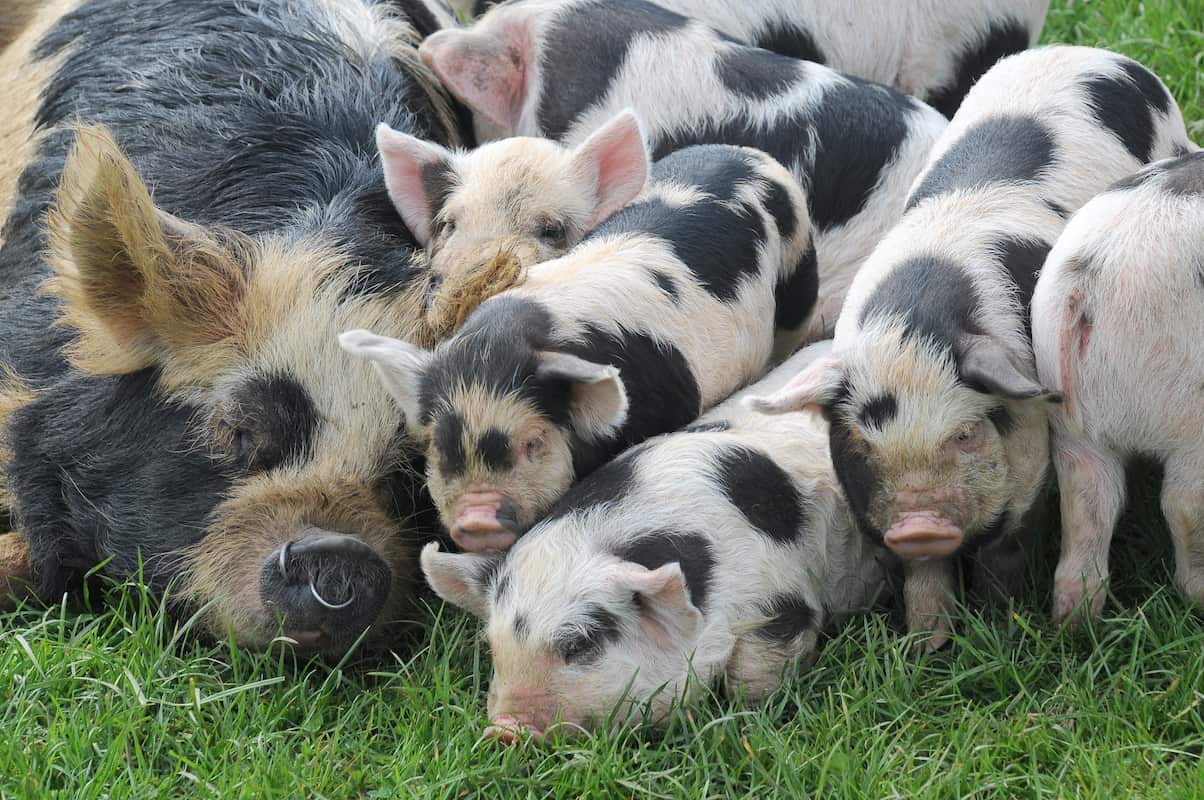 If you’re thinking about raising Kunekune pigs on your small farm, you’ve made a great decision. These heritage-breed pigs are great for small to moderate-sized farms and homesteads. They are native to New Zealand.

Kunekune pigs are friendly and colorful, weighing around 100 to 250lbs. There are plenty of other reasons to raise these intelligent hogs on your homestead. I’ll tell you everything you need to know in this article.

What Are Kunekune Pigs?

Kunekune pigs are smaller pigs native to New Zealand. Nobody knows for sure, but most people agree that they are probably cross of Poland China, Berkshire, and Gloucester Old Spots pigs (along with a few select breeds from Indonesia).

They can be found in all kinds of colors, including cream, ginger, black, gold-tip, tricolored, and brown. They’re often kept as pets and occasionally raised for meat, too.

If you’re raising pigs as pets, you won’t find a better pig breed than the Kunekune. It is not a massive breed, so its small size can be perfect for somebody who is new to raising pigs and doesn’t want a behemoth boar to deal with! They are friendly and easy to train, too, which works in tandem with their small size to make them some of the best pet pigs around.

Kunekune pigs are some of the friendliest, most mild-mannered pigs you can raise. Of course, this ultimately comes down to the personality of the individual pig. Some hogs are just naturally more ill-mannered than others, just as you might find with people.

However, Kunekune pigs are known for being pretty laid back. You won’t have to worry about them going after your toes when you step into the pen!

They are also known for being great with children. They don’t nip and harass as much as other breeds of pigs do.

I always advocate for raising pigs on pasture for a number of reasons. Not only does it help spread feces around so you aren’t left dealing with huge piles of pig manure to shovel, but it also improves soil fertility.

Plus, raising pigs on pasture is just better for the pigs’ health. They’ll have plenty of room to roam around and root, and they’ll be less likely to get into trouble as a result of their boredom!

That said, if you’re going to raise pigs in a smaller pen, Kunekunes are ideal. They are less likely to challenge fences than other more curious breeds, a major benefit if you don’t want your pigs to get out all the time.

Kunekune pigs have a unique anatomical feature that makes them less likely to root and destroy pasture, too. Their snouts are shorter and more upturned than those of other pigs. Therefore, although they will still root (this is a natural behavior for all pigs, regardless of breed) the results will likely be less disastrous!

Kunekune pigs are perfect for pasture-raising for another vital reason. They love eating grass!

Really, no pig will turn up its nose at some fresh greenery, but Kunekune pigs are exceptional in that they really love green grass. They can easily be raised on pasture without requiring you to input quite as much grain or commercial feed. That not only lends itself well to producing healthier meat but also means you can spend less money, too.

Do you like eating lard? If so, you may want to consider raising Kunekune pigs. They put on a lot of fat rather than muscle, so they’re some of the best lard pigs you can raise.

There are some people who will say that Kunekune pigs are odorless, but I’ve never found this to be true with any kind of pig. Really, an “odorless” pig is one whose manure has just been properly planned for by the farmer.

I think Kunekunes are often believed to be odorless because they are frequently raised on pasture. This means the manure is spread out over a larger area. They aren’t as likely to be raised in barns.

Because Kunekunes take well to being raised on pasture, you can spend less money to get the same amount of pork. You won’t have to put as much money into feeding them or the time into hauling away manure, either.

How to Raise Kunekune Pigs

If you can, raise your Kunekune pigs on pasture. This will not only reduce the amount of space you need in your shelter but will also improve your soil health and spread the manure around a bit, too. For all the reasons I mentioned earlier in this article, Kunekunes do very well when raised on pasture.

When space permits – I realize this might not be possible on smaller farms – you should also rotate your pastures. Move your pigs as often as your time and space limitations allow. This will give the pasture or forested area time to “bounce back” before the pigs return to it. Although Kunekunes don’t root as actively as other pig breeds, they do still inflict some damage on the vegetation in a given area.

In most cases, you will still need to supplement a bit with a traditional feed. You can feed once in the morning and once at night or you can set up an automatic feeder. How much you’ll need to feed will depend on the size and age of your pig along with the quality of the available pasture.

As with any other pigs, Kunekunes love being fed snacks like fruit vegetable scraps, dairy, brewery waste, and lawn waste, too. The occasional bread or pastry treat is totally fine, too. Just avoid meat.

In the winter, when your Kunekunes aren’t on pasture, the best way to feed them is with alfalfa hay. Kunekunes are unique in that they will eat hay. Many pigs will not. Again, you’ll likely need to supplement with grain.

When it comes to housing for your Kunekune pigs, you don’t need much besides some rudimentary shelter to keep them out of the rain. You can make a simple overhang that will give them a place to huddle up, or you can build a three-sided barn. A three-sided barn is perfect for almost all weather conditions except intense cold and driving snow.

If you plan on keeping Kunekunes through the winter, you’ll need an actual barn (although it’s important to note that they are much more cold-tolerant than many other breeds of pigs). Kunekunes, like other pigs, don’t need supplemental heat unless you have piglets being born in cold weather. Just provide plenty of bedding.

They’ll usually do all of their “business” in one corner of the shelter, which makes it a lot easier when it comes to clean-ups in the spring.

Kunekunes have minimal health needs and care requirements, except for those that you would do for all other pig breeds, too.

For example, you may need to deworm your pigs to make sure they aren’t picking up parasites from the soil. You will also need to pay special attention to your sows and boars during the breeding season, too. When it comes to farrowing and breeding, Kunekunes follow the same schedules and exhibit the same behaviors as other pigs.

There are really only two things to be aware of that differ when it comes to raising Kunekune pigs versus pigs of other breeds.

The first is that Kunekune boars grow massive tusks. Although these pigs are not aggressive and will rarely use their tusks against other pigs, you may want to file them down. This can prevent accidents from occurring. This can easily be done at home, supposedly, although I have not done this myself.

You also want to be aware of the dangers of overfeeding your Kunekune pig. This is something that is a risk for all pig owners (not just owners of Kunekunes) but the risk is more pronounced with Kunekunes. This is because they have a tendency to become overfat.

There are several challenges associated with raising Kunekune pigs. Although these certainly aren’t dealbreakers, you should be aware of them before you decide to invest in your own herd.

For starters, Kunekune pigs are some of the smallest pigs you will find. Although a 100lbs pig sounds like a lot, when it comes to meat production, they are from the largest animals you will find.

Not only that, but Kunekunes grow slowly, too. If you plan on raising Kunekunes for meat, you won’t get a lot of it. It also takes them longer to mature than other pigs (often nine months to a year, compared to the typical five or six months required by pigs of other breeds).

When fully grown, it’s important to note that Kunekunes produce a lot of fat. So while Kunekunes are great for lard production, they aren’t the best when it comes to the production of muscle meats (like pork chops).

That being said, there are some chefs who absolutely love working with Kunekune meat, as it tends to be richer-tasting and darker in color. The choice is yours. However, keep in mind that many homesteaders choose to keep these pigs as pets instead of choosing to raise them for meat.

Are Kunekunes Right For Your Farm?

Consider your homestead goals before you jump into raising Kunekunes. Although these pigs are absolutely adorable and quite friendly to work with, there are some disadvantages to raising them, too. If you plan on raising pigs solely for meat and want to do so in the most efficient way possible, this breed might not be for you.

Otherwise, this hairy, laid back pig is sure to be one that steals your heart!