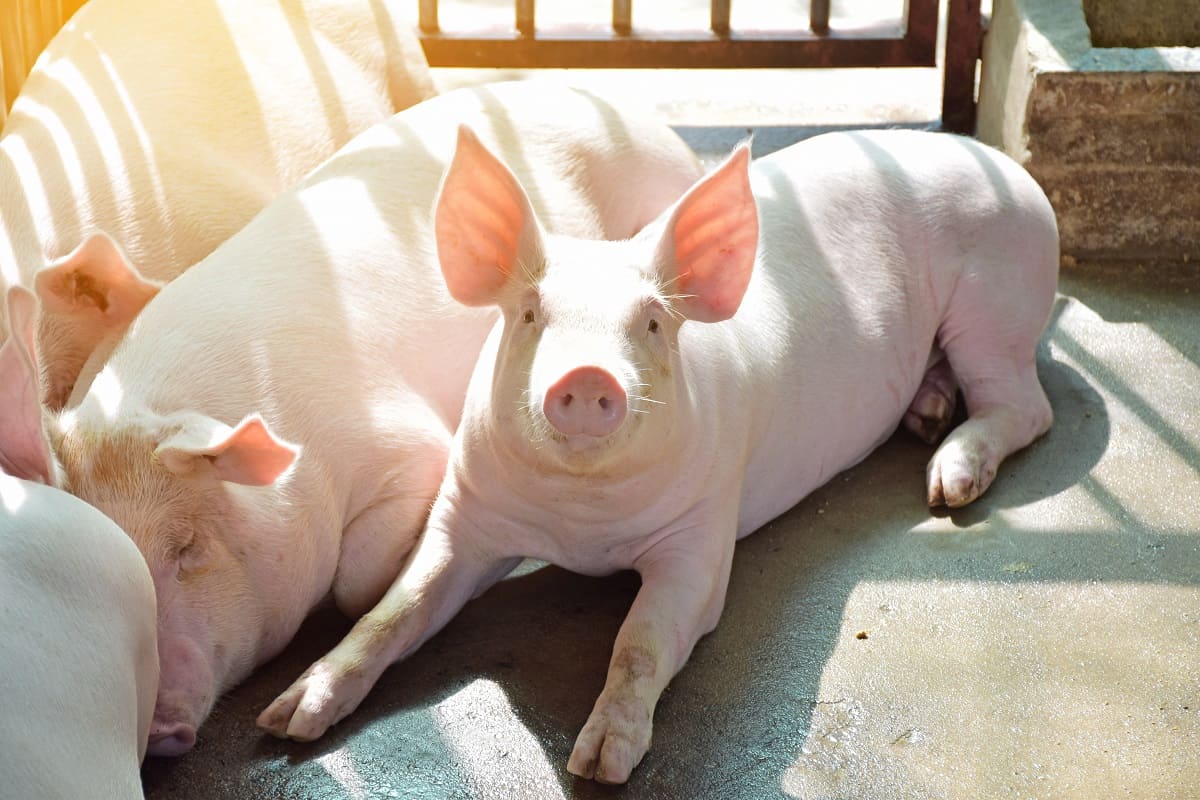 If you’re looking for pig breeds to raise, it’s pretty likely that the Large White has come up in your search.

The Large White pig is a breed of domestic pig that was originally bred in East Anglia, England. The Large White was developed primarily as a bacon-type hog, and the primary use for these pigs today is still for meat (especially bacon!) production.

What is the Large White Pig Breed?

A British breed of pig, the Large White is from the county of Yorkshire in northern England. It is closely related to the American Yorkshire pig, a breed that’s much more common in North America.

A large, meaty pig, it is a mostly white to pink color with erect ears and a dished-looking face. These ears and the unique facial structure are the most easily identified features of these pigs.

Large Whites are known for being long-bodied, with delicate white hair, an extremely large body size, and superb hams.

It is one of the most populous of all pig breeds, often used in crossbreeding with commercial pig farms. Though originally developed as an outdoor breed, it is now used by commercial breeders who raise hogs indoors, too.

The Large White pig was first recognized in 1868, owing its origins to the Yorkshire breed. It is one of the first founding breeds of the National Pig Breeders’ Association in the United Kingdom, a group that is now regarded as the British Pig Association.

It is somewhat unclear how the breed was developed. In all likelihood, the coarser, leggier white Yorkshire pigs of the region were crossed with other breeds such as the Cumberland, Middle and Small White, and Leicestershire breeds.

Later, these initial crossbreeds were improved upon for a larger size and more suitable bacon-producing abilities.

Today, Large Whites are used in many crossbreeding programs – in fact, Large Whites genetics, besides those from Yorkshire, can be found in virtually all commercial operations.

Here are some of the best reasons to consider raising Large Whites.

Large White pigs were developed to be raised outdoors in classic barnyard settings. They can handle all kinds of climatic conditions, including sudden fluctuations in temperature. Because of this, it’s a good breed to consider raising on pasture or in a fully outdoor setting.

That said, Large Whites also adapt easily to confinement. This is one major reason why these pigs are often raised on commercial hog farming operations.

These pigs have long legs and are a bit taller than other pig breeds. Because of this, they are more active and do quite well when given room to roam.

The Large White pig is an excellent pig to raise for meat. Mature boars typically weigh around 750-850lbs while females are around 600-700lbs. Of course, you’ll likely slaughter your pigs before then – but the ability to grow to such a large size is valuable nonetheless.

Large Whites are prolific breeders and utilize feed efficiently. The carcass quality of these long, level, and wide-backed pigs is superior to many other kinds of breeds as well. Since they are so long, they are known for their bacon production. They don’t put on excess fat and grow quickly.

Sows of the Large White breed are known for their excellent reputation. They are wonderful dams and mothers, and their genetics were used in the creation of the classic FI hybrid gilt.

Large White pigs are known for having good maternal instincts and large litters. They are also excellent milk producers for their piglets.

If you’re planning on raising pigs but have another breed in mind, you may want to consider crossbreeding your hogs with Large Whites. They cross easily with other breeds, and their characteristics are second to none.

If you’re interested in keeping pigs as pets, you shouldn’t have a hard time raising Large Whites. They are friendly and fond of human interaction. They are also social animals who enjoy being with other pigs and livestock.

Here are a few things to keep in mind when raising Large White Pigs.

When raising Large White pigs, be aware that these pigs are much fairer-skinned and lighter-haired than other kinds of pigs. While this is not usually too much of a problem, it can lead to your pigs becoming sunburned in intense sun or heat.

Remember, pigs don’t sweat. Therefore, you must provide your Large Whites with plenty of room to cool off in a mud wallow. Shade, particularly during the hottest and sunniest days of summer, is also important.

Large Whites are known for being non-finicky eaters. They’ll eat anything they can get their mouths on! For many farmers, this is a significant advantage.

However, the downside of this “stomach of steel” is that Large Whites will often get themselves into trouble by eating harmful foods. They’ll eat all kinds of scrap food, spoiled food, decaying carcasses, etc – so be careful what’s left lying around the pigpen.

Letting your Large White pigs eat anything and everything is a good way to invite diseases and parasites, so be mindful of their diet. Just because they can eat it, doesn’t mean that they should.

Large Whites are intelligent pigs, experiencing a wide array of emotions. Of course, they also have their bad sides – they can be stubborn and downright destructive at times.

Often, destructive or obstinate behavior is a sign that your pigs are depressed or stressed. Make sure your pigs have companions and plenty of room to roam to avoid unwanted behaviors.

How to Raise Large White Pigs

Large White pigs can be raised in more or less the same fashion that you would raise any other kind of meat hog on your farm.

These pigs require more space than other breeds, primarily because they grow so large. Although they are more adapted to confined spaces, they’ll do best when given room to stretch their legs.

You’ll have to make sure your fencing is up to snuff, too, since Large Whites are prone to becoming escape artists if they aren’t properly fed and entertained.

Otherwise, raising Large Whites, whether as pets or for meat, is simple. You can follow the same tips you might read about in other articles of ours regarding how to feed and house your pigs of other breeds.

Are Large White Pigs Right For Me?

When you’re trying to figure out if a Large White pig is right for you, there are plenty of things to consider.

However, one thing that will help make the decision easier is understanding what these pigs are all about.

Large White pigs can be highly intelligent and social animals with an IQ similar to that of dogs or cats! Beyond their intelligence, they also have playful personalities and love nothing more than spending time outside in the sun playing with their other piggy friends.

Also, Large Whites grow up to become large, excellent meat producers (who are also good mothers). While there are drawbacks to raising these pigs, as there are with any other pig breeds, you may have to consider the advantages listed above when the time comes to decide on the next new addition to your farm.