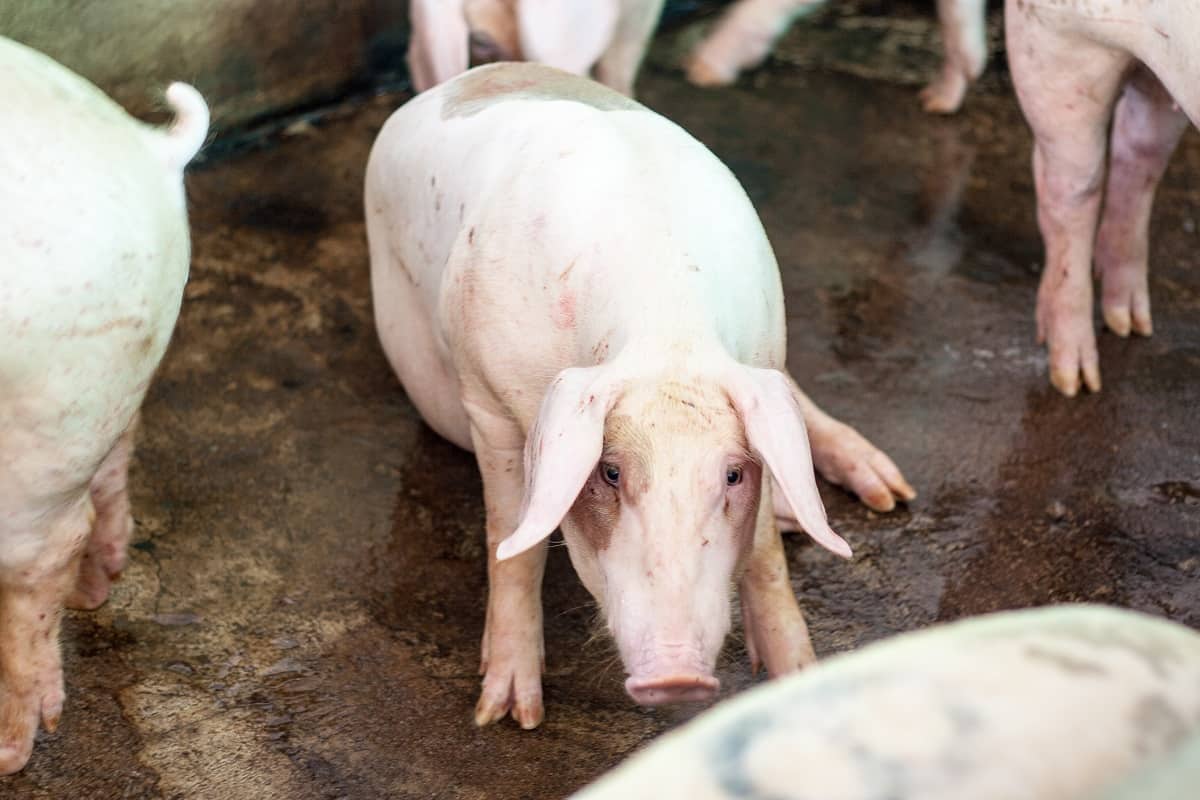 A few weeks ago, we walked out to the pig barn to discover that one of our sows (who had recently weaned her 13 piglets) was suddenly limping and unable to stand.

Upon further investigation, we discovered that she had twisted her ankle and had some significant swelling. The swelling and pain were causing her to be lame.

Lameness isn’t always caused by an obvious injury and when it’s not, it can be tough to treat it. In many cases, lameness can kill a pig – so it’s important to know several of the most common causes of lameness in pigs so that you can take steps to treat the issue promptly.

As with any kind of farm animal, lameness is an issue in pig production that can cause serious losses and stress. While it can be caused by developmental abnormalities or congenital problems, more often than not, lameness in pigs results from pain from infections, injuries, or underlying diseases.

Lameness is complicated because although it can simply be defined as the failure of a pig to walk normally, it can occur at varying degrees of severity. It can also cause other symptoms, such as weight loss, sores, tucking of the feet, an arched back, and more.

Unfortunately, second only to reproductive failure, lameness is the most common cause of sows having to be culled. It is not age- or breed-specific, with pigs of all ages and breeds at risk of becoming lame.

In addition to a failure to walk normally, lameness might present with symptoms such as

10 Causes of Lameness in Pigs – and How to Treat

Treating lameness in pigs starts with identifying what may have caused it in the first place. It is very difficult to treat a pig that has become lame and doing so often relies on identifying the root cause and treating both it and any related symptoms.

While arthritis is common in humans as we get older, it can happen in pigs of any age. It is most common in sows and sucking or growing pigs.

Also known as mycoplasma arthritis, it typically presents as lameness, stiffness, swollen joints, and perhaps lesions on the skin. In many cases, lameness and joint swelling are the only signs.

It’s typically a bacterial infection that can be spread as the result of trauma or by contact with another sow.

It is generally treated with an antibiotic like lincomycin or penicillin. Keeping pigs on solid bedding that is not concrete can help prevent the disease.

As with any other animal, injury can be caused by just about anything.

Often, injury is more likely if pigs are overweight as well as those that are “tight” in structure, meaning their joints are positioned so that they cannot take long, easy strides.

Poor flooring can increase the likelihood of a slip and fall. Cement and concrete are sturdy and easy to clean but can be hard on the legs of a pig. At the same time, a wood floor, though softer, can be slippery when wet. Therefore, it’s a good idea to add a soft cushion of bedding to prevent falls.

Other causes of injury include fighting at the feeder, exercise extremes, and accidents. Often these cannot be prevented but checking your pigs regularly for any injuries is essential to being able to treat them promptly. You may need to administer pain medications or call in a vet – sometimes, pigs that are severely injured cannot be saved.

Dippity pig is one of those pig diseases that sounds funny but in reality, can be quite damaging to a herd of pigs.

It’s often used interchangeably with the name “erythema multiforme” as well as “bleeding back.” Thought to be a neurological disorder, stress or sunburn can exacerbate it.

Affected pigs are sensitive to the touch and have a hunkered-down dance. They often dip down when touched, too, and appear to be in great distress. It has a sudden onset but disappears just as quickly, typically within 48-72 hours.

The good news is that it is relatively easy to treat. You can give your pig aspirin to help address the pain. However, it’s important to check in with a vet if you suspect this disease, as it could be another issue instead of dippity pig.

Most pigs naturally carry multiple serotypes of streptococcal bacteria and will never show any signs of infection.

However, infections are most common in weaned pigs about 2-5 weeks after weaning. Certain conditions make these kinds of infections more common, such as overcrowding, temperature fluctuations, and intermingling younger pigs with older ones.

This disease can be hard to root out since it often co-occurs with other diseases, including swine influenza. Other symptoms, besides lameness, include fever, depression, and a lack of appetite. In severe cases, a pig can die without you even realizing what is going on.

Meningitis, however, is the most striking feature of this disease. This is usually the symptom that leads most vets to determine that a streptococcal infection is the problem instead of something else. A pig with meningitis might hold its ears back, squint its eyes, and appear uncoordinated. It may also suffer from convulsions or lesions.

If you suspect this kind of infection is contributing to your pig’s lameness, get hold of a vet right away. To treat this disease, you will need a lab test to identify and will need to be treated with an appropriate antibiotic.

I won’t go into too much detail about porcine stress syndrome since we have already covered it in detail.

However, it’s important to recognize that this disease can cause lameness along with other symptoms such as blotchy or reddened skin, back muscle necrosis, a fever, facial twitching, and more.

It’s a peculiar disease that unfortunately can cause death in as little as 15-20 minutes, so knowing how to prevent PSS is more important than knowing how to treat it, in many cases.

Another bacteria disease to be on the lookout for is erysipelas. A bacterial disease, it is impossible to eliminate from a herd because it can be found just about everywhere, naturally occurring in the environment.

It’s most common in sows, gilts, and growing pigs, causing a high temperature, infertility, lameness, and more. It can be fatal.

This disease is caused by wet, dirty pens, wet feeding systems, and poor conditions in terms of hygiene and ventilation. There are vaccines available for this disease but affected animals can be treated with penicillin.

Clostridial diseases can also cause lameness but you’ll almost always notice other symptoms first, such as diarrhea and unfortunately, death.

It normally affects piglets in the first few days of life, caused by the ingestion of bacterial cells in material that has come into contact with infected feces. It’s usually transmitted among groups of pigs so proper hygiene can help prevent it.

Some vaccines can be given to a pregnant sow to prevent this disease. Improved hygiene can stop an infection from spreading but antibiotics are often necessary.

Brucellosis can affect pigs of all ages, with sows most dangerously affected because it can cause abortions and infertility. It can also cause lameness, of course, along with many other symptoms.

There are lab tests that can be used to identify brucellosis. Since this is a disease that readily transmits to humans, too, it’s important to contact a vet if you suspect this disease. Unfortunately, affected pigs often have to be slaughtered. The good news is that this disease is relatively uncommon.

Foot rot is, fortunately, easy to prevent in pigs.

This issue arises when the area around the claw becomes swollen and painful, typically after cracks or splits have appeared in the hoof. Usually, it is found in one foot only and is more common in the hind feet.

It can be worsened by poor flooring surfaces or by vitamin deficiencies, so paying attention to these two factors is essential. Antibiotics can be used to treat rotten tissue.

Glasser’s disease is another cause of lameness that can be difficult to identify since it presents many of the same symptoms as other diseases.

It targets the smooth surfaces of the joints along with the lungs, heart, and brain. This disease can cause symptoms like fever, pain, and a lack of appetite, along with respiratory problems. It is best treated with antibiotics. To protect young pigs, consider using antibiotics at farrowing time.

Some pig issues lead to lameness that really can’t be prevented, even with the best attention to animal welfare. You can’t always stop a pig from tripping and injuring herself and some bacterial diseases are ubiquitous, transmitted by bacteria that are found virtually everywhere.

However, keeping a hygienic environment for your pigs can help prevent most issues. Make sure stalls are mucked out regularly and include lots of soft bedding (avoid super hard floors).

Consider vaccinating your sows for various lameness-inducing diseases before farrowing and keep the name and number of a good vet on hand, as it can be difficult to figure out what exactly is going on.

Ultimately, preventing and treating lameness in pigs is far more difficult than it looks! However, the more attentive and vigilant you are, the quicker you will be able to jump into action should the (unfortunate) need arise.