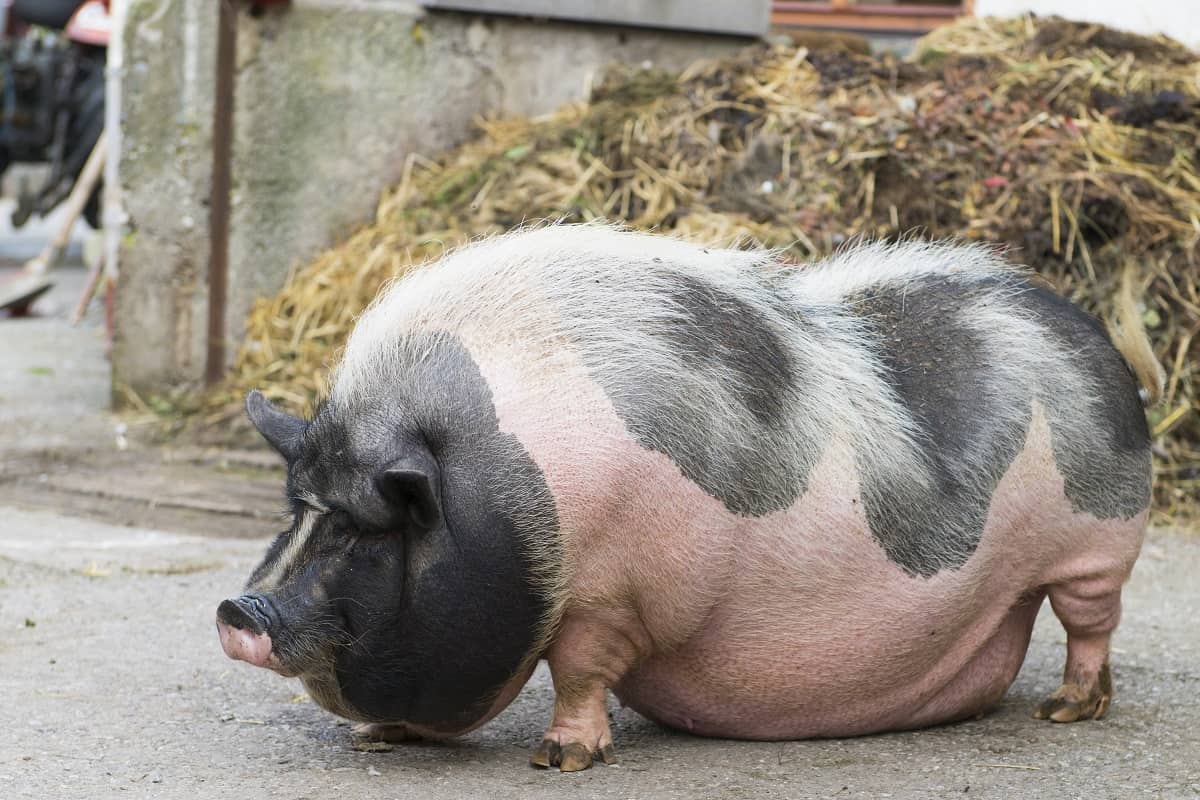 If you have pigs, then it’s important to know the difference between fat and healthy. Many people assume that the heavier their pigs are, the better. More meat, right?

That’s not the case. In fact, a pig that’s too fat is a pig that is unhealthy and won’t produce quality meat. While there will admittedly be more meat, the resulting meat will be fattier and more tasteless.

The problem with growing pigs to a healthy weight is this – pigs are very smart animals who love to eat. As they grow larger, their nutritional needs change.

Because of this, you’ll need to keep close tabs on your pig’s weight to make sure that he or she is getting enough exercise, food, and water.

Here are some tips to help you identify whether your pig is too fat – and if so, what you can do about it.

Is My Pig Fat?

I’m not trying to body shame here – but there is such a thing as a pig that is too fat. Just as with any other animal, pigs that are carrying too much weight are prone to a variety of health problems.

How do you know if your pig is too fat?

One of the easiest ways is just by looking at her. If your pig has a belly that drags on the ground or the tail is sunken deep into the rear, there’s a good chance that your pig is obese.

On the flip side, you don’t want your pig to be too thin. If your pig is too thin, it will have bones that can easily be felt with a bit of pressure, or prominent bones can be seen without pressing on them.

Most pigs don’t finish growing until they are about 3-5 years old, so obesity isn’t usually an issue unless you’re raising breeding animals. However, a pig can have more fat than what is ideal for the market if you’re raising grower pigs, too.

The ideal size for a pig will vary by breed but in general, a healthy, mature boar will weigh no more than 700lbs while a sow will weigh slightly less. Grower pigs should be butchered around 250-300lbs live weight (usually, this is when they are around 6 or 7 months of age).

Obesity isn’t healthy for any animal – including pigs. The problem with pigs, particularly when compared to other animals, is that they tend to gain weight quickly but lose it slowly. Maintenance can be hard!

Among the obvious issues, such as lethargy and an increased proclivity toward injury from carrying all that excess weight, pigs that are too fat can also be more prone to depression and anxiety.

A pig that has become overweight will be less likely to play, explore, and root around in the mud. This can make it harder to get the weight off in the future.

Not only that, but obesity can cause something called fat blindness. Also known as entropion, this disease causes the eyelashes to turn inward and scrape against the eye.

It can also be genetic but often, it develops in pigs who have become overweight due to the downward pressure on the eye from the extra fat.

Overweight pigs can also be more prone to reproductive failure. The heavier a pig is, the less likely he or she will produce healthy litters of piglets.

The issues mentioned above are, of course, more common in mature pigs. However, numerous issues can arise when growing pigs become too fat, too. One of the biggest is that, at butchering time, the meat will not be of optimal quality.

Lots of people assume that a fat pig is a tasty pig, but that’s not the case. In fact, the fatter a pig is, the higher the likelihood that you’re going to waste money. When pigs get too fat, it results in a carcass that needs to have a lot of fat trimmed off the meat. Most of the time, that fat goes into the trash (although you can, of course, make lard from some of it, though not all).

How to Help an Overweight Pig Lose Weight

If you’ve realized that your pig is obese, it’s time to break out some strategies to help your piggy lose weight. Here are some of the best tips.

1. Figure Out the Baseline

Before you start your pig on a rigorous diet, make sure you know the baseline. Don’t assume that your pig is overweight and needs to lose x amount of pounds – weigh your pig and figure it out for sure. That way, you’ll know what numbers to work with.

If you can’t get your pig on a scale – a likelihood – you can estimate his or her weight with a tape measure. Measure the dimensions of heart girth and length. Square the heart girth, then multiply it by length and divide by 400. This will give you the approximate weight of your pig in pounds.

One of the biggest challenges in helping an overfat pig lose some weight is knowing exactly what and how much you should be feeding her.

It’s often recommended that grower pigs be provided with an automatic feeder so that they can help themselves to feed whenever they get hungry.

However, I don’t recommend doing this with mature breeding animals. They’ll eat constantly until they are grossly overweight.

Instead, provide a daily ratio. It’s hard to give an exact number on how much you should be feeding your animal since this will vary depending on the age, gender, and reproductive status of the pig. Pregnant or lactating sows need much more fuel than a sow that is dry.

Half a cup of food for every 25lbs of a pig is the general recommendation, but that doesn’t mean that’s right for everyone. Even things like activity level and illness can play a role in how much you should be feeding your pig.

Another option for feeding pigs is to feed 1-2% of total body weight. This is okay for pigs who are already at the ideal weight but be careful using this calculation for obese pigs as it will likely end up being too much.

Pigs aren’t like humans, who can lose weight by exercising intensely. Instead, they lose weight by balancing calories in with calories out. Older pigs won’t be as active as they were when they were young – and their metabolisms are going to be slower, too, especially when you consider that many overweight pigs already have mobility issues.

Therefore, you’ll have to address nutrition first, and then add in a bit of exercise.

By exercise, I mean moderate exercise. The goal here is not to have your pig doing laps around the pen wearing a weighted vest.

Instead, start small. Move food and water dishes to different parts of the pen to encourage your pig to move. That’s all you need to do.

You might also consider feeding your pig inside a treat feeder that requires a bit of movement.

This tip should be implemented with caution. You need to be careful about adding too many pigs, as this can backfire and lead to aggression and fighting.

However, you may be able to increase competition by adding pigs. A bit of competition is good for a pig who needs to lose weight.

It will encourage him or her to move more and may help alleviate some of those symptoms of depression that come with obesity, too.

When it comes to the pig diet, the quality of feed often matters much more than quantity. Avoid foods that are calorie dense but nutrient-poor, like donuts, bread, and sweets.

Instead, feed lots of fresh, leafy greens and other nutritious foods. This will help your pig get the nutrients and energy it needs without packing on the pounds.

Raising healthy pigs isn’t as complicated as it seems.

You don’t need to have your pig on Weight Watchers to keep it at a healthy weight. Most of the time, nature will take care of everything for you. Just make sure you provide your pigs with plenty of nutritious food and water. Also, provide plenty of places to roam around and exercise during the day.

Skip fatty treats like breads and sweets and stick to a formulated feed and fresh fruits and vegetables instead.

By providing mostly healthy foods to your pigs, they’ll be able to eat to their hearts’ content – without packing on the pounds.