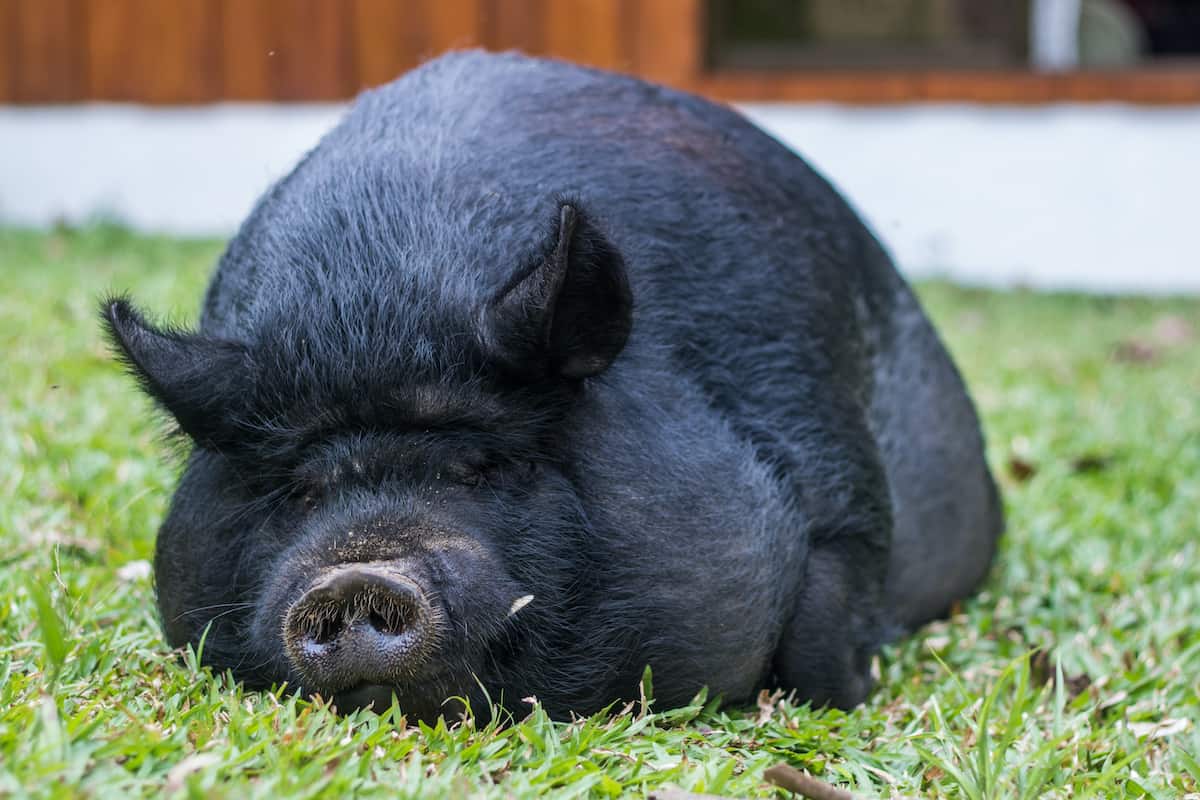 If you’re thinking about raising pigs on your small farm, you may have to put some thought into what breed would be best for you.

That’s smart to do. Not considering the benefits and disadvantages of various pig breeds is a surefire way to set yourself up for failure.

American Guinea Hogs have quickly risen to popularity in the last few years. They admittedly might not be for everyone. However, there are lots of good reasons to consider adding these pigs to your farm.

Here’s a brief overview – as well as some of the key benefits and challenges to raising this pig breed. I’ll give you some tips on how to do it, too!

What Are American Guinea Hogs?

Although it seems like American Guinea Hogs have only recently come on the scene, the reality is that these pigs have been around for practically forever.

In fact, this was the hog breed of choice in the southeastern parts of the US during the majority of the 19th century.

Also known as the Pineywoods Guinea, the acorn eater, the yard pig, and the Guinea forest hog, the American Guinea Hog actually has nothing to do with the country of Guinea (despite its moniker). Its original parentage may link back to West Africa, but it’s more likely that it originated from European breeding stock.

So where does “guinea” come from in the name? Most experts believe it is just a reference to the smaller stature of the pig.

There are two primary types of American Guinea Hogs found here. One is smaller-boned and one is larger-boned, with the larger-boned variety having longer legs.

Sadly, about a decade ago, the American Guinea Hog was believed to be almost extinct.

Other pig breeds – like the Yorkshire – overtook the American Guinea Hog in popularity. This happened as fewer people were raising pigs themselves and relying on the grocery store for their meat instead. With fewer homesteaders raising pigs, there were fewer heritage breed pigs in existence.

In fact, as of 10 or so years ago, it’s believed that there were fewer than 150 breeding animals in existence. How sad is that?

Fortunately, the American Guinea Hog has had a bit of a resurgence of late. More people are turning to it to supply their homesteads with meat – and affection, of course! Just as many (if not more) people raise these pigs as pets as well as livestock.

They are calm and docile, making them good animals for when working in close confinement is necessary.

They do well with other animals, too. That’s just one reason why many people choose to raise them as pets. You can also use these animals as part of a rotational grazing system that incorporates multiple species of livestock. You don’t usually have to worry about them going after other animals, like chickens.

Because American Guinea Hogs are so docile, they are also easy to work with when it comes to farrowing. They have great natural mothering capabilities and will more or less farrow without assistance.

All heritage pig breeds, for the most part, perform well on pasture.

They like being given the opportunity to root and dig for their food, nibbling on grass and bugs, rather than being locked up in a barn all day. The American Guinea Hog is no exception – but it takes things to the next level.

In fact, this pig is one of the best when it comes to eating grass.

It can be difficult to raise some kinds of pigs on pasture. They will ignore perfectly good grass in favor of tilling up what’s beneath it. However, that’s not the case with American Guinea Hogs. They’ll gobble up grass all day, which can help reduce your feed expenses. They are also known for their ability to feed themselves easily on poor-quality forage, too.

American Guinea Hogs are excellent grazers and will inflict minimal damage to your farm.

Other pig breeds will happily tear up a plot of land as they go about their daily business. However, American Guinea Hogs are more modest in their grazing behaviors. They root minimally as long as they have good pasture and plenty of food.

The American Guinea Hog is known as one of the best lard species of pigs. Again, this is one reason why the breed started to go out of style. As soon as Crisco was invented, many Americans began to move away from the idea of lard as a cooking fat.

Today, lard is still viewed as an “evil” fat. That’s despite the fact that there are plenty of health benefits associated with eating it, even compared to vegetable oils!

However, if you truly want to live a life of self-sufficiency, you need to be able to produce your own cooking fats.

Raising pigs for lard is a great way to do so. These pigs are prized for their ability to produce clean, bountiful amounts of lard. You can use it for both cooking and baking.

That’s not to say that the meat itself is less than ideal, though. Their meat is prized by gourmet chefs. It has a unique marbled fat quality that makes it excellent for serving. It is often compared to Kobe beef for its excellent flavor and rarity.

They are ready for market at around 6 months of age, producing a marbled carcass weighing around 75 pounds hanging weight.

Many breeders report that there is no need to castrate the young males. The testosterone does not taint the flavor in this breed.

One of the reasons that American Guinea Hogs fell out of popularity in the first place was because they are quite small.

In fact, although many hog breeds can easily tip the scales at 800-1000 pounds, American Guinea Hogs are usually much smaller. They usually weigh only 250-300 pounds at their heaviest.

As you might expect, this is not a pig breed that fits well into the factory farm setting. However, its small size does make it ideal for small farms where space is at a premium.

One of the biggest challenges of raising American Guinea Hogs is that they are incredibly easy to overfeed. As lard pigs, Guinea Hogs put on fat quickly. If you are in the habit of giving your pigs grain, you may find that this is a habit that needs to stop with this unique pig breed.

Other pig breeds thrive on grain, but when American Guinea Hogs are given too much, they will put on weight too rapidly.

This can lead to a pig that, when slaughtered, is almost entirely fat with poor meat composition. It can also lead to health problems. Fertility issues are common in overfat American Guinea Hogs.

American Guinea Hogs do best when they are raised on lush pasture. If you can, provide your pigs with access to clover. You can also give them all the kitchen scraps, quality hay, and other vitamin and mineral-rich foods they can eat. You will also have to supply them with lots of clean, fresh water, and a muddy wallow.

They don’t need much in the way of shelter, as their dense coat works well to protect them from the elements.

In winter, try to give them some sort of shelter from wind and precipitation (along with lots of clean, dry bedding). They will be all happier and healthier!

Grain isn’t necessary – at least, not in large amounts. Provide a very small amount of grain, as these pigs will do best when they can exercise for their food. As long as they are given good grazing opportunities, you shouldn’t have to do much else.

Of course, the major benefit of raising these hogs is that they are so small, they are easy to manage.

You don’t have to put a lot of effort into building a shelter that can withstand a small hurricane. These pigs aren’t going to put as much effort into trying to destroy it as other breeds of pigs!

There are certainly challenges associated with raising this breed of pig. However, it is nonetheless a great option for most backyard farms.