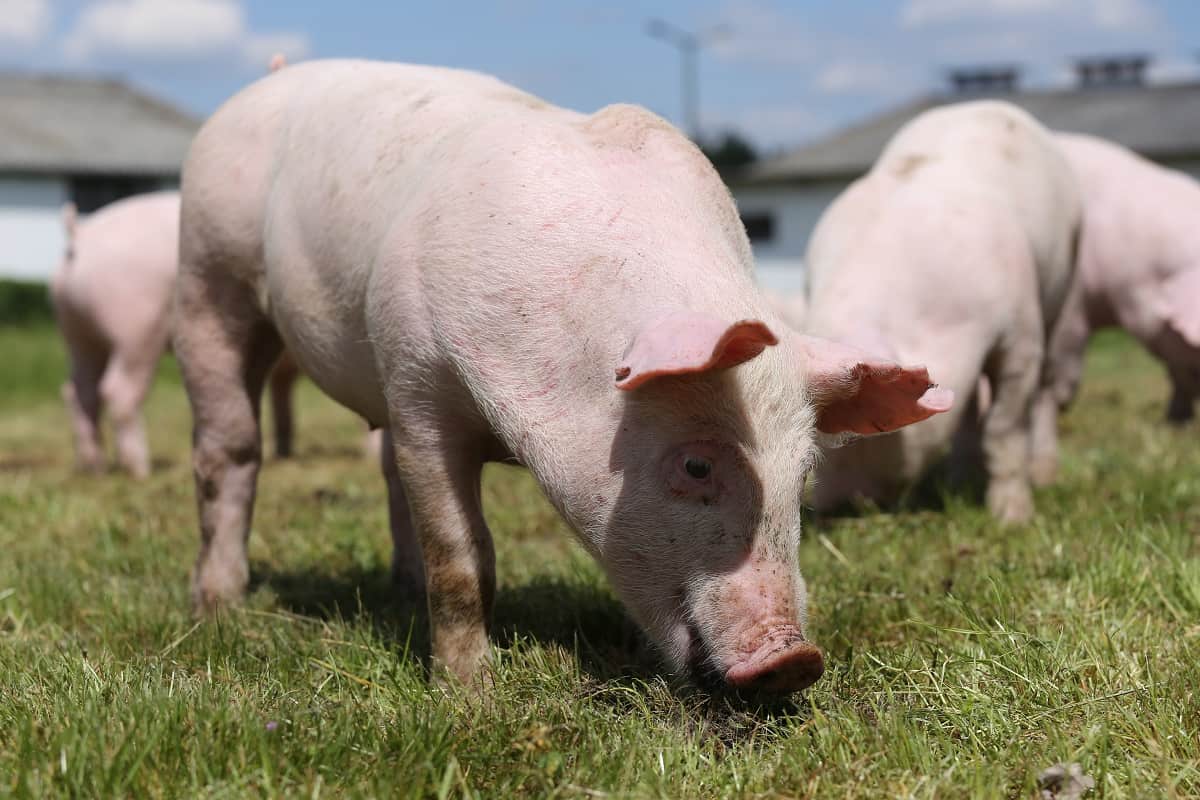 The importance of amino acids for pigs, and how to correctly supplement this in their feed.

If you raise pigs, you probably already know the basics.

You know what to feed them, how to house them, and perhaps most importantly (if you’ve learned this lesson the hard way!) how to build a fence to properly contain them.

However, you might not yet know about amino acids – and why they are so important for pigs.

Plenty of research has been published within the last decade or so about amino acids and why they are so essential for pigs. Lysine is one of the most important – but it’s not the only one they need.

Here’s what you need to know about why pigs need amino acids to grow properly and how you can supply them with everything they need to stay healthy.

What Are the Essential Amino Acids for Pigs?

The essential amino acids for pigs are:

…and most importantly, lysine.

Many of these names may sound familiar to you because they are amino acids that are also required by humans. In fact, pigs are quite similar to humans in their amino acid needs.

Besides the essential amino acids listed above, other amino acids are considered nonessential or semi-essential. These include:

Why Do Pigs Need Amino Acids?

Before we go into too much detail about why pigs need amino acids, it’s important to first clear up any confusion about what amino acids actually are.

Amino acids are the building blocks of protein. A common misconception is that pigs need a certain percentage of protein to grow, but in reality, it’s the amino acids that they need. If any one of the essential acids is not provided well enough, the growth of the pig will suffer.

Essentially, all living things need amino acids to some extent. These structural units of protein (along with peptides) are absorbed in the body during the digestion process and used to build new proteins, like muscle, which in itself is composed of different amino acids.

This is where lots of people get pig nutrition wrong. They think pigs need crude protein but in reality, it’s amino acids that they need. A pig diet must include a certain amount of amino acids to help it grow, reproduce, and lactate.

Lysine, tryptophan, and threonine are the three most important amino acids for pigs, often referred to as the “limiting amino acids” for pigs.

If a pig doesn’t get enough of the essential amino acids it needs, it can cause issues like reduced gains, bad feed conversion, and overfat carcasses in growing pigs.

In the lactating sow, milk production can drop, too much weight loss can occur, and sows may not return to estrus. This can cause significant issues if you are attempting to raise your own piglets on the farm.

How to Supplement Amino Acids

Amino acids should naturally be found in food. In the wild, a pig would consume a diet that has all the amino acids it needs.

However, most pigs today are fed a formulated ratio including cereal grains and corn. These tend to be deficient in essential amino acids for pigs. Therefore, protein supplements are often used in these formulated feeds to help correct the deficiencies.

The right combination of grain and soybean meal, for instance, will offer a good balance of amino acids. This is what many feed companies use in the creation of their bagged pig feeds.

So if you’re buying store-bought pig feed, do you need to supplement with other sources of amino acids?

Probably not. It is in other situations that you may have to consider supplementing, which we will detail below.

1. Making Your Own Pig Food

Lots of people make their own pig food to save money. This isn’t necessarily a bad idea, but it’s important to remember that pigs still need those amino acids. Therefore, if you’re just feeding your pigs straight corn, they’re probably not getting the amino acids they need.

You can add other sources of amino acids such as the following to help supplement:

There are synthetic amino acids that can be added to a feed, too, but they can be pricey and don’t offer all the same benefits.

Young piglets need amino acids just as older ones do, but a significant problem arises because younger pigs (those that are smaller than 25lbs) have a harder time digesting the proteins found in soybean meal. This is why it is so important to use a creep feed that is specifically formulated for growing piglets rather than a standard feed when you are weaning young pigs.

Amino acid needs – particularly lysine needs – are directly related to age and weight. As pigs get older, their need for lysine falls. This is because they aren’t putting on as much muscle tissue as rapidly as younger pigs. They need more of their food energy for maintenance instead of growth.

3. The Ingredients Are Key

Most formulated feeds will offer enough amino acids to meet a pig’s nutritional requirements. However, this is not always true, especially when a feed producer is using synthetic amino acids and/or byproduct feed ingredients (like fish or bone meal). It’s important to always check the dietary levels of amino acids in a feed, particularly lysine.

Soybean meal tends to be one of the best sources of amino acids for pigs. Many feed producers choose not to use soybean meal for economic reasons. While alternatives like cottonseed meal, sunflower meal, and bone meal can be used, they don’t always yield the best results.

Most grains (like barley and sorghum) alone don’t provide the amino acids pigs need. However, with protein sources like soybean meal, the nutritional needs can be met.

Always check the ingredients and consider changing your pig’s feed if you think they’re suffering from a protein or amino acid deficiency.

Make sure any protein supplements you give your pigs (of any age) are not hand-fed but instead fed free-choice. These can be mixed with the grain or should be available at all times on a free-choice basis.

Have you ever noticed how little you want to eat when it’s super hot in the summertime? Pigs are the same way. Because of this, it’s a good idea to provide cooling systems (such as plenty of mud and water) to help keep your pigs from overheating.

You also should increase the amino acid levels of their feed, if possible. That way, even if their feed intake decreases, they’ll still be getting the right amounts of nutrients, regardless. Increase the lysine level by 10% during the warmer months of the year.

Some people might worry about “protein poisoning” by offering too many amino acids to their pigs. However, this is not usually a concern. It’s been estimated that diets with up to 50% protein were not toxic (though sometimes a laxative effect was observed).

Make sure you always double-check the ingredients list of your pigs’ feed – especially if you suspect that something might be lacking from their diet.

You are what you eat! Help your pigs grow strong and healthy by feeding them a diet filled with all the amino acids and other nutrients they need.