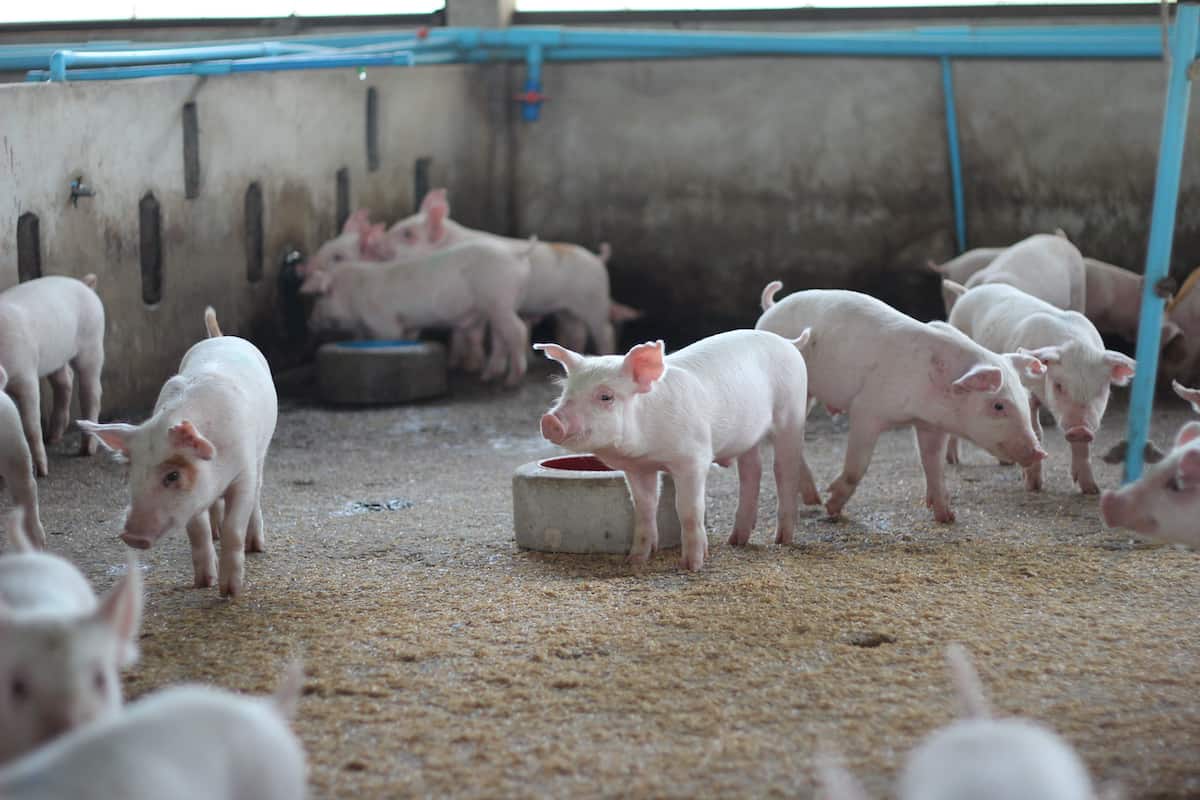 For as long as I have been raising pigs, I have always done so on a dirt floor or on pasture.

On my farm, raising pigs in this way only makes sense. We raise most of our pigs during the summer when they are rarely in a barn. During this season, only a three-sided shelter is necessary.

In the winter, we keep one breeding sow. She sleeps in a barn on a dirt floor that is heavily bedded with straw.

Ask anybody which method is best – raising pigs on concrete or dirt – and you’ll find that this is a hotly contested issue. Everybody has an opinion!

After we had some difficulties with farrowing this year, we began to wonder if a concrete floor would be better.

Here are some reasons why you might want to raise pigs on concrete. I will also give you a few considerations to make in case you decide to do so.

Reasons to Raise Pigs on Concrete

Believe it or not, about 99% of all pigs raised in the US are raised in confinement buildings, usually on concrete. In other words, they never see grass, dirt, trees, or the sun.

That’s obviously not the best way to raise pigs, but there’s a reason for doing so. It keeps them a lot cleaner.

When you raise pigs on concrete, you eliminate the “mud” factor.

There is not much to worry about, which, especially come handling or butchering time, can be quite cumbersome to deal with. If you breed your pigs with artificial insemination, the extra muck can also be quite unsanitary.

As a corollary to the last point, raising pigs on concrete also eliminates the likelihood of natural behaviors such as rooting and digging.

You also don’t have to worry about acres of pasture being destroyed (or your vegetable garden, if they happen to get out!).

3. Can Be Washed With Water

Not only will a pig barn poured on a concrete slab stay cleaner since there’s no mud, but it’s easier to remove manure too.

You can use a scoop shovel for the manure and extra bedding and since there’s a hard floor, it’s easy for you to remove it quickly. You could also use a front end loader if that’s something you have access to on your farm.

Many people also clean the concrete floor with water. This makes it easy to manage, even during the winter months.

4. Easier to Manage During Farrowing

Our biggest concern with raising pigs on dirt instead of concrete is that it is difficult to manage at farrowing time.

When you have a concrete slab, there is a solid floor that makes it easier for your sow to position herself so she doesn’t roll on her piglets. The floor is completely level.

You just can’t get the floor as level when it’s not made out of a solid material like concrete (and using any other kind of material, like wood, will leave it prone to rotting).

Add in the fact that, as you know, pigs like to root, and farrowing gets quite difficult and risky when the floor is not solid.

The Pig Site actually recommends raising show pigs on concrete whenever possible. It advises that it should have a 1 or 2% slope toward a drainage area and be finished with a machine trowel.

This prevents the likelihood of your pigs slipping when the floor is wet and also allows bedding to be used without your pig making a mess.

What To Consider When Raising Pigs on Concrete

Raising pigs on concrete is the standard for most commercial hog farms. However, you really can’t argue the fact that doing so denies them of many of their natural instincts and behaviors.

Raising pigs on concrete is fine – but make sure you adhere to these tips.

1. No Mud for Temperature Control

One of the biggest benefits of raising pigs on concrete is also one of the biggest disadvantages – there is no mud. Although there is less mess to deal with, there are also some significant challenges to overcome.

Pigs can’t sweat and use mud to cool themselves on hot summer days. Without mud, they are more likely to become sunburned (if they have access to a concrete slab outside rather than a dirt area). This can lead to many other health problems.

Therefore, you will need to put in some kind of cooling and ventilation system to help keep your pigs cool on hot summer days. Some people install sprinklers in the barn to take care of this.

If your pigs don’t have access to mud, be aware that they will be more likely to try and flip their waterers to use the water as a cooling agent. You will need to do something to prevent this, such as anchoring the water trough to the wall.

If you are going to raise pigs on concrete, you better make sure you have plenty of bedding stocked up. Without proper bedding, your pigs can develop sores, achy joints, and lameness that are difficult to reverse. You wouldn’t want to lie down on a bare concrete slab – so why would you make your pigs do it?

In relation to the last point, that bedding that you use must be scraped and removed often. Depending on the number of pigs you have and on how much space, that might mean every single day.

This can quickly turn into a major chore, so make sure you have the tools, time, and wherewithal to handle it before you commit to raising your pigs on concrete.

Fail to do this, and it’s not only going to stink to high heaven, but it’s also going to leave your pigs more vulnerable to parasites, respiratory problems, and other issues.

4. Providing Ample Space is a Must

Of course, you should always give your pigs as much space as possible. That’s regardless of whether you raise them indoors or outside.

However, just keep in mind that you will need to be even more careful about this when raising pigs on concrete in a barn.

They won’t have access to the same benefits as pasture-raised pigs (like all the vitamin D from the sun and soil!) and overcrowding can present issues such as fighting. Crowded pigs are more likely to battle with each other for space, and they’re more likely to be easily bored.

When you raise your pigs on concrete in a barn, you may find that you need to engage in preventative measures like tail docking, as your pigs will be more likely to nip and bite at each other.

5. Can Cause Foot and Leg Issues

Unfortunately, raising pigs on concrete can cause some foot and leg issues if not done properly. Osteochondrosis is one such issue, leading to the destruction of your pigs’ leg muscles, bones, and tendons. Mycoplasma arthritis is another such condition.

Usually, you can prevent both by bedding your animals deeply and avoiding overstocking.

Again, raising pigs on concrete deprives them of many of their natural behaviors.

These include things like rooting and, as I call it “excavating” for tasty grubs and bugs in the soil. Of course, for some people who raise pigs, this is ultimately the goal – to prevent destruction as much as possible. Just keep in mind that it is not the most natural way to raise pigs.

Raising Pigs on Concrete: Is it Right For Me?

Deciding whether to raise pigs on concrete is ultimately a personal decision. It works well for some people. However, for many, raising pigs on a dirt floor or, ideally, on pasture, is a better way to go.

Consider the various benefits and disadvantages of all options before you commit. Over time, you’ll find a method that works best for you and your animals.