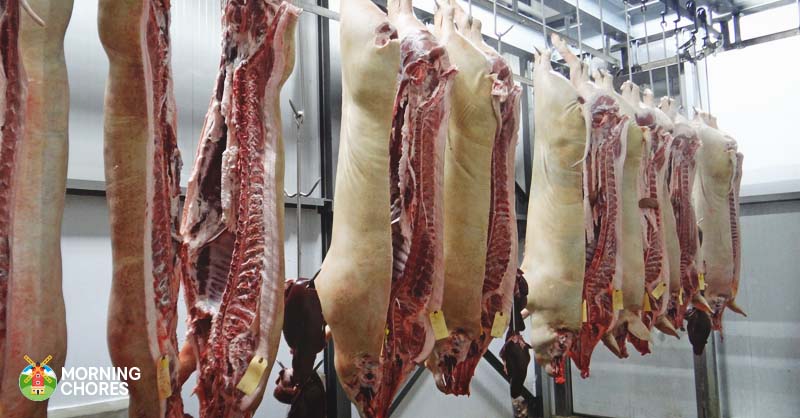 Did you know the average American will eat about 28 pigs in total in their lifetime? Clearly, we love our pork.

Yet, you have to wonder, when you butcher a pig, is it like butchering everything else? How do you properly and humanely butcher a pig?

Well, you are in luck because my husband and I recently butchered a couple of pigs.

Now, I’m going to share how to butcher a pig.

How to Butcher a Pig:

I’ll tell you upfront, we used to raise pigs. I quickly realized how much work they were, and we stopped raising them.

However, we have a friend that works on a hog farm. He often has to dispatch and waste the meat of pigs that don’t grow to size.

Instead of just burning the meat up, he usually gives it away to anyone that will come get the hog. We did this gratefully, but we had to butcher the hogs once we got them.

The first step of any butchering process is culling the animal. A pig is a little different than culling any other animal. The reason is that they are so big.

Now, when you cull a pig it needs to be shot. The breed will determine the caliber gun you have to use. Some people use a .22 rifle, but use whatever you are comfortable with and feel like will get the job done.

In our case, they used a handgun to kill the pigs. He used it because it was just easier to maneuver.

Anyway, you’ll aim right between the eyes and slightly above them. Only one shot should put it down.

However, in our case, the first pig went down just fine. The second pig, they shot between the eyes, and he just stood there and looked at them like nothing had even happened. It took a second shot to lay him down. That was an interesting experience, I must say!

Once the pigs are properly and humanely culled it is time to move on.

2. Pull Out the Heavy Machinery

I was very thankful that we actually culled those hogs at the hog farm because we would’ve never been able to move them around ourselves because of how big they are.

So we were able to use a large tractor with a front-end loader to load the pigs on our truck and bring them home, quickly. We didn’t live far from the hog farm so we knew it would be safe to take the pigs home to butcher there.

Still, assuming that you have the equipment where you are at, you’ll load the pigs up and prepare them for a bath and weigh them if you desire by hanging them from a winch. When you have the pig positioned, you’ll their throat and put a bucket underneath them, so the blood will drain into it.

Then you can weigh them.

Personally, I didn’t care how much the pigs weighed. I just knew they were massive. If you raised them yourself, then I’m sure you’ll be curious as to how big they actually got.

However, this is an option. If you decide to weigh them, then you’ll s-meat hooks in their back hocks and weigh them using a heavy-duty scale.

Then you can leave them hanging for their bath.

When you are finished weighing your pig, you’ll bathe it. If you opted out of weighing the pig, then you’ll just lay the pig on a flat surface (as we did), or you can hang it temporarily just to bathe.

The point is to not contaminate your meat and to have a clean workspace. This means that the pig needs to be cleaned off.

If the pig is hanging then you’ll wear gloves and spray it down with a water hose. From there use a scrub brush and scrub the dirt from the pig.

However, in our case, we laid the pig down on a shower curtain in the bed of our truck. We didn’t want to dirty up the truck bed.

Then we hosed the hog down and scrubbed it until we felt like the pig was clean. This did require more than one person because you obviously have to move the pig around, and be advised it is completely dead weight so it will be heavy.

In our case, this was the easiest route so we took it.

4. There is More Than One Way to Skin a Pig

When we butchered the pigs that we were given, my husband was fascinated to see how similar it was to skin a deer.

Some other people don’t feel like it is at all. I guess it’ll be up to your own opinion as to whether you feel like you are riding a bike when skinning a pig or not.

Either way, the pig must be skinned. You’ll need a sharp knife, a wash bucket with soap and water, and a knife sharpener.

Then you’ll make sure that the pigs are laid on their backs. You can use a trailer or a truck bed to accomplish a good butchering space. I suppose you could leave them hanging if you like to butcher. We just found it easier to have them more on our level, and as I said, we didn’t have the equipment to hold up such a large animal for long periods of time.

Once the pigs are laid on their backs you’ll begin cutting at their anus to separate the skin from the muscle and fat. Pay attention because unlike with a deer where the skin is a different color than the fat and muscle, a pig is not.

Once you begin slicing you’ll figure it out. Keep cutting upward until the skin is completely fileted open and only attached to the pig’s back.

Once this is accomplished you are ready to move on.

5. Clean Out the Insides

Now, this next step actually is easier if the pig is hung up. You’ll hang the pig upside down with meat hooks through its hocks.

Then you’ll cut from the anus down to where the guts are exposed. Gravity will do its job, and they will try to flop out. You’ll need to carefully cut them loose without damaging an organ because you don’t want to rupture the intestines or stomach (particularly.)

However, we had to leave our pigs on their backs because, as mentioned, we didn’t have the heavy machinery to do the job.

So we just cut from the anus all the way and exposed the guts. From there, we carefully cut them loose and removed them. You’ll see that guts usually remove pretty easily.

Also, you’ll have to use a meat saw and remove the pig’s head during this step of the process as well.

6. Divide Out the Meat

Now, it is time to divide out the meat. People have different ways of doing this. If you have heavy machinery and can hang up your pig, then you may just want to divide the pigs in two. That way you can leave them hanging, smoke them, etc.

If that is the case, then you’ll take your sharp knife and cut a slight indentation down the back of the pig straight down the spine.

Then you’ll use a meat saw and cut the pig in two using that indentation as your guide.

Again, our situation was a little different because we didn’t have the heavy machinery.

Instead of dividing the pig in two, we actually quartered it up just like we would a deer when butchering it. You’ll do this by first cutting the hooves off of the pig.

Next, you’ll find the hip joint and slide your knife into it. This will cause it to disconnect and you can cut off the two hams.

Then you’ll do basically the same thing when cutting the shoulders of the pig off.

Finally, you’ll have the center of the pig where the ribs are. You’ll take whatever meat you want from that section as well.

Then pack it on ice until you are ready to process it.

Your last step is processing the pig. I rarely pay to have our meat processed, but I did with the pigs because there was so much meat.

However, you can do it yourself by grinding some of the meat into sausage. You usually use the shoulders or the hams for this type.

Or you can smoke your own bacon and hams. You usually use the meat around the belly for bacon, and obviously, the hams can be made into delicious Easter hams. You can even cut your own pork chops.

Still, be sure that you have the proper equipment to get the job done so it doesn’t become a frustration. You’ll need things like good butchering knives, a meat grinder, and a smoker. And that is all there is to properly and humanely butcher a pig.