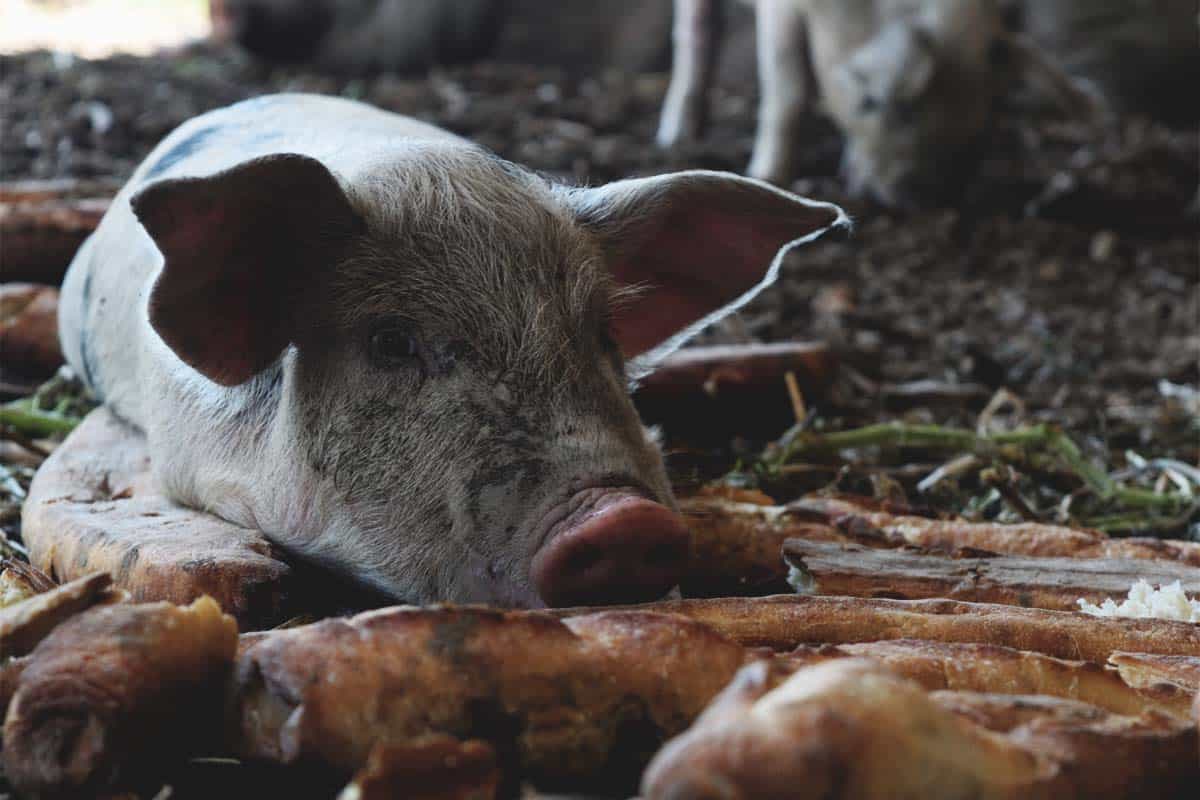 I have raised pigs for several years now on my farm, and let me tell you – it has been a learning process!

I’ve learned everything there is to know (and then some) about how tenacious pigs can be, how curious they can be, and most importantly, how adaptable they can be.

Something I still have yet to master – the pigs are always surprising me! – is what exactly to feed them for the best tasting meat.

Through trial and error, I’ve experimented with a variety of foods. By far, the best results have come from feeding pigs a diet based primarily on good, locally sourced grain, supplemented with all kinds of fresh produce (along with kitchen leftovers like cheese and milk) and finished on several bushels of apples.

Like humans, pigs are omnivores. They can eat an incredibly varied diet and still survive. Since they can eat just about anything, many people turn to the lowest-priced feeds in order to save some money. Often, turning to local bakeries for their free or low-priced day-old bread is a common route that people follow.

But is it safe? And more importantly, is it good for your pigs? Here’s what you need to know.

The Benefits of Feeding Bread to Pigs

Without a doubt, the most common reason as to why people feed bread to pigs is that it is cheap. Often, bread that is not sold by supermarkets will be sent back to the bakery. Sometimes it has expired, sometimes it’s not. Mom-and-pop type bakeries often give away their day-old bread or offload it to farmers on the cheap, too, since it’s impossible to sell.

Therefore, feeding bread can be a cheap way to feed your pigs in a crunch.

Easy to Store and Feed

When you feed bread to your pigs, there’s no mixing, measuring, or cooking required. You simply dump the bread and go. That’s all there is to it.

It’s also important to mention this, if you didn’t realize it already, that pigs absolutely love eating bread!

Plus, it’s easy to store. You’ll want to keep it out of reach of curious rodents. However, there’s not much else you need to do. It will last quite some time (especially if it’s store bought bread) even without being frozen or preserved in any particular way.

7 Things You Need to Know About Feeding Bread to Pigs

1. It Should Not Be the Cornerstone of Their Diet

If you want to feed bread and other baked goods occasionally,  you probably aren’t going to notice any ill effects. However, it’s not a complete diet. It’s lacking in crucial fiber, vitamins, and of course, protein. Your pigs need all of these in order to be healthy.

Feed a diet comprised solely (or even primarily) of bread, and you’re going to be facing a whole handful of health problems that could be easily prevented.

You’re probably wondering why it’s okay to feed pigs a diet that consists primarily of a formulated grain mixture and not of other refined grain products.

The simple answer is that those commercial feeds include a variety of products and not just grain – your pigs are getting a very targeted dose of vitamins and minerals along with other ingredients that are good for them, like corn.

2. Make Sure You Crunch the Numbers

When fed only bread, there won’t be any proper weight gain. This is because bread has more moisture and fewer calories. It can also have more salt, which can increase your pig’s water consumption.

Some people swear by feeding bread to their pigs in dry weather because of its increased moisture content. I’d be wary of the source when doing this. If you’re feeding high quality, handmade bread from a bakery, it probably has a lot less salt and can be beneficial during dry spells.

However, store bought white breads that are loaded with preservatives (you know, the kinds that don’t have expiration dates until next year!) should be avoided if you are trying to get your pigs through a drought.

While bread is fine as a supplemental feed source every now and then, the problem is that bread has about 25% less value as feed and is only economical when the price of bread is more than 25% less than corn. You would need to feed 25% more bread than you would a corn-based feed.

The takeaway here is that it might be worth your while to feed bread to your pigs if you are getting it for free, but if you’re not, you’ll want to do the math to make sure you’re not stepping over a dollar to make a dime.

3. Can Lead to Obesity and Off-Flavor Meat

As with anything, too much of a good thing can cause your pigs to gain weight.

You might be confused by this, since earlier I mentioned that feeding bread to pigs won’t lead to proper weight gain.

The key here is in the word proper. Your pigs will gain weight when only fed bread – but it won’t be the kind of weight you want. Too many empty calories will create a pig that is fatty. When it’s time to butcher your pig, most of that fat will end up in the trash can. You want a pig that gains weight, but in the meat.

Some people also claim that bread produces excess soft fat in pigs, which contributes to off-flavor meat. I personally have not found that to be the case myself, but again – I don’t only feed bread to my pigs. Try not to let your pigs gorge themselves on bread and you should be able to bypass this concern.

4. You Should Take Care in Removing Plastic

As I mentioned before, there’s not a lot that you need to do in order to feed pigs bread. That’s why so many people love to feed bread to pigs. However, you’ll want to be careful when you’re dumping bread bags into the pen. Pigs can easily swallow the plastic tabs or the bags themselves.

Even though pigs might be somewhat of nature’s garbage disposals, it’s still not a good idea to let them crunch on plastic! Make sure you don’t let any of these items fall or blow with the wind into the pen.

This could be a piece of anecdotal evidence, or it could have something to do with the limited fiber in bread. Whatever the case, I’ve always noticed that when we feed our pigs too many baked goods, they reach a whole new level of smell.

Pigs are naturally a bit stinky as it is (although it’s very easy to spread out the smell to where you don’t even notice it by keeping them on plenty of acreage). You may want to feed bread sparingly to reduce the stink.

6. Can Lead to Constipation

I already mentioned that feeding too much bread can cause your pigs to be stinkier because there isn’t enough fiber. Another issue that can arise out of this fiber deficit is that bread consumption can lead to constipation.

Just as you might get a little bit backed up when you aren’t eating enough fruits and vegetables, it’s also extremely easy for this to happen to pigs. Whole grain bread isn’t as bad as white bread, which rarely has more than 1% fiber, but it’s still not a great source of this nutrient.

Again, bread is not a complete diet. As much as we hate stinky pig poop, your pigs need to poop to be healthy!

If you want to feed bread and avoid constipation, just make sure you feed no more than a few pounds per day (this will vary depending on the weight of your pigs). You might also want to make up a slop with some other more nutritious feeds mixed in.

7. Allow for Plenty of Activity

If you’re reading this article, chances are that you aren’t interested in raising your pigs in confinement. In the 1970s, raising pigs on concrete slabs with as little space as possible was the preferred method of raising pigs.

They were not allowed to root for bugs, greens, or other tasty morsels. While their turnaround to slaughter time was quick, the meat quality was not as good as it was supposed to be.

An active pig is a healthy pig. Especially if you are feeding calorie-dense foods like bread. It’s important that you give your pigs plenty of room to roam around so that they can burn off those unnecessary calories.

Contrary to popular belief, raising pigs with lots of breathing room won’t make the meat too sinewy or tough. Trust me! We raise our pigs on almost a full acre and can practically cut our pork chops with a fork.

If you want to feed some bread to your pigs, have at it! The reality is that most foods are just fine when fed in moderation. Just follow the same thought pattern when feeding bread to pigs that you would follow when feeding your own family. Don’t overdo it, and only feed decent products (that is, nothing overly spoiled or moldy).

Bread is a great tool to help train pigs. You can even use it to teach them how to be lead and become acclimated to your present. Just don’t rely on it as the cornerstone of your pigs’ diet!