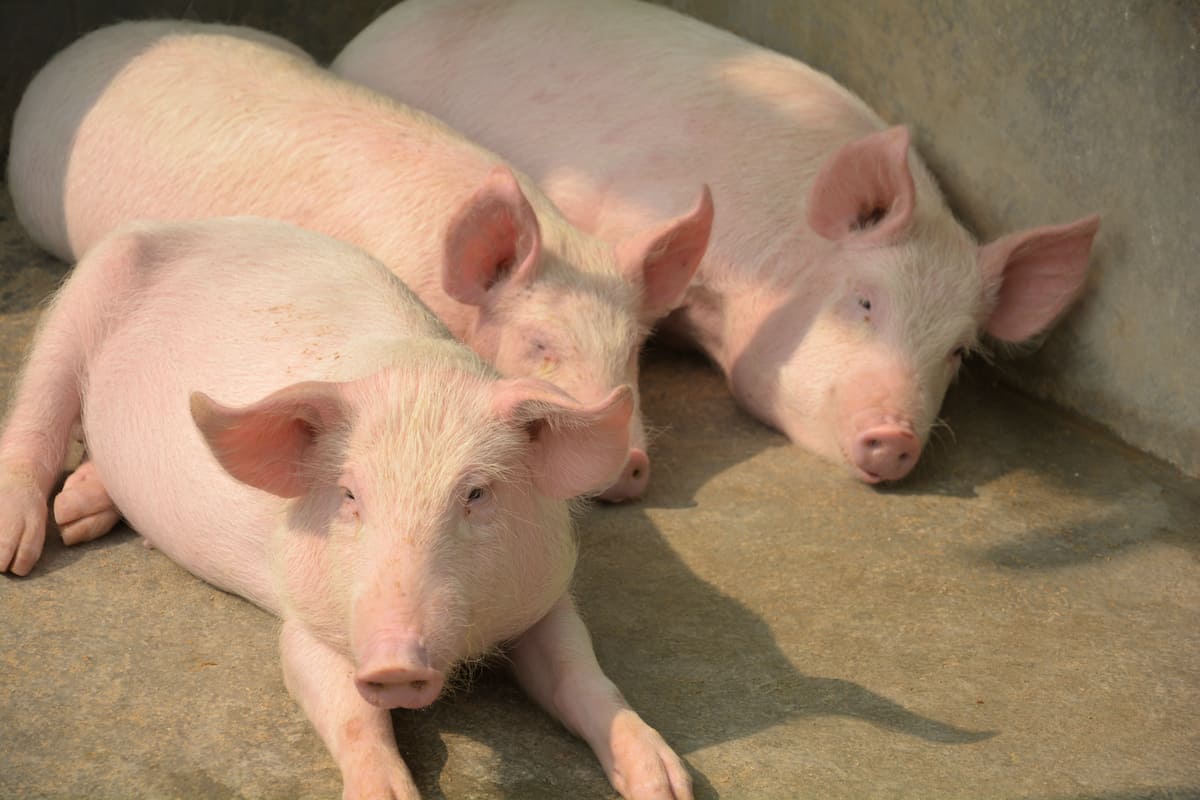 This year, for the first time ever, we found ourselves in a pinch when it came to piglets.

Normally, we rely on our breeding sow, Boo, to mother all of the piglets that we raise for meat for ourselves and for several customers. However, this year, due to the COVID-19 pandemic, we found ourselves with double the orders for meat than we normally receive. That of course was not a bad thing, but we simply didn’t have enough piglets to meet the demand.

As a result, we turned to another seller to purchase piglets. He was advertising his piglets simply as “pink pigs” and had no idea about the breed or genetic background of the pigs. Although I’m not crazy about buying piglets without any kind of information, we didn’t have much choice. These were the only piglets to be found, so we bought them.

Later, we discovered that the piglets probably had mostly Yorkshire genetics. They grew a lot differently than the heritage pigs we had raised in the past (mixtures of Tamworth, Duroc, and Berkshires) and while there were certain disadvantages to these new pigs, there were also several benefits.

If you’re new to raising pigs, you might want to consider the Yorkshire pig breed. Here’s what you need to know to help you decide whether it is right for you.

What is the Yorkshire Pig Breed?

A common breed of the domestic pig, the Yorkshire pig breed is from the US. It’s the American version of the Large White and is actually the most recorded pig breed in the country.

First developed in Yorkshire, England in the 18th century, this pig was imported to Ohio in 1830. It didn’t immediately gain traction as a popular pig breed, perhaps because it grows relatively slowly.

Over time, however, the Yorkshire craze caught on as more people realized that Yorkshires, though slow growers, could grow exceptionally large. They were also prized for their ruggedness. The breed was further improved and developed to become the pig breed we all know and love today.

The modern Yorkshire is large, whitish-pink in color, and with erect ears. Most are extremely muscular with a lot of lean meat. A mature pig can weigh anywhere between 400 and 700 pounds, though of course, if you’re only raising Yorkshire for the market, your pigs will not get that large.

One of the best reasons to raise Yorkshire pigs is because the sows are known for being quite good mothers. Most sows and gilts take to motherhood easily and can farrow unassisted. That’s not to say that you will never have any problems. However, most pork producers like Yorkshires because they don’t tend to have a lot of issues when delivering their piglets.

Though anecdotal, I’ve heard from some folks that Yorkshires aren’t as likely to roll on their piglets, nor are they likely to reject them when it’s time to nurse. They also have excellent milk production.

Although Yorkshires caught on slowly, they are now often raised by large farms for their adaptability and good growth. They grow well in confined or concentrated conditions and each litter is quite large. On average, a Yorkshire pig litter will be about 13 piglets per sow – this is much higher than what you might find with other pig breeds.

3. Good Back Fat and Lean Meat

Yorkshire pigs are generally considered medium-sized pigs, with long bodies and solid feet and legs. They are healthy and active, so while they need plenty of room to run around, you’ll be rewarded with meat that is lean and flavorful. Because they have such long bodies, you’ll likely find that the meat has good back fat (and bacon!)

Yorkshire pigs are best known for their bacon production, but they also produce fine cuts of pork chops and ribs.

Yorkshire pigs are some of the most easy-going and friendly pigs you’ll find. Of course, there is some variation here. You will always have that one pig that is just downright nasty for no reason!

Generally speaking, though, it takes a lot to ruffle the feathers of a Yorkshire pig. This was something we were quite surprised by when we first got our new piglets home. We have always raised more skittish breeds, like Durocs and Tamworths.

You can imagine our surprise when we were able to unload the piglets with minimal squealing and squawking – and then they didn’t run away from us when they got into the pen!

Instead, they spent most of their time nosing around our boots and exploring the new environment. They were not afraid of us at all but were instead quite friendly. They are generally not aggressive and are mostly well-mannered.

When I say that Yorkshire pigs have thick skin, I don’t just mean that they will happily be the brunt of all your jokes (although that could also be the case – who knows!) What this means is that Yorkshire pigs are remarkably good at withstanding harsh climates.

Despite the fact that Yorkshire pigs are often raised on “confinement” farms or for large hog producers, they are actually well-adapted to outdoor conditions. They are vigorous and can handle outdoor weather extremes with ease.

From a distance, Yorkshire pigs look white or practically translucent. However, get up close, and you’ll realize that they are actually a pale pink. They look hairless at first glance, too, so while they do have some “fur” to keep them warm, they aren’t quite as densely covered as other breeds of pigs.

This can be somewhat problematic in the heat of summer. If you decide to raise Yorkshire pigs, make sure you give them plenty of room to wallow in the mud and keep your pigs cool. Mud is to pigs as sunscreen is to humans – they need it to prevent sunburn.

Unfortunately, it might take a few sunburns for your pigs to catch on to the fact that this is what they are supposed to do. When we first started raising Yorkshire pigs, we found that they had to get at least one sunburn before they realized that the mud would make them feel better and prevent another burn.

We gave them all the shade they could possibly want, but for whatever reason, they had to learn this lesson the hard way. This is a hard one to learn, too, since sunburned pigs eat and drink a lot less than their healthy counterparts. Plus, it can’t possibly feel good.

Give your pigs plenty of shade and mud, though, and they will figure it out eventually.

Ironically, even though Yorkshire pigs are often chosen for their hardiness in confinement settings, they do grow best with a little more space. If you’re raising Yorkshire pigs on your farm, give them as much space as possible.

They are easy-going and tolerate confinement well. However, an active pig is always a healthier pig (and a less destructive pig, too!), which is why we prefer pasture-raising our pigs.

Unfortunately, Yorkshire pigs take a bit longer to reach full market weight than pigs of other breeds. Although our Duroc piglets are ready to go in about 6 months, for Yorkshires, we’ve found that number to be closer to 10 months. Depending on what you feed your piglets, this may make your litters more expensive to raise.

On the flip side, though, because Yorkshire pigs produce less fat, there’s less waste at slaughter time.

Due to their large size, Yorkshire pigs can suffer from various diseases, as can all pigs. They occasionally suffer from pneumonia, parasite infections, and bronchial issues, so you will have to take specific preventive measures to prevent these issues.

Preventative measures include offering medicated feed, using natural or chemical dewormers, cleaning the bedding frequently, and giving them plenty of room to roam.

How to Raise Yorkshire Pigs

Raising Yorkshire pigs isn’t all that different from raising pigs of other breeds. Yorkshire pigs can eat a variety of foods, including a pig pellet or crumble that is formulated specifically for pigs.

This will include all the micronutrients that your pig needs to stay healthy. You can also add kitchen scraps like bread, fruit, and vegetables.

Of course, plenty of fresh, clean water is also essential. Ideally, this is provided via an on-demand water system with nipple drinkers.

I would recommend raising Yorkshire pigs on forested pasture, where they’ll be able to nibble freely on grass, brush, worms, and other treats. Some people raise pigs fully on pasture, which of course is fine if you have enough space to do so.

Forested pasture works well for us. It not only gives the pigs room to roam (several acres, in fact) but it also provides them with shade. As mentioned early, this is essential for light-skinned pigs like Yorkshires.

Yorkshires don’t need much for shelter if you are raising them only during the summer months. Just a 3-sided barn to give them a spot to get out of the driving rain and sun is all you need.

However, if you raise Yorkshire pigs in the winter or plan on having farrowing sows, you will need a barn with lots of fresh, clean bedding. The barn does not need to be heated but it should more or less be free from drafts.

Good fencing is key for all pig breeds, but especially for Yorkshire pigs. They are curious and active. They are also incredibly smart, meaning they will return to a fence several times to test it if they are able to escape.

Are Yorkshire Pigs Right for Me?

There is no single breed of pig that will be perfect for everyone. Do your research to figure out whether Yorkshires check off all of the boxes for your farm. However, Yorkshires are hardy pigs that do well in most conditions. This includes full confinement to full pasture raising.

If you want to raise Yorkshires for the long haul (such as for breeding purposes), you can expect them to live between 6-10 years. You’ll definitely be able to get used to having them around!