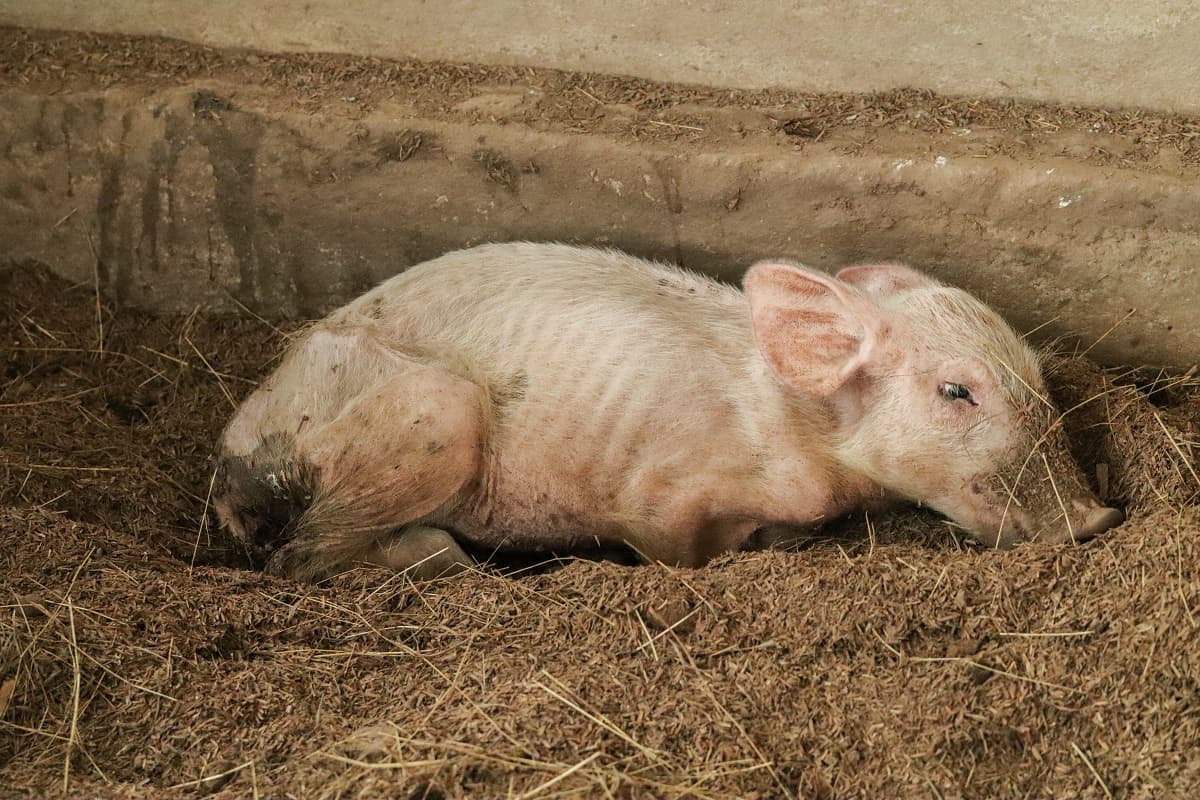 It’s not just a pig that hasn’t showered in a long time (although let’s be honest here – are you really taking the time to make sure your pig gets sudsy? If so, that’s a pig-raising strategy I haven’t heard about!).

Nor is it a pig that has eaten one too many French fries.

Instead, greasy pig is a disease that can be incredibly dangerous for an animal. A bacterial infection of the skin, it is a disease known by many names, including marmite disease.

Whatever you happen to call it, it’s important that you take steps to get rid of this disease before it makes your pigs extremely sick.

What is Greasy Pig?

Greasy pig, also known as greasy skin, marmite disease, and exudative epidermitis, may sound like a colloquial nickname meant to mock a less-than-squeaky-clean swine. However, it can actually be quite harmful.

This disease is a bacterial infection of the skin caused by the Staphylococcus hyicus bacterium. This bacterium is known to colonize the skin of many pigs, but for most, it doesn’t cause any symptoms or signs of disease. Instead, it lives there harmlessly. It is uniquely non-irritant for most pigs, so it’s hard to diagnose.

The benefit of this “secretive” nature of the bacterium is that it makes it relatively easy to diagnose when compared to another pigskin issue, sarcoptic mange, which has more obvious signs of infection.

Greasy pig can affect pigs of all ages, from young piglets to older adults. It can present in several ways, too, which can make it somewhat difficult to treat.

The symptoms of greasy pig will vary depending on the age of your pigs. In young pigs, those up to 7 weeks old, the most common sign is the development of black or brown scabs. Generally, these first appear around the neck and shoulders of the pig before they spread to the rest of the body.

Although these symptoms are usually treatable in older pigs, in younger ones, particularly those as young as 3 or 4 days, the disease can be lethal, primarily because it can cause an imbalance of fluids.

You might notice that a total blackening of a pig’s facial skin occurs. This is most common in pig litters where teeth clipping is not practiced. You may find that the entire head, face, neck, and even shoulders of weaned pigs become black as the bacteria spreads among the pigs.

As ulcers related to greasy pig begin to heal, particularly in older pigs, you may notice that extremities appear to have become gangrened or totally rotten. The rotted areas often are hairless and have distinct orange tinges. A chronically infected pig may also develop skin that appears wrinkled and thickened.

You may also notice that your pigs suffer from issues like depression and a failure to eat. You probably won’t notice a fever or oozing sores – these aren’t common symptoms of greasy pig.

Your first step in treating greasy pig is to get affected pigs away from the rest of the herd to prevent further spread.

Then, it’s time to treat the illness. Because it is a bacterial infection, it is almost always easier to prevent greasy pig than it is to treat it. Not only is it relatively easy to prevent, but overtreatment with antibiotics (the first line of defense for this disease) can lead to the development of antibiotic-resistant strains of bacteria. This can become extremely problematic later on.

Antibiotics like lincomycin, cephalosporins, or penicillins are generally the most effective treatments. You will need to contact a veterinarian, however, to make sure that you are using an effective antibiotic for the strain of bacteria and that an appropriate dose is being given. If the dosage isn’t spot-on, you may find that it doesn’t penetrate the skin well and is not effective for your pigs.

Some topical antibiotics can be used as well as the oral and injectable ones mentioned above, but again, you’ll need to consult with a veterinarian to make sure this is the right choice for you.

If you’re trying to treat greasy pig in piglets, you must get them re-hydrated. Make sure you not only provide them with ample drinking water but also replace lost electrolytes.

Finally, there are some medical soaps you can use to treat greasy pig. These remove the film on the skin and can kill local skin bacteria. However, you’ll have to consult a vet to make sure you’re not just temporarily treating the situation and are getting rid of the problem for good.

Preventative Measures for the Pig Environment

More often than not, greasy pig is going to be much easier to prevent than it is to treat. Here are some steps you can take to reduce the likelihood of it appearing on your farm.

One of the most common causes of greasy pig is fighting that damages pigs’ skin. Pigs are going to play and fight with each other no matter what you do. Just like the saying, “boys will be boys,” so, too, pigs will be pigs.

However, you can limit the amount of damage and injury they inflict upon each other by limiting overcrowding and boredom. Make sure your pigs have plenty of room to roam and that they aren’t stuffed into tiny stalls where they are left with no other alternative than to roughhouse with each other.

This can also prevent another chief cause of greasy pig, which is a layer of feces or grease on the skin. This kind of environment is favorable for bacterial development, particularly when it comes to the bacteria that cause greasy pig.

High humidity can cause greasy pig bacteria to multiply, too. Although you can’t control the weather, you can improve the level of ventilation in your barns.

Make sure you have fans running to improve airflow as necessary and remember that while insulation is important, you don’t want a barn to be too well-insulated, as this can cause moisture to build up.

When bringing new animals to the farm, take the time to quarantine new arrivals. Although the bacteria responsible for greasy pig lives on the skin of most pig populations, the strains are constantly evolving and new variants can be introduced without you knowing it when you add new pigs to the farm.

Therefore, to prevent this disease as well as many others, it’s a good idea to quarantine any new pigs you bring to the farm. Give it at least a week to make sure you aren’t accidentally introducing any new pathogens to your other animals.

This is a highly controversial practice related to farrowing – but it’s a step you might have to consider if you’re worried about greasy pig on your farm.

Teeth clipping is something that farmers choose to do to newborn piglets for several reasons, one of them being that it prevents them from damaging their mother’s teats when they suckle.

Teeth clipping can also be done to prevent piglets from injuring each other and increasing the likelihood of blood loss and of course, greasy pig. Naturally, you should explore all other alternatives before relying on this as a method of controlling the disease.

Often, you can eliminate the need to clip teeth by giving your piglets plenty of room to roam, eliminating boredom and thus, fighting.

One final tip when it comes to preventing greasy pig is to make sure your flooring is up to snuff. The disease is more common around the feet when pigs are subjected to floors and housing areas that are constantly soiled. Make sure your pigs are kept in a clean environment and replace bedding often.

The good news? Greasy pig is far less common on small farms than it is in large, commercial swine operations.

However, if you do happen to notice symptoms among your pigs, it’s relatively easy to address. Of course, prevention is the easiest method of treating this disease. This is why it’s so important to make sure your pigs are kept in a consistently clean environment.

Some farmers go so far as to wash their pigs with an antibacterial solution or soap like Savlon. However, this is rarely necessary.

Follow the steps listed above. You should be able to keep your pigs squeaky clean – and free from skin problems like greasy pig.