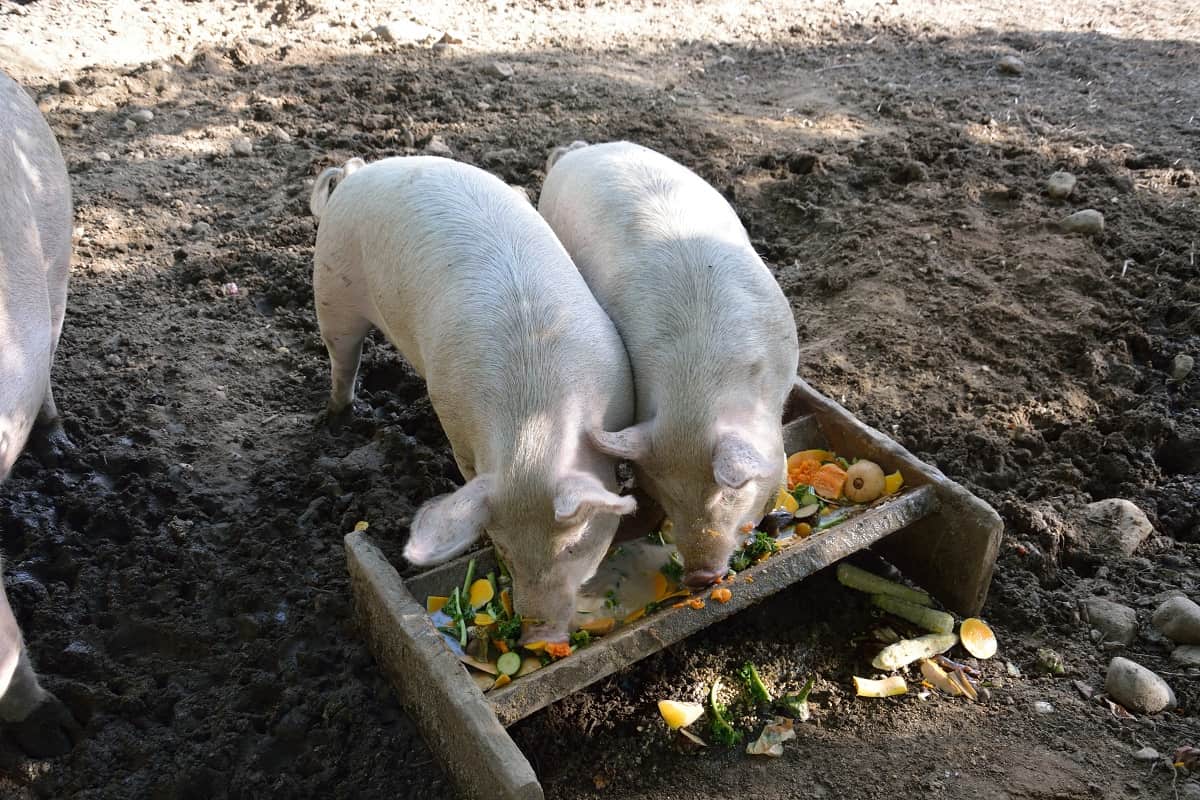 Just about every kind of food!

However, some foods, like bread and sweets, should be fed to pigs sparingly. Others, like meat, need to be avoided.

There are many benefits to being able to feed pigs table scraps, but if you want to keep your animals healthy, you must be judicious in doing so.

Here are some tips about giving pigs table scraps. With a bit of attention to detail, you can avoid most problems and reap all the benefits of these barnyard recyclers!

Can I Give My Pigs Table Scraps?

Technically, you can give your pigs just about anything – the question really ought to be whether you should.

There are a few benefits to feeding pigs table scraps.

For one, pigs are omnivores. Like us, they can eat a wide variety of foods and have the ability to digest just about anything.

Because of this, feeding them table scraps from your kitchen can cut down on your overall feed bill and improve the health of your pigs, as long as the right types of foods are chosen.

Ultimately, feeding table scraps to pigs can dramatically reduce your overall expenses and the amount of food waste your household and farm generate.

However, there are also several potential downsides – which I’ll address in more detail in the section below.

If you’re thinking about using your pigs as pseudo-garbage disposals, you may have to consider these tips first.

Meat is hugely problematic for pigs, which is why most producers choose not to feed meat at all.

One of the biggest issues is that meat products can easily be contaminated with diseases both during and after slaughter. If you’re planning on feeding meat to your pigs, it really should be held at high temperatures (212°F or higher) for 30 minutes or more.

Most people just probably aren’t going to do this.

Pigs are so close to humans in their biology and virology that it’s very easy for diseases to spread to humans. Pork is extremely problematic. It’s a somewhat standard practice among some farmers to feed dead piglets to adult pigs in a process known as “feedback.”

This is believed to protect against e. Coli and rotavirus, but this has not been confirmed.

Not only that, but feeding pigs pork has been linked to an outbreak of other diseases, including parasites that cause diseases like trichinosis.

We all remember the mad cow disease outbreak – which was caused by feeding cow remains back to cows. It’s best to avoid these problematic diseases by just steering clear of cannibalism on the farm, don’t you think?

One of the biggest challenges with feeding pigs table scraps is that it presents the potential for diseases to be spread back to humans (as well as among your herd of pigs).

These diseases often come from contaminated meat products, but that’s not it. Even if you don’t feed meat, other foods can spread disease, such as eggs.

You might be inclined to feed your pig all the leftovers that you want to clear out of your refrigerator. Most of the time, this is fine. However, any time you feed them food that is moldy, slimy, or toxic, you run the risk of making them (and yourself) sick.

If it makes you sick, it can make your pigs sick, too. Diseases commonly spread from table scraps include African Swine Fever and again, trichinella.

Pigs may be able to eat everything, as we can, but that doesn’t mean they should. Sure, we can eat a Big Mac a day for our entire lives, but our overall health isn’t going to be that great.

Pigs, especially those raised for meat, have specific needs to grow out effectively. High protein and high lysine, along with high energy via carbohydrates, are all important variables. Using premixed rations is the best way to feed your pigs.

When feeding pigs table scraps, it’s important that you not do so as the sole component of their diets.

Feeding pigs too many table scraps can cause serious problems with underfeeding.

They may prefer to eat the cheese, bread, and chicken you’re giving to them all the time instead of their feed ration (wouldn’t you?). Because of this, they might not get the nutrients they need and the calories that are necessary for good growth.

If you choose to feed table scraps, do so sparingly. Only give them occasional treats and don’t spoil them too much.

Another issue with feeding table scraps is that it’s not always legal to do so. There are 48 states that regulate scrap feeding to livestock. In Alabama, you can’t feed any food waste to swine.

According to the Federal Swine Health Protection Act, all animal products need to be heated to boiling and held there for 30 minutes by someone with a garbage treatment permit.

This law doesn’t cover food products grown on site, so you could legally feed your pigs meat if you produced it there. However, for the reasons mentioned above, it’s still not a great idea.

Check with your local cooperative extension to find out what the laws are where you live. Many of these laws only apply to pork producers who plan to sell meat to customers (instead of those raising pork for their consumption) but they can still provide helpful guidelines.

Don’t lose hope if you were thinking about feeding your pigs table scraps but are thinking now that it might not be such a great idea. There are several alternatives to consider.

1. Plans For the Table Scraps

Have lots of table scraps to get rid of? Perhaps it’s the day after Thanksgiving or you’ve just cleaned out your freezer.

You’re perfectly fine feeding your pigs anything that doesn’t contain meat and is of a decent overall quality. Some foods you can even donate to local food shelves for pantries.

Chickens can eat many kinds of table scraps and are safer with eating meat and fish than pigs are. Just keep in mind that too much of one type of food does have the potential to affect the flavor of their eggs.

For some types of food waste, composting is an option, too. Just about anything – except meat and fat – can be composted.

2. Plans For the Pigs

In general, food scraps that are considered “pre-consumer wastes”, such as weeds, fruits and vegetables, and cheese that you have not yet touched, are safe to feed to pigs. Plate scrapings can be contaminated with human disease, so it’s a good idea to skip these.

If you want to save money while feeding your pigs, consider these tips. Raising pigs on pasture can help them forage for more of their nutrients on their own and cut your costs. Similarly effective is growing and producing some of your own formulated feed.

You just need to get creative!

The best rule to follow when feeding your pigs table scraps?

Don’t feed them anything that you wouldn’t eat yourself. Pigs have most of the same muscles as humans and almost an identical digestive system.

While we often consider pigs to be the ultimate garbage disposals, you must take care of your little disposals so they don’t get sick – and make you sick, too.