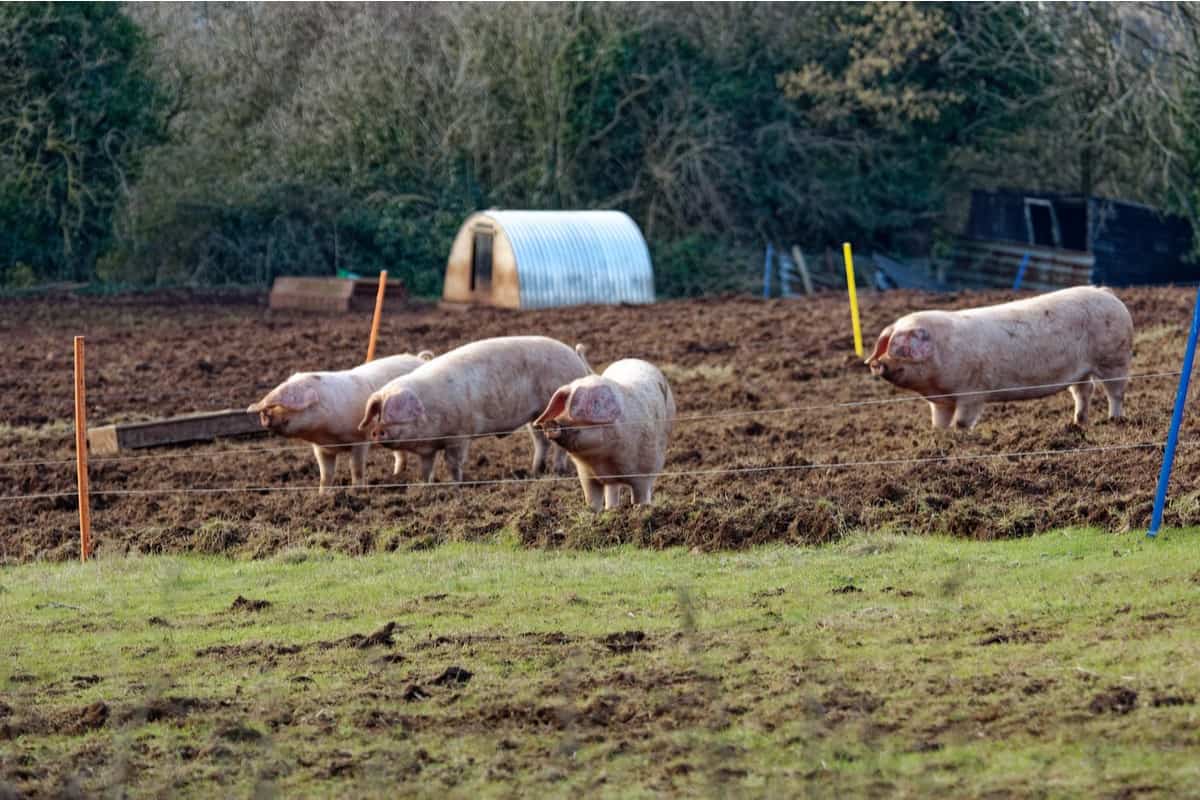 Are you thinking about raising pigs?

If so, you may have found yourself struggling to find the ideal breed.

After all, there are so many choices out there – and you’re not alone in making this decision, either.

In fact, there are hundreds of breeds you might consider, from American Yorkshires to Wessex Saddlebacks.

American Landrace pigs aren’t the most common of all breeds, nor are they the largest – but they rank right up there in both categories.

Here’s what you need to know about American Landrace pigs to help you decide whether they are right for you.

What is the American Landrace Pig Breed?

These animals generally have long, narrow heads and large, heavy ears. The back is flat or nearly flat with a slight arch, with an even, wide-flushed side. The hams are known for being plump though not overfat.

American Landrace pigs must be white and while some can have dark spots on the skin, this is considered an undesirable trait by the breed standards. For an American Landrace pig to be registered, it can’t have lots of black spots though a few small freckles are allowed.

Mature animals will weigh anywhere between 400 and 800lbs.

These pigs were derived from Danish Landrace pigs, which were developed in 1895. The United States Department of Agriculture agreed to purchase two dozen of these pigs in the early 1930s to conduct swine research experiments.

Landrace pigs were studied in comparison to other common American breeds, with Denmark holding the US to various breeding restrictions that made the development of a new breed, at this time, impossible.

Fortunately, those breeding restrictions were lifted in 1949 and the American Landrace Association was formed in 1950. The breed was developed with crosses from Norwegian and Swedish Landrace pigs along with Poland China stock.

There are some excellent reasons to consider raising American Landrace pigs – here are some of the top reasons.

Landrace pigs are known for their excellent farrowing ability. They raise large litters and because of this, are the fifth most recorded pig breed in the US.

The average litter size is around 8 piglets, but it’s not unheard of for a sow to have more than a dozen piglets each time she farrows. She can have her first litter when she is just under 1 year of age and will often continue breeding for half a decade or more.

American Landrace sows are known for being prolific breeders – but they’re even more acclaimed when it comes to raising the young that they bear.

These pigs produce lots of milk, with lactation peaking at 5 weeks. This is much later than with other breeds, making late weaning ideal for this breed.

They are great mothers, too, caring for their young with attentiveness and care.

Ask any pig producer to describe the American Landrace pig breed in a word, and they’ll likely say, “meaty.”

These pigs are known for their length and for having either 16 or 17 sets of ribs. You’ll get lots of bacon and lean but delicious quality meat.

The rumps, typically, are quite lengthy and level while the hams are also large but trim. There’s not a lot of fat here to worry about.

I already mentioned how wonderful the American Landrace pig is for producing meat.

However, it’s worth noting their bacon production in particular. Bacon from an American Landrace is lean, tender, and present in large quantities – a great quality to have for sure!

If you want to save money while raising hogs, American Landrace pigs might be the way to go.

One of the top 5 most popular pig breeds, American Landraces offers excellent feed conversion ratios. You won’t have to feed them quite as much to get a decent-sized carcass.

5. Crosses Well With Other Breeds

American Landrace pigs are often raised as purebred hogs. However, many other breeds use Landraces as breeding stock.

American Landraces cross well with other breeds, offering lots of benefits like body length (a great attribute for bacon production) and a high percentage of carcass weight in both the loin and the ham.

They also have good farrowing abilities and reach the ideal finish weight.

Of course, milk production and mothering abilities are highly sought-after traits that are found in Landrace breeding stock, too.

There are few things you will need to worry about when raising American Landraces, as they are efficient, easy-to-raise pigs.

However, since American Landrace sows are such prolific breeders, you must keep their nutrition in check. This is true, of course, for pigs of all ages and not just mothers.

A lactating sow should be fed at least 15lbs of feed per day – ideally in an on-demand feeder so that you don’t have to worry about her not getting enough to eat when she is producing so much milk.

Piglets will receive all the nutrition they need from their mother’s milk but you will have to start supplementing with creep feed when the piglets are around one week old.

This will up their protein (giving them about 18-21% protein) and take some of the stress off the lactating sow.

Once they are fully weaned, you can provide them with a mixture of grains like wheat, barley, corn, and sorghum. A commercial feed of around 14-15% protein is fine, too.

A final note on raising American Landrace pigs is that because they grow so quickly, they can have weak hind limbs. This can cause some health issues like joint problems and dog sitting.

Often, this problem can be mitigated by providing lots of room for exercise and minimizing stress. Crossing American Landraces with other “stockier” breeds may prove to be helpful if you plan on raising these kinds of pigs for the long term, too.

How to Raise American Landrace Pigs

Raising American Landrace pigs is not unlike raising any other kind of pigs. They aren’t picky when it comes to food and can be fed a balanced diet that centers around a formulated feed.

Of course, feel free to add in other pig foods like vegetable and fruit scraps or dairy products.

It’s a good idea to minimize stress as much as possible with this breed, as they can be prone to joint problems. Keep them on a deep bedding pack and avoid concrete floors.

Although American Landrace pigs are often raised in commercial settings and almost total confinement, it’s a good idea to give your pigs as much space as possible.

Although pasture-raising isn’t necessarily a requirement, giving them plenty of space to walk around without bumping into littermates is a great idea to help keep your pigs healthy.

Extra space is also important when it comes time for your American Landrace sows or gilts to farrow. Since they can be so large, it’s very easy for them to crush their piglets. Providing enough room in the farrowing stall or using a farrowing crate (though controversial) may be necessary.

Are American Landrace Pigs Right for Me?

American Landrace pigs have often been referred to as “America’s Breed.”

With a reputation like that, it’s easy to assume that these pigs are the perfect choice for every farm.

The reality, though, is that there are all kinds of pig breeds out there for you to choose from. From Yorkshires to Durocs, you’re far from limited in your selection – so choose the breed that’s right for you.

While American Landrace pigs offer plenty of advantages, there are some challenges associated with raising these pigs, too. Take all of this information into consideration when deciding what kind of pigs you’re going to use to bring home the bacon!