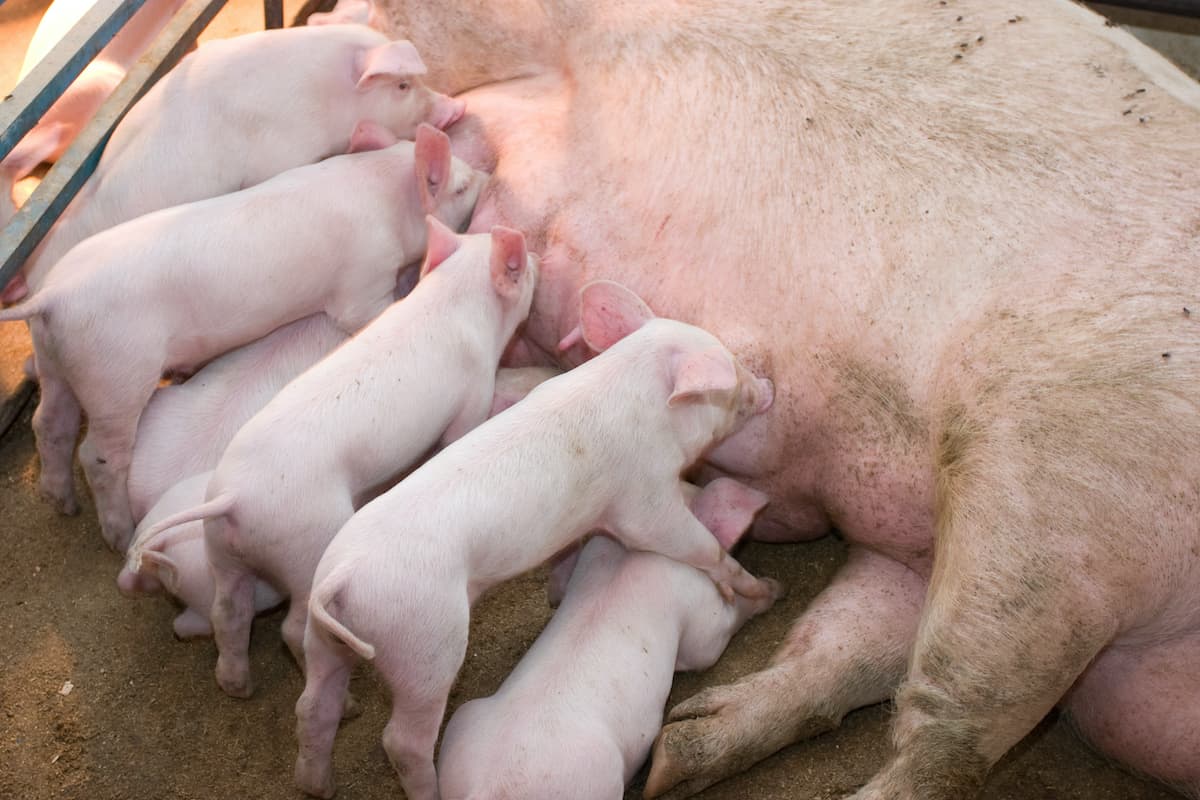 Aside from lambing season, farrowing is 100% my favorite time here on the farm. There’s nothing more exciting than watching our sow give birth to a litter of wiggly, healthy little piglets!

However, that’s not to say that farrowing is without its stressors. We have dealt with our fair share of issues over the years, from stillborn piglets to those that had trouble nursing and just about everything in between.

Fortunately, many issues at farrowing time can be prevented or dealt with by knowing the signs and symptoms of farrowing – as well as difficult farrowing when intervention is necessary.

If you’re new to the farrowing process, consider these tips to help your sows deliver healthy piglets with minimal stress for all parties involved.

Farrowing is the process of pig birth, simple and easy! The average sow has a gestation period of 3 months, 3 weeks, and 3 days. In our experience, they are pretty spot-on when they tend to deliver, too. There’s not quite as much variation in pigs as there is in other animals (sheep, for example, tend to have a very large window in which they can lamb). For more on this, see our comprehensive gestation calculator.

Gilts (female pigs who have not yet had a litter) are known to give birth a bit later, about 115 days (versus 112 days) after conception. There is a range of 113-117 days for pigs, though, so don’t worry if your sow hasn’t delivered quite yet.

Once you know when your sow was bred, mark it on the calendar. If you are breeding with a boar rather than artificially inseminating, it can be a bit trickier to pinpoint this but do your best based on signs of pregnancy.

A pregnant sow will exhibit signs such as:

Pigs can become pregnant when they are 18 months or older. In the early stages of pregnancy, pigs show very few signs. If you’re new to the farrowing process, it might be tough for you to pick up on even the most obvious ones – but do your best.

If you’re not sure that your pig is pregnant, they do make pig pregnancy tests – but these don’t come cheap. You could also have her checked by a vet.

The reason why I tell you all this is because it is so important to know when your sow or gilt is about to farrow. If your pig farrows late, it could be a sign of a problem in which you need to intervene. If she farrows too early, you might not have the necessary preparations in place to help her out.

There are a few signs that farrowing is going to happen in the next 2 weeks. This period is often referred to as “pre-farrowing” and occurs 10-14 days before the piglets are actually born.

Your sow will develop fuller mammary glands and her vulva will also begin to swell. Unless you’ve gotten in the habit of inspecting your sow daily, you might not notice the vulva changes, but the teat swelling is usually quite obvious.

About a day or 2 before your sow is ready to farrow, she will become increasingly restless. She may have a reduced appetite, too. You might notice her getting up and lying down more often, as though she can’t get comfortable.

If she has bedding in her barn, she will start moving this around in her housing. Within about 12 hours of delivery, she will make a nest out of the straw, picking it up with her mouth and moving it to a pile somewhere in the barn. Don’t intervene with this – let her handle it.

Also about 12 hours before farrowing, you will be able to express milk from the sow’s teats. This is one of the most reliable ways to tell that farrowing is going to happen soon. You might also notice a mucosal discharge around the vulva.

This is the most exciting time! Farrowing can last anywhere between 3-8 hours, with piglets generally delivered every 10-20 minutes. You will want to monitor your sow closely during this time, but give her space to do her own thing. You should only intervene if your sow has had high stillbirth rates in the past and/or if there is a gap between the first and second piglet of 45 minutes or more.

Your pig will lie on her side prior to delivering a piglet, often shivering and lifting her upper back leg. If she struggles to do this and gets up frequently, keep an extra close eye on her, as it might mean a piglet is stillborn. Either way, she will twitch her tail just before she births a pig.

What to Do After Farrowing is Complete

Farrowing will complete after a few hours, but your sow isn’t quite done yet! She needs to deliver the placenta. This will take place over 1-4 hours and is the only way you’ll know that your sow has finished farrowing.

You don’t need to do anything to help her deliver the placenta. Watch and wait for it, then make sure your sow is feeling well. A healthy sow will appear to be at peace and will call to her piglets. She will stop shivering and her top hind leg will stop moving constantly. If she doesn’t, even after you think she has delivered the placenta, you may want to call a vet or intervene – there could still be a piglet stuck inside.

After the sow has delivered her piglets, make sure she has access to plenty of fresh, clean water and food (although she might not eat or drink right away). Help the piglets nurse and make sure all have had access to colostrum. You’ll also want to provide them access to a roll-away box if you aren’t using a farrowing crate, where they can get away from the sow in case she rolls (this can prevent unnecessary piglet deaths).

You may notice that your sow has a slight, occasionally heavy, discharge over the next 3-5 days. As long as your sow is moving about normally, eating well, and has no obvious problems with her udders and teats, it is nothing to worry about. However, there are rare circumstances in which bacteria has entered the uterus and caused inflammation, which will require treatment.

Signs of Difficult Farrowing – and When to Intervene

Knowing when to intervene during a challenging farrowing is one of the hardest parts of the farrowing process. Last year, we had a particularly difficult farrowing when our sow delivered several stillborn piglets and then rolled on several more. We later discovered that much of her farrowing difficulties were related to her being extremely overweight – something we had never even considered.

We did have to intervene several times during that delivery, but in most cases, you shouldn’t have to do anything at all. There are certain signs to watch for in difficult farrowing where interventions are necessary.

Know the signs that your sow needs help. She might have gone a long period of time without delivering any piglets or she could be panting heavily and in obvious distress.

A failure to deliver the piglets could be caused by any of the following factors:

…and many other factors.

Ultimately, farrowing difficulties can be caused by just about anything, and as a result, there are different ways in which you might need to intervene. However, know that in most cases, intervention is not necessary, and calling a vet is recommended if you aren’t sure what to do.

Fortunately, your biggest tool in preventing farrowing problems is knowing when farrowing occurs so that you can be prepared. You’ll want to have a nice, warm place set up for your sow to farrow along with a heated area for the piglets and other gear, like towels, OB lube and sleeves, and antibiotics.

If it’s your first farrowing, clear your schedule and plan to be there on the day of farrowing (and ideally the day after, too). That way, you’ll be ready to go at a moment’s notice in case any problems arise.

Even if they don’t, trust me – it’s a process you’ll want to witness for yourself! Don’t miss it.