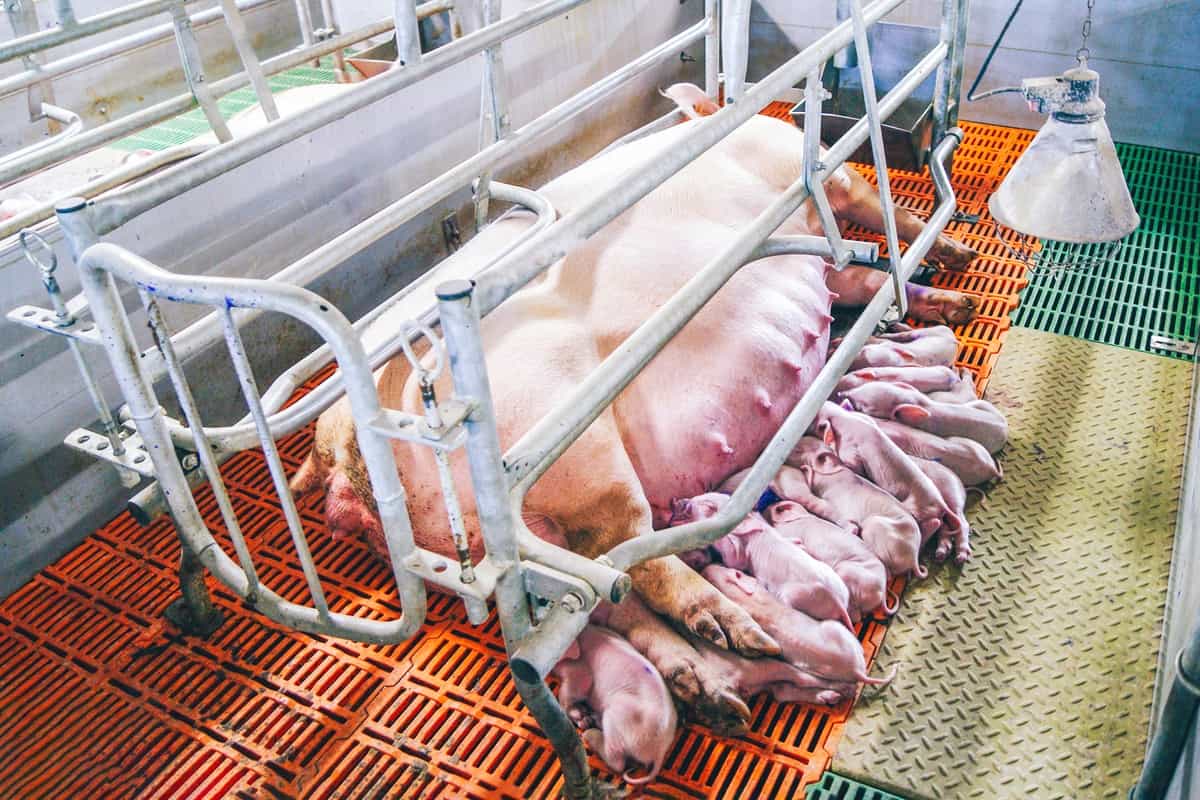 In the last couple of years, we’ve gone back and forth about the best ways to ensure that both our piglets and sows remain healthy, comfortable, and most importantly, alive, during the farrowing process.

Although they don’t do it on purpose, it is very common for farrowing sows to roll on their piglets either during farrowing or shortly after.

In fact, in one year, we lost a total of 7 piglets to an overweight sow who had difficulty farrowing and consequently, kept rolling onto her piglets as she readjusted herself.

Because sows are so much larger than their piglets – a farrowing sow can weigh several hundred pounds while her piglets often weigh just a few – it is very common for this to occur.

We’ve lost dozens of piglets over the years to this unfortunate tragedy. It’s not uncommon, though, and it’s the reason why farrowing crates were invented.

They’re designed to ensure the safety of both mother and piglets, but many people feel that they go against the natural behaviors of pigs.

If you’re trying to decide whether farrowing crates are ethical, unfortunately, you won’t likely find a clear answer to the question.

It’s a heated debate – and it’s not always black and white.

What is a Farrowing Crate?

Farrowing crates are sometimes referred to as gestation crates or sow stalls but they are technically not the same.

While gestation crates are meant to be used during just that period – gestation – farrowing crates are to be used only immediately before, during, and shortly after the piglets are born.

Gestation crates are often used to increase production and to ensure that a sow’s nutritional needs are met during pregnancy. When they’re housed in crowded conditions, pregnant sows either eat way too much or way too little. Aggression can also be an issue.

Because of this, gestation crates serve to separate animals to keep them safe, well-fed, and administer vaccines and other medications as needed.

Most farms do not use gestation crates (except large commercial operations). Some, however, rely on farrowing crates. These are designed to provide the room for her to give birth and to provide for her nursing young.

Farrowing crates can decrease the mortality rate of piglets in open farrowing areas from 30% to as little as 6%.

The design is simple.

Most farrowing crates are around 7-feet long and contain butt bars at the rear and anti-lying bars around the rest of the crate. These prevent a sow from lying on her piglets while they are being born as well as while she is lactating.

Farrowing crates provide sows with significantly more room. They are only used during and immediately after farrowing, not for the entire pregnancy.

What is the Purpose of a Farrowing Crate?

Most farrowing crates are used from about 5 days before a sow is due to farrow until when the piglets are weaned.

This usually occurs when they are about 28 days old. When all is said and done, a sow is kept in a farrowing crate for about one month.

Some producers rely on farrowing crates to help them more easily monitor a sow’s health, administer medications, and tend to other tasks.

However, the primary purpose of a farrowing crate is to prevent the likelihood of sows crushing their piglets.

Fully grown sows are extremely heavy – newborn piglets are not. If a sow accidentally steps on or rolls onto a piglet, she can injure or kill it instantly.

Farrowing crates reduce the risk of piglets being injured or killed.

Even if you aren’t running a large commercial hog farm, you may consider using farrowing crates to deal with the frustrating reality of dead piglets.

That’s because they are so small. They prevent a sow from turning around and only allow them to move slightly forward and backward.

Not only that, but it only provides a creep area for piglets. Although they can reach her teats to suckle, the sow cannot clean or otherwise interact with her piglets. This can impact the bonding process and lead to other health issues as well.

They can also interfere with the farrowing process before it begins.

You probably already know that one of the main things sows and gilts do before farrowing is to create a nest.

This is normal behavior that can’t be done with a farrowing crate – even if nesting material is provided, there often isn’t enough room.

This can create confusion in a farrowing animal along with unnecessary stress for her that could otherwise be avoided. A sow that is confined until her piglets are weaned can become more aggressive, frustrated, and stressed. Once the sow is released from the farrowing crate, it is more common for her to attack her piglets, too.

Because of this, farrowing crates are illegal in many parts of the world. Countries such as Norway, Switzerland, and Sweden have banned their use.

Alternatives to a Farrowing Crate

Although there are lots of disadvantages to using farrowing crates, the fact remains that there needs to be something done to save the lives of piglets. On my farm, we were always very anti-farrowing crates. That is, until we lost 7 piglets overnight, all at once.

Fortunately, we have discovered that there are a few other things you can do to help save your piglets and ensure your sow is healthy and well cared for.

One is to make sure that you are well-aware of the farrowing timeline.

Pigs are pretty precise in their gestation. The gestation period is 3 months, 3 weeks, 3 days, and they usually hold pretty tightly to that timeline.

Knowing when your sows are about to farrow is essential because it will ensure that you can be there to monitor the situation.

You’ll know if your sow is having difficulty farrowing and whether you need to intervene to save lives.

Providing pigs with more space can be helpful, too.

Give them plenty of fresh, clean nesting material and a dry area in which to farrow. This will ensure that they are comfortable.

This can reduce much of the tossing and turning that might happen during farrowing – and cause newborn piglets to be crushed.

We came up with a simple solution on our farm to build “bumpers” around the farrowing area. Our sows farrow with plenty of space but the bumpers are installed low to the ground. While the piglets can run beneath the bumpers, a sow can’t fit any part of her body beneath them. This gives the piglets a place to escape to when a sow starts to toss and turn.

This has significantly reduced our piglet mortality rate, as has one other intervention. We prioritize getting the piglets dried off immediately after they are born.

We noticed that our piglets wanted to crawl beneath their mothers after being born. They were shivering and obviously cold, running beneath Mama for the extra heat.

However, as you can imagine, this increased the likelihood of them being crushed.

To counter this, we now dry off each piglet after it is born with a towel. Then, we place it immediately on a black stall mat beneath a heat lamp. This is in a creep area that the sow cannot access.

The piglets can run in and out to get warm (and later on in their lives, to get water and creep feed). However, they don’t have to worry about being rolled on.

Acquainting the piglets with this warm, dry area as soon as they are born is important. It helps ingrain it into their memory that they have an alternative to go to.

Many of them choose to sleep here since it is so warm. That way, there are fewer piglets for Mama to have to worry about stepping or rolling on.

If you aren’t comfortable using a heat lamp in your barn, you don’t have to. You could even use something like a heat plate or heating pad.

There are currently “loose housing” systems being developed and tested around the world.

These are meant to be simple, easy to manage, and ideal for animal welfare. However, since they’re new, they are difficult to find and costly.

Should You Use Farrowing Crates?

If you’ve been trying to decide whether to use farrowing crates with your sows, then hopefully, this information has been helpful.

It’s not a decision that I can make for you, nor is it an easy one to make.

Ultimately, you’ll have to weigh the pros and cons of such a system before you dive in.

While they are controversial, farrowing crates do have their place in certain settings. Consider these tips as you’re trying to decide on your own farm!