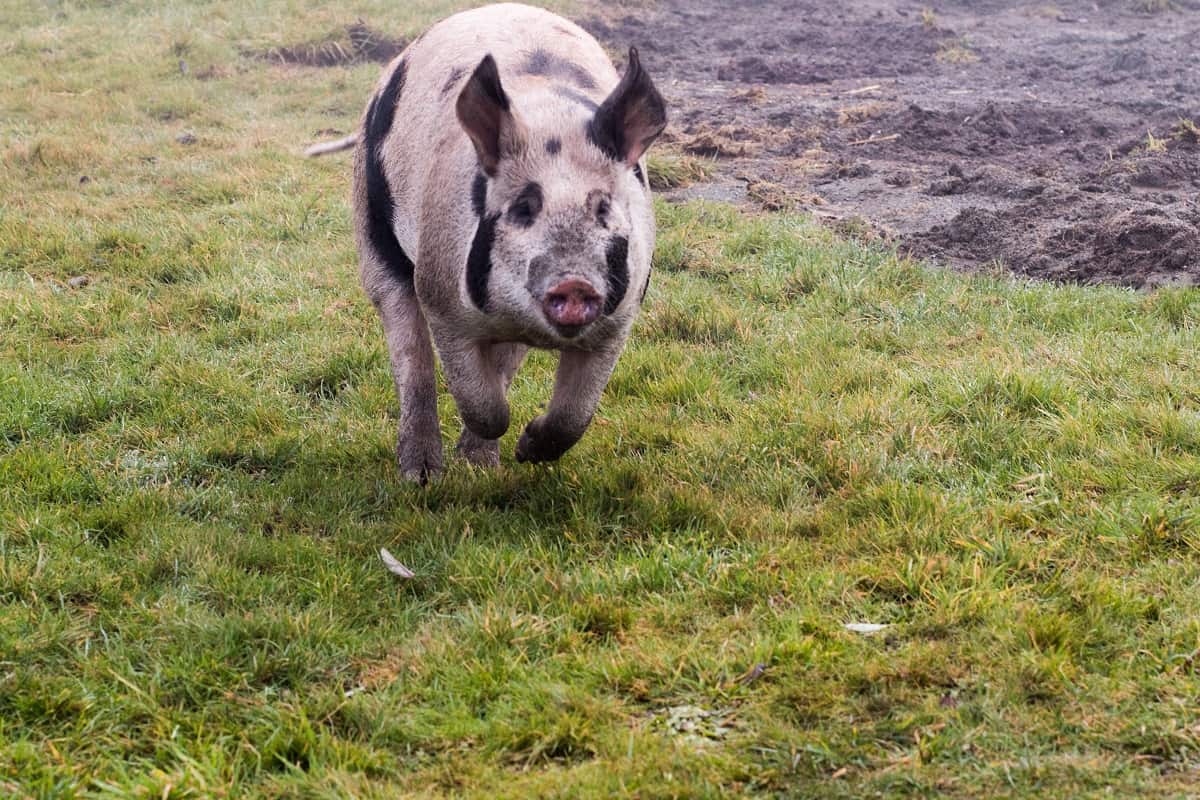 For the most part, I have been lucky in my on-farm interactions.

I was attacked by a rooster once. He spurred my leg and caused some bleeding, but nothing major (though I must admit that rooster didn’t live long past that incident, as we decided he was better suited to the stockpot).

I’ve never been attacked by a ram.

And once – but only once – have I ever been attacked by a pig.

Sure, I’ll have a pig nibble on my boots now and then, but that’s behavior rooted in curiosity and not an intent to harm.

However, once, I was charged by a gilt who perceived me (for reasons that are still unknown to me) as a threat.

Understanding why a pig might attack or become aggressive is important if you want to stay safe on your farm.

After all, pigs can be quite large – this one was well over 200 pounds – and if you aren’t familiar with how to behave around them, they may attack seemingly without warning.

Here are some tips on how to deal with a hostile pig so that you don’t have to worry every time you step into the pen.

There are several reasons why a pig might become aggressive. Knowing the root cause of aggression will help you predict and address it in the future.

The breed is one of the most common causes of aggression. It is second only, perhaps, to the specific disposition of the individual pig.

To the greatest extent possible, select breeding boars and sows based on calm, friendly behavior and avoid keeping those that are naturally more ornery.

Do not select alpha males as breeders.

When choosing pigs for your home, consider those that have friendly tendencies such as Yorkshires, Durocs, and Hampshires.

Just about every kind of animal will be a bit cranky and more hostile during breeding periods.

As soon as your animals are sexually mature, you need to watch out for signs of aggression related to heat cycles.

Very early in a pig’s life, its mother will teach it how to behave among other pigs – as well as around you.

If this social education doesn’t occur – perhaps because the piglets were pulled from their mother too soon or for some other reason – pigs might behave more aggressively.

Regardless of whether your pigs are “trained” on how to behave by their mothers or not, make it a point to interact frequently and positively with your animals as early in their lives as possible. Try hand-feeding to create a positive relationship (but watch those fingers!) and talk to your pigs. They’ll learn to recognize your voice.

Again, as with any animal, stress is going to increase the likelihood of aggression.

Make sure your pigs are provided with free and ample access to food and water.

Don’t overcrowd your pens. Ensure your animals are regularly checked by a veterinarian and given proper health checks and care (including vaccinations if necessary).

There are lots of wonderful reasons to consider housing pigs together. Pigs are social creatures that need other pigs to stay healthy and happy.

However, groups of pigs will almost always need to fight to eke out the dominance hierarchy at least a little bit. Bodyweight and size don’t always predict who will be the top dog, although it can give you a bit of a prediction.

Competition, especially when resources are scarce, can be intense.

While it’s usually harmless, aggression among pigs due to competition can be dangerous if they are unmatched in size and age.

Often, aggression on the part of one sow toward smaller animals can cause the smaller pigs to avoid going to the feeder. Competition can also increase the likelihood of aggression toward handlers.

Dealing with an Aggressive Pig

When dealing with an aggressive pig, you’ll have to first decide whether the aggression is directed more toward you or other pigs.

However, aggression toward you is another beast entirely and must be addressed on a case-by-case basis.

1. Try Not to Introduce New Animals to Large Groups

This might not make a huge difference in terms of aggression toward you. However, if you find that individual pigs are behaving aggressively toward other pigs, it might make sense to consider your herd dynamics.

As I mentioned earlier, aggression is often inspired by a need to sort out the dominance hierarchy. Adding new animals to the mix can make this worse. Try not to introduce new animals.

If you must, do so in groups rather than individually and try to make sure all pigs are more or less evenly matched in size.

Keep a close eye on all of your pigs after introducing new members. Separate pigs if signs of aggression begin to manifest. Ultimately, if aggression hasn’t tapered off within 48 hours, you probably need to move pigs to new locations.

2. Give Them Some Space

Space is essential for so many reasons, but especially when it comes to minimizing aggression.

Pigs often behave in a hostile fashion when they feel cooped up and crowded. After all, wouldn’t you? Giving them a bit more breathing room can help to minimize aggression.

It also serves another purpose.

Should pigs become aggressive toward each other, a bit more space will be beneficial in that it will give the “victimized” pigs places to which to escape.

You may also have to add obstacles like straw bales or hiding barriers to give them spots to run to.

By interacting with your boar or sow often, you’re less likely to startle him or her accidentally and provoke an attack.

However, many times, attacks occur because a handler unintentionally snuck up on the pig and he did not see the handler.

Speaking to your pig frequently can help with this issue. He will become familiar with your voice. If you speak as you approach, you won’t have to worry about scaring him.

Remember, pigs have poor vision, especially when compared to their other senses, like smell.

4. Be Careful During Farrowing

As you might expect, the likelihood of aggression skyrockets during farrowing. The only other time that might compare is during breeding and heat cycles.

Do your best to minimize stress during the farrowing period.

You can protect yourself by keeping your sow in a farrowing crate, but this isn’t desirable for many pig farmers as it keeps the sow more confined.

Of course, even if you keep your sow in a crate, you’ll need to be careful pulling out piglets or working around the sow. She can still bite through the bars and might even be able to jump out of the crate.

Adjust your management practices during farrowing to minimize stress.

Try to interfere as little as possible to reduce the likelihood that a gilt or sow will attack to protect her piglets.

Distraction materials like sacks, cardboard boxes, and other “toys” might not help much when it comes to preventing an attack from a protective mama pig.

However, they are extremely helpful when it comes to working with boars.

Boars tend to be most aggressive toward other boars, engaging in a mountain of behavior and other aggressive tendencies.

Try providing distraction materials when boars are most active during the day and make sure you have enough for all the pigs in your herd to reduce fighting for resources.

6. Don’t Get Between the Pig and What it Wants to Get

Dealing with aggressive pigs can be challenging, especially if you’re trying to think on your feet as a pig is charging you.

Fortunately, domesticated pigs rarely show this kind of aggression – if they do, there’s something seriously wrong.

Get out of the way as quickly as you can.

Whenever possible, wear thick gloves and steel-toed boots while working with your pigs. This can reduce the likelihood of potentially devastating bites. Be extra cautious, again, during breeding, farrowing, and transportation.

Limiting boredom and providing plenty of social interaction (both with you and with other pigs) is instrumental in dealing with hostile pigs. Of course, lots of food and water don’t hurt, either.

Work and interact with your pigs often. That way, you’ll know what behaviors to expect from them – and how to minimize any aggression within your herd.