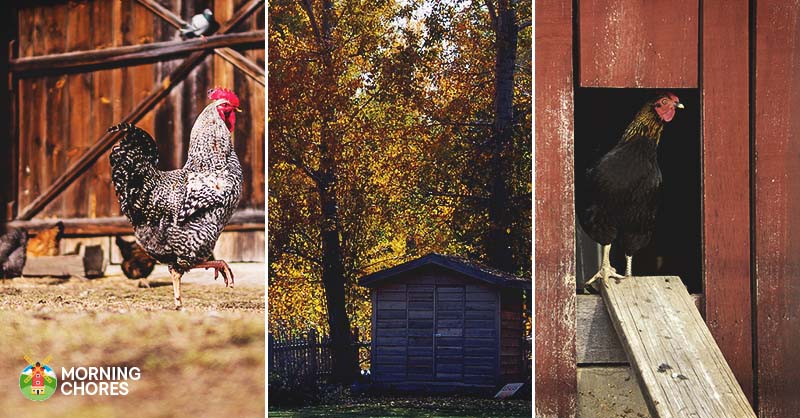 Are you on the hunt for a really cute chicken coop design, but you don’t want to spend a small fortune for the ‘cuteness factor?’

Well, this girl understands. I just recently moved to our new homestead. With this process we wanted to build a new (and cuter) chicken coop.

Okay, actually, I wanted a cuter chicken coop. At our previous home, we built our coop on a super tight budget. It did the job and was still in great shape when we moved.

But this time, I wanted something a little different. Which is how we came up with the idea for a log cabin chicken coop. It was less expensive than some cutesy designs I had seen.

Yet, it still satisfied my need for something that was functional and pretty simultaneously. 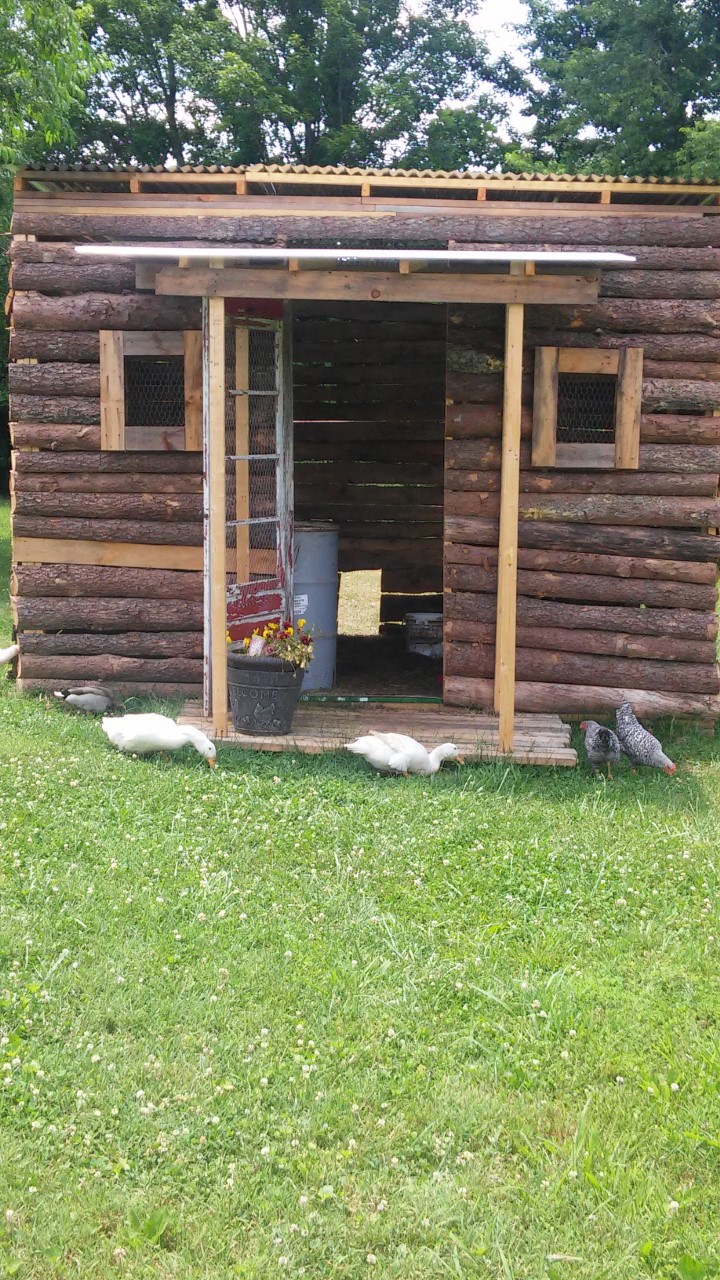 To begin, we laid plastic on the ground where the coop was going to be built. This was to ensure that no grass or weeds would grow up underneath it. It just made for easier maintenance.

Then we had to make our ground a little more level. It is amazing how everything looks level until you actually begin building on it.

So we did this by laying out our landscaping timbers. Then using a level to see how far off we were. When we saw that things were uneven, we used bricks and pieces of cinder block to make things level again.

Once we felt the foundation was level, we were ready to start building on it.

Once our foundation was level, we placed a piece of plywood onto the landscaping timbers and nailed them into place.

Now, this will not be a coop that is easily movable, but it could be moved if you really need/wanted to. It isn’t fastened to the ground with concrete or anything like that.

Once the plywood was in place we were ready for the next step.

3. Made the Floor Pretty

Next, we laid linoleum on the floor. It isn’t actually to make the floor pretty. In fact, I recommend that you buy the cheapest (and potentially ugliest) linoleum you can find.

Because you aren’t really going to see it. The whole purpose of the linoleum is to keep the chickens from rotting the wood with water, poop, and pee.

Plus, it makes for easier cleaning. When you go to clean the coop, you can just scrape the layering material out of the coop and hose off the floor if needed.

Once we laid the linoleum, we cut it to size and used a staple gun to secure it to the plywood.

Next, we framed up the walls. If you’ve never framed up a wall before, you basically attach a piece of wood horizontally to the floor that is the length of the wall.

Then you add two vertical supports to either side of the piece you just attached to the floor.

Next, add a top piece. Then you’ll need to add diagonal supports from the top to the bottom. You do this all the way around the coop.

You’ll then repeat the process when framing up the door.

Then we framed up the roof. You’ll need to decide how much of an incline you want the roof to have. It needs a little so rain water will run off of it instead of laying on the roof and causing it to rot eventually.

So you’ll then frame out the roof basically the same you do the wall. Just instead of everything being vertical, you build it horizontal.

Also, you’ll need to fill in the space in the center of the roofing frame with 2×3’s that have been cut to size so it will be able to support the roofing material.

The next step was to actually make the coop look like a log cabin. We accomplished this by adding slabs to the side of the coop.

So we did this by just nailing them to the framed walls. Then we cut the slabs down when there was any excess hanging off of the sides.

Then we went around the whole coop until the job was finished. This is what saved us a ton of money in this project because we were able to get the slabs for free.

We did this because we have a sawmill near our home that discards its slabs and allows anyone that wants them to come get them for free.

If you have a sawmill or lumberyard near you, check with them to see if they offer the same benefit. It can save you a lot of money. Here is another project we built out of slabs.

There is something about a tin roof that just says country living to me. Where we live now, we have beautiful pastures and mountain views. It doesn’t get a whole lot better in my opinion.

So my chickens needed a little country cottage too.

Plus, tin was a lot cheaper than trying to put a shingled roof on it.

So we purchased a few sheets of tin and nailed them to the frame. It was super simple. Just be careful when working with tin because it does cut very easily, and you don’t want to get injured trying to build your chickens a home.

So we are now getting into the cute design stuff. We added windows to our chicken coop. Not only does it add something special to the coop, but it is also great for ventilation.

But it was pretty easy to do. My husband used his Sawzall and cut squares from the inside of the coop.

Then he covered the windows with chicken wire for protection. He gave them two windows on the front side.

Next, he filled the gaps where the roof was framed at an incline. It leaves a slight gap at the top of the coop because of the incline. You’ll need to be sure to use chicken wire to fill that space because a predator will definitely use it as an entrance to the coop.

8. And Then There Was a Porch

The porch was really for me. I thought it added a little something extra to the coop so my husband built a wonderful little porch onto the coop.

He did this by using landscaping timbers as the support for the porch. Then he used 2×4’s to actually create the floor of the porch. He then nailed them into place.

Next, he added four support beams. There is one at each corner. He then nailed those into place.

Then he framed up another roof (though smaller) in the same fashion we framed up the coop roof.

Finally, he added the tin roofing material to the roof frame. Next thing I knew, I had a porch on my chicken coop. 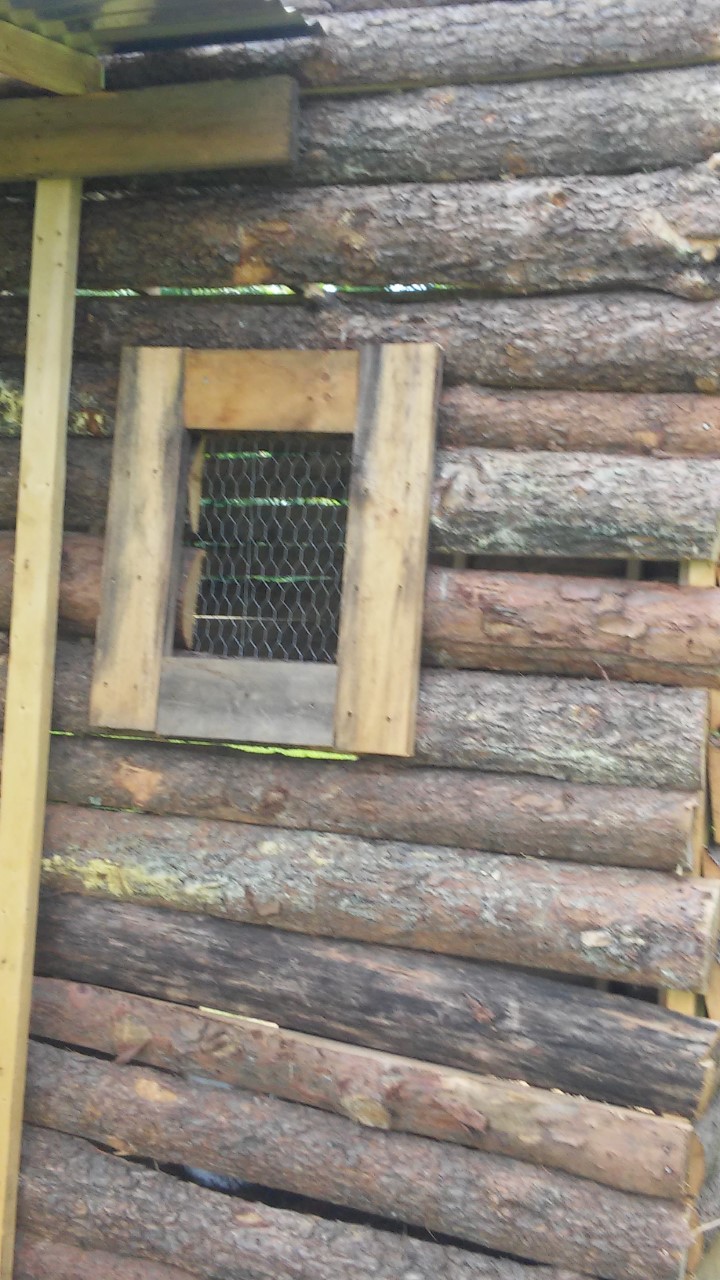 All that was left to finish my log cabin coop was a few accents. The first accent we added was trim to the windows. My plan is to add window boxes to the coop windows down the road.

But considering I’ve lived here for all of two weeks, that just hasn’t happened yet.

So for now, we just used pieces of left over wood and cut them down to size to frame out the outside of the windows.

Then we added a really cute rustic door. There is a local couple up the road that sells vintage windows and doors for $10. I do plan on painting my vintage door at some time, but for now, I thought it was adorable.

But we did have to add a different latch to make it secure.

Also, we knocked the glass out of the door and replaced it with chicken wire. 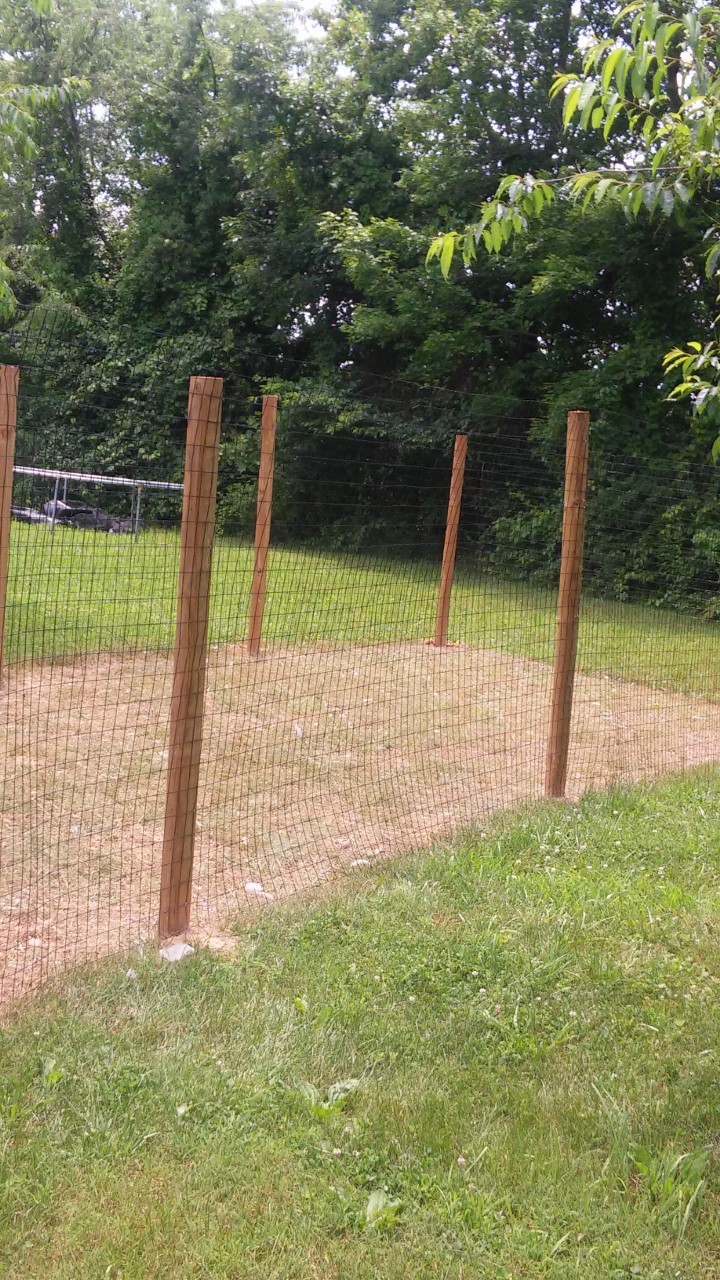 Next, we built a run off of the back of the coop. It consists of large circular posts at each corner.

Then we used 6-foot wire fencing to make the fence. Eventually, we will put poultry netting over the top if we deem it necessary.

Actually, we are contemplating allowing our chickens to free range since we have so much room now.

But until we finalize that decision they have a run to hang out in. We then cut a little hole on the back of the coop for them to use as a door.

Finally, we finished this project by adding the basic necessities that every chicken coop needs.

First, we added roosting bars. These are just big sticks that we gathered from the property. They are angled diagonally on one side of the coop. We did this on purpose so they’d roost on one side and eat on the other side.

But I decided to make them even so it would be one less thing for my chickens to have to adjust and fight over after the move.

Second, we added the feeders. We use large PVC pipes that form little feed shoots for the birds. We attached them to the side of the coop wall so the chickens can eat as they please throughout the day.

Third, I added their water bucket to the coop. We have an automatic watering system that we plan to install at a later date.

For now, they just drink from a bucket as this seems to make them the happiest. They get plenty of water and can gulp (which chickens love to do.)

Finally, we added the nesting boxes. My husband transformed scrap wood we had into 3 nesting boxes. They are on the same side of the coop as the feed to discourage our chickens from sleeping in them. They did that all of the time in our old coop.

And that was a habit I wanted to break as it left our nesting boxes messy all of the time.

Well, I think that covers how we built our log cabin coop. Obviously it can be built to any size you desire. Hopefully your birds will enjoy it as much as ours have.

But I’d like to know what you’ve done to fancy your coop up on a budget. I know things have to function but creating things that are appealing to the eye can make you feel good too.

We love hearing from you so please leave us your thoughts in the space provided below. 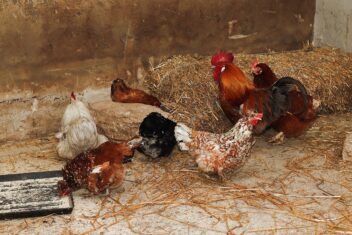 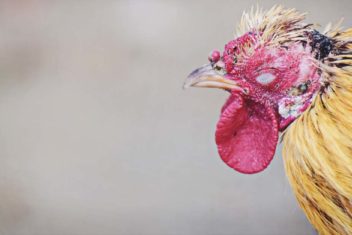 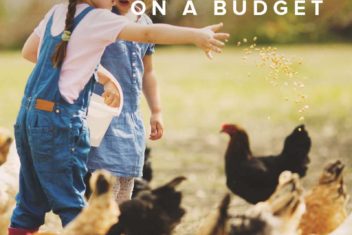 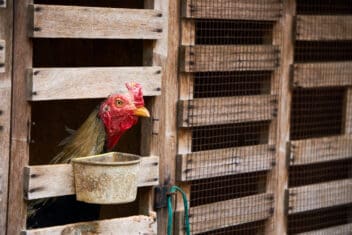