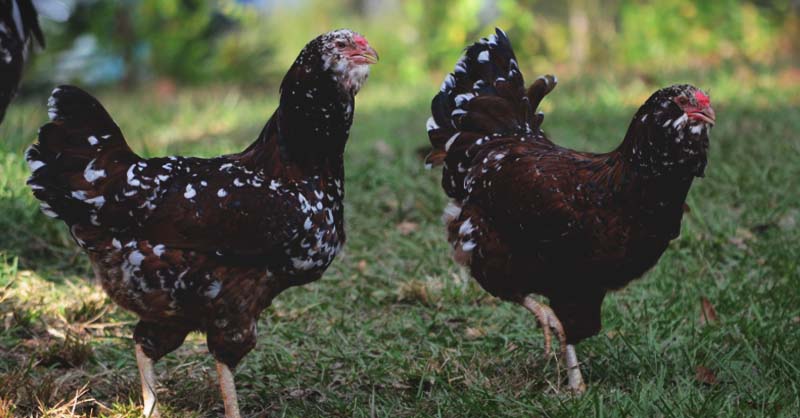 Here is a rather unique and beautiful bird that you may have never heard of! The Russian Orloff used to be a critically endangered breed, according to the Livestock Conservancy.

Currently, the breed is still listed as threatened and needs to be discovered by more poultry keepers. The Russian Orloff is a dual-purpose breed that would also make a good breeding project for the poultry keeper interested in conserving endangered breeds.

Despite their stunning beauty, this breed has never soared in popularity. Russian Orloffs made it into America even before their entrance to England, which was in 1899, meaning this breed has been in America for well over a century.

After being imported to the United States from Persia, they were accepted by the American Poultry Association in the 1800s. The breed is no longer included on the list due to lack of popularity. There are several color variations to be found, such as the Black, Black Tailed Red, Cuckoo, Mahogany, Spangled and White.

This is a very calm breed with a good temperament. Russian Orloff hens are not all that likely to go broody. Overall, the Russian Orloff is a friendly breed that is pretty easy to handle.

Russian Orloffs chickens are larger birds, which is why they are raised primarily for meat, as well as being cold hardy with their extra body fat. The average weight of a full grown Russian Orloff hen is approximately 6.5-7 pounds. A rooster weighs in at a slightly larger fully matured weight, about 8-9 pounds.

The main use of the Russian Orloff is meat production, due to their larger full grown size. One of the largest drawbacks to raising this breed for meat is their slow growth rate. As with most breeds that aren’t tailored and bred specifically for meat production, you will find this breed to be a slower bird to mature.

While the primary use for Russian Orloff chickens is meat production, the hens can still produce a fair amount of eggs. Annual production isn’t super high, capping out at about 104 a year. The breed isn’t a record breaker for egg production, but they are worth keeping around.

Like all newly hatched chickens, Russian Orloff chicks will need a good chick starter to get their lives started right. Provide your chicks with this chick starter until about eight weeks, at which point it’s best to supply them with a grower or starter/grower combo.

When they reach 16 weeks of age, it’s time to make the final transition to laying feed so that your hens can lay strong eggs. Provide supplemental calcium such as oyster shells in a separate dish so that your birds can eat it as they need the boost.

Housing chickens is important because they need a safe place to roost out of the clutches of predators, to lay their eggs, and protect them from the elements.

Inside the coop, provide four square feet of floor space per bird, as well as 12 inches of roosting space per bird. One nesting box per every seven hens is a good rule to follow, but a word to the wise: everyone will make one nesting box their favorite and pile into it, leaving several open.

The Russian Orloffs are not especially weak towards any specific health issues. Keep a close eye out for signs that something isn’t right, such as excessive sneezing, lethargy, and lack of appetite. Learn what is normal and learn what to look out for and how to identify threats such as illnesses.

One biggie to look out for in your coop is internal and external parasites. External parasites such as lice and mites need to be removed as soon as they are detected by means of sprays or adding ingredients to their dust bath. Keep an eye out for internal parasites like worms and worm your flock at regular intervals with natural preventatives such as diatomaceous earth, apple cider vinegar, and garlic.

If you are passionate about helping endangered breeds, this is a fantastic bird to work on number boosting. The Russian Orloff chickens lack dedicated breeders, and the bird needs much work to reach a stable status.

Due to their lack of popularity, this breed is increasingly hard to find good breeding stock for. Once you have acquired and probably paid a pretty penny for your birds, selling hatching eggs and chicks can make a decent bit of money.

The Russian Orloff is the only Russian breed found in the United States of America. The breed has been named after one of the biggest supporters and promoters for the breed, Alexey Grigoryevich Orlov.

If you’d like a rare and beautiful bird to be added to your farm, here it is! You’ll surely get asked where such a gorgeous bird came from!