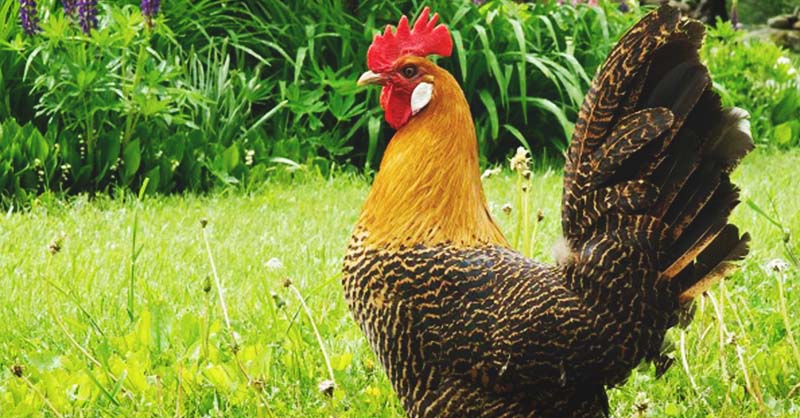 Campine chickens are small, active birds originating from Belgium with a whole lot of pep in their step. These birds are kept mainly for egg production and exhibition and are not an ideal choice for meat chickens.

Campines are a great candidate for free-ranging as they are very wary of their surroundings and are experts at evading the efforts of common predators.

Campines descended from a slightly larger version of the breed, Braekels. Campines and Braekels were intertwined as the same breed until 1904 the breeds were placed under different standards after much controversy.

Following even more controversy, the two breeds were reunited under the same standard around 1925. It was decided that the Campines had eventually died out and the remaining birds were called Brakelhoen.

However, a line of chickens had been imported to England in 1899, and these birds were bred into what we now know as Campines. The breed was imported to America in the early 1900s. Two color varieties have been accepted into the Standard of Perfection with the American Poultry Association – the Gold and the Silver Campines.

Campines are rather small chickens with a skinny appearance. Seldom tipping the scales past six pounds, Campines sport tight fitting feathers, so they look very slim. The average weight of a rooster is about six pounds while a hen weighs about five pounds.

These chickens are not the friendliest birds, but they are rather curious birds that like to get in your business to figure out what you’re up to.

Sporting happy and active dispositions, you aren’t likely to see a lazy Campine.

Campines aren’t the greatest in egg production, but they could be worse. These birds lay around 156 white eggs in a year. Despite their small size, the eggs Campines lay are rather large.

Campines aren’t a great breed if you’re looking for meat production. Due to their small size, processing these chickens wouldn’t yield much meat.

Some good dual purpose breeds to look into for meat production are Jersey Giants or Orpingtons.

While Campines do enjoy their feed, they can get a large part of their rations from free-ranging during growing seasons. If you allow your Campines to free-range, you’ll be able to cut back on your feed bill a decent amount.

When your Campines are chicks, start them off with a good quality chick starter. Around 14-16 weeks of age, transition your young birds to layer feed so they can prepare to produce eggs with the proper nutrition.

Provide supplementary calcium in a separate dish so your hens can eat it as needed to strengthen eggshells.

Although Campines bear confinement, they prefer free-ranging and do best in such an environment. If your birds stay in a run, provide a minimum of 10 square feet per bird.

Within the coop, 3-4 square feet per chicken is ideal to maintain order and make sure everyone has enough space.

Campines are robust and healthy chickens with no known health issues. All chickens are susceptible to common chicken diseases and sicknesses, but Campines don’t have any specific weaknesses.

Keep the living quarters clean and a watchful eye on your flock to catch any health concerns early on.

Campines are rather fun to breed, especially when it comes to crossing the Gold and Silver varieties.

When a Gold Campine rooster is crossed with a Silver Campine hen, the resulting chicks will be sex-linked. Male chicks will have gray on the tops of their heads while female chicks have a reddish tinge to their down.

Fayoumi Chickens actually close relatives to Campines and the Silver Campines very closely resemble Egyptian Fayoumis. Egg and meat production is about the same in Egyptian Fayoumis as Campines, but Campines have slightly friendlier dispositions.

Dorkings are a bit larger than Campines but have the same disposition and egg production. However, their size makes Dorkings a nice dual purpose breed if one is interested in meat production.

Dorkings have a different appearance from Campines, but they are a beautiful breed with much appeal to a nice and quiet backyard flock.

Campine roosters have the rather interesting and unique trait of hen feathering, meaning the roosters don’t have the long and pointed feathers on the neck and saddle like most roosters.

This is a characteristic that set these chickens apart from the Braekel chickens that Campines originally descended from. It is believed that Campines carry the same gene as Sebright chickens, who also have hen feathering.

Campines are a great breed with some incredible characteristics that make them ideal for barnyard life and do well free ranging. Being able to cross the two color variations and create sex-linked chicks is definitely a benefit because you don’t waste your time raising extra roosters.

I think you’ll love this breed and hope you consider adding some to your spring chick order because we all know you’ll have one!