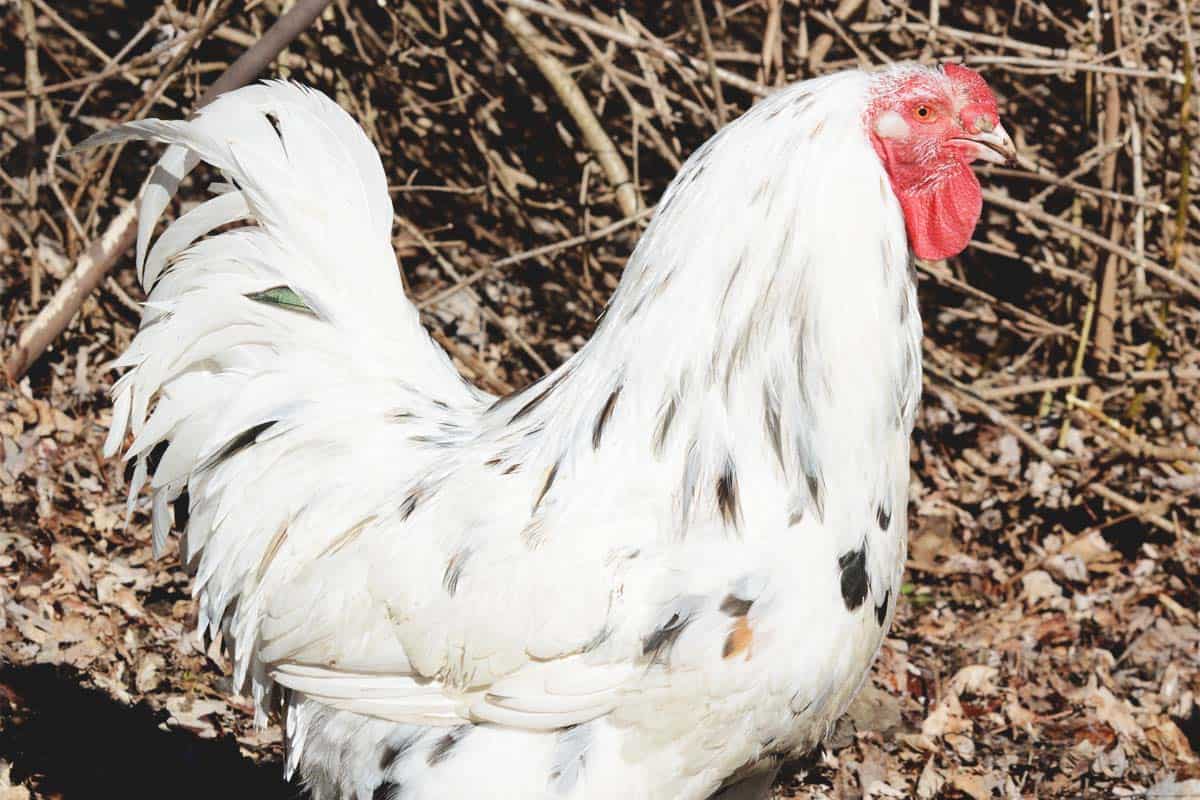 For Chantecler Chickens to have so many positive qualities and characteristics that can’t be found in many other breeds, this breed doesn’t have much popularity.

Chanteclers were bred to be efficient winter layers as well as able to withstand the cold easily. These attributes make the Chantecler an exceptional choice for those in colder climates.

Chanteclers were the first breed to originate from Canada, making them a unique chicken to have around. Ideas for breeding a Canadian chicken came to Brother Wilfred Chatelain, who ended up supervising the breeding process in the following years.

The breeding process for Chanteclers was slow and deliberate, involving several breeds and ten years of work before their introduction to the public. Dark Cornishes, Rhode Island Reds, White Leghorns, and White Wyandottes went into the making of the first White Chantecler.

Since Chanteclers are a dual-purpose breed, they are a larger chicken to make a decent meat producer. Roosters generally weigh in somewhere around 9 pounds when fully grown. Hens are naturally a bit smaller, tipping the scales around 7 pounds at full-grown weight.

One important characteristic of Brother Wilfred Chatelain was a calm and peaceful temperament. As one of the gentlest breeds out there, this chicken certainly lives up to his standards. In addition to their friendly dispositions, hens can make excellent and nurturing mothers.

Despite having a tendency to go broody, Chantecler hens can still produce an impressive amount of eggs every year. A single Chantecler hen can lay over 200 eggs per year.

Due to being bred to withstand harsh winters, this is also a breed that can be counted on to keep laying eggs when other hens stop laying because of cold weather.

While there are dual-purpose breeds out there that may produce a bit more meat, the Chantecler is definitely a well-rounded breed. It’s been reported that fully grown Chanteclers can consistently produce 5lb carcasses.

White Chanteclers are the best color variation to raise for meat due to having white pinfeathers. White pinfeathers leave a dressed carcass looking clean and neat.

If you’re starting off with chicks, you’ll need to acquire a good quality chick starter to feed them for the first several weeks of life. Around 12-14 weeks of age, you can transition your growing birds to a good laying feed.

Occasionally there will be cases when your laying hens will not receive enough calcium and result in laying soft-shelled eggs.

If this happens, provide calcium supplements such as crushed up eggshells or oyster shells to give your hens a nutrient boost. Read more about soft-egg issues and how to resolve it.

Chanteclers can be content both in confinement and free-ranging. If you choose to free-range your birds, Partridge Chanteclers may be a better color variety to own due to the fact they camouflage better against the landscape than a white bird.

The Chantecler certainly hits the mark for a robust and hardy bird! When the breed was being created, special care was put towards making sure that the resulting chicken would be strong and healthy.

Since Chanteclers are such a good breed for meat and egg production, many sustainable farmers like to raise their own chickens instead of buying repeatedly when they need new stock. Chantecler hens make it easy to breed for the next generation because of their aptitude to set and raise chicks.

For those after cold hardy, dual-purpose chickens, the Wyandottes are another viable option. Wyandottes might not have egg production quite as high as Chanteclers, but Wyandottes offer more meat to compensate.

Another thing that makes Wyandottes favorable is their gorgeous feather patterns that add beauty to every farm.

1. The Chantecler is the only breed to have been developed by a member of a monastic order.

2. ‘Chanter’ means “to sing” and ‘clair’ means “bright” in French. Put together, the breed’s name means ‘To sing brightly.’

3. There’s actually a third color variation of the Chantecler that hasn’t been recognized by the American Poultry Association yet. The Buff Chantecler has been around since the 1950s.

This is such a useful breed, it’s a wonder it doesn’t have more popularity than it actually does. If you’re a sustainable farmer or homesteader needing a chicken that can keep well in the cold, this breed is the perfect match for you and your farm!