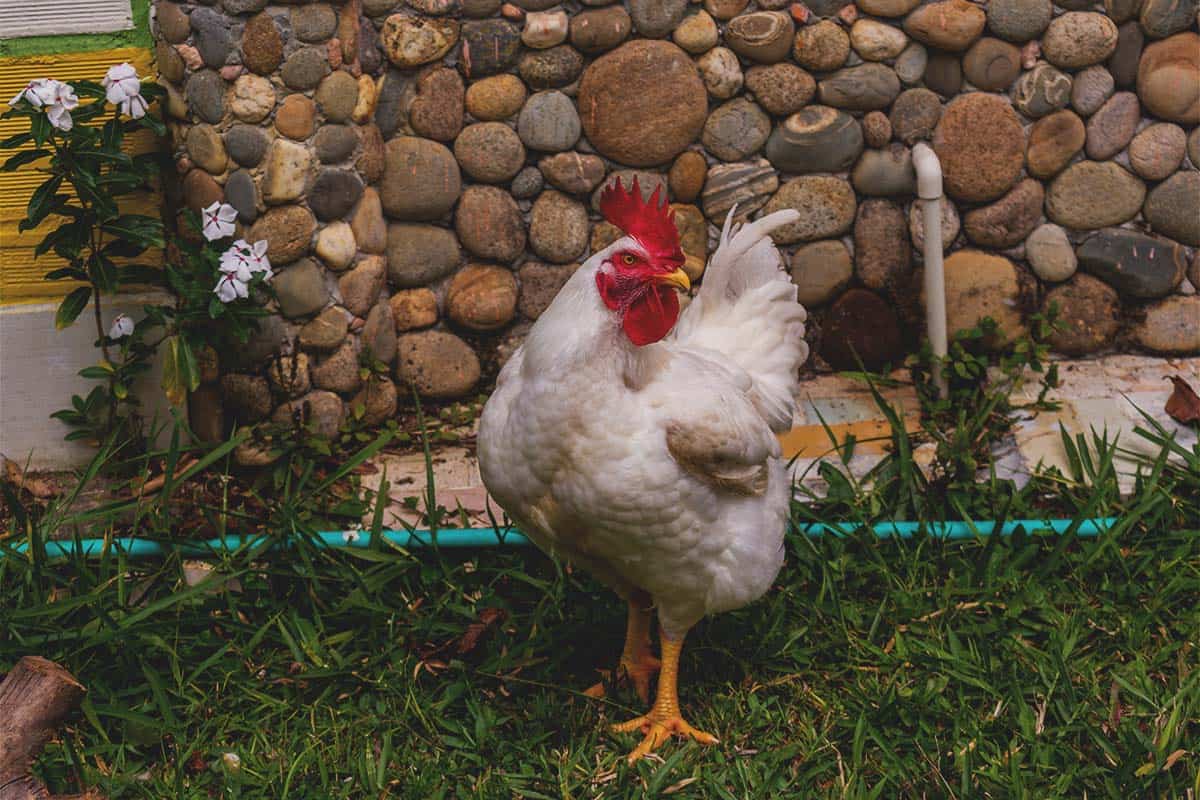 If you’ve ever bought a chicken from the grocery store, chances are it was a Cornish Cross. The meat industry is quite fond of this breed for its rapid growth and food to meat conversion.

As you may have deduced from the name, these chickens are hybrids, and therefore do not breed true. The exact combination of breeds that go into Cornish Crosses is unknown by everyone except a small group of breeders.

However, we do know that both White Rocks and Cornish chickens have a significant role in the final hybrid that we know as Cornish Crosses.

Cornish Crosses are rather docile chickens with very little interest in anything other than food and water. If you’re used to your usual, active and perky chickens, Cornish Crosses will be a bit of a surprise.

Cornish Crosses tend to get big so quickly that they don’t really have the vigor to spend time moving around much, so they’ll often lie around all day.

This is definitely not a chicken you’ll be interested in raising for egg production. Cornish Crosses can have significant health issues when they get past 8-10 weeks of age due to rapid growth.

Some people have managed to keep Cornish Cross hens past their slaughter date and even gotten them to lay eggs. However, the mortality rate is high and this definitely isn’t a breed that anyone would recommend for egg production.

Naturally, Cornish Crosses are excellent meat producers. From meat quantity to ease of processing, these birds are bred for all of it! Cornish Crosses have significantly fewer feathers than most chickens, which makes them much easier to pluck when it comes to processing time.

Have you ever wondered what breed those little game hen sized carcasses are that you can buy at the grocery store? Those petite little chickens are actually Cornish Crosses, just processed earlier than the standard 8 weeks. Cornish Game hens are actually both roosters and hens.

These little birds are generally processed around 5-6 weeks of age, weighing little more than 2 pounds when fully dressed out.

Feeding Cornish Crosses is a bit more simple and straightforward than it is with laying hens. Due to incredibly rapid growth throughout their entire lives, you’ll need to start them out on a high protein feed, otherwise known as broiler or meat bird feed. Your chickens will remain on this feed for their whole lives, which means no feed transitions like you would have with layers.

In order to prevent Cornish Crosses from growing too rapidly in the final week of their life, farmers will take care to regulate feed intake. It’s a good idea to provide food for 12 hours on and 12 hours off so your birds don’t overeat. Always provide water at all times.

When it comes time to process your chickens, you’ll want to remove food 12 hours before processing to make the evisceration process cleaner.

Housing broilers can be approached in several different ways depending on your space and how you want to run your operation. Cornish Crosses do very well in chicken tractors that can be moved 1-2 times per day. You can let your birds out into a run, but they aren’t always great at returning to their coop at night time.

It’s definitely a good idea to avoid any kind of raised coop or roosts because these large chickens won’t do well attempting to climb and could hurt themselves.

The biggest health issues you’ll encounter with Cornish Crosses are generally due to their accelerated growth. It’s not at all uncommon for Cornish Crosses to deal with heart issues and leg problems because they can’t support the sizes of their bodies.

There is nothing that can be done about weight induced health issues other than making sure that your birds don’t go past their ideal processing date and restricting feed as recommended in the final week of life.

When too much effort is put into one single breed attribute, other characteristics will fall to the wayside and Cornish Crosses are an excellent example of this. Despite their health issues, this breed is still widely loved for its meat production qualities.

If you love the idea of a heavy, fast-growing meat breed but want a chicken with a bit more vigor and vitality, Freedom Rangers are your broiler.

Freedom Rangers will take a few more weeks to reach a good processing weight, but they are worth the wait. This breed takes interest in foraging like a normal chicken as well as interacting with each other.

Freedom Rangers are still rapid growers, but they aren’t quite as commercialized as Cornish Crosses.

Not everyone wants a chicken breed as commercialized as the Cornish Cross. Many homesteaders are interested in heritage chickens that grow at a slower and healthier rate. However, Cornish Cross chickens definitely have a place on many farms and they perform their jobs well.