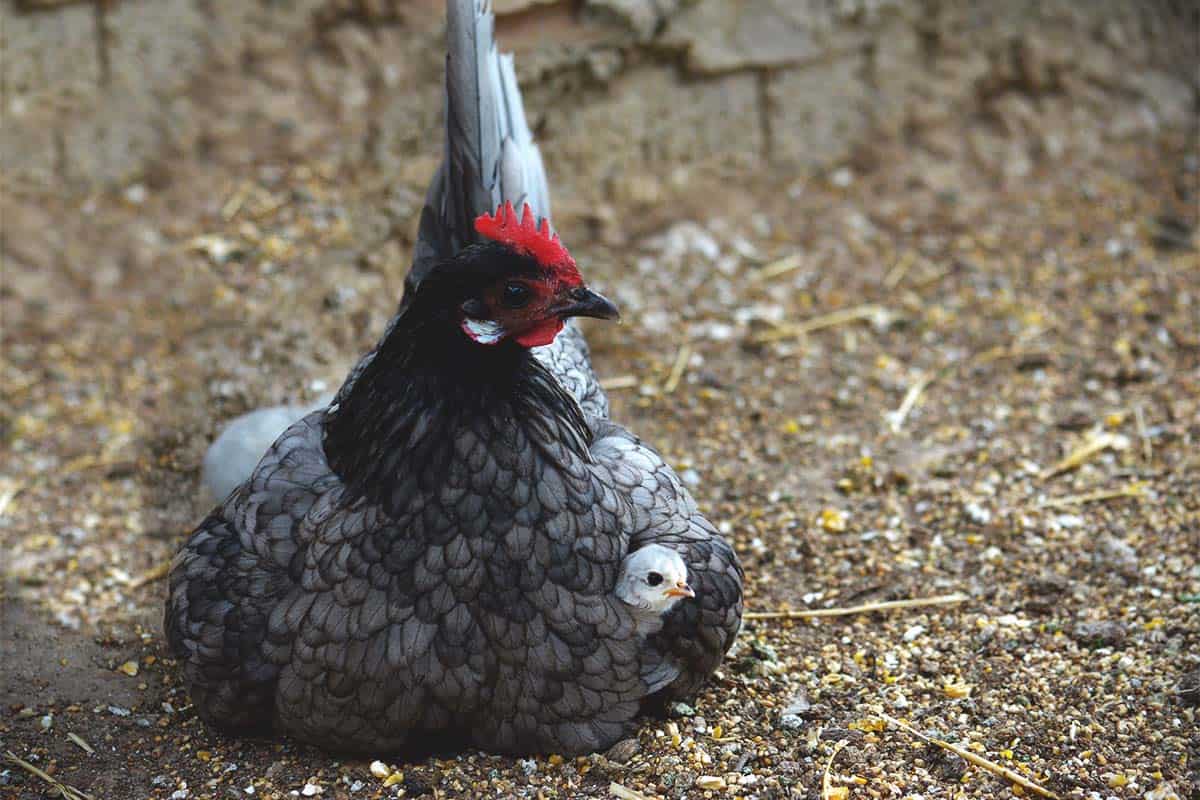 Don’t be surprised if you’ve never heard of this breed, Andalusian Chickens are certainly a lesser-known chicken. However, this is a beautiful and productive chicken breed.

For those in warmer climates, Andalusians are a perfect fit for homesteaders after a heat-tolerant egg layer. The deep and vibrant blue plumage that Andalusians proudly sport makes them stand out in a crowd.

In the early 1850s, Andalusians came to America from England. Andalusians were recognized by the American Poultry Association in 1874.

Andalusians are smaller than many Mediterranean chickens. Andalusian roosters weigh about 7 pounds when fully grown. Hens are naturally a bit smaller, weighing around 5.5 pounds at full-grown weight.

The Andalusian is a very active breed with very little interest in sitting still for any amount of time. As far as interacting with their caretakers go, this breed is curious, but not overly friendly with people. You’ll always see these birds on the move, but they might go out of their way to say hello to you if you’ve got a treat for them.

Due to their love for always being on the move, Andalusians are very rarely inclined to go broody and hatch their own chicks. An incubator will definitely be in order if you’re interested in breeding your own Andalusians.

One thing that people love Andalusians for is their winter production. You can rely on Andalusian for fair production of medium-sized, chalk-white eggs year-round! On average, a single hen can produce 165 eggs in one year.

Now, if you’re looking for a meat bird, the Andalusian isn’t going to fit the bill. Andalusians are small and wiry, which makes them very undesirable for any type of meat production.

For those starting out raising Andalusians with chicks, you’ll want to supply them with a good quality chick starter for the first several weeks. Your growing birds will be ready to be switched to laying feed to prepare for egg-laying around 10-12 weeks old. Once you’ve switched to laying feed, your chickens will be able to stay on this feed year-round.

Sometimes laying feed won’t provide quite enough calcium and your hens may end up with soft-shelled eggs. Oftentimes, a calcium supplement such as crushed oyster shells or eggshells can be fed in a separate dish to solve this problem.

Andalusians will do best in an environment where they have plenty of room to range. If you don’t have a decent bit of space, this might not be the ideal chicken for you. Inside the chicken coop, you’ll want to provide a minimum of 3-4 square feet per chicken.

This breed will thrive in warmer climates, making them an excellent pick for those living with year-round warmth or just exceptionally hot summers. Due to their large combs, Andalusians can be affected by frostbite if you do have cold winters.

Read our post on how to prepare your chicken coop for the winter.

As always, keep an attentive eye on your flock as an imperative to catch any potential health issues. Runny eyes or nose, lethargy, and lack of appetite are all signs that something bigger could be going on.

We also have an interesting post on chicken noises, and end it off with the sound of a chicken in distress.

Mites, lice, and worms are all frustrating parasites that also need to be handled immediately upon discovery. Drinking water treatments can generally be used for treating internal parasites.

External parasites often need to be treated with dust or spray, which can be far more labor-intensive when dealing with larger flocks.

Working with the blue gene in poultry is always fun and interesting. The blue gene in chickens is unstable, which means that many different color variations can be produced depending on the parent pairing. Blue, splash, and black chickens can all be produced with variations of breeding blue birds, as shown below.

Knowing the possible outcomes when breeding blue chickens is imperative to making sure you hatch the coloration you are after. Andalusians can have the tendency of ending up with a dull blue color after a few generations if the vibrant blue coloration isn’t upheld during breeding.

Breeding with black offspring occasionally will help to keep the blue an ideal color.

The Ancona chicken makes an excellent alternative to Andalusians if you’re after a Mediterranean chicken with a different flair. Anconas have significantly better egg production than Andalusians, producing over 200 eggs in a year. This chicken is also a major head-turner, sporting gorgeous speckles all over their plumage.

Due to extremely fast maturity in this breed, you may find your cockerels crowing as early as 7 weeks of age. Listening to new birds learn how to crow has to be one of the most comical sounds in the barnyard!

We have a delightful example in our chicken noises and sounds article!

Andalusians are superb choices for chicken keepers that live in hotter climates and want a dependable bird even in the summer. You’ll definitely want to consider this chicken if you’re one of these farmers!