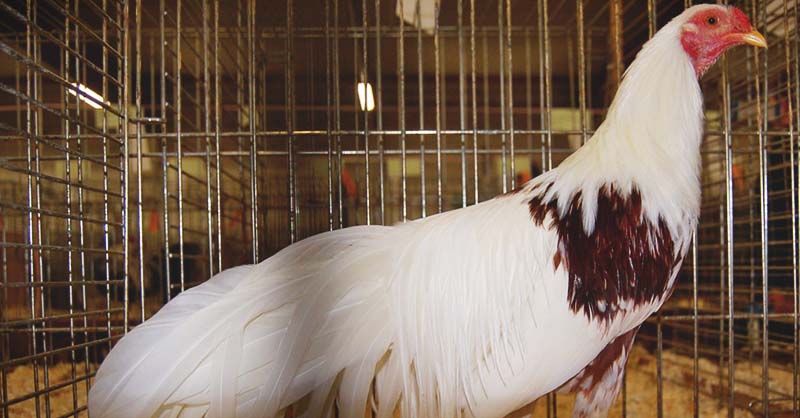 Yokohama chickens are probably unlike any other chicken you’ve ever raised before! These exotic birds were originally bred for exhibition and this is still their main purpose today.

One of the main distinguishing characteristics for is their long and flowy tails, especially on the roosters of this breed. While they wouldn’t be the main constituents of a laying or meat flock, a few Yokohamas add an element of elegance to any coop.

The Yokohama chicken was bred in Germany during the 18th century using stock imported from Japan. Distinguishing characteristics of Yokohama include their long saddle feathers and walnut combs.

Breeders worked to refine Yokohama characteristics and a breeders club was formed in 1904. In 1981, the Red Saddled and White Yokohama varieties were added to the American Standard of Perfection.

Yokohamas are rather small and petite chickens. A full-grown Yokohama rooster weighs around 4.5 pounds. Hens are naturally a bit smaller, weighing approximately 3.5 pounds.

Due to their long tail, Yokohamas can appear to be somewhat larger than they really are, but they are tiny chickens.

Although most chickens resembling game birds don’t typically have very calm dispositions, the Yokohama is an exception. Yokohamas are generally very calm and docile birds with friendly personalities. Many chicken keepers have also observed their Yokohamas as especially quiet birds amongst the flock.

Due to their small size, you wouldn’t want to use a Yokohama for meat production. It just wouldn’t yield much meat! If you’re interested in a small roaster similar to a rotisserie chicken, rather look into Cornish Game Hens.

It is a good idea to provide your Yokohama extra protein as part of their daily diet.

Protein is important for maintaining healthy feathers and Yokohama chickens have a few more feathers than most chickens do when it comes to their tails.

There specially formulated game bird feeds with complete nutrition for chickens like Yokohama. If you have your flock on a standard laying feed, give your birds protein enriched treats such as mealworms and scrambled eggs.

Because the Yokohama is particularly small, they do not require a lot of space in the chicken coop. It is recommended to provide roosters with a bit more space than hens due to the size of a rooster’s tail.

Many chicken keepers raising birds such as Yokohamas for exhibition purposes choose to house their birds in wire cages. These cages are generally raised off the ground and have wire bottoms to allow droppings to fall through.

While this isn’t a chicken’s ideal living environment, it will keep your birds clean for the weeks leading up to a show. During seasons when there isn’t an upcoming show, it’s healthy and better to let your birds into a coop and run so they can get dirty and be chickens.

Unfortunately, Yokohamas have the reputation to be weak as chicks, especially when purchased from a hatchery. Many chicken keepers have purchased these birds only to be disappointed when a large number perish in shipping or shortly after arrival.

Larger scale hatcheries are less likely to breed selectively for hardiness and vigor in birds, so if you want higher quality and healthy birds it is best to purchase from a private breeder.

Aside from the issue with hatchery stock chicks, Yokohama are fairly healthy birds. Maintain a healthy flock by keeping a close eye on potential health issues, providing good quality food and keeping the coop clean.

Due to the issues with inbred chickens as mentioned above, breeding Yokohama chickens can be a challenge. Here are some tips for breeding the healthiest birds possible:

Sumatras are very similar to Yokohamas, but their tails are even longer! These birds are stunning jet black or blue and roosters can grow tails up to 5 feet long. Meat production is generally about the same in Sumatras as Yokohamas, but Sumatras have slightly better egg production.

Phoenix and Yokohama chickens are often misconceived as the same breed, but they do have their own unique breed distinctions.

This breed has a different comb type, as well as having slightly more diverse color variations than Yokohama. Meat and egg production is about the same in Phoenix as it would be in .

Generally, an average Yokohama rooster tail is 3-4 feet in length. However, back in Japan and Germany where these birds are from, some people say they have grown chickens with tails up to 27 feet long. Sound a bit far fetched? Perhaps, but I’d say there’s definitely some birds with exceptionally long tails over there.

Despite the challenges that may be presented in raising Yokohama, they are super fun to raise and a joy to see on your lawn. For a breeder looking for a fun project, Yokohama chickens are right up your alley! Always a fun choice for showing, these birds are versatile and to have around. Happy chickening!