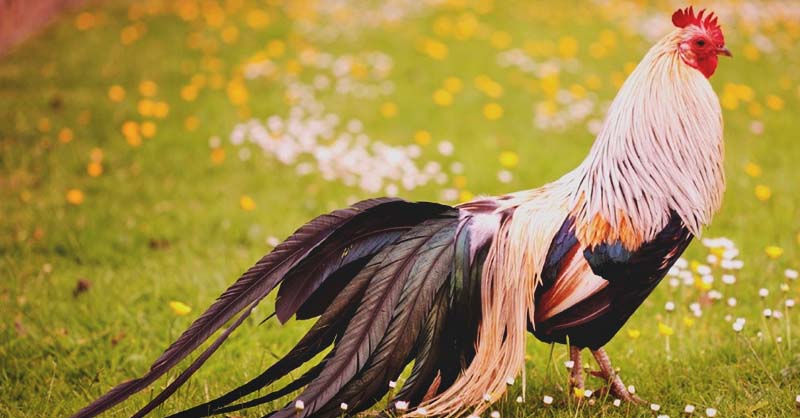 Phoenix Chickens are rather unique which you won’t see every day. Characterized by the long and flowy tail, this is a fun and ornamental breed. A Phoenix rooster would certainly catch the eye of anyone that wants a little something different. For the exhibition enthusiast, this is a fun challenge that would be a joy to show.

About the Phoenix Chicken

Although this chicken looks like it’s straight out of Japan, it was actually bred in Germany using birds imported from Japan. Hugo du Roi, the first president of the National Germany Association is responsible for the creation of this breed. Leghorn, Malay, Modern Game, Old English Game, and Yokohama breeding stock along with other rare breeds were used in the development of this chicken breed.

The Silver Phoenix was the first variety to be accepted into the American Poultry Association, in 1965. In 1983, the Gold Phoenix was accepted, with the Black Breasted Red following most recently.

As is true to their game bird heritage, these are not large chickens, despite their giant tail. Average grown weight of a Phoenix rooster is 5.5 pounds. Phoenix hens weigh in around 4 pounds.

Just like the birds used in their breeding program, the Phoenix aren’t overly friendly. This breed prefers to be standoffish and flighty. However, they do make good mothers. Due to their game bird background, roosters can be aggressive, so be sure to keep your hen to rooster ratios healthy.

Exhibition is the primary use for these birds. They are certainly some big-time eye-catchers. A lot of work goes into maintaining the glory of the showy tails so they are show ready. It’s also good to heavily socialize your birds from an early age so they are handleable.

Egg production from the Phoenix is by no means optimal. They are fair producers of small white eggs.

Since the full-grown weight of a rooster is only 5.5 pounds, you can probably guess that meat production is not ideal. You might be interested in some dual-purpose breeds for better meat and egg production because you won’t find that in the Phoenix.

Due to their showy plumage, it’s a good idea to give Phoenix chickens extra protein to keep those pretty tails on point. Especially juvenile birds will need good boosts of protein to keep up with their growing tails.

There are game bird feeds that work well for supplying necessary protein, but if you have laying hens, they will need calcium supplements for their egg-laying.

If you’re looking for good treats to supplement protein, there’s a lot to choose from. Scrambled eggs (yes, your hens will love it!), pumpkin seeds (raw and unsalted are the best), peas and oats are some good things to try.

You can crush up your used eggshells and feed them back to your hens for a healthy and free source of calcium, or buy oyster shell to supplement.

Although this is a small bird, it’s best to provide the same amount of space as you would for a large chicken, because they have some hefty tails. It’s a good idea to provide four square feet per bird in the coop. Make sure that the roosts are high so their tails can hang down without sitting in the dirty bedding all night.

This chicken can fly very well, so if you choose to keep them in a run, it probably needs to be covered. 10+ square feet per bird in the run is a good size to start with. If you choose to let your birds free-range, the Phoenix is a great candidate for free-ranging.

Other than maintaining healthy feathers, which we talked about earlier, this is a pretty healthy chicken. Keep a clean environment for them to live in and a close eye on flock behavior to catch any issues early on.

This is certainly a fun bird to play around with breeding and genetics. You have quite a few gorgeous colors to choose from when breeding. The Phoenix is also a breed on the watch list according to the Livestock Conservancy, so a breeding project would help raise the overall numbers.

Yokohamas are another breed that sports the gorgeous and long tail similar to the Phoenix. A Yokohama is a bit smaller than the Phoenix, but egg and meat production is about the same.

Sumatras are an equally stunning chicken, with tails that can grow to be even larger than a Phoenix. As with the Yokohama and Phoenix, meat and egg production is nothing to write home about because these are primarily ornamental chickens.

Phoenix chickens are able to grow such large tails because they generally only molt every other year instead of once a year. The sickle feathers alone can grow to be 2-5 feet in length.

What an adventurous chicken! Do you think it’s a fit for your chicken operation? It’s certainly not for everyone, but it can certainly make a good addition to a flock equipped for such a beautiful bird. Because, who doesn’t want the chicken version of a peacock?

Phoenix Chickens are bred for exhibition and is characterized by a long and flowy tail. It is a fun and ornamental breed beautiful to have around.