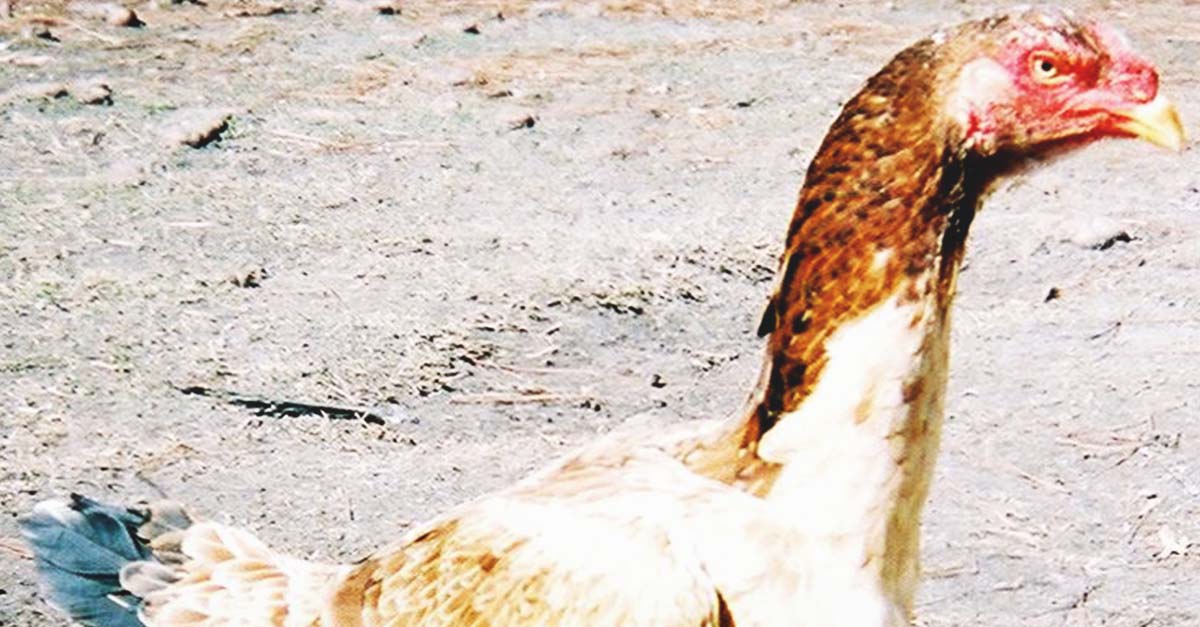 This bird will leave a lasting impression after you’ve seen it once! Malay Chickens are well known for being the tallest chicken in the world, and they take their job seriously. Malays were originally a game bird and are now mainly an ornamental bird seen mainly in shows and at the farms of avid poultry exhibitors.

The Malay has certainly been around for a while, and is thought of as one of the ancient landrace chickens. In addition to their height, this chicken is lean with a stout beak and thick legs, giving this chicken a very unique look about them.

As far as size goes, we all know that Malays are not small chickens. Standing proudly at 26-30 inches, these birds easily intimidate small dogs. Malay hens weigh about 7 pounds, while roosters tip the scales at approximately 9 pounds.

This chicken is not the bird you would choose if looking for a sweet and docile variety that will cuddle up with you; then Malays aren’t for you. Malays have a tendency to be aggressive towards their owners and flockmates. These chickens can be managed, but they need plenty of space and assertive owners.

Egg production from this breed isn’t optimal, but it could be worse. You can expect an average of 120 eggs from a single hen annually.

While this is a large chicken, it is not ideal for meat production. Malays are incredibly lean birds that don’t put a ton of weight on in any one spot. Breast meat is especially lean and the meat, in general, tends to be coarse and dry.

There are specially formulated diets for chickens like the Malays. You can purchase game bird feeds at most feed stores and it’s a more complete diet for game birds than laying feed.

Chicks will need to be started on a good quality chick starter and transferred to the game bird feed around 14-16 weeks of age.

If you have hens that are laying eggs, supplement them with calcium such as crushed up eggshells or oyster shells.

This is a breed that absolutely can not tolerate confinement if at all possible. With their tendencies to pick on and bully each other, confinement can cause boredom and lead to cannibalism.

Of course, your birds will need a coop to stay protected from the elements and predators, especially at night. Provide a minimum of 4 square feet per bird in the coop and more space if you can swing it.

Malay chicks do have a reputation for having a hard time thriving as young birds under 4 weeks of age, so they will require especially attentive care. Once your birds get older, there’s no stopping them! Adult Malays are incredibly hardy and you’ll have a hard time keeping these robust birds down for long.

Internal and external parasites can pose as a problem in any flock and Malays are no exception. Educate yourself on the signs of these pests and get rid of them as quickly as possible so your flock doesn’t skip a beat.

Attentive and watchful eyes on your flock to catch any birds that are acting less than 100% will go a long way in catching and preventing disease spread.

Since Malay hens aren’t exactly champion layers, it can be difficult to get a decent clutch of eggs gathered to hatch with just a couple of hens. Breeding flocks for Malays may be a bit larger than some breeding flocks to make sure enough eggs are laid during hatching season.

Malay hens make very good mothers, but they can’t cover as many eggs as you might expect from large chickens, due to their lack of fluff and feathers. If you do allow your hens to raise their own young, make sure they stay away from roosters, which can be aggressive and territorial to the fragile new lives.

Modern Game Chickens are partially derived from Malays, but toned down in terms of temper and aggression. These chickens are a much more friendly and personable chicken to have in your yard. Modern Game birds come in both bantam and standard versions, sporting the lean and leggy appearances in both sizes.

It’s hard to trace back to the exact origins of the Malay, but as far as we can tell, it’s possible that Malays were around up to 3,500 years ago! Talk about some dinosaur chickens!

These birds will add fun to any showing competition and add some height to your flock of chickens. Although Malays require special conditions, these birds are definitely a great opportunity to broaden your experience and knowledge in chicken keeping.