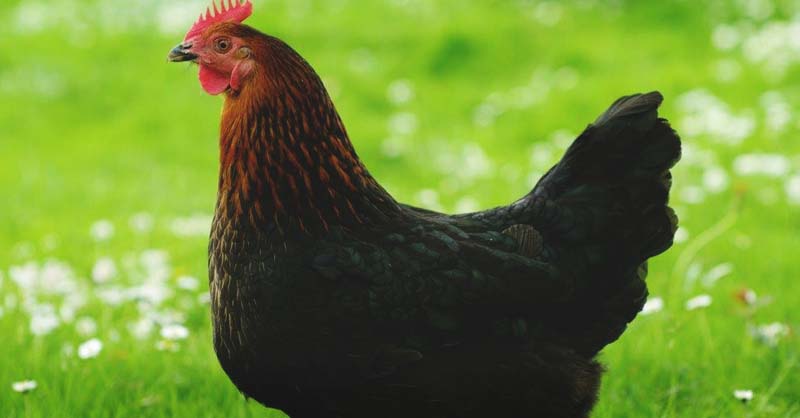 Red and black sex-link chickens are some of the most popular hybrid chickens around and seem to be rapidly finding their homes in many chicken coops.

Well known for their quick growth and high production rate of large brown eggs, these are undoubtedly well-loved chickens. During the springtime, you can probably find some sex-links in just about any feed store selling chicks due to their widespread popularity.

About Red and Black Sex-Link Chickens

First and foremost: Sex-links are not an officially accepted breed by the American Poultry Association and never will be. Sex-links are hybrid chickens and are not usually bred past their first generation.

We will learn more about how sex-links are bred later in this article. Despite the fact they are not a breed of chicken, sex-links are an incredibly popular pick for many chicken keepers and it’s no secret why!

The weight of both red and black sex-links is about the same, and the two are rather large chickens.

The average weight of a hen is 6-7 pounds while roosters weigh around 8-9 pounds. Sometimes red sex-links will be a bit larger in comparison to black sex-links, but they are pretty much the same.

Both the red and black sex-links are known for being very active chickens, with moderately docile personalities.

These chickens are not known for aggression and can do well in smaller flocks with more human interaction.

Egg production – the reason these birds have gained so much in popularity. You won’t find many breeds that lay better than a red or black sex-link.

Generally, these chickens lay between 250-300 large, brown eggs per year! That’s a whole lot of delicious and farm fresh eggs.

The parent stock of most red and black sex-links are dual-purpose breeds, so these birds can produce a nice amount of meat. If you’re after an even better dual-purpose breed, you may be more interested in an Orpington or Jersey Giant.

Sex-links are not especially needy when it comes to what they eat. If you are starting with sex-link chicks, you’ll want to put them on a good quality chick starter until 6-8 weeks of age.

Somewhere between six and eight weeks of age, transfer your birds to a starter/grower if you weren’t already feeding your chicks a starter/grower combo. Around 16 weeks, it’s time to put your young adults on layer feed to make sure they get the nutrients they need for egg production.

It’s a good idea to supply your birds with supplemental calcium in a separate dish — this way your hens can build strong eggshells.

Sex-links can do well in a run and aren’t as likely to fly out due to their more substantial size. Alternatively, these birds also enjoy free ranging and can do well in such an environment if allowed to do so.

Your sex-links should be robust and healthy for the first three years of life, omitting the possibility of internal and external parasites such as mites, lice, and worms.

Since sex-links lay at such a rapid rate, they generally slow down significantly between two and three years of age and can deal with reproductive health issues.

Generally, a hen will die by five years of age due to issues such as reproductive tumors or egg yolk peritonitis.

Breeding sex-links can be a bit complicated and confusing at times. A sex-linked chicken is any chicken that is a result of two birds of different breeds being crossed to create a chick that is sexable by the color of the down.

Sex-linking is not a quality that can be carried through generations. A sex-linked chick is always going to be a first generation hybrid cross.

When it comes to the different types of sex-links, the possibilities are numerous. A red sex-link is created by crossing a rooster carrying a red gene with a hen carrying a silver gene. The resulting female chicks will be reddish, while males will be mainly white.

For black sex-linked chickens, a New Hampshire Red or Rhode Island Red rooster is crossed with a Barred Rock hen. The resulting chick will be black, and males will have have a large white spot on the top of their head.

Black sex-links bear a strong resemblance to Black Copper Marans, but there are some distinguishing characteristics. Marans do not have copper on their chests, and also carry feathers on their legs, unlike sex-links.

I know this is a lot of information and it can seem a bit confusing! Don’t worry, take it one step at a time and do more research on how to breed these chickens if you’re interested in doing so.

Barred Rocks are used in the breeding of black sex-links and make a fantastic alternative to the black sex-link. These birds have just as good meat and egg production as sex-links with an even friendlier personality!

The biggest drawback to Barred Rocks is the inability to sex them based on down color when they are freshly hatched.

Once again, a chicken used in the breeding of sex-links. Rhode Island Reds were initially bred as a dual-purpose breed for meat and eggs, so they do a great job fitting this bill.

These chickens were one of the leading breeds in egg production before sex-links took over, but Rhode Island Reds are still high on the ladder of popular breeds.

Sex-links sound pretty neat, huh? It’s so convenient to be able to sex our day old chicks without having to learn the vent sexing technique because that’s pretty tricky! On top of that, these chickens have spectacular egg production! What’s not to love? You’ll definitely enjoy the addition of these birds to your flock.