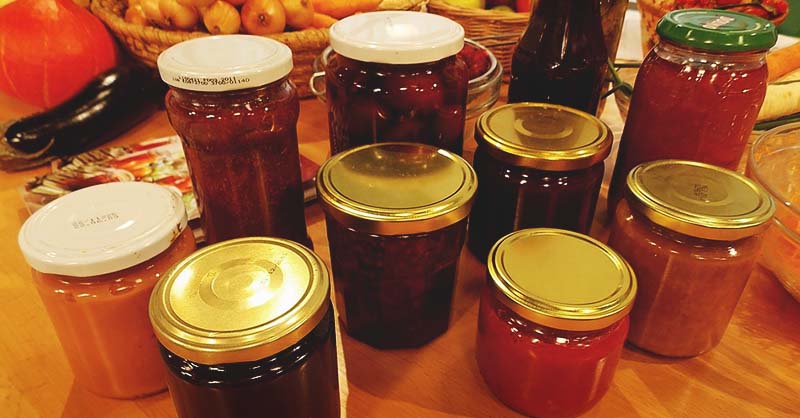 How would you go about oven canning? What items should you oven can and which shouldn’t you?

If you’ve been in the dark about oven canning and would like some insight, you’ve come to the right place. I’m going to walk you through the basics of oven canning.

Hopefully, this can help you decide which side of the fence you’ll land on with this hot topic:

Spoiler Alert: We don’t recommend oven canning. This article is for informational purposes only. If you decide to proceed with oven canning, you do so at your own risk. We are not responsible for any experiences, illnesses, or injuries you may incur.

What is Oven Canning? 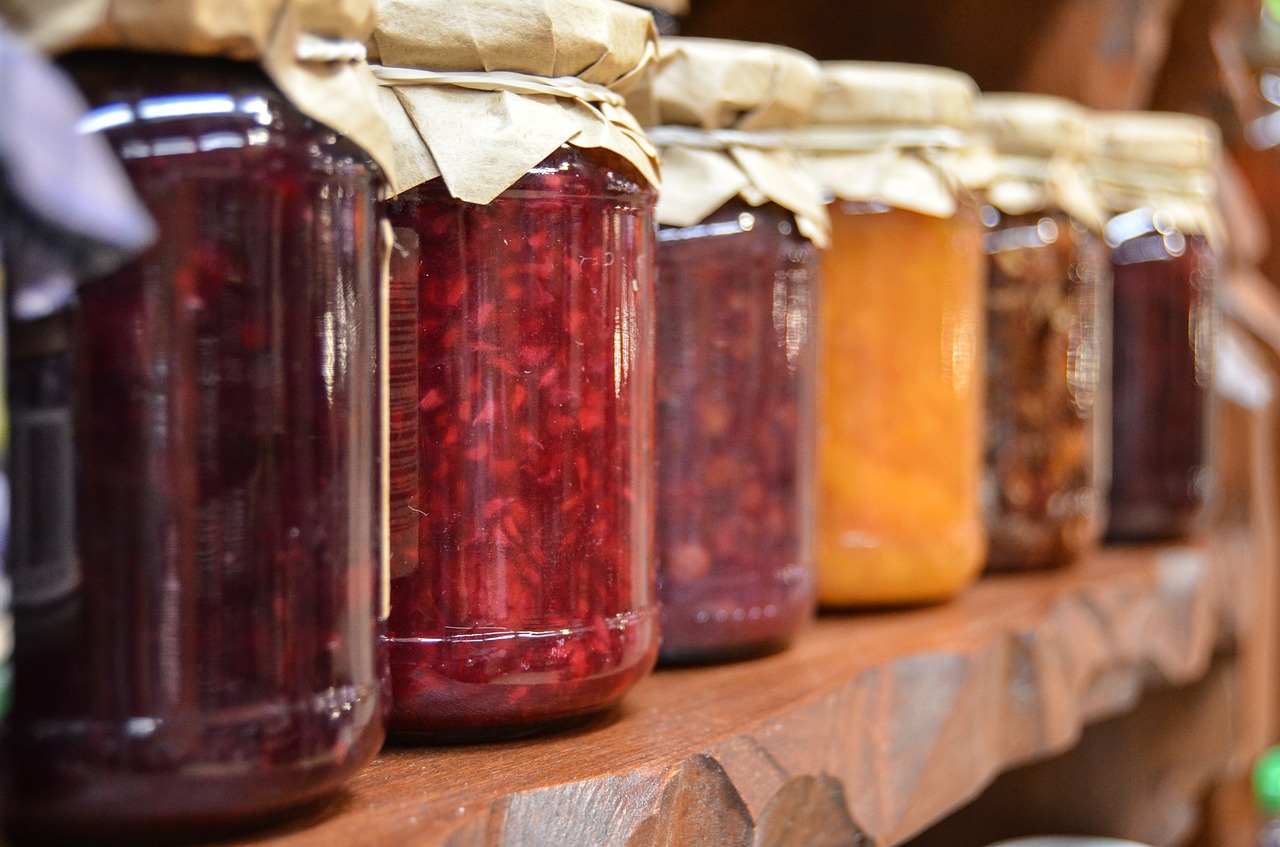 The first time I heard of oven canning was approximately five years ago. For a while, many cooking and homesteading sites were interested in sharing this new way of canning.

In reality, oven canning has been around since approximately 1920, but it made a huge comeback with people who were looking for an easier way to preserve food and with preppers who needed to preserve dry goods for longer times.

If you haven’t been formally introduced to oven canning, it’s the process of filling mason jars with cooked foods. The jars are placed in an oven and baked between 200-250°F for an hour or more.

It is an alternative to water bath canning and pressure canning as well. Before you jump on the bandwagon, there’s important information you should know.

The Options You Should Consider 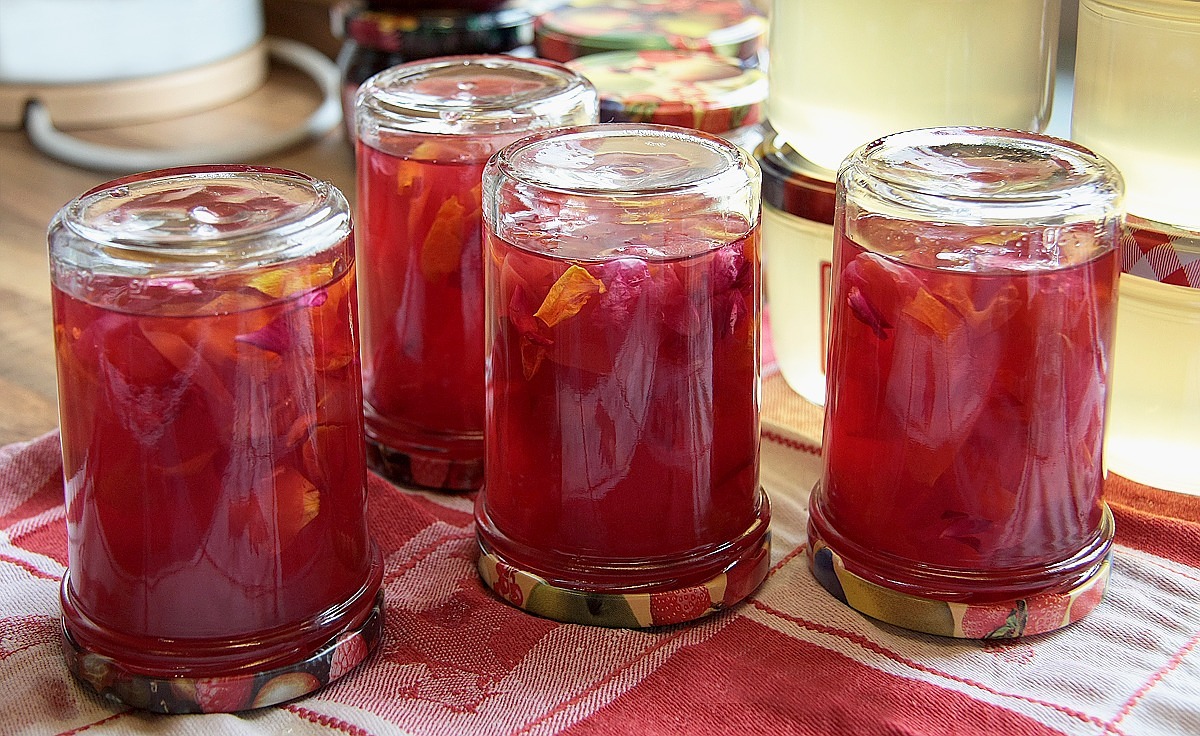 As I mentioned above, we don’t stand behind oven canning. We aren’t alone. The National Center for Home Food Preservation and the USDA Complete Guide to Home Canning don’t recommend using this method of canning either. Here’s why:

1. Heat is a Concern

The main reason most don’t support this type of canning is the temperature. When placing canned goods in the oven, the food doesn’t get hot enough to kill bacteria and mold spores. This leaves room for botulism to form – one of the most significant concerns of home canning.

When you cook a pot roast in the oven at 225°F, you must cook the roast for approximately 25 minutes per pound. As the time winds down, you insert the meat thermometer to make sure it’s done, and the roast will reach only 175°F when done.

This same theory works for oven canning. Though your oven is set for anywhere from 200-250°F, it doesn’t mean the food inside the jar will reach the same temperature.

There’s no guarantee the food will get hot enough for a long or consistent enough period to feel confident all bacteria or mold spores have been killed.

When canning using the water bath canning method or pressure canning method, the food inside the jars get hot enough to kill mold and bacteria spores.

The reason is simply that these methods use moist heat instead of dry heat. Air isn’t a good conductor of heat. Which is why it isn’t effective at heating food in the oven thoroughly enough for it to be deemed safe across the board.

However, when canning with water, the heat is moist heat. It ensures the temperature in the canner reach greater heights.

Because there’s no pressure in the oven, even if you’re able to get the food inside the jar to boil it won’t get hotter than 212°F, not hot enough to declare the food safe.

Another safety concern of oven canning is the jars breaking in the oven. When jars are placed in the oven under higher temperatures, they may explode.

Not only can it harm you, it can also destroy your oven. If you haven’t been in the kitchen when a glass jar exploded under pressure, consider yourself lucky.

Glass jars have a way of shooting shards of glass many feet into the air and outward as well. Shards could easily harm those nearby and cause damage to the eyes, especially.

The last point as to why you may want to skip oven canning all together is it’s ineffective. The whole idea of canning foods is to preserve them for later use.

Most people who oven can, do it with the purpose of storing dry goods. The only problem with this scenario is the shelf-life of dry products becomes shorter under higher heat.

Therefore, when canning them, you’re applying heat which can cause the goods to turn rancid faster than they would have if left alone.

If you need to store dry goods for more extended periods, consider vacuum sealing. It’s safer, doesn’t heat the items shortening the shelf-life, and it leaves the nutritional value alone too.

When applying heat to dry goods, it can decrease the nutritional value in the foods as well, which again defeats the entire purpose.

Foods You Can Oven Can 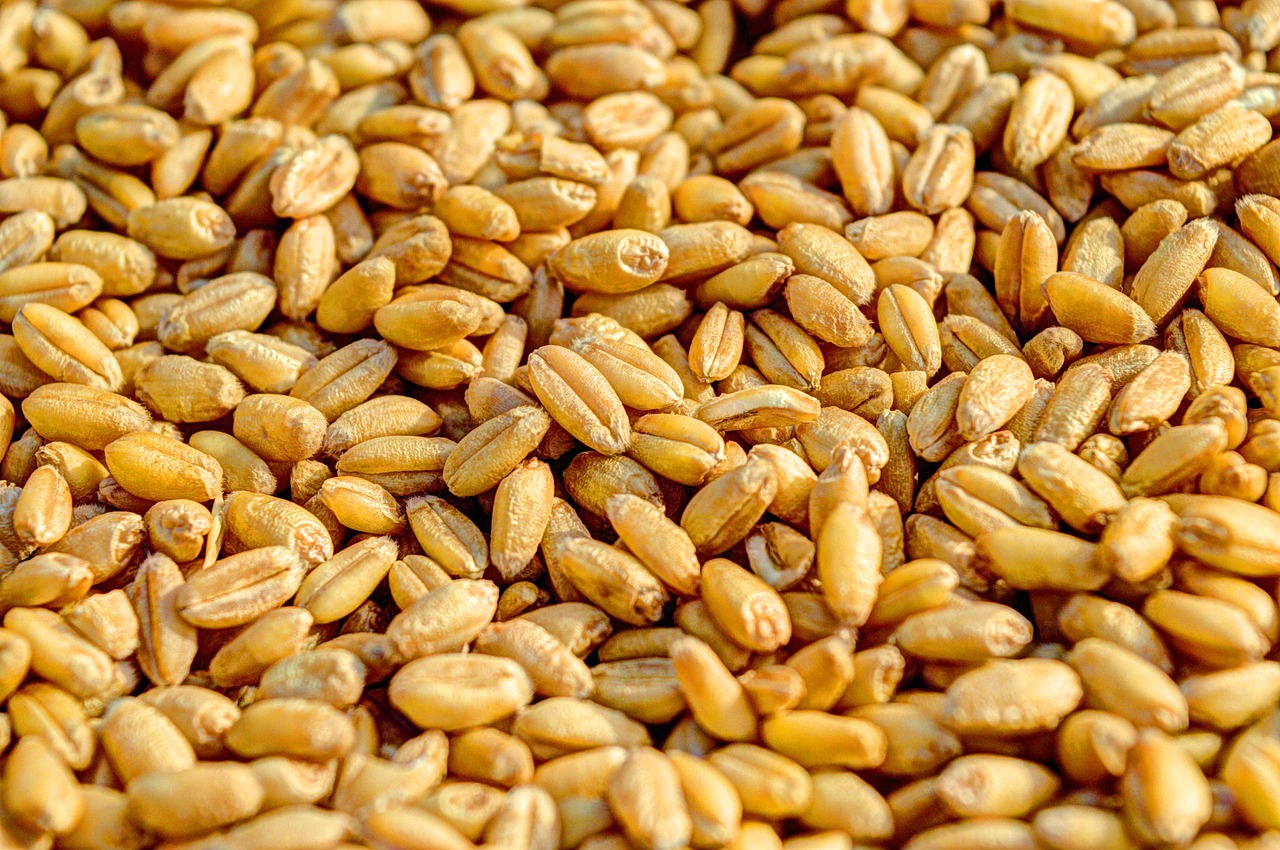 By now, I’ve stated multiple times we DO NOT stand behind oven canning. Many people understand the risks and still decide to proceed with this method of preserving food.

If you happen to be one of them, it’s important to know there are only certain foods which will hold up to oven canning.

The foods which can be preserved through oven canning are those which contain less than 10% moisture, such as:

Food You Shouldn’t Oven Can

If you’re still on the oven canning bandwagon, you should also be made aware of foods which shouldn’t be oven canned for any reason. Those foods are:

Cornmeal will turn to mush under too much heat. Nuts have an oily outer coating which is known for being a great hiding spot for mold and bacteria spores.

Also, seeds and barley can turn rancid when put into direct heat. Therefore, it’s doubly not a wise idea to oven can these items.

How to Oven Can

Oven canning has been something leaving the internet divided. It’s the opinion of some the risk is worth it because it’s an easier canning method.

While others (like myself) find it safer to take the extra steps of learning how to water bath or pressure can and thereby avoid falling ill from home canning.

For informational purposes, I’ll share with you how oven canning works. Still, it isn’t an encouragement for you to give it a try, but instead, hopefully, it’ll offer greater understanding as to why this method doesn’t seem as safe as other food preservation methods.

Here’s how to oven can:

To get your jars ready to begin the canning process, be sure to wash them in warm, soapy water. They’ll need to be rinsed thoroughly and dried as well.

It doesn’t hurt to sanitize the jars before filling them. They will be in a hot oven which should, in theory, sanitize them in the process of canning.

However, if you’re a safety person when it comes to home canning, you may want to consider placing the jars in your dishwasher on the sanitize setting or pop them into your oven to be disinfected.

The temperature is up to you, but be sure you give the oven ample time to preheat before starting the canning process.

While you’re waiting on the oven to preheat, begin filling your jars with the food you wish to preserve. Leave ½ inch headspace at the top of the jar.

If you’re canning a food which has been cooked, be sure the food is fresh from the stove. This will make it easier for the foods to reach boiling during the canning process.

Place the filled jars on a cookie sheet, and put the jars in the oven. Allow the jars to bake for at least 60 minutes. If you can allow them to process longer, please do.

Be sure to set the timer once the jars are in the oven to keep an eye on them as they process and also to give you an accurate count as to how long the jars were processed.

After the jars have finished processing, pull the cookie sheet from the oven. Wipe the jars down with a moist towel to ensure nothing from the contents of the jar has boiled over and left a residue. This could draw bugs while the jars are being stored.

Once the jars are wiped clean, place a fresh lid on top. Use a ring to secure the lid tightly.

While the jars are resting, begin listening for a ‘ping’ sound. The ping sound will indicate the lids have sealed accordingly.

If the lids don’t seal, you must reprocess the jar with a fresh lid. Allow the jars time to cool off in an area which doesn’t get a ton of airflow. They should cool as naturally as possible.

When all the jars have cooled and are sealed, you’re ready to move on to storage.

Be sure to label the jars with the contents which are inside them. Also, include the date they were processed.

After they’ve been appropriately labeled, store them in a dark, cool, location.

Again, it’s important to note; oven canning can kill any bugs or eggs of bugs in your food. It’s also capable of removing any excess moisture from these low-moisture foods to help deter them from becoming stale.

However, it doesn’t get hot enough to kill bacteria or mold spores. Which is a serious safety concern and should be taken into consideration.

If you’re interested in learning other safer canning techniques, there are many resources available to help you along the way. 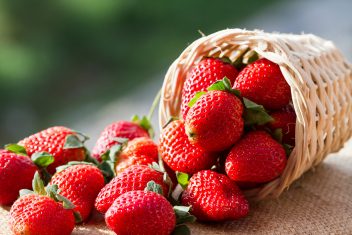 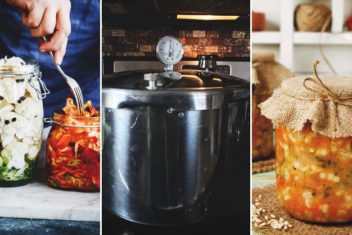 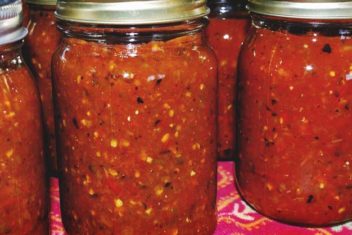 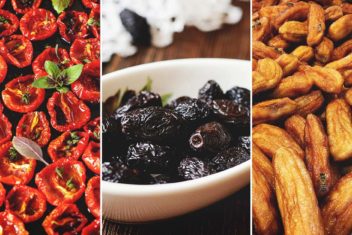 The Complete Guide to Sun Drying Fruits and Vegetables 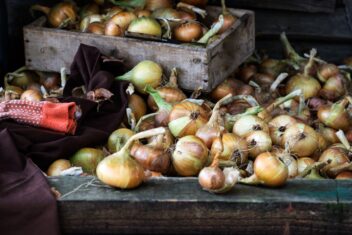 8 Tips for Storing Onions to Increase Their Longevity 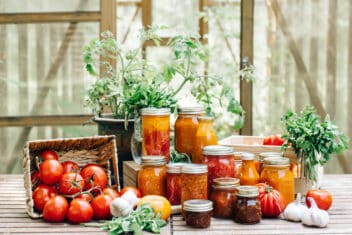 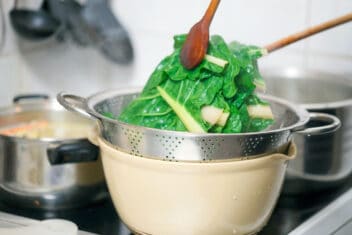 Blanching Vegetables 101: How to Blanch Veggies for Preserving 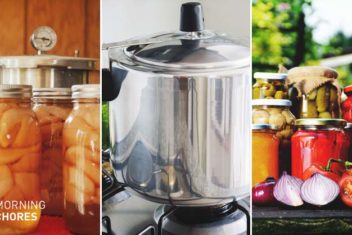 How to a Pressure Canner Correctly to Preserve Almost Any Food 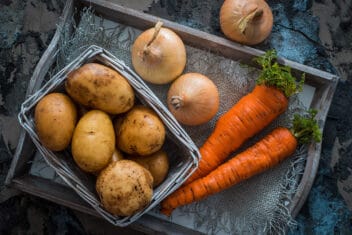 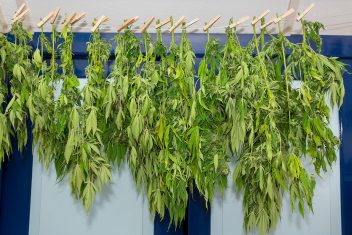 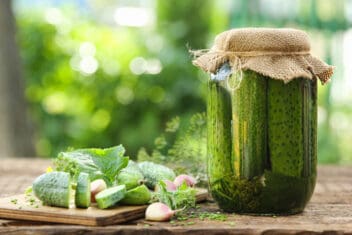