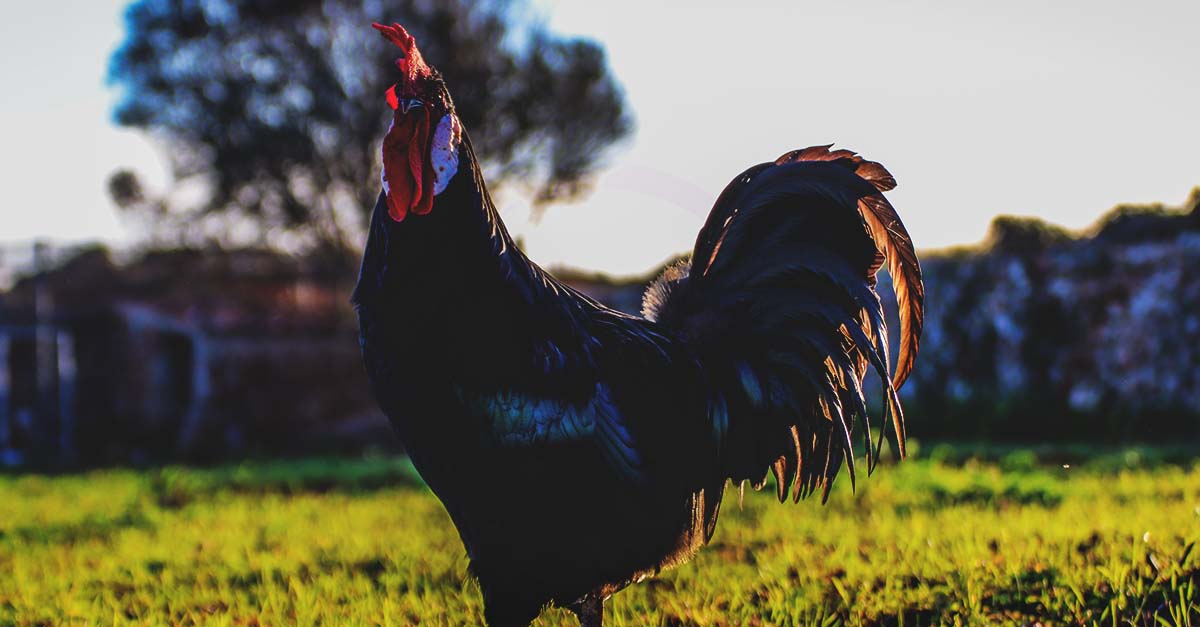 If you are interested in this chicken’s sister breed, the White-Faced Black Spanish, you may have heard of Minorcas.

Minorcas have been used in many breeding projects and played a large part in the gorgeous dual-purpose breed, the Black Australorp. Anyone who has seen the Minorca has probably kept the clown-like image in their head because they don’t have a forgettable face due to their large white earlobes.

This fascinating chicken has been around for well over a century and a half, although it was only accepted into the American Standard of Perfection in 1888. British people found the original stock for this chicken on the island of Menorca, part of the Balearic Islands near Spain.

There are several different varieties of the Minorca accepted into the American Standard of Perfection. Some Minorcan varieties proudly sport single combs and some carry rose combs on their heads. Black and White Minorcas have been accepted in both rose and single comb varieties, as well as the single combed Buff Minorca.

Minorcas are nice, medium sized chickens that aren’t too big. Hens weigh in at about 7.5 pounds when fully mature. A full-grown rooster generally tops out somewhere around 9 pounds.

The temperament of Minorcas can vary a decent bit depending on how much human interaction they receive during their adolescent years.

Generally, these chickens are a bit flighty, as are many Mediterranean chicken breeds. In addition to their flightiness, this is a very talkative breed and you will always hear them clucking around the yard.

Although the Minorca was crossed with many chicken breeds over the years, egg production still isn’t phenomenal.

Annual egg production rarely caps 120 white eggs per hen. While this isn’t terrible, if you are searching specifically for an egg producer, you can find breeds that lay up to 280 eggs per year.

As a slightly larger chicken, a dressed out carcass on this bird isn’t too shabby. However, the Minorcan is reported to have dry meat. Historically, chickens would be prepared with lard stuffed in the breast to moisten the meat.

Young chickens need to start off with a chick starter from hatch to 14-16 weeks of age. Around 14-16 weeks of age, it’s best to switch your young birds to a good quality laying feed to prepare their body for egg-laying.

Calcium supplements are a common need for laying hens if they aren’t getting enough calcium in their laying feed. You can remove the membrane from the inside of eggshells and crush the shells up to feed them back to your hens. Oyster shells are a low hassle option you can find at many feed stores.

Minorcas are adaptable chickens that do well in both confinement and free-range environments. Enclosed runs do need a minimum of 10 square feet per chicken, and the more space you can provide the better.

Inside your chicken coop, you need to provide 4 square feet of floor space per chicken. Each chicken also needs 12 inches of roost space. A good rule of thumb is to also include 1 nesting box for every 7-9 laying hens.

Since Minorcas are a Mediterranean breed, they are bred for extreme heat and do quite well in hotter climates. Shade and access to fresh water are always imperative for any animals in the heat.

Although adult Minorcas have full-on white fleshy faces, Minorca chicks look just like any other adorable fuzzy chick. If you want a fairly simple bird to breed without intricate feather patterns, you’ll find the Minorcas a convenient breed.

Mediterranean breeds are generally pretty small chickens due to the fact that they are meant to withstand heat. The less body fat, the easier it is to deal with heat. While Minorcas still aren’t huge chickens, they are the biggest Mediterrannean chicken out there!

If you’re looking for a fun lawn ornament, conversation starter, or show bird, the Minorca just might fit the bill!