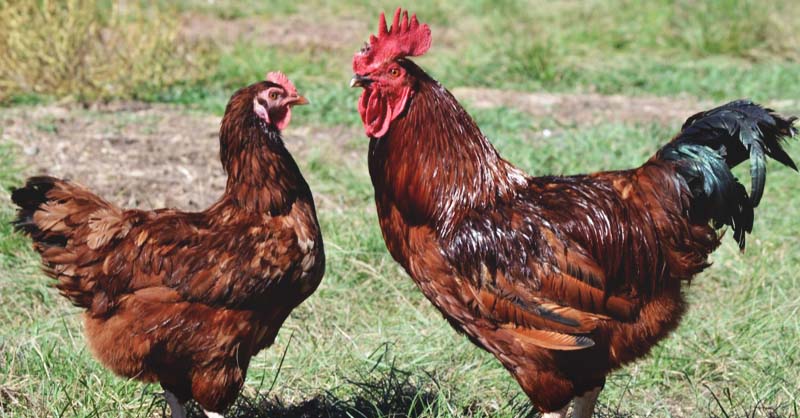 If you’ve been around chickens for very long, chances are you’ve heard of Rhode Island Reds.

These birds are a breed from Rhode Island and are incredibly popular in the chicken keeping industry. Well known for their egg and meat production qualities, many chicken keepers can’t imagine their chicken coop without them.

Rhode Island Reds were bred in the late 1800s and accepted into the American Poultry Association in the early 1900s. The main original stock for this breed was Malay chickens, which had been imported by sailors as they explored the world.

While these birds were originally bred for meat and egg production, only original lines still have exceptional meat production. In recent years, Rhode Island Red have been bred mainly for egg production.

Most modern-day Rhode Island Red chickens are smaller than the original heritage line of Rhode Island Reds. Average weight of a Rhode Island Red rooster is 8.5 to 9.5 pounds with hens a bit smaller, near 6.5 to 7.5 pounds. If you have an older line, your birds may be larger.

Rhode Island Reds aren’t exactly known for being laid back and docile. Roosters can have quite a reputation to be territorial and aggressive. Hens aren’t very aggressive, but they are a bit standoffish.

An older strain of Rhode Island Reds might have some occasionally broody hens, but most modern lines will have hens with a very low chance of going broody.

The main reason Rhode Island Reds are so popular is their excellent egg production. A single hen can lay between 260-280 eggs in a year. This breed is also popular for the size of their eggs, as produce large brown eggs.

If you have Rhode Island Red chicks purchased from a feed store or hatchery, chances are they won’t be a good bird for meat production.

I would recommend buying from a small scale breeder if you want a good bird for dual purpose uses. Small scale Rhode Island Breeders are generally passionate about preserving the heritage of the breed.

Rhode Island Red chickens from older lines will have good meat production, but they might be somewhat slower growing.

Rhode Island Reds are low maintenance birds when it comes to feeding.

Supply your chicks with a good quality chick starter for the first several weeks. Around 16-18 weeks of age, transition your young birds to a good laying feed. It’s also good to supply an additional source of calcium such as oyster shells in a separate dish so your hens can eat it as needed.

Maintaining your flock well by keeping a clean coop, not overcrowding, keep a good dust bathing area and keeping a watchful eye on your birds will go a long way in prevention.

Breeding Rhode Island Reds can be a profitable hobby if you are breeding an older heritage line because many fanciers are interested in maintaining this breed.

Rhode Island Reds are also commonly used in crosses such as red sex links and do well in hybrid breeds.

Cinnamon Queen, Red Star, Production Reds, these birds go by many names but they are all the same bird. These birds are a cross between two purebred chickens, creating a chick that can be sexed based on its down color at hatch. Red Sex Links are fantastic layers and do very well in a laying flock.

Australorps have the same meat production qualities as Rhode Island Reds, but they do have better egg production.

These chickens have much better temperaments towards people than Rhode Island Reds might, as well as making excellent mothers.

In 1988, a monument was placed in Rhode Island in honor of Rhode Island Red chickens and the farmers that bred them.

Despite the fact they aren’t the friendliest birds, Rhode Island Reds are very popular chickens with a reputation for excellent egg production. With their spunk and peppy attitudes, Rhode Island Reds will do well in any flock and you’ll love the addition to your coop.