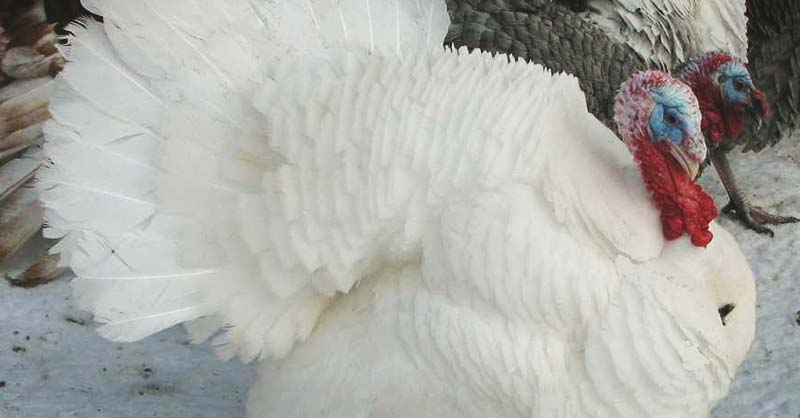 White Hollands turkeys are a unique variety that is slowly disappearing and bred insufficiently to maintain the original standard of the variety. This is a large turkey, good for meat production and also a breeding project bird.

Many people raise the White Holland as an alternative to the more commercial and mainstream Broad Breasted White turkey.

This turkey originated in England and it became the primary meat producer up until the 1950s. The White Holland declined when it was crossed with the Bronze turkey, resulting in the Broad Breasted White turkey.

After the Broad Breasted White took over and dominated the meat industry, White Hollands declined a decent bit. At this point, White Hollands are listed as threatened by the Livestock Conservancy, and the original standards are not upheld in the breeding of this bird.

The White Holland turkey is not as small as a Midget White, but not as large as the Broad Breasted White. Full-grown live weight of a White Holland tom is about 33 pounds. Hens weigh in significantly smaller, at 18 pounds.

Overall, White Hollands turkeys are a docile and friendly breed. However, the temperament of White Holland is somewhat dependent on the selection by breeders. Breeders have been known to select for both aggressive and docile temperaments, so researching your lines is a good idea if you want to know what you’re getting into.

White Hollands work well for meat production, and produce a nicely sized carcass. White feathered birds also dress out well because the skin looks neater and cleaner. Market weight is between 16 and 25 pounds.

Young turkeys are rapid growers and need more protein than most poultry types. Supply your poults with a 30% protein starter until your poults reach eight weeks of age. Once your poults are eight weeks old, transition them to a good flock raiser with 20% protein, but high-calorie content.

If you are raising your turkeys for meat, you can keep your turkeys on this flock raiser until butchering time. However, if you have turkey hens laying eggs, it is best to put them on game bird laying feed during laying season.

If possible, keep your male turkeys on flock raiser while your hens eat the laying feed. When your turkeys are not producing eggs, you can put the whole flock on flock raiser.

As a heritage breed, White Hollands are good at foraging and thrive in free-range environments. Free-ranging turkeys have more peace of mind than you might have with chickens because turkeys aren’t as susceptible to common daytime predators such as hawks.

Inside your coop, provide 8-10 square feet per adult bird to make sure everyone has adequate space. When it comes to providing roosts, take care to place them no more than 18 inches off the ground.

Jumping off high places for large birds such as turkeys can cause leg and feet issues. Outdoors, take care to provide a half-acre of space for every dozen turkeys.

White Holland turkeys aren’t specifically susceptible to any health issues, but blackhead is a common health issue that affects many turkeys.  Learn the signs and prevention for blackhead so you can maintain a healthy flock.

Chickens aren’t as susceptible to blackhead as turkeys are, but they can be carriers of the parasite and get turkeys sick. If you own both types of poultry, it’s recommended to house them separately.

Keep a close eye out for internal and external parasites on your turkeys such as worms, mites, and lice. Make sure they have plenty of dust bathing space to rid themselves of the pesky critters.

Breeding programs have been tossed by the wayside over the years and in turn, has resulted in some low-quality breeding lines. When breeding White Hollands, get your hands on a copy of the varieties’ standard and work as closely to the standard as possible.

With some careful selective breeding from some dedicated breeders, White Hollands can return to their original glory and recover from their endangerment.

The White Holland turkey is just a few years away from being completely merged with the Broad Breasted White as the same variety. Although the White Holland is known for having shorter legs, smaller breasts, and overall hardiness, there aren’t many breeders working to maintain the distinguishing characteristics of the White Hollands in their original form.

This turkey makes a fantastic bird for a homesteader after a slightly more natural turkey and a larger carcass. The breeding opportunity that White Hollands offer is also a great project for a dedicated poultry breeder.