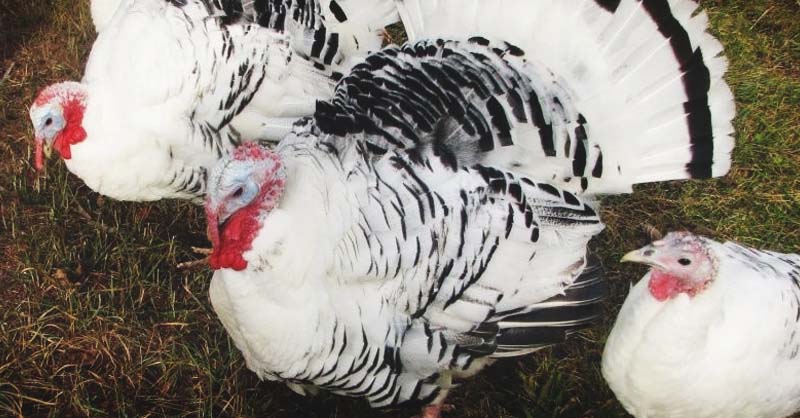 This gorgeous variety of turkey is arguably one of the prettiest out there, and for a good reason. Unlike most turkeys, the Royal Palm is primarily an ornamental and exhibition variety. This bird is far too small to be used for commercial meat production, although some smaller scale farms will raise the Royal Palm turkeys for meat.

In Lake Worth, Florida in the 1920s, Narragansett, Bronze, and Black turkeys were crossed along with some native turkeys to bring about this variety. In 1971, the variety was officially accepted into the Standard of Perfection with the American Poultry Association. Since then, the Royal Palm has flourished in the show industry, loved by many poultry exhibitors.

Part of the reason this variety is not raised mainly for meat is due to their petite size (for a turkey.) A full-grown turkey hen only weighs 10-12 pounds, which isn’t any more substantial than some fully grown roosters. Tom turkeys weigh between 16 and 22 pounds, which still is fairly small compared to other turkey varieties such as the Bourbon Red.

You can get a different response on the temperament of Royal Palms from every turkey keeper you ask. At the end of the day, a decent bit depends on how the turkeys are handled and raised.

Many turkey keepers have reported very friendly birds from their hand raised and coddled Royal Palms while other turkey keepers like to refer to them as “Royal Pains.” In the end, I think a significant factor for the temperament of any animal is how socialized they were from the very beginning of their lives.

The primary use of this turkey variety is showing at fairs and poultry shows. The size of these turkeys makes them easier to transport and handle regularly. Raising show birds requires a bit more maintenance than raising turkeys for other purposes such as meat. It’s imperative to keep your turkey clear of parasites and avoid all potential disease opportunities. Birds with even the smallest issues such as lice are not allowed at shows due to biosecurity reasons.

This bird has not been selected for traits such as growth and muscling that most meat birds are chosen for. That said, many homesteads raise these turkeys for their slow-growing meat because the birds don’t reach a considerable size and are therefore easier managed.

Because turkey poults are rapid growers; they’ll require more protein than some poultry types. Poults will do best on a 30% protein starter until they reach eight weeks old. Once your young turkeys reach 8 weeks old, switch them to a good flock raiser with 20% protein and high-calorie content. Turkeys can remain on this flock raiser until it comes time for butchering if that’s their intended purpose.

If you have a flock all year, this means turkey hens will lay eggs. It’s best to put turkey hens on game bird laying feed during laying season. Generally, try to keep tom turkeys on flock raiser while turkey hens eat the laying feed if possible.

If you can’t keep tom turkeys on a different diet than the hens, it’s not the end of the world. During the season when your turkeys are not producing eggs, the whole flock will do just fine on a flock raiser.

Turkeys do pretty well as free rangers because they are larger and less susceptible to daytime predators such as hawks. Many poultry keepers choose to free range their turkeys because it saves them copious amounts of time and money in fence materials and installation.

Inside your coop, 7-9 square feet per adult bird is adequate to ensure everyone has plenty of space. This is a bit smaller than you might provide for a larger turkey such as a Bourbon Red, but since the Royal Palms are smaller, they don’t need as much space. When building roosts, make sure to place them no more than 18 inches off the ground. Hopping off high places for large birds such as turkeys can cause leg and feet problems.

During the day, your birds will need a minimum of a half acre per every dozen turkeys.

Royal Palm Turkeys are not any more susceptible to health issues than the next turkey, but there are some everyday things to keep an eye out for in your flock. It’s a great idea to familiarize yourself with common (and the uncommon ones because you never know) diseases so that you can keep your eye out for them.

If you are exhibiting Royal Palm turkeys, maintain high biosecurity and quarantine practices to avoid bringing home an illness from a poultry show.

Due to the smaller size of the Royal Palm, they are able to breed naturally, instead of via artificial insemination, like the Broad Breasted turkey requires.

When breeding a bird that is used primarily for show, it’s important to only breed turkeys with desirable traits for showing. Study the standard of perfection for the variety so that you can breed for the correct marking and other traits.

The Midget White turkey is another small turkey variety well suited to homestead life with limited space. This turkey is about the size of the Royal Palm, but selected for some meat qualities that the Royal Palms do not have.

This variety is listed as threatened by the livestock conservancy. This means that there is an estimated global population of less than 5,000 Royal Palm turkeys.

If you are interested in turkey conservation, or preservation, this makes a fantastic project bird. Any individual interested in showing a turkey would definitely want to look into the Royal Palm. This is an all-around great turkey that belongs on all homesteads.